Real Madrid to offer Hazard to Liverpool in talks for Salah

"My objective is clear. My dream is to coach in the Premier League. That's my aim, that's my personal dream," says Radhi Jaidi when asked by Tribalfootball about his future goals in management.

Such statements should not come as a surprise to those who followed Jaidi's playing career. It was a fierce and determined mentality which lead Jaidi to where he is today. It is why he won over 100 caps for Tunisia. It is why he earned a move to Bolton Wanderers in the Premier League at the age of 29. And it is why when the opportunity came to leave Southampton U23s for USL club Hartford Athletic, he took it with both hands.

Jaidi has not cut ties with Southampton completely. His move to America is 'part of a 12-month secondment' from the Saints aimed at creating a long-term partnership across the Atlantic. Hartford will get the opportunity to learn from a Premier League outfit and sign their players - Tyreke Johnson arrived on loan in February - while Jaidi takes that first step on his senior management journey.

"It is a good challenge for me to prove myself, but also to help both clubs come together," Jaidi tells Tribalfootball. "One of the things I started with is hopefully to influence some players to come and be involved with Hartford. The arrival of Tyreke Johnson I think forms a successful movement forward to build that bridge between both clubs.

"Obviously with this period (the coronavirus lockdown) it is difficult to make connections, but we are in touch with Southampton on a daily basis, with the coaching staff trying to learn and bring both parties close to each other."

It hasn't been an easy transition for Jaidi given the recent coronavirus pandemic. The USL were forced to suspend their season - which has now been pushed back to May 3 - just two days before Hartford's opener with New York Red Bulls II. The momentum built over preseason, which included six wins from seven matches, was suddenly squandered. The situation was compounded for Jaidi when his family were forced to cancel their April 1 trip to join him in America.

Jaidi remains safe in Connecticut despite Hartford being only a two-hour drive from New York City, currently the coronavirus epicentre of the United States. He says a normal eight-hour routine has helped the solitude, passing the time with exercise, movies, reading, FaceTime with his loved ones, and of course, coaching through the internet. This includes regular meetings with staff and players to analyse video, as well as working on attacking and defensive tactics.

"It's been a good learning environment despite not going out as a group," he says. "But we are still learning from it and we always add something new to our schedule.

"There is a limit, we are limited, but we try to be proactive and creative to a certain extent.

"I've been in the centre of that with the staff I have, and each one of us tries to pull the triggers and bring something new to keep the players going." 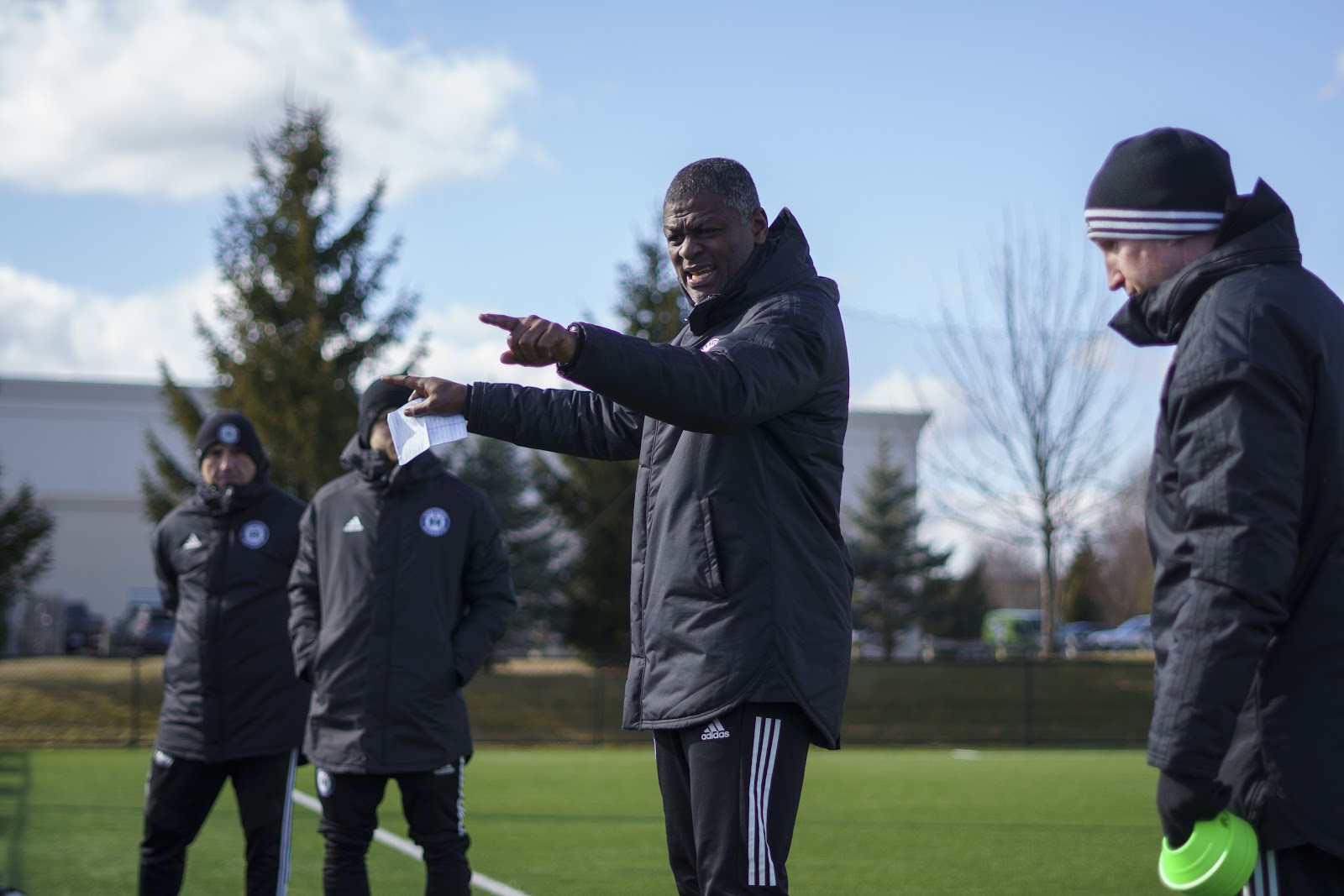 The 44-year-old has been tasked with turning Hartford into a competitive team after they finished bottom of the Eastern Conference with 21 losses from 34 matches in their debut USL season. He has identified "football understanding and football knowledge" as key areas where USL players must improve. Fortunately for Hartford, Jaidi possesses both in abundance from a career that begun with Tunisian giants Espérance Sportive de Tunis in 1993.

An imposing 6ft 4in centre-back, Jaidi was perfect for the Premier League and he finally left his homeland to join Bolton in 2004 after winning the African Cup of Nations earlier that year. He became the first Tunisian to play in the English top-flight and scored an incredible 8 goals from 21 appearances in a debut season which saw Sam Allardyce's men finish sixth and qualify for the UEFA Cup. He also competed at two World Cups and won the African Cup of Nations with Tunisia in 2004.

Jaidi remains a folk hero for the Wanderers, Birmingham City and Southampton, the three clubs he played for across eight seasons in England. He spent three years at St. Mary's, winning the Football League Trophy in 2009, before retiring in 2012. It was during these twilight years within the Southampton dressing room where Jaidi first noticed his future path.

"Alex Oxlade-Chamberlain was actually sitting next to me in the changing room. And that's where I started to discover that I have a little talent to manage the younger players and give them advice, as I was experienced, I think I was 34, 35, so my career was coming to an end, but I started to feel I had some experience that I needed to transfer.

"Oxlade-Chamberlain was one of the younger boys in the changing room, same as Adam Lallana and Morgan Schneiderlin. They were young so you feel like you have a duty to them, to show them or at least talk to them what they should do. And then Oxlade-Chamberlain was one of the kids that naturally was doing the right things, with a really great talent, he was quick but also good on the ball, technically good, and we were looking after him on the training ground.

"I know for example sometimes if he's a bit busy and dribbling a lot a defender might tackle him and send him to the physio room, but we were looking after them and taking care of them and we didn't think twice to give them the right advice to keep them on the right path."

Southampton was the perfect place for Jaidi to hone his coaching skills after he joined the club straight after retirement. Over the years Saints have produced such names as Alan Shearer, Matt Le Tissier, Gareth Bale, Luke Shaw, Theo Walcott, Oxlade-Chamberlain and Lallana. The list goes on and on. Jaidi worked his way up the ranks, earning coaching badges and learning from the first-team managers. Mauricio Pochettino and Ralph Hasenhuttl were the most impressive, he says, describing the current Saints boss as "authentic, organised, disciplined, demanding, winner."

It has been a steady but successful development process at Staplewood for Jaidi. He won the Premier League Cup with the U21s in 2015 and succeeded Martin Hunter as U23 coach in 2017. Last season he helped his side win promotion to the Premier League 2 First Division, cementing his reputation as a talented coach.

While Southampton are renowned for producing players, Jaidi reveals how the club place an equal importance on the education of their young coaches.

"It's not really something that is confirmed, but you feel it when you go there, you see it. Southampton invest a lot in the employees there in general, and ultimately the coaches. We go through a long learning and education process. Obviously one of them is the CPT, an internal CPT program.

"Once a month all the coaches gather together with the technical director and football directors, and we go through topics in the academy, or sometimes we have guest speakers who have some expertise in different fields and come and say their thoughts and advice to whatever topic we choose.

"Each coach has his own development plan. So they go through that with our line managers, then you can have feedback, you can have clear feedback on your development. I obviously went through that system, I have the opportunity to be around some experts in football and then I learned a lot since 2012 when I joined the backroom staff. Obviously I had a chance to be around the first-team managers, to see how they work and see how they coach on a daily basis.

"All this is something that takes part of my personality and character. I learned a lot from the managers who have been with the club and I feel it was the time for me to go and express myself at the senior level, that's why I came to the USL."

Hartford should also be excited about Jaidi's proven track-record of developing youngsters.

Michael Obafemi, Yan Valery, Tyreke Johnson, Marcus Barnes, Callum Slattery and Kayne Ramsay all won their first-team debuts while Jaidi was U23 coach. His former pupils Will Smallbone and Nick Vokins have since gained their debuts after his departure, an achievement which fills Jaidi with joy and pride.

Jaidi says the development process at Southampton begins when players are very young, with coaches teaching a philosophy that places equal importance on the emotional, social and mental maturation of players, as well as their footballing education.

An excellent example of the 'Southampton Way', Jaidi says, is through the resurgence of Luke Shaw at Manchester United.

After winning his Southampton first-team debut under Nigel Adkins at 16, the Red Devils paid £30m for his signature only three years later. Adkins and Pochettino both spoke publicly about Shaw's flaws, but their tone paled in comparison to the manner in which Jose Mourinho criticised the left-back during the 2017/18 season.

Shaw, however, never shied away from the criticism and vowed to prove Mourinho wrong, which he did, eventually lasting at Old Trafford longer than the Portuguese. He is now a regular under Ole Gunnar Solskjaer after showing immense resilience and character, traits which Jaidi believes Shaw learnt at Southampton.

"If you go and ask Gareth Bale, he will go back and tell you I had the best education during my time at Southampton, that's what makes them successful. It's that personal aspect that makes the difference.

"Same if you ask Alex Oxlade-Chamberlain, and I remember when he went to Arsenal, he still came back to our education department to finish his education, and he loves to come around Southampton still to see the old faces, same for Adam Lallana, who still lives in Southampton. So yeah, I think that's the magic about it, and Luke Shaw he is definitely one of our own."

An intimate knowledge of the Southampton ethos is only one aspect of what Jaidi will provide Hartford this season. Another is a playing career that spanned continents, included major trophies, World Cup goals and experience marking the likes of Thierry Henry and Didier Drogba.

Hartford players might be too young to remember those times, but that doesn't mean Jaidi will be flaunting his YouTube highlights.

"I don't like showing off or showing my things," he laughs. "But I made sure the players know about what are my strengths. I don't really need to say it. Players have come to me asking me how can we be good at heading, I said okay and I had to show them on the training ground.

"I give them some of my skills and some of the tricks, I was fortunate to apply them in the Premier League and be successful in certain games. So yeah, yeah I think the experience as a player it helps when you reach a level of your coaching ability, definitely it will help you."