It was just under 12 months ago when Corey Whelan found himself in a predicament common amongst young footballers. All he had known for the last thirteen years was Liverpool Football Club. Now the question was: where to next?

There were options. Whelan was a former U23 captain and had proved his senior mettle with loan spells at Yeovil Town and Crewe Alexandra. So it came as a surprise to most when the burgeoning relationship between Liverpool and Phoenix Rising culminated in an offer for the versatile defender, which after some hesitation, he accepted.

"Basically I spent 13 years at one club. There were ups and downs, there were great moments and not so great moments," 22-year-old Whelan explains to Tribalfootball. "There were times when I went on loan and it was really good and I enjoyed it.

"But just being around the first-team and getting a taste of it training wise, going away with them, it was just a little bit frustrating because I knew I couldn't get anywhere near it because of the players they brought in and how they've now gone to another level.

"It was frustrating for me in the summer, deciding where I wanted to go. I had a few offers that couldn't quite get over the line in England.

"Then Liverpool rang me back up and explained that they'd spoken to someone at the ownership at Phoenix and said is there any chance you'd want to go and experience it.

Fast forward to now and the former Republic of Ireland U21 international is relishing his time in the United States, even after a daunting transition period.

Conditioned to the mild summer months of England's north-west, Whelan arrived in Arizona at the start of August when temperatures can reach 40°C (104°F). He was also signing for a team who had taken the USL by storm, making his debut in a side who had won 16 straight matches.

Rising, whose co-owners include Chelsea legend Didier Drogba, would complete the greatest regular season in USL history, breaking numerous individual and team records. But they unfortunately couldn't win the championship after falling to eventual champions Real Monarchs in play-off semi-finals. It was a completely new experience for Whelan, one that he thoroughly enjoyed.

"I loved it. Obviously I was only in for a short stint of time, I played about 11 games in the end. It's frustrating this year because I wanted to kickstart and get 30 plus if not more games this year.

"Last year was a great experience. I came into a team that was doing well and winning, which always makes it a bit easier.

"The lads welcomed me in, I got a good run of games and got to play in an environment like the play-offs which I'd never done before, it was new to me. So yeah it was really good, I enjoyed it." 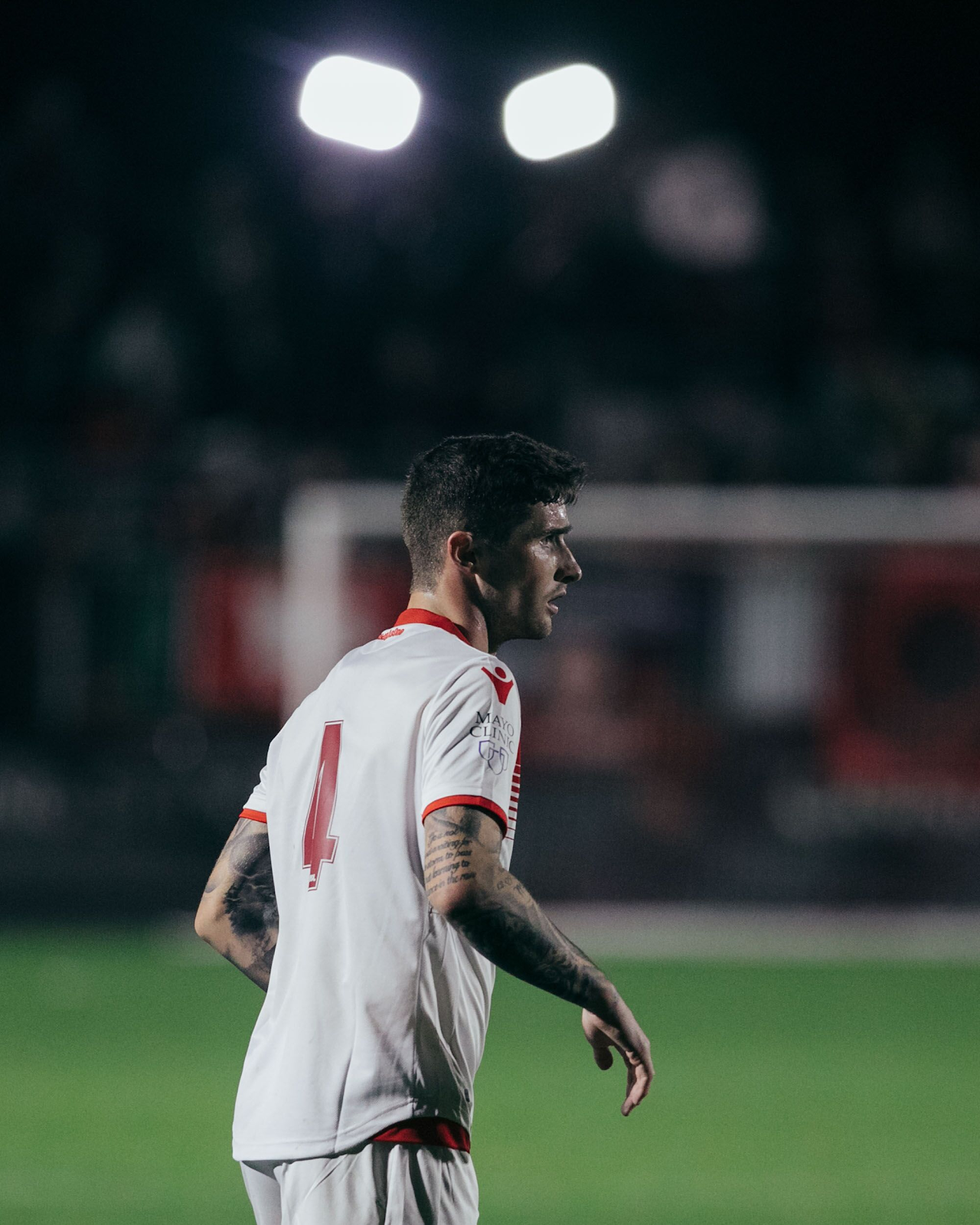 Football in America might be known for accommodating ageing stars such as David Beckham and Steven Gerrard, but there is a growing number of young English players who are using both Major League Soccer and USL to cultivate experience rather than fade into irrelevancy.

At the time of publishing there are 17 players across both leagues who were born in England, aged 25 or under and spent time at Premier League or Championship academies, according to Transfermarkt.

Inspired by his loan spells in League Two, Whelan says the allure of regular senior football was what drove his decision to cross the Atlantic.

"I could've signed maybe for a Premier League 2 team and done the whole U23 and gone back on loan. But I just wanted to enjoy a bit of structure in my life so I made the decision to focus on senior football and getting as many games as possible.

"That's a big thing for me, games. I feel like you're trusted more when a manager knows you've played games wherever it may be in the world. I think if you can do that then more and more success will come.

"You just need to put out there and know what it's like to survive. The first couple of games at senior level is about surviving as well as possible, then the games come and it becomes second nature.

"Every game is difficult and some are tougher than others, but once you've experienced what the real game looks like you kind of don't want to go backwards. You want to continue your career and hopefully go as far and play as long as possible."

The rigours of lower league football might have toughened Whelan, but it was Liverpool who honed his footballing education.

Having joined the club from Crewe at the age of nine, Whelan worked his way up the ranks in one of the most talented academy crops the Reds had seen in years.

When you read the list of Whelan's former teammates, it is a testament to his own ability that he was handed the U23 captaincy by Neil Critchley in 2017.

Ben Woodburn, Ryan Kent, Harry Wilson, Trent Alexander-Arnold and Rhian Brewster are just some of the names Whelan played alongside.

While one could easily presume that such a big club would have forgotten about a released player, Whelan reveals Liverpool remain in touch with him to this day.

"They gave me a load of incentives to go forward and make a career for myself so I thank the club for that and I'm obviously a Liverpool fan so I'm glad to see them doing so well at this moment.

"They really did prepare me for senior football, (for some people) it works out and some it doesn't for other reasons, may that be injury or falling out of love for the game, but they definitely put you on that pedestal and say 'listen if you're not here then we want you to have a career elsewhere'. And they keep in touch with you when you leave, which is the big one as well.

"They still keep in touch and look out for results and if they see we've done well then you'll get a text, whether that be from a member of the coaching staff or a player.

"I've still got mates that I'll talk too for the rest of my life. It was a really good time. I enjoyed it and they prepared me as best as they could for a career in football definitely."

Happy to sign another contract and continue my stay at this great club Thanks for all the support @LFCpic.twitter.com/W0QU9npE3n
— Corey Whelan (@coreywhelan1997) December 13, 2017

Whelan was also fortunate to work under the watchful eye of Reds manager Jurgen Klopp. The German arrived in 2015 and immediately became a regular visitor at U18 and U23 matches.

Towards the end of his Liverpool career, Whelan trained with the first-team on a number of occasions, most notably joining the senior squad in Marbella for a training camp last February.

While a senior debut never arrived, the experience of working with Klopp and stars like Virgil van Dijk will stay with Whelan throughout his career.

"It was a great experience for me. I learnt a lot from him (Klopp). He speaks to young lads, he treats everybody equal. He doesn't treat van Dijk any different to how he would a young lad.

"He's very good with player management and he knows what gets the best out of his players it was definitely a good experience working under him. He's obviously a manager that I'm proud to say he's coached me at some stage in my career.

"I trained with van Dijk quite a bit at the back end of my career at Liverpool. I went to Marbella with them before the Champions League final, and I got to experience and see it up close, which you can learn a lot from, whether it be a week being there or just the way he acts on and off the pitch, even down to the things he does when he's not playing, you actually take a lot from it."

The coronavirus pandemic has halted the momentum Whelan had built over preseason. He is now passing time with training, playing golf and Netflix, while FaceTime has allowed him to stay connected with family and friends back in the UK.

One thing for certain is Whelan remains focused on continuing the mission he started when he left his boyhood club last year.

"I've still got goals I want to reach, challenges I want to set myself, but right now Phoenix for me is a great club to be at. It's well ran, the ownership, the coaching staff.

"In the future I want to get to the top level because I believe if you push yourself and you work hard every day you can get there.

"I do miss playing in England because it's where I grew up. I obviously want to get to look to get back to that side of the world, but right now it's about helping Phoenix and playing week in and week out and getting the best out of myself that I possibly can.

"My aspirations in terms of my career is to play as many games and win as many things as possible, whether that be at Phoenix or whether that be further on in my career. I think players are judged on medals and trophies, so if I can achieve that I can look back and say I did the best I could."

If you'd like to find out more about Phoenix Rising, click here to read Andrew's interview with part-owner Brett Johnson.