Back then, Jose Mourinho was in charge and the club reigned not just in Italy but in Europe. Since then there has been a dramatic decline. However, Antonio Conte is currently overseeing a revival.

Conte returned to Italian club football in the summer after a one-season break following his spell at Chelsea, where he won one Premier League and one FA Cup winner's medal in two seasons. Previously he worked as Italian national team coach, guiding them to the Euro 2016 quarter-finals, and as Juventus coach, where he won three consecutive league titles.

His passionate touchline persona and intense tactical approach are welcome additions to Serie A, and Inter fans will be hoping he can transform their side just as he did Juventus before. The early signs are positive, with three wins from three in league action suggesting the Nerazzurri could challenge for the title this term.

A brief glimpse at the early numbers indicates Conte has already stamped his mark on Inter. Despite having played three teams in Serie A's bottom half in Cagliari, Lecce and Udinese, Inter haven't completely dominated the ball, averaging 59% possession – that's less than Bologna, Milan and Sassuolo. Their build-up is also mixed – they play the second-most short passes *and* the third-most long passes per game.

These stats indicate Inter aren't prioritising possession and are happy to not have the ball in certain situations, and that when they do have possession they combine short build-up with playing more directly. This all fits with the style adopted by previous Conte teams, as do the defensive data.

According to Understat, nine Serie A teams allow the opposition fewer passes per defensive action than Inter. However, only one – rivals and upcoming opponents Milan – allows the opposition fewer passes within 20 yards of goal. They're also conceding fewer shots on average than all bar Bologna. This is classic Conte: Inter aren't pressing concertedly, but they are difficult to break through when defending in their own half.

In Conte's three Serie A games in charge so far, Inter have lined up with a back three on every occasion. The only changes are that sometimes the system is a 3-5-2 with one defensive midfielder and two driving No.8s, and sometimes it's a 3-4-2-1 with two supportive central midfielders and two inside forwards off a lone striker.

The back three helps Inter to build up, giving them a numerical advantage versus the first line of defence in most matches. This allows them to transition the ball from one side to the other via the three centre-backs and look to play around the opposition. 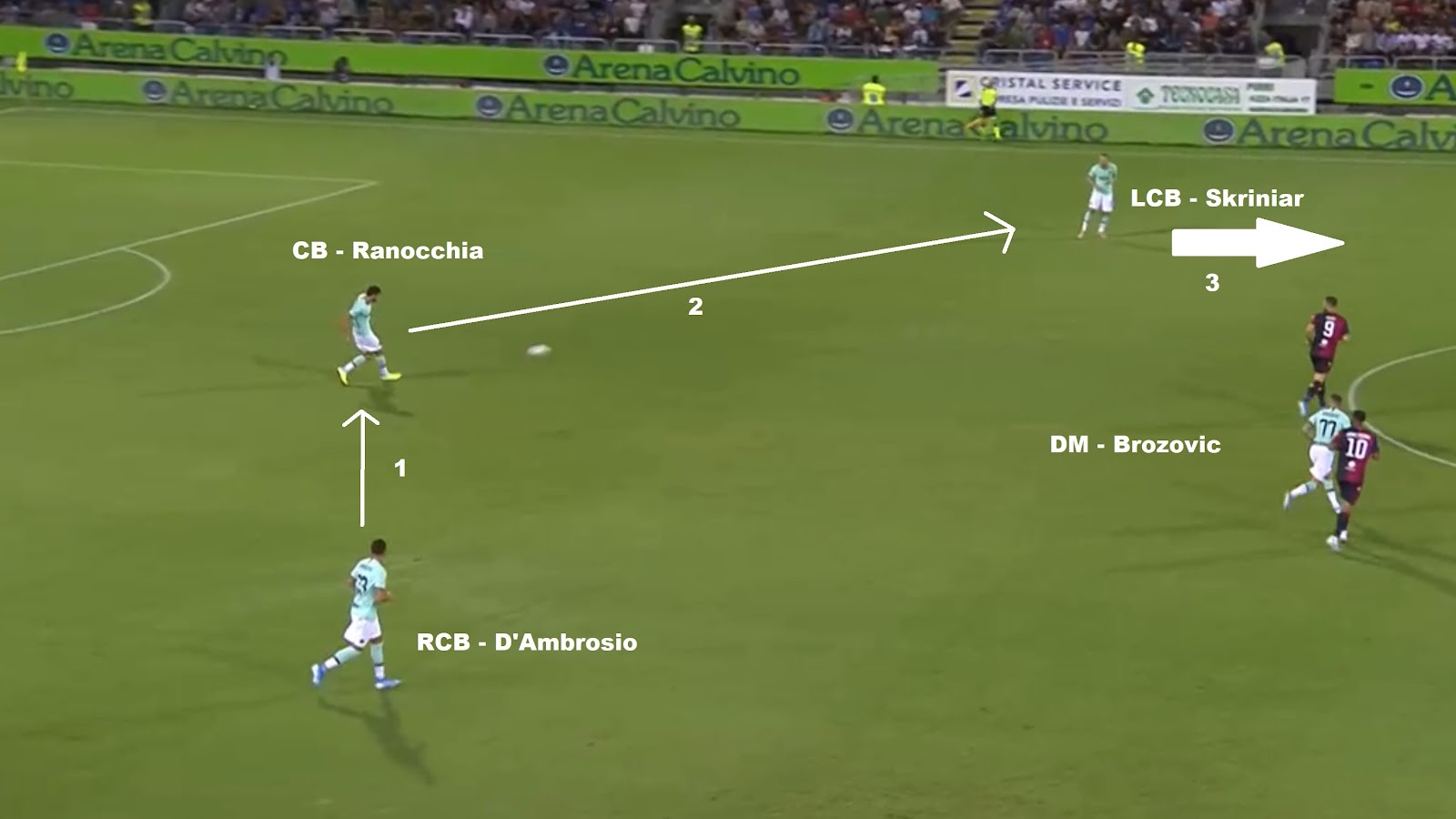 Inter like to go out wide to then come back inside, and can do this in a variety of ways. One way is for the centre-back to play to the No.8 on his side, who can then play a first-time pass round the corner for a striker before looking to receive the return pass and complete a 1-2. Another way is to go out to the wing-backs, who play similar round the corner passes into the frontmen. Below are a couple of examples of this.

Here, left wing-back Kwadwo Asamoah plays in to striker Romelu Lukaku, who lays off to fellow striker Lautaro Martinez (circled). This shows the potential for fast, co-ordinated combination play involving one striker facing away from goal to receive and the other diverting his run to face goal and take the lay-off. 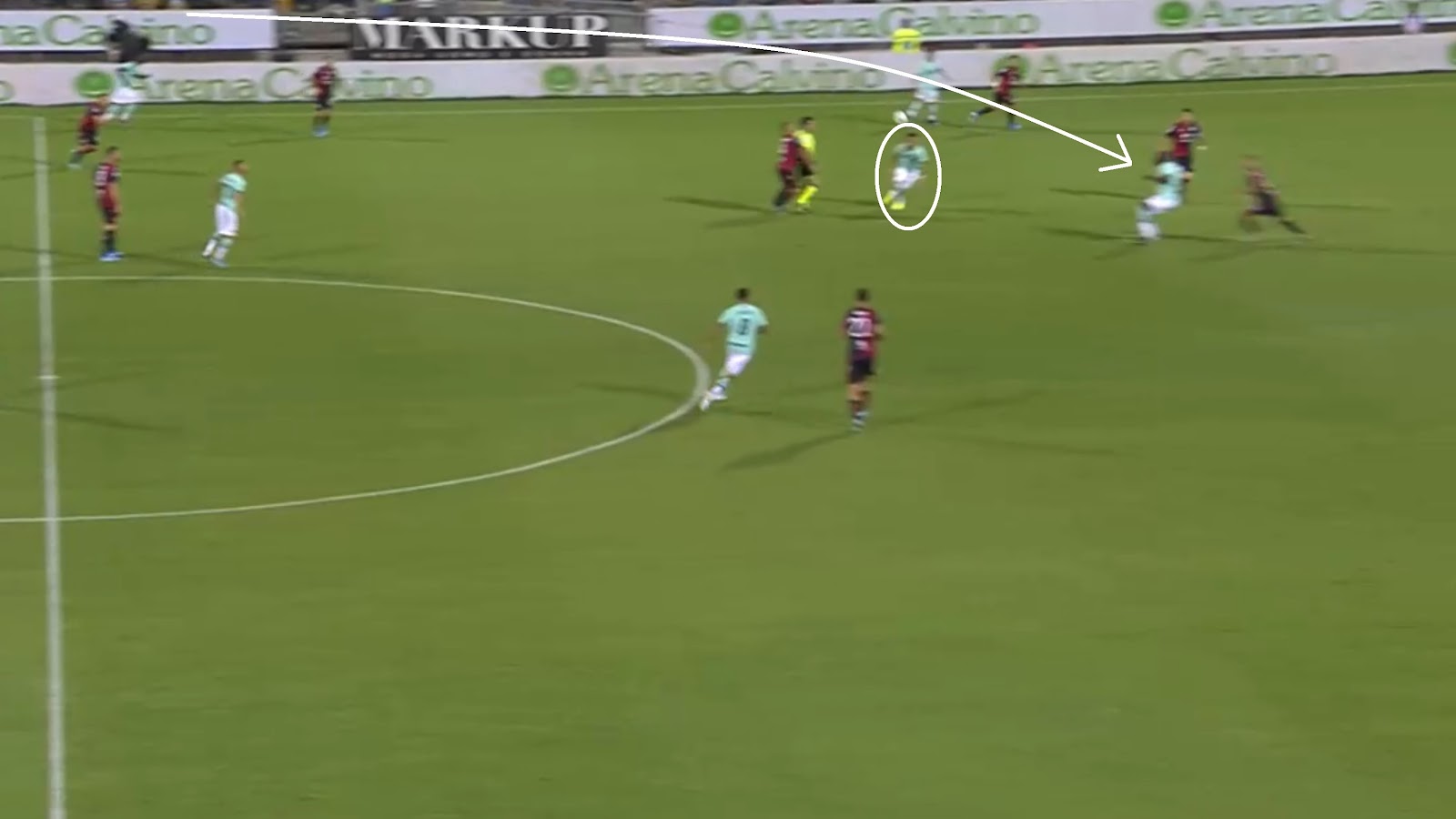 And here, Asamoah plays a diagonal over the top for the front three in the 3-4-2-1 to fight for. With Lukaku closely supported by Stefano Sensi and Matteo Politano, Inter have numbers to compete for the first and second balls. 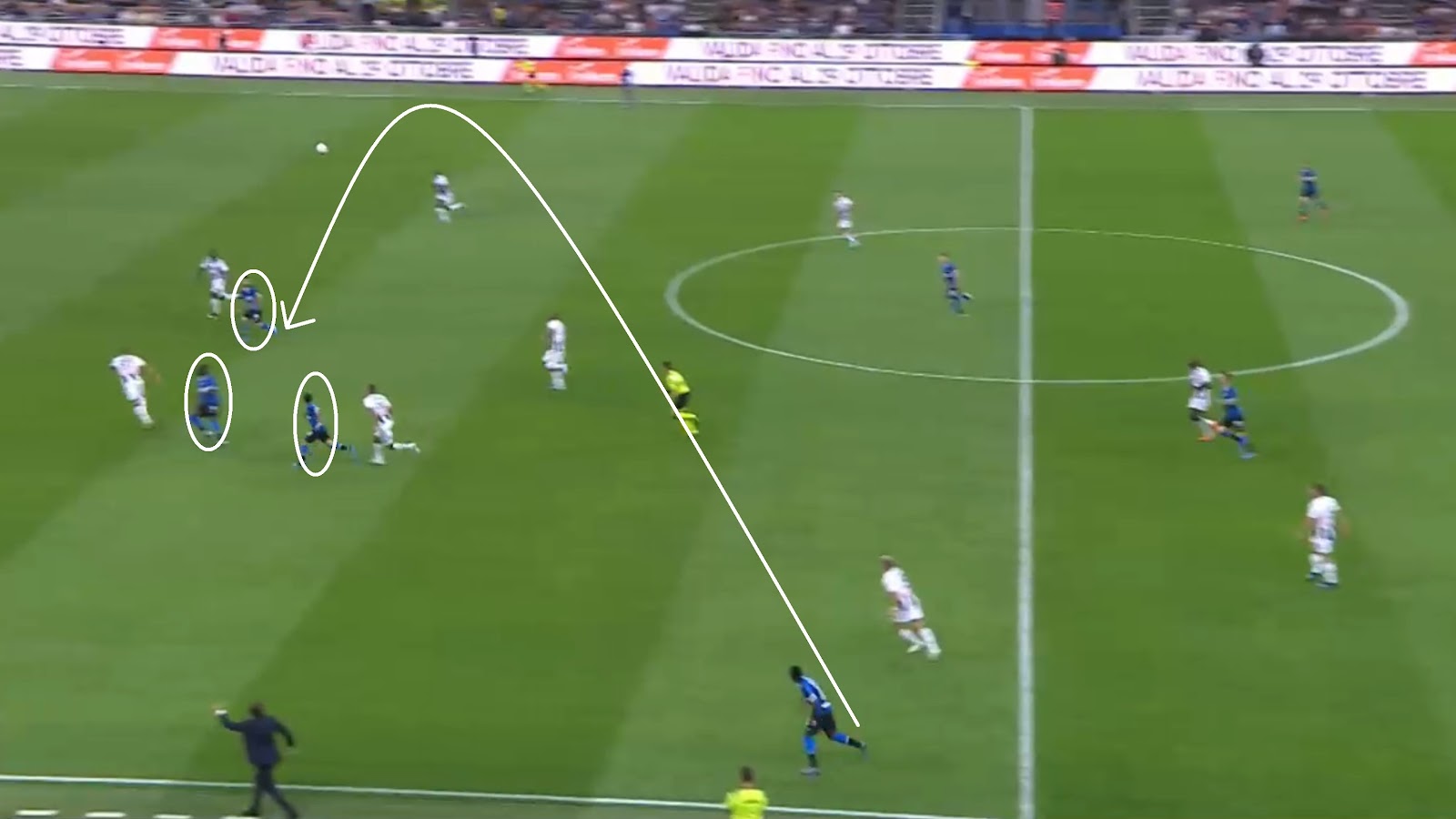 Conte's early preference of system appears to be the 3-5-2, which sees a lot of combination play between the No.8s, wing-backs and strikers. Conte has mentioned the qualities he appreciates in his 8s – Sensi, Matias Vecino, Nicolo Barella and Roberto Gagliardini – telling the press that "this team was built to play with midfielders pushing forward into the channels".

All of these midfielders are dynamic and hard-working; therefore, they are perfect for moving off the ball, providing third-man runs and attacking space. Below, Vecino performs a third-man run to get in the channel and behind the opposition back line. He initially lays off to the right wing-back, who passes inside to the dropping striker. The striker then plays a first-time through ball for Vecino, who runs in behind to cross. 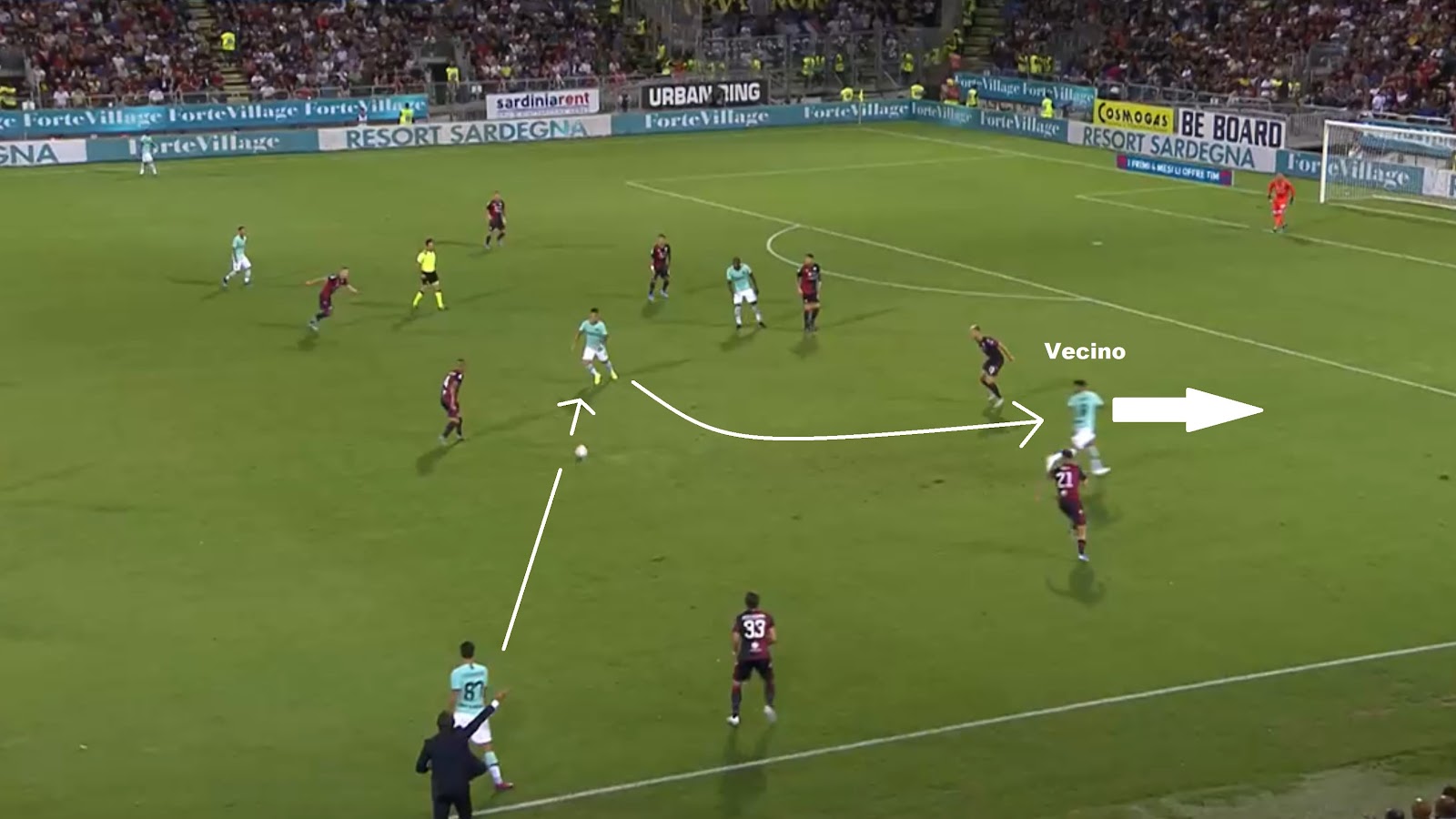 Defensively, the aforementioned numbers sum Conte's Inter up well. They don't press high often, but they are extremely well-organised in a low 5-3-2 or 5-4-1 block. If the opposition play sideways passes along their back line or out from goal kicks, Inter will take the opportunity to step up and close down man-to-man. Here, the strikers press the opposition centre-backs while Marcelo Brozovic steps up to cover the deepest opposing midfielder. 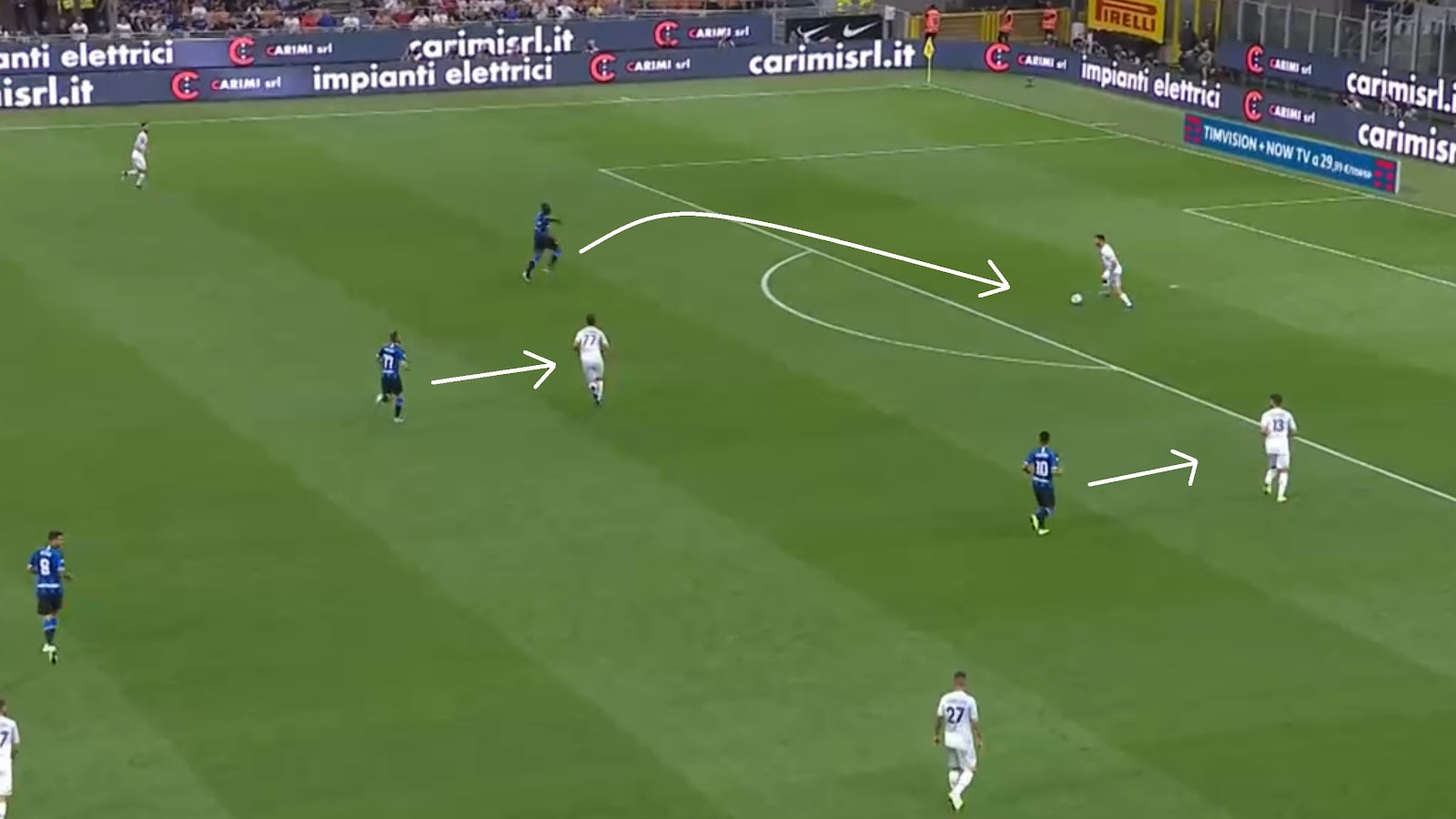 If they are winning comfortably or don't see an opportunity to press, Inter will settle into an organised low block with little gaps open on their midfield line to play through and the back five ensuring good numbers with which to defend their own penalty box. 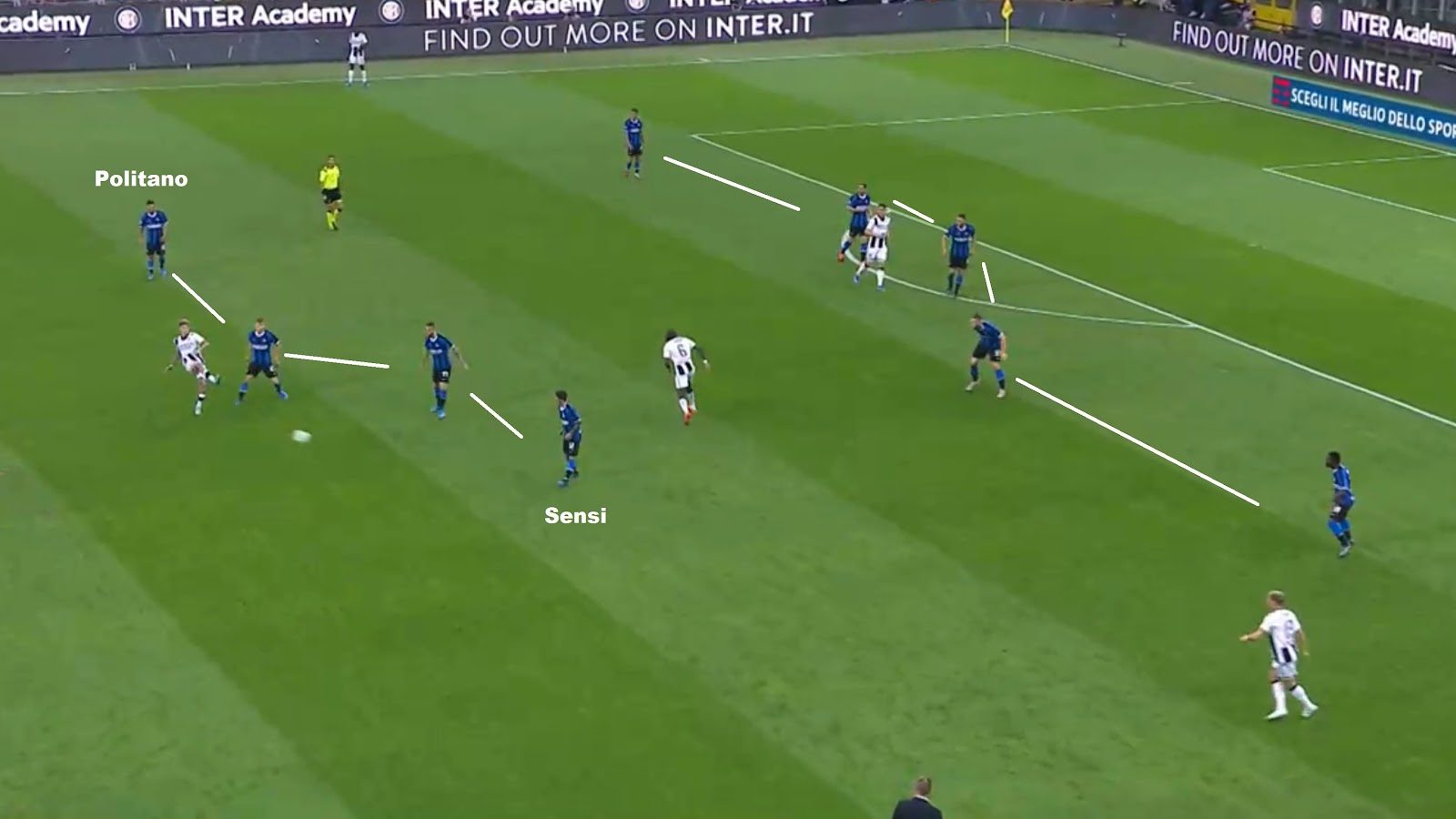 Inter's all-round game requires a high level of tactical understanding and drilling on the training ground. Their quick attacking play is based on pre-planned patterns that are then executed to a tee on the pitch. This gives Inter players the advantages of foreknowledge and efficiency through practise that can make it hard for opponents to cope.

But in order for this approach to work, there needs to be a positive marriage of coach and players. Fortunately, Conte has the right players in his squad to implement his ideas quickly. In fact, there are a number of similarities in the player profile between this Inter side and his old Chelsea one.

Conte's Inter are mirroring his Chelsea in terms of system, of play and individuals in specific roles. The greater challenge, however, lies in repeating the trick with results and winning a league title in Conte's first season in charge. This weekend's clash with Milan will be the first serious test of those credentials.

All data in this article is provided by WhoScored unless otherwise stated.