PSG chief Leonardo on Man Utd striker Cavani: He knew his cycle was over

Real Madrid versus Barcelona is widely accepted to be the biggest game in football. The rivalry between the two clubs usually makes for a riveting contest, but last weekend's edition of 'El Clasico' was more confusing than anything else. Many fans were surprised by the way the game unfolded. The tempo was slow and there was a seeming absence of shape. This confusion, however, was almost entirely the result of Real Madrid's game plan.

Zinedine Zidane set his side up with a man-marking defensive system that led to a transitional game with lots of subtle on-the-fly positional changes. It generally stunted Barcelona's possession, helping Real Madrid to a 2-0 win that sent them one point ahead of their rivals atop the La Liga table.

Quique Setien lined Barcelona up in a 4-2-2-2 attacking formation. Lionel Messi was joined by Antoine Griezmann up front, with both taking up reasonably fluid striker roles that allowed them license to roam. Arturo Vidal and Frenkie De Jong acted as attacking midfielders, while Sergio Busquets and Arthur sat in front of the defence. Full-backs Nelson Semedo and Jordi Alba were responsible for providing width, while centre-backs Gerard Pique and Samuel Umtiti started attacks alongside goalkeeper Marc-Andre ter-Stegen.

Zidane response to this was a defensive man-marking system that on paper looked like a 4-4-2 with Isco supporting Karim Benzema in pressing. But, in practise, the shape varied greatly from play to play.

This defensive approach placed a great deal of responsibility on the players to make individual decisions on the cuff and to win their 1v1 battles, but generally it worked out and forced Barcelona into non-threatening passes, ineffective direct attacks and turnovers.

An example of how quick decision-making underpinned Real Madrid's man-marking came in the seventh minute. Here, with Toni Kroos and Isco marking Barcelona's central midfielders, Vidal finds space in the inside channel. In most other situations, Marcelo would have followed him man-to-man, but Real's left-back was occupied by Griezmann, who had pulled wide right. 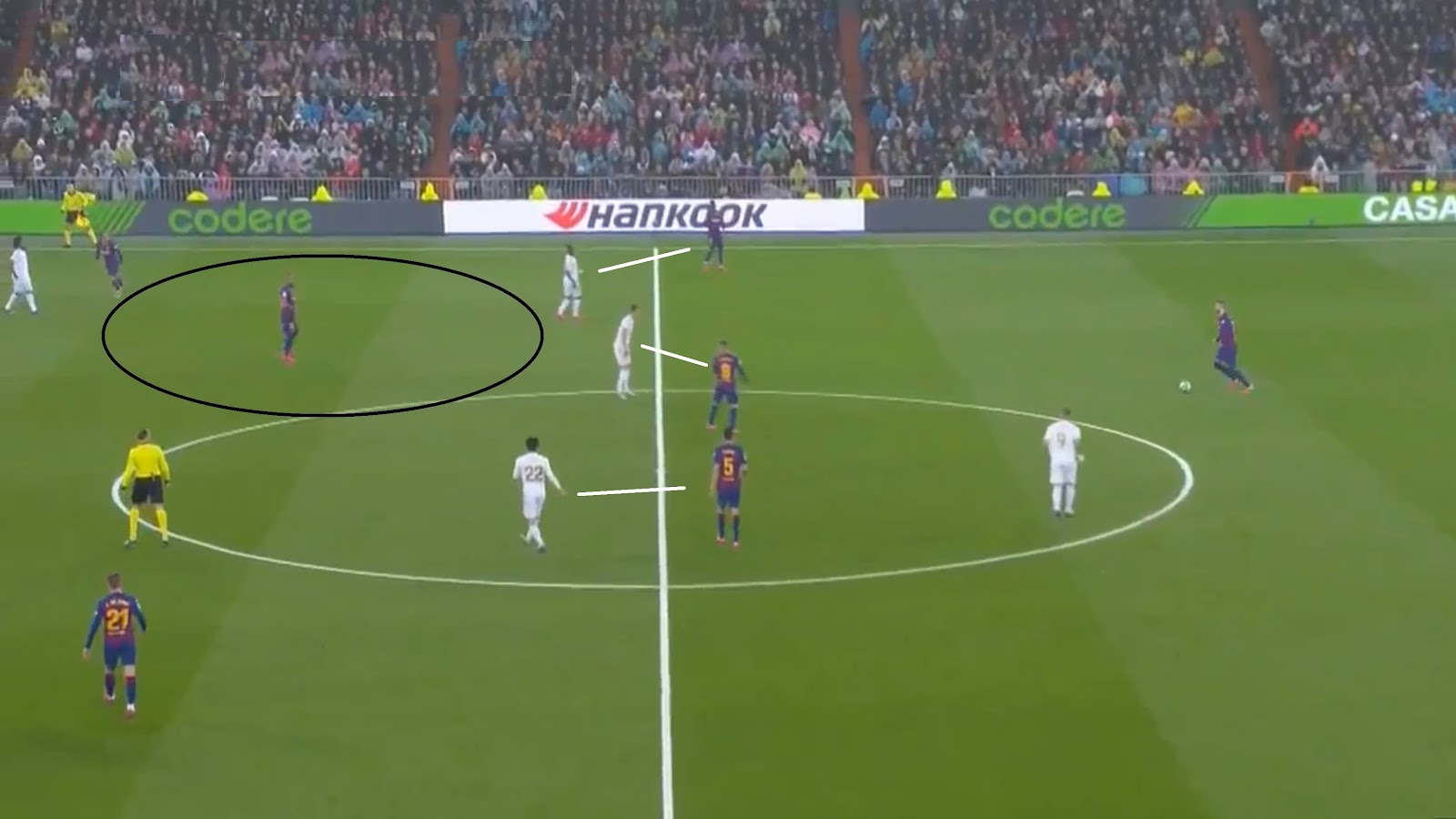 Vidal is found, but Sergio Ramos steps quickly out of the defensive line to close the Chilean down. Vidal stumbles under pressure, gives the ball away, and Barcelona's attack comes to an abrupt end. Ramos was able to rush out so decisively because Casemiro dropped back into central defence to cover for him. This early duel set the tone for the rest of the game. 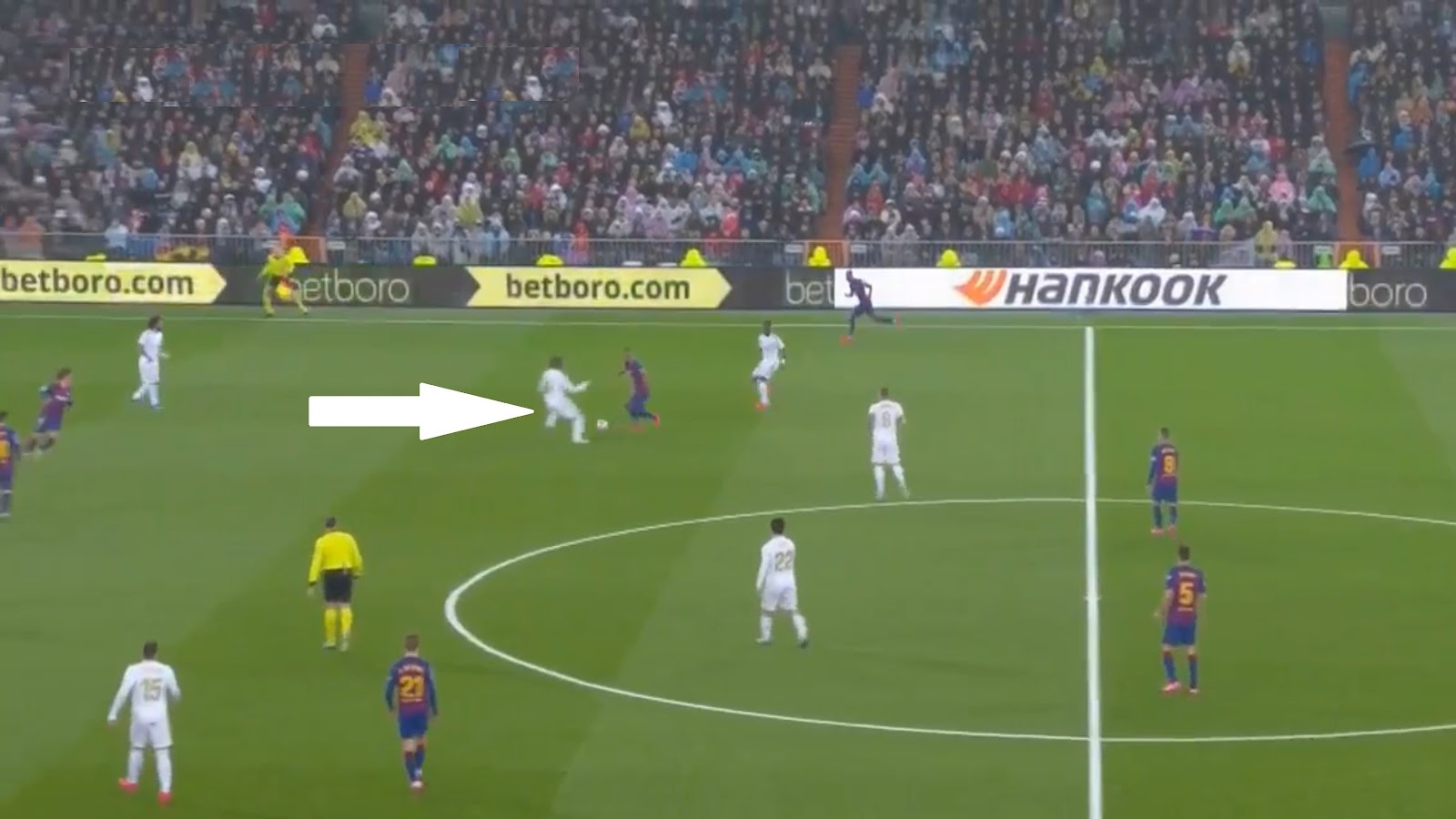 Whenever Barcelona tried to build possession, they were faced with a situation where every one of their outfield players was closely marked. Goalkeeper Ter Stegen was their only free man, and he rarely came under serious pressure from Benzema or Isco. As seen below, the Real Madrid front two were more concerned with removing safe passes out to the centre-backs. Ter Stegen had plenty of time, but no obvious short options. 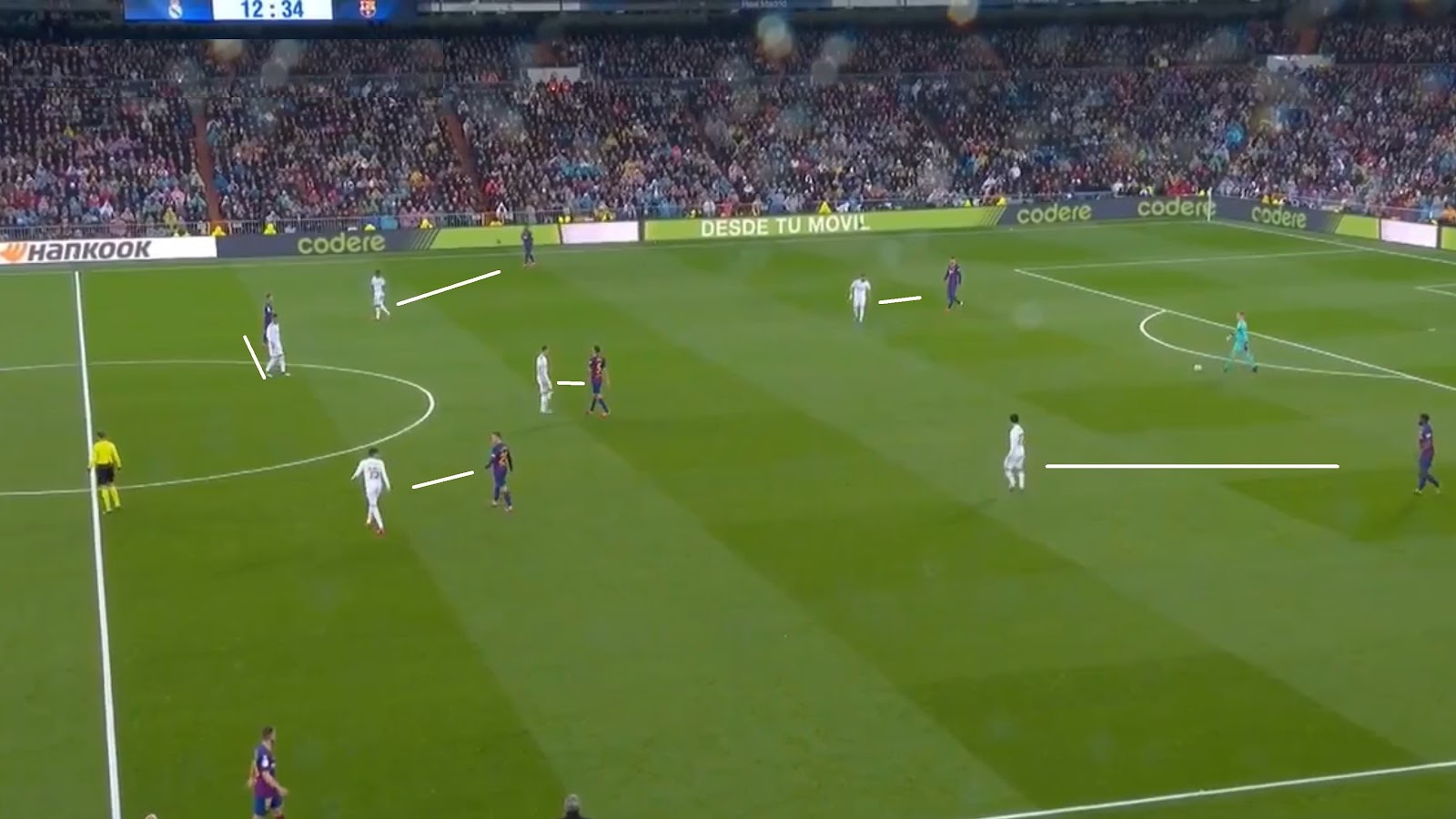 One way Barcelona tried to combat this was using a simple up-back routine to try and create a free man. Ter Stegen would wait, wait, wait…then the second Benzema or Isco closed him down he would pass to Busquets, who passed back first-time to the centre-back who had become free.

Worryingly for Barca, this pattern didn't work regularly as Real's front players instantly recovered their defensive positions after pressing Ter Stegen. Equally as worrying for Barca was that they didn't really have other answers to the questions Real Madrid were posing. Mostly, they required a defensive lapse in order to progress – a poorly angled press, or a lack of co-ordination in the man-marking, which then allowed a Barca midfielder to get free.

Below is an example of this – De Jong drops deep and Real Madrid fail to co-ordinate who should go with him. Dani Carvajal doesn't follow his man but also fails to pass him on to Federico Valverde. De Jong is free to receive, turn, and play forward. 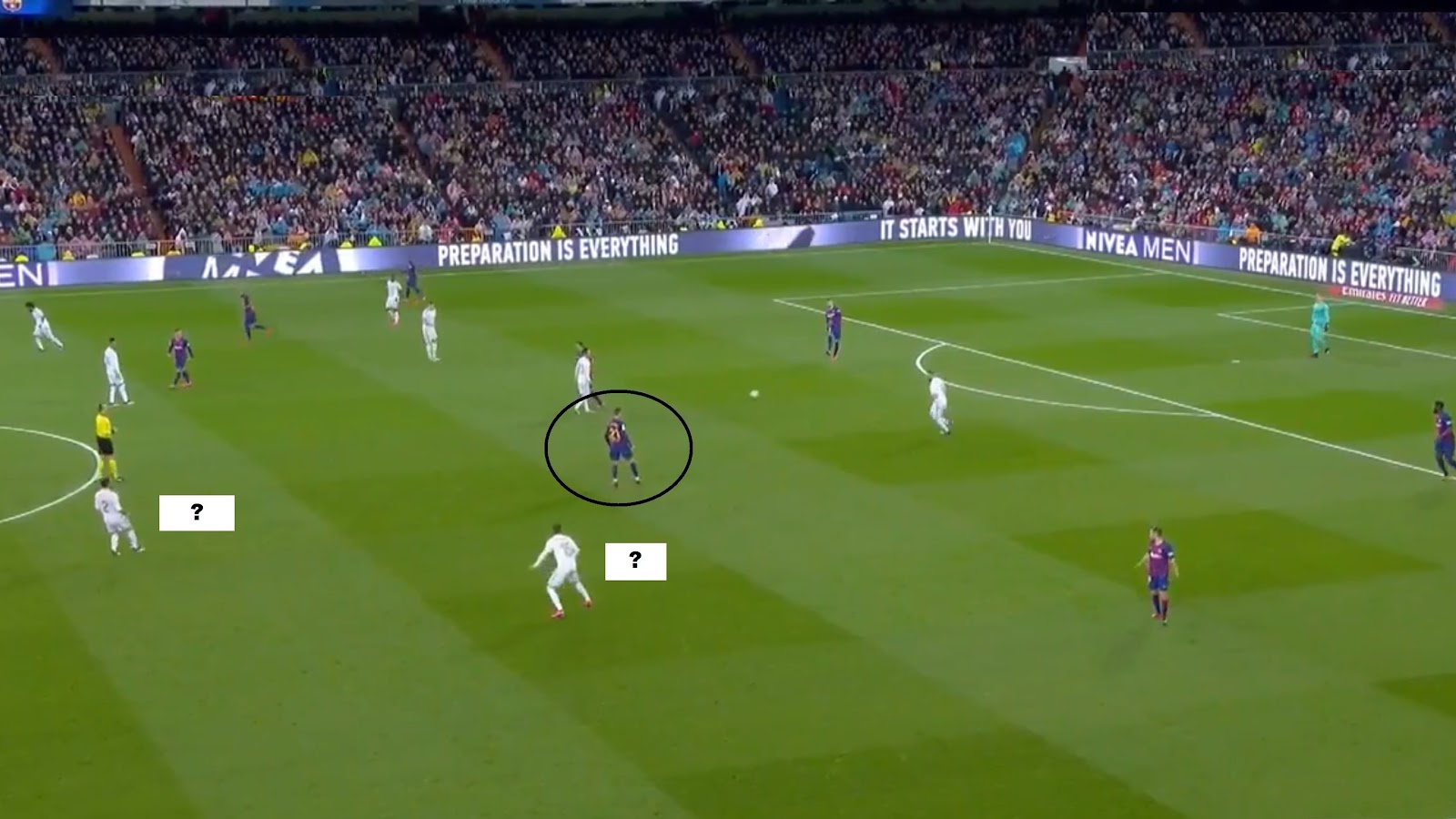 Barcelona were able to cause problems in the brief moments when Zidane's man-marking plan lost cohesion, particularly when Arthur or Busquets got on the ball. Without a marker breathing down their neck, they had the quality to pick a pass that could split Real's defence. Beyond that it was a case of simply keeping possession without threatening or going more direct and risking turnovers against an extremely aggressive Real back line.

Below we see Ter Stegen attempting one of his more direct passes. Again, all of his short options are closely marked, so he doesn't have a lot of choices. However, before the direct pass can even reach De Jong, the Dutchman's marker Carvajal (circled) steals in front of him to intercept the ball and kick-start a Real Madrid counter-attack. 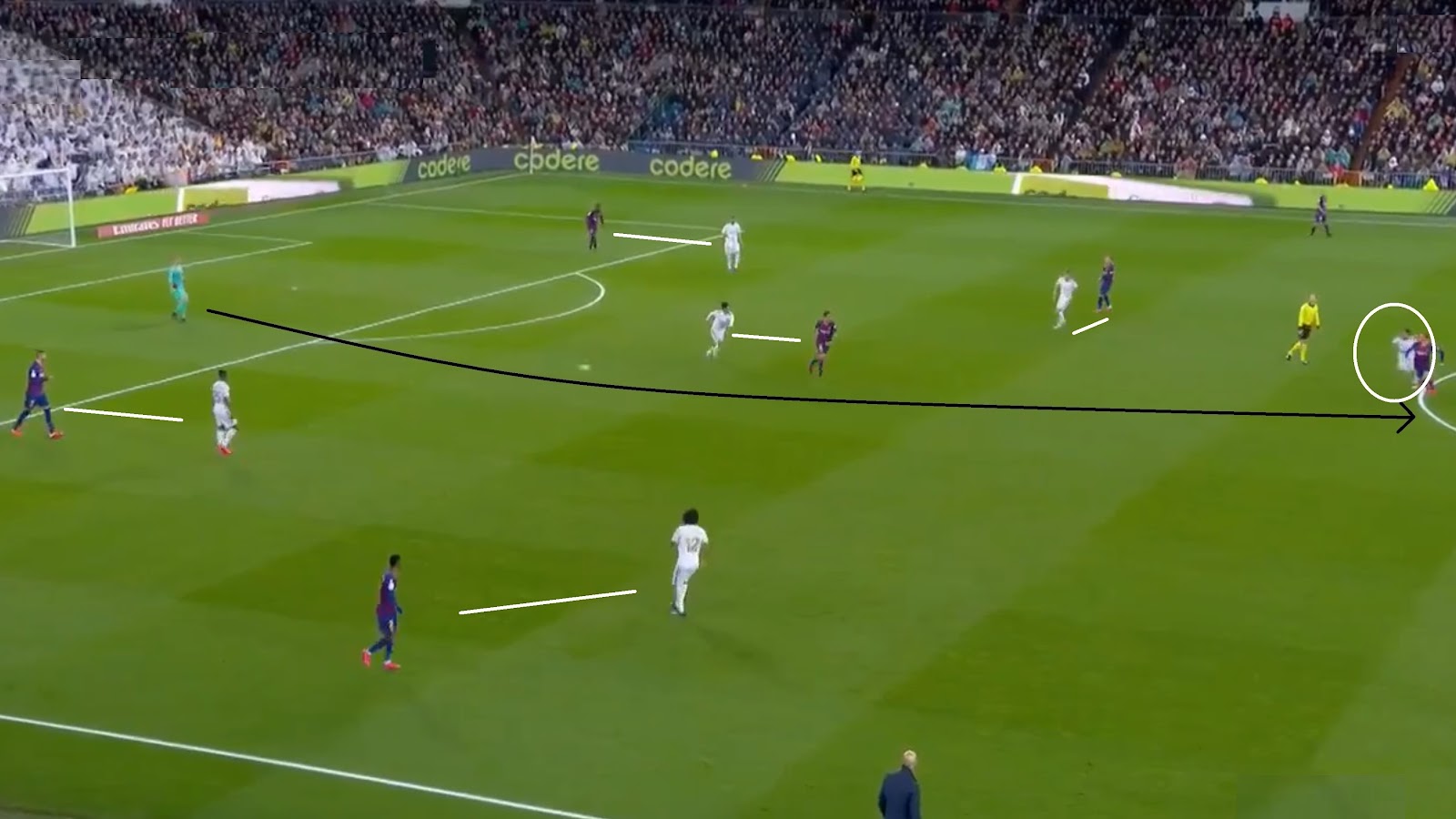 Zidane opted for Valverde and Vinicius on either side of his midfield. Both players are energetic and lightning fast, and that was integral to the Frenchman's tactics as they were tasked with keeping tabs on Barcelona's full-backs.

Again, it was man-to-man defence, but the risk was Semedo and Alba have the pace to get around the outside of most opponents. This wasn't the case here, however – as it turned out, Valverde and Vinicius were just as quick, if not quicker, than their opposite men.

With Carvajal and Marcelo tucking inside to mark De Jong and Vidal, Real's wingers needed to have the speed to get back and prevent Semedo and Alba from overlapping into the space out wide. In the end, they did this fairly comfortably. Below we see Valverde running back to track Alba and control any overlapping run. 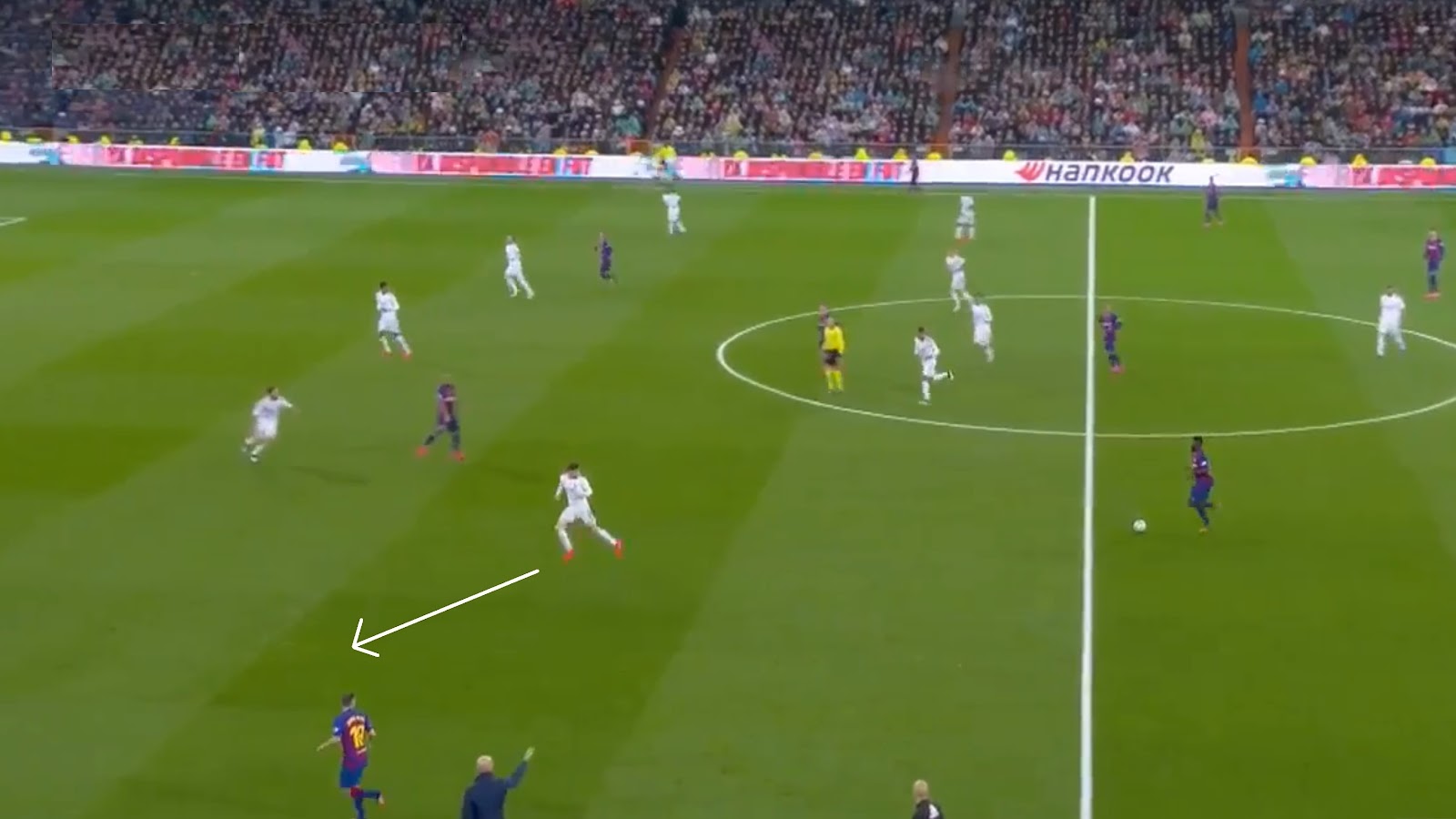 Zidane's choice of wingers also informed Real Madrid's attacking play, which was based primarily on going around Barcelona's 4-4-2 defensive block and countering quickly whenever the opportunity arose. Benzema's excellent link play under close attention from Umtiti helped Real get up the pitch, while the pace and runs of Vinicius provided cut and thrust.

Ironically, it was Barcelona's complete lack of speed that allowed Real Madrid to employ such a rigid and aggressive man-marking strategy. There was a time when marking Messi like this meant giving up space behind that Pedro, Neymar or Luis Suarez could exploit with an intelligent darting run. But Barca just don't have that dynamism anymore. Unsurprisingly, the intense counter-pressing seen under Pep Guardiola and the ruthless counter-attacking seen under Luis Enrique also weren't evident.

Barcelona looked incapable of attacking at anything above walking tempo, and Real Madrid took full advantage of their immobility, refusing to let their rivals move an inch without being followed. Man-marking is an old tactic, but this Barcelona side look even older.