​Rudiger given chance for Chelsea return after Lampard heart-to-heart

The stakes were high in the latest edition of the Derby d'Italia. Victory for Juventus in their own stadium would send them top of the table, ahead of Lazio, while a win for visitors Inter Milan would propel them to within three points of Juve and five of Lazio with a game in hand, setting up a three-way title race.

Ultimately, the game was no real contest. Inter were unable to prevent the reigning Italian champions from playing out from the back and couldn't get their own attacking game going against a resolute defence. Juventus won 2-0, returned to the top of Serie A, and reasserted themselves as favourites for the title.

Maurizio Sarri has found it hard to re-create what he had at Napoli ever since leaving for Chelsea. His struggle has continued in Turin, where Max Allegri's influence still lingers almost one year on from the managerial change. Nonetheless, Juventus do play out from the back under Sarri, and they continued to do so in their usual 4-3-3 shape in the face of an aggressive Inter press.

Antonio Conte set his Inter side up in a 3-5-2 system that saw strikers Romelu Lukaku and Lautaro Martinez press Juve's centre-backs when they tried to build possession. Meanwhile, Inter went man-to-man in midfield when they pressed high, with Marcelo Brozovic stepping up to mark Rodrigo Bentancur, Juve's deepest midfielder. Inter's wing-backs then took it in turns stepping up to close down their opposite full-backs. 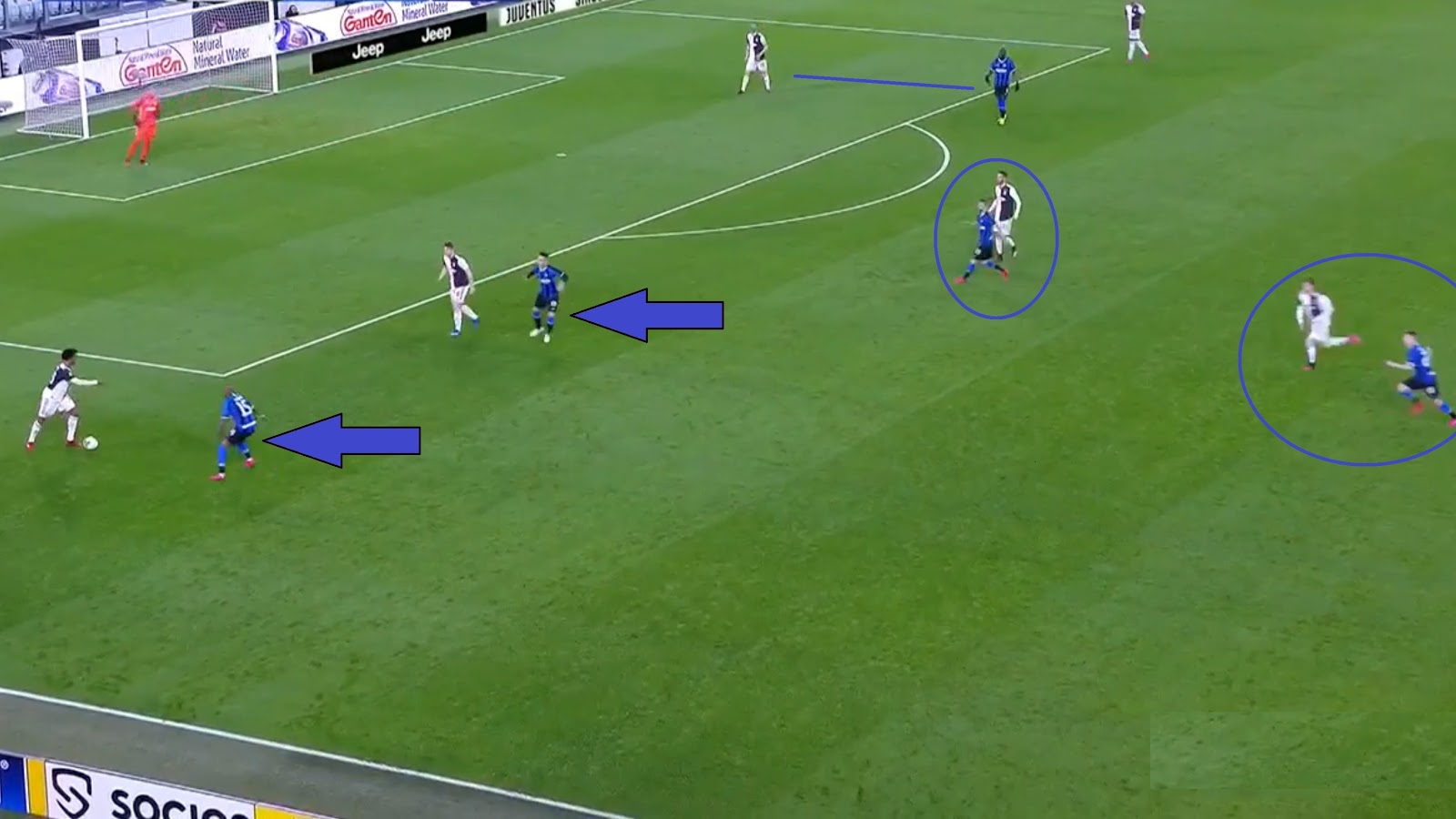 The problem for Inter was the huge distance their wing-backs, Antonio Candreva and Ashley Young, had to cover to close down Juan Cuadrado and Alex Sandro.

Juventus' full-backs stayed deep in build-up, meaning they could both receive out quickly from Wojciech Szczesny. A simple two-pass combination from one side to the other, via the goalkeeper, was enough to get one of Cuadrado or Sandro on the ball with time and space as Inter's wing-backs struggled to re-adjust and close down. This gave Juve's full-backs space to dribble forward into.

And, even if Cuadrado and Sandro were closed down, they usually had enough time to look up and pick a pass down the touchline or into the feet of a dropping striker.

When Juventus build out from the back, their midfield three drifted apart and dragged their man-markers with them. Matias Vecino would follow Blaise Matuidi and Nicolo Barella would follow Aaron Ramsey, while Brozovic marked Bentancur. This left Inter's midfield completely open, allowing Juve's full-backs to look up and pass to the feet of a forward – be it Cristiano Ronaldo, Gonzalo Higuain or Douglas Costa – who dropped off the frontline to receive.

Inter's aggressive man-to-man high press left them with a 3v3 against a highly dangerous frontline, with 1v1s their centre-backs couldn't win. Costa versus Alessandro Bastoni and Ronaldo versus Milan Skriniar weren't positive match-ups for Conte's men, and these 1v1 situations were exploited consistently by Juventus. 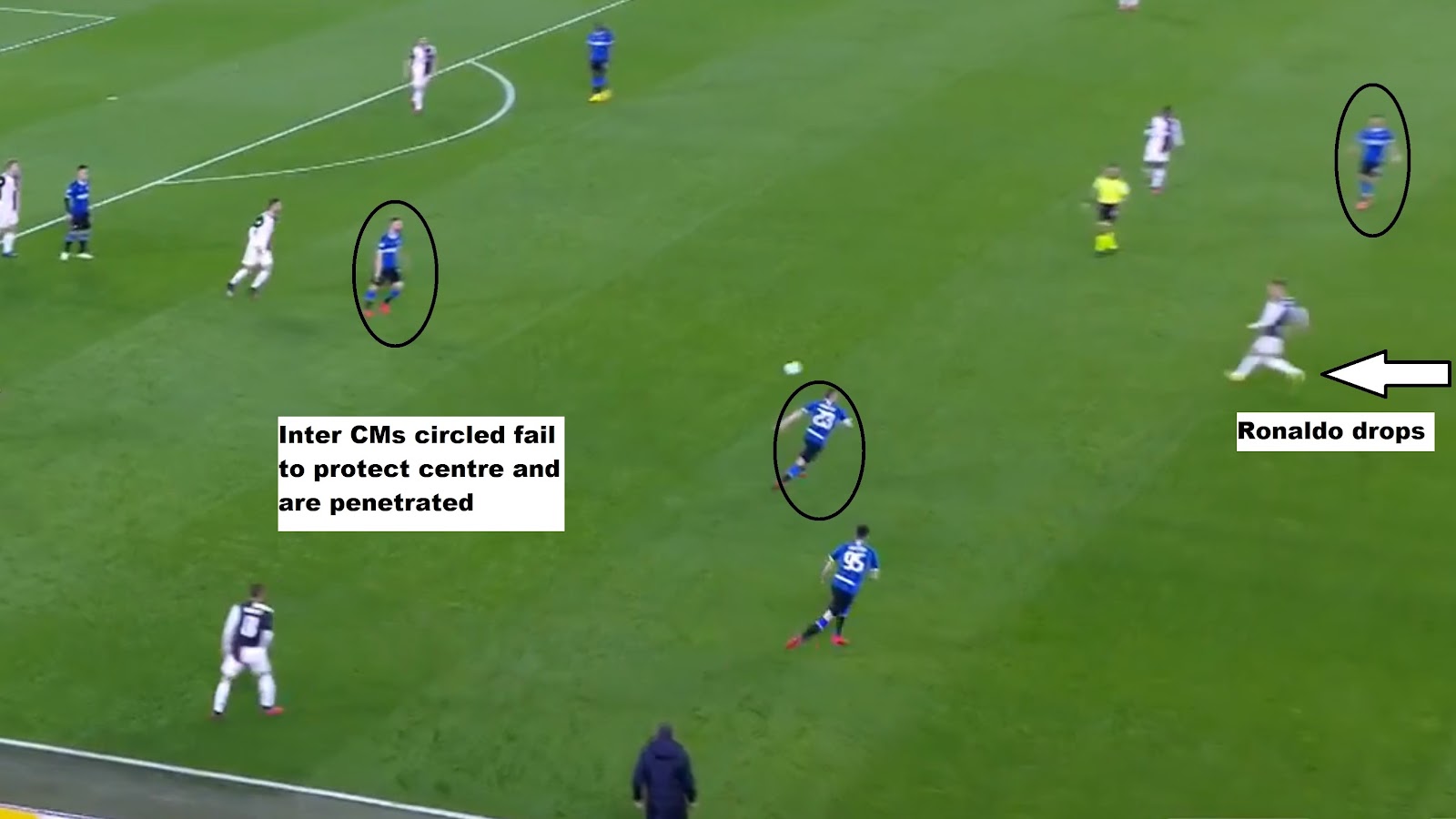 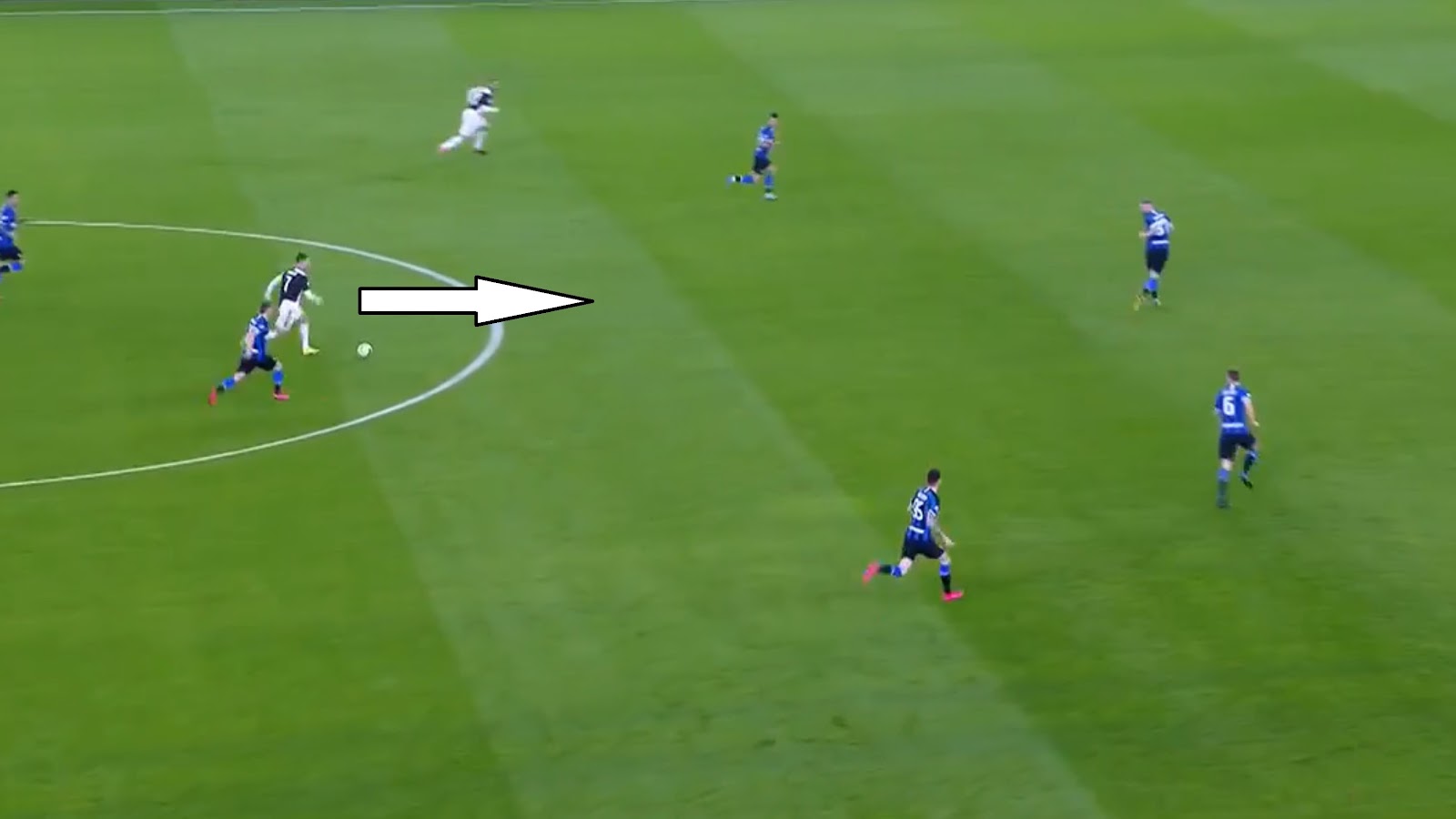 While Inter pressed high, went man-to-man and left themselves open through the middle, Juventus sat off and kept a compact 4-4-2 defensive shape. Costa was part of the front three when attacking, but defensively he dropped off to the right side of the midfield four, with Blaise Matuidi on the left side.

The midfield quartet of Costa, Ramsey, Bentancur and Matuidi were very narrow, meaning every single one of Inter's midfielders was either covered or blocked. When Inter's centre-backs looked to pass into midfield, there were no options available because of how compact Juve's midfield line was.

Unable to go through, Inter were forced to go long or go around. They chose the latter option, but came under pressure whenever sideways passes along the back line were played. 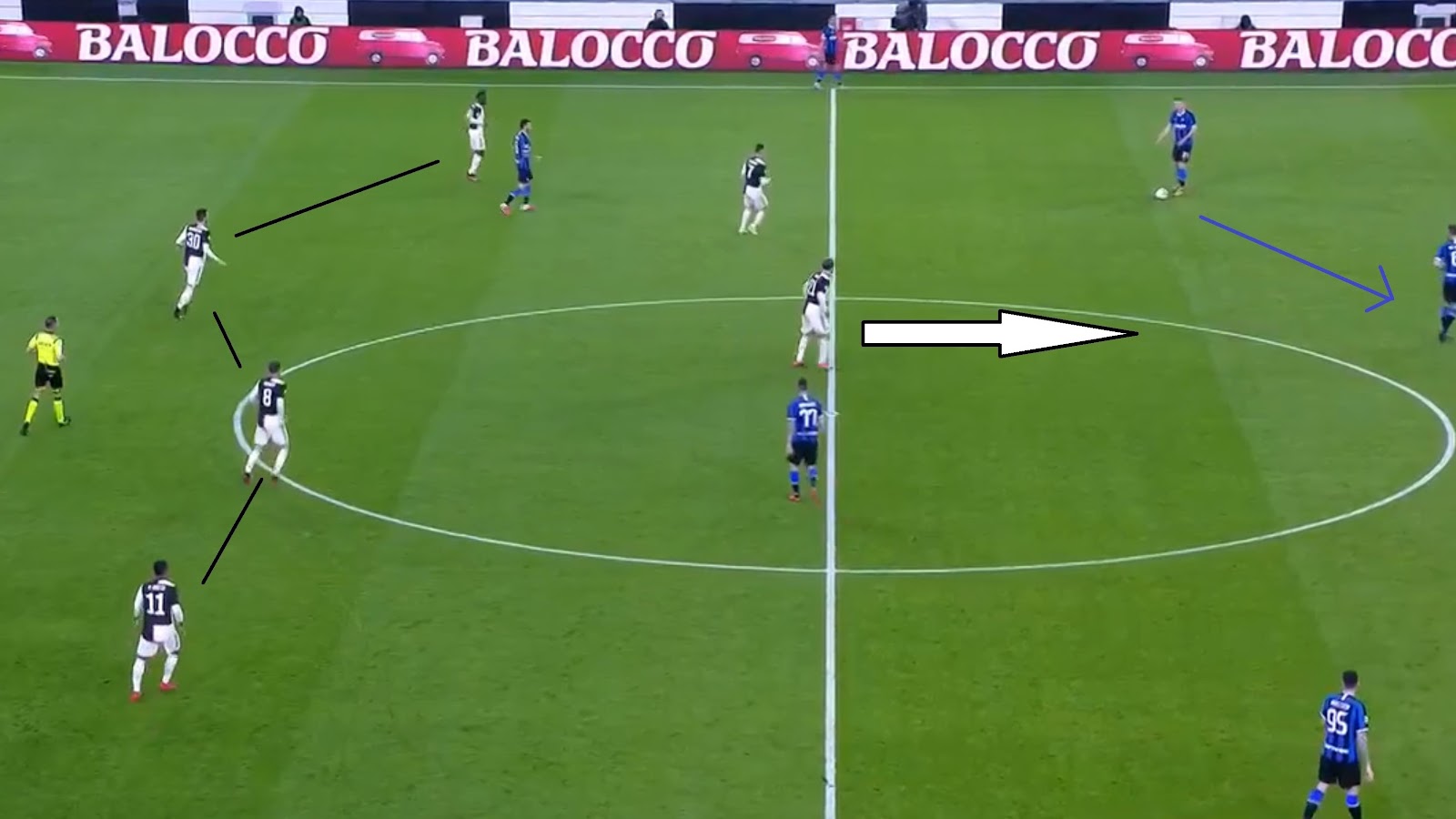 The one saving grace for Inter here was that the Juventus front three lacked intensity in their pressing. Ronaldo isn't effective in these situations, while Higuain doesn't have the mobility or mentality to constantly press and cover. Costa stepped up to help his teammates by pressing Bastoni, but generally Inter could keep hold of possession. The problem wasn't retaining the ball, however. It was penetrating.

Even if Inter could get beyond the initial pressure from Juve's frontline, they failed to open up the next two lines of defence. Juventus got back into two banks of four, kept a compact shape, and denied passing lanes through the centre. Inter needed a bit of creativity to unlock their opposition, but their midfield was found wanting for ideas. 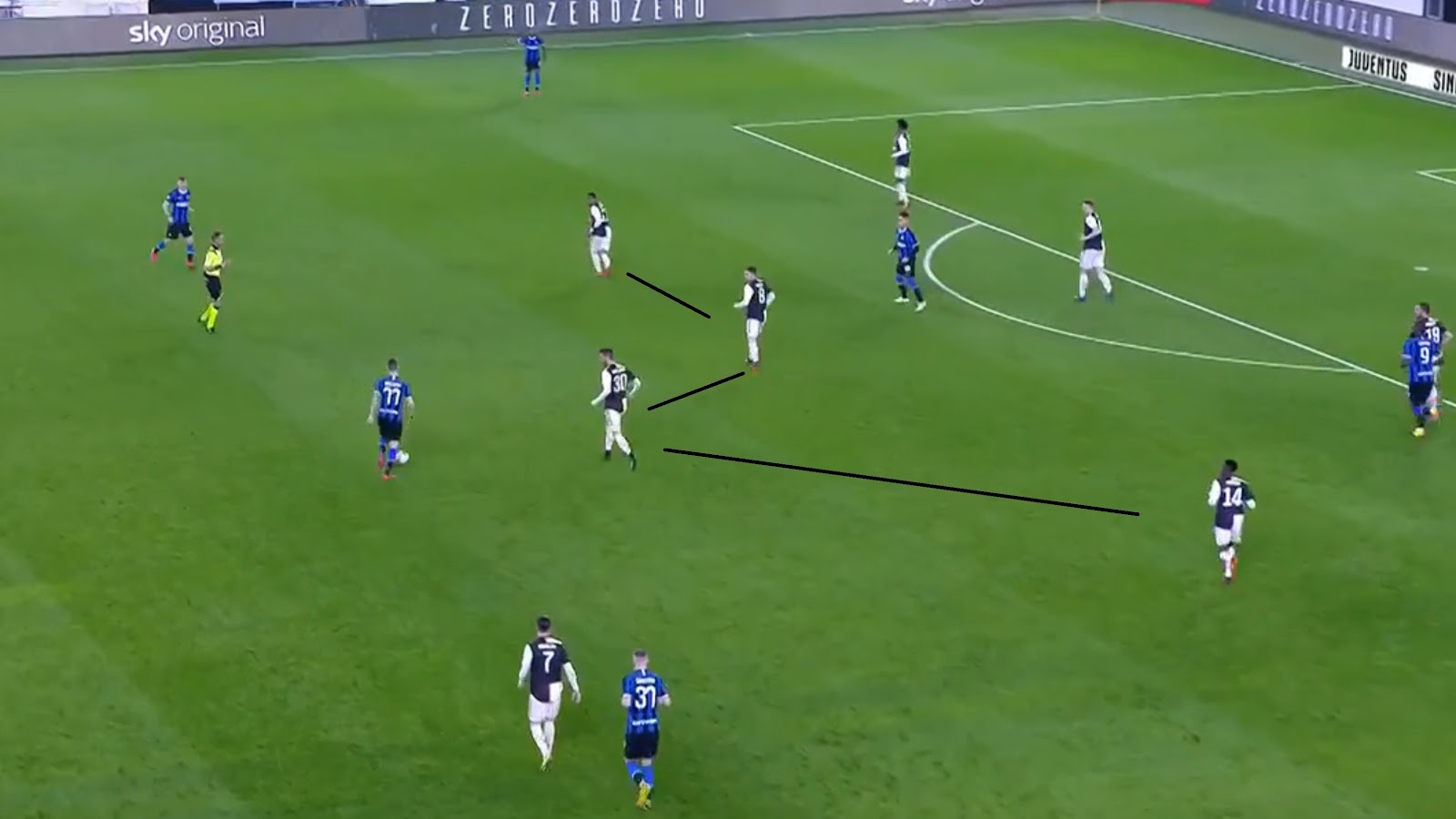 Another attacking issue for Inter was that when they went wide, they weren't able to come inside as they would like to. Normally, Conte teams are able to work their way back into central areas with a bit of combination play between the wing-backs, strikers and midfielders. Here, however, Lukaku was closely marked from behind and had little support with Juve's midfield dropping to congest space between the lines.

As seen below, Lukaku has received a ball in from Young on the left wing and Martinez looks to make a third-man run off him. But Lukaku is marked well by Leonardo Bonucci and there are too many Juventus players around the ball to allow for a lay-off to Martinez. Predictably, Inter's move fizzles out.

In the end, Inter were able to record just one shot on target and, per Understat, attain an xG of just 0.44. They had no clear chances, and were undone by moments of individual brilliance from their opposition.

Matuidi made a number of forward runs off the ball to try and break the lines, and one of these runs led to Juve's opening goal. The Frenchman played the ball out wide left to Alex Sandro and made a run behind Inter's defence to receive the return pass. He then fired a cross low and hard across the box for Ramsey to finish.

With Inter searching for an equalizer, Dybala showed his class. When Inter attacked, the Argentine looked to find pockets of space in high and wide positions where he could go undetected in transition. Then, on 67 minutes, Juventus counter-attacked through him, with Bentancur playing an excellent diagonal ball out to Dybala on the right-hand side. The 26-year-old took the ball down, dribbled infield, played a one-two with Ramsey, and scored Juve's second.

Conte's pressing plan didn't work, while his team were unable to break down a Juventus defence that looked a lot like it used to under Allegri's management. But they may still have secured a solid point were it not for the decision-making of Matuidi and Dybala.