Spain have progressed to the quarter-finals after triumphing 5-3 against a gallant Croatia in the game of the tournament so far.

It was an 8-goal classic in Copenhagen, the second-highest-scoring European Championship match in history. With so many twists and turns, there was hardly time to take a breath.

The match commenced with damaging forced changes to Croatia, with Lovren out due to suspension and Perisic out after testing positive to COVID-19.

Spain on the other hand dropped Moreno to the bench in place of Ferran Torres, with Jordi Alba also missing out for Gaya.

From the kick-off, Spain as per usual established themselves as the side who would dominate possession, playing the game on their terms mostly in the Croatian half.

For the first 20 minutes it was largely one-way traffic, with Spain creating a number of positive opportunities.

In the 16th minute, the imaginative Pedri played an incisive through ball that split the defence and found Koke in space. His shot however was tame and straight at Livaković.

Three minutes later Ferran Torres put a delightful cross into the box, finding the head of Morata. However he miskewed his header across goal and was blocked by Vida.

Then the game seemed to descend into madness when Pedri played a firm back pass to his keeper. Bizarrely Unai Simon miscontrolled the pass and watched as the ball continued to roll into his own net. A simply mind-boggling own-goal.

In an instant the tie was flipped on its head and Croatia were on top. Croatia all of a sudden were into the game and Spain looked rattled after their positive start.

However Enrique's men were able to steady themselves and regain control of the flow of the game. Spain were rewarded for their control in the 38th minute when Sarabia put them level. The winger played the ball wide to Gaya who unleashed his shot on goal. Livaković's save rebounded back out to Sarabia who smashed the ball home.

Despite Spain's firm control of the game, the scoreline remained 1-1 going into the main break.

The second-half started more openly than the first, with both sides looking positive on the ball. However it was Spain who once again looked on top of the contest.

In the 57th minute, Pedri played the ball out to Ferran Torres, who sent in a lovely cross into the six-yard box, where the unlikely figure of Cesar Azpilicueta rose to head the ball into the net. Certainly a good time to score your first goal for your country.

It was a deserved lead for Spain as they controlled all facets of the game. They improved their foothold in the game with another goal in the 77th minute.

With Pedri winning a free-kick deep in the Spanish half, Aymeric Laporte had the wherewithal to send a quick free-kick out to Ferran Torres in space on the right.

His diagonal ball found the winger, whose first touch put him past Gvardiol and one on one with the keeper. Torres coolly slotted the ball between the keeper's legs and put Spain into a dominant position.

With 5 minutes remaining in the 90, the game seemed all but over, with Spain in full control and one-foot into the quarter-finals.

The Croatians however, had other ideas.

In the 85th minute, a Croatian throw-in found its way to Modric deep into the box. His ball across the area forced a goalline scramble, with the substitute Orsic eventually scraping the ball just over the line. Out of nowhere, Croatia were back in the game.

With an additional 6 minutes of added time, the Croatians smelled a comeback.

In the 3rd minute of additional time, the substitutes combined with Orsic floating a delightful ball into the box towards Pasalic. The Atalanta midfielder flicked a header across goal and watched it nestle into the bottom right-corner.

Pandemonium ensued inside the Parken Stadium with the fixture once again in the balance.

The referee shortly after blew his whistle to bring the tie into extra-time.

Croatia started the more likely after the short break, with Orsic again firing a side-footed half volley just over the bar.

A pivotal moment came in the 96th minute, when Orsic's ball across the box found Kramaric in front of goal. His shot was saved magnificently by the strong hand of Unai Simon, heroically making amends for his earlier costly mistake.

The game was truly in the balance, with both sides daring to score a winner.

In the 100th minute, substitute Dani Olmo put in a deep cross to the much maligned Alvaro Morata. The striker controlled the ball with his right foot, and then smashed the ball home with his left, silencing the critics and sending the Spanish fans into hysterics.

3 minutes later, Olmo once again sent in a cross that put Oyarzabal in on goal. Oyarzabal finished coolly into the bottom left-corner, surely sealing Croatia's fate.

At this point both sides looked almost dead on their feet. Spain reverted to what they do best, playing keepings-off the opposition, forcing an exhausted Croatian team to chase.

After 120 minutes, Cüneyt Çakır blew his whistle in Copenhagen to send La Roja into the quarter-finals.

For Spain, they now meet the winners of France vs Switzerland on Saturday in Saint Petersburg. They will go into the game having officially shaken off their goal scoring woes, with 10 goals in their last two outings.

For World-Cup runners-up Croatia, they leave the tournament disappointed but with their heads held high after a brave comeback performance. Despite their talent, they keenly felt the loss of key players such as Perisic and Lovren, both integral to their 2018 World Cup campaign.

What a memorable night in Copenhagen; one of the great European championship matches.

Man of the Match:Ferran Torres 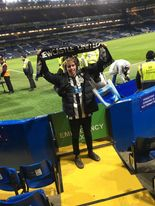