Havertz: Chelsea fans expected me to be new Ronaldo

With Euro 2020 about to kick off, we at Tribal Football will be breaking down the runners and riders. We will analyse the tactics, key players and plot out each team's chances of success. Today we continue with the main contenders, moving onto Germany, Portugal and Spain.

Muller was ostracised by Germany manager Joachim Low in 2019, with Low feeling the Bayern Munich legend no longer had a part to play in the national team's future. Within two years that decision was reversed, and Germany are better for it. Muller is one of the most intelligent forwards around, with deceptive movement and capacity to score in the air or on the ground. As for Kimmich, his flexibility will be key: he can theoretically fill four of the 10 outfield positions in Low's 3-4-3 system.

Germany's transition to a 3-4-3 in recent years has not been smooth, but Low likes the shape. It makes more sense than ever now, considering how well Antonio Rudiger and Timo Werner played in the exact same system for Thomas Tuchel's Chelsea this season. Like with Chelsea, the 3-4-3 helps Germany to hide clear weaknesses. 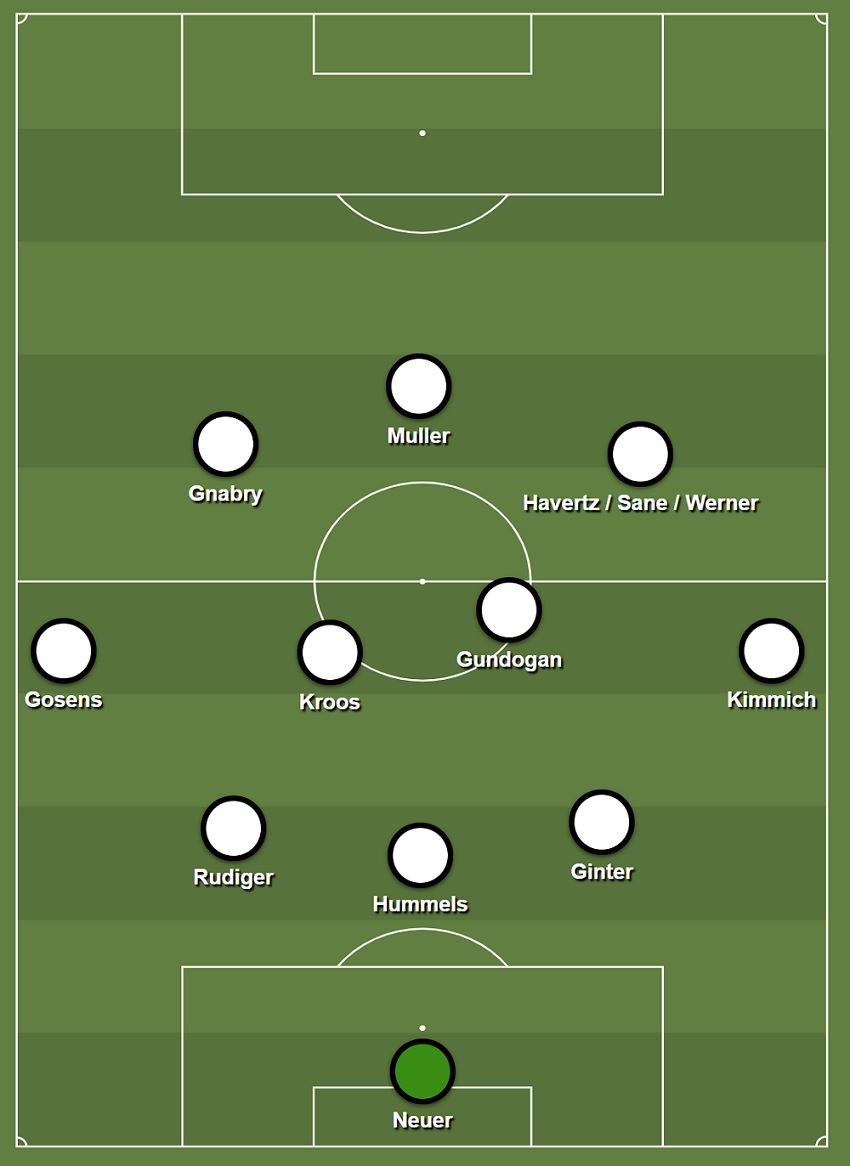 Mats Hummels, like Muller, has returned after exclusion in 2019 and will lead the back line. He lacks pace, but he will be supported by Antonio Rudiger, who plays his best football in a three-man defence. In front of them, Germany lack a protective presence. Ilkay Gundogan and Thomas Kroos offer penetrating runs and passes, but neither is a ball-winner. Kimmich could help a little in this respect, but he's also needed at right wing-back.

The extra defender may help mask the team's defensive shortfalls. Germany might still be open, but they now have another man back to negate counters. It's also possible that they will be more cautious as a unit, sit back and counter using the pace of Serge Gnabry, Leroy Sane and Werner. With Kai Havertz also entering this tournament in form, Germany are not short of top class attacking options.

This is Low's last tournament as Germany boss, and he'd love to go out on a high. Strangely, the quarter-finals might be a positive finale, especially considering how poor the team has been of late. Germany may not be 100% ready to go and win the whole thing, and a tough group stage draw featuring France and Portugal won't give any easy points. But they still have a lot of quality and could threaten as a counter-attacking force once the knockout rounds begin.

Captain, goalscorer, winner: Ronaldo, as always, will be Portugal's main man this summer. On the back of another impeccable season with Juventus, where he hit almost a goal per game, the 36-year-old superstar shows no signs of waning. He will lead the team's attack, while Dias is the key to the back line. Dias enjoyed a stunning debut season in England, galvanising Manchester City's defence and winning the Premier League Player of the Season award. With Pepe and Jose Fonte the other options, he brings much-needed pace to the centre of Portugal's back four.

Portugal are the reigning European champions, but they won't win awards for aesthetics. Fernando Santos, as he did five years ago, will line his side up in a 4-4-2 based on solid defence, good shape, and counter-attacking. He won't care about how much fun neutrals have watching his team, and nor will most Portugal fans, especially if it gets them to the business end of another tournament. 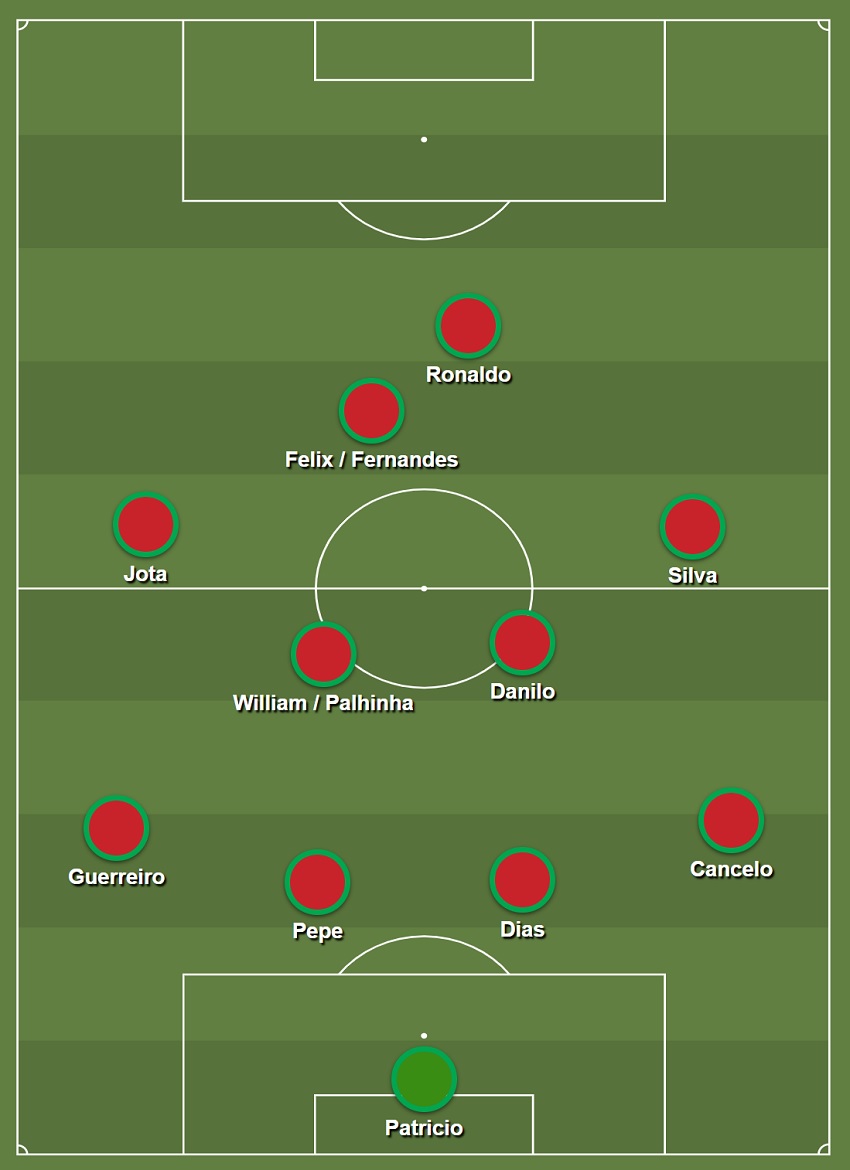 Ronaldo will lead the line, obviously, but this time he has a first-rate supporting cast. Since the last Euros, Bruno Fernandes, Bernardo Silva, Joao Felix and Diogo Jota have emerged as key players for top European clubs. The only problem Santos has is fitting them in whilst retaining the balance of his team.

The way Portugal are set up helps to mitigate the lack of quality centre-back options. Playing more expansively might expose the likes of Pepe and Fonte, both of whom are in their late-30s and lack the speed of their younger years. Dias helps in this regard, but this could still be an issue if Portugal find themselves behind and chasing a game.

Portugal's minimises their weaknesses, which is the right thing to do in a knockout competition. Last time out they won the whole tournament...after winning just one game inside the scheduled 90 minutes. Draws might be enough again this summer, but they won't be easy to come by in a group featuring France and Germany. Still, Santos and his team should fight their way through, and once into the one-off ties they will be in their element. Assuming Fernandes, Felix, Silva or Jota steps up to aid Ronaldo, Portugal can go all the way to the final.

He may not score a lot of goals, and defensively his best skill is fouling, but Thiago makes Spain tick. His movement, control and passing are all crucial to the team's play. While Sergio Busquets or Rodri holds, he is allowed to drift, get on the ball and knit moves together. But if Spain are to return to the top of international football they will need more end product. Morata is set to lead the line, and he needs to capitalise on his chances.

Spain's ultra-patient possession didn't work at the 2018 World Cup, prompting a re-think. Luis Enrique was appointed manager, tasked with adding more speed and risk to a team that could keep the ball all day long. He did something similar at Barcelona in 2014, rejuvenating a pass-heavy team by injecting more pace and directness. So, while Spain still line up in a 4-3-3, the actual style might be slightly different. 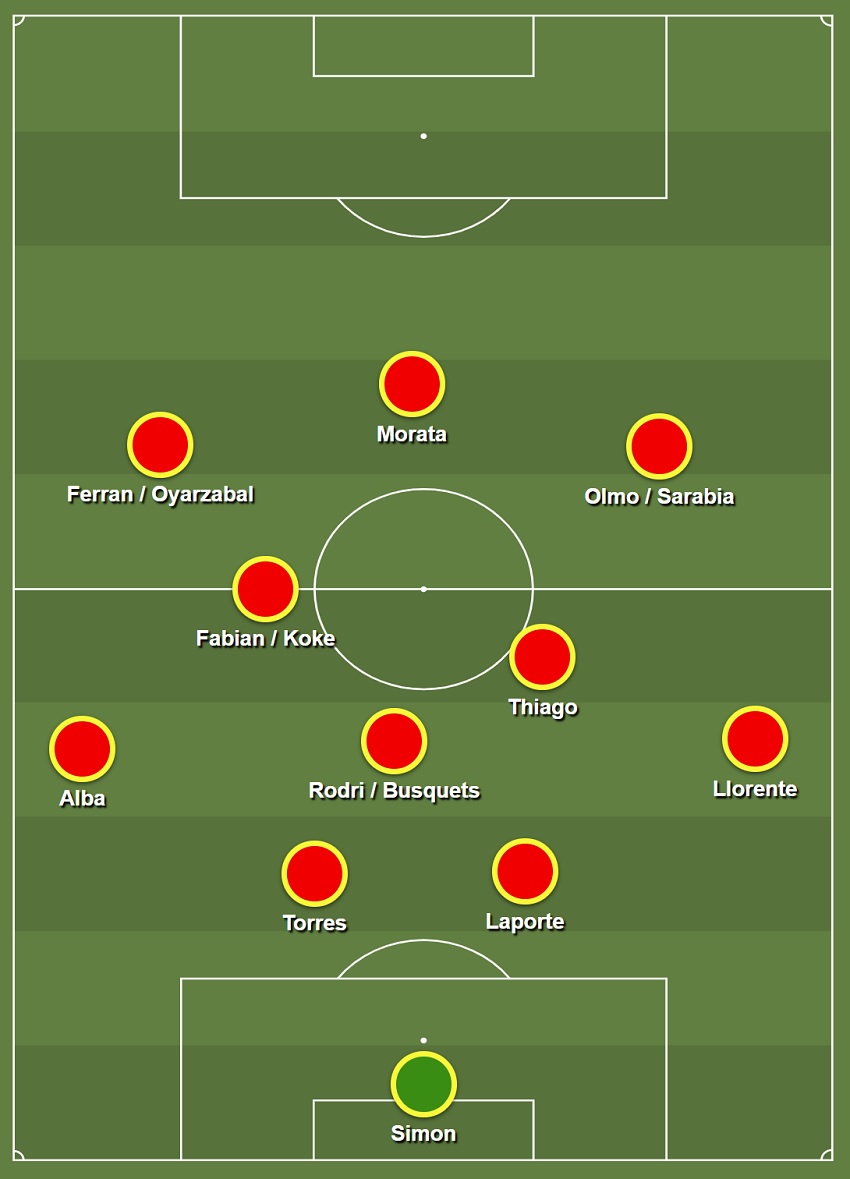 Forgetting of play, this is a completely different team personnel-wise to the one that got knocked out of the World Cup by Russia. Seven of that starting XI aren't even in the Euro 2020 squad, while goalkeeper David De Gea has lost his place to Unai Simon. Fresh faces could mean a fresh outlook. Fabian Ruiz is more direct than his compatriots, making runs from midfield to get in behind defences. Marcos Llorente offers something similar, even when playing as a right full-back. And up front, Ferran Torres and Mikel Oyarzabal offer speed and skill.

This is a Spain team with greater potency than the 2018 edition, but it is also one with question marks. Without a prolific No.9, do they have the cutting edge to finish off opponents? And, with Aymeric Laporte only changing nationality from France pre-tournament, will he be able to form a working central defensive partnership with Pau Torres from the get-go?

Spain are still adjusting to a new style. However, drawn into Group E with Sweden, Poland and Slovakia, they should progress to the knockout stages. With three winnable group games to iron out the tactical creases, followed up by a possible third-placed opponent in the second round, this young team could gain momentum as the tournament goes on. They aren't as good as the legendary generation of 2008-2014, but they don't need to be to reach the last eight. To go further, they'll need their centre-back partnership to work, and their strikers to score. Neither are guarantees.