Euro 2020 - How it happened: Why England win over Germany showed Southgate quality

Wing-backs have been very influential at Euro 2020. At the conclusion of the group stage, over half of the teams had played with a back five. Now, following their second round win over Germany, England can be added to that list. Gareth Southgate opted to bring Kyle Walker into central defence alongside John Stones and Harry Maguire for the big game, with Kieran Trippier and Luke Shaw defending the flanks.

While criticised in some quarters as being overly defensive, the decision paid dividends. With the change of formation, Southgate minimised risk and hoped for his attacking players to sparkle at the right moment. Eventually he got exactly what he was hoping for. Two goals, one from Raheem Sterling and the other from Harry Kane, sealed a place in the last eight.

England set up in a defensive 5-2-3 formation. Declan Rice and Kalvin Phillips were the central midfielders, while Bukayo Saka and Sterling flanked Kane up front. They pressed man-to-man, with the focus on taking time away from Germany when they tried to play short passes from the back. However, Germany were able to penetrate England's first two lines throughout the match.

Mats Hummels, at the centre of Germany's back three, showed good composure and vision to play through the lines, finding the midfielders or attackers to feet. If it wasn't Hummels, Toni Kroos would find gaps in England's first line to make himself available. Taking the ball on the turn, he would look to play forward quickly.

England were unable to stop Germany from playing forward, and their midfield was consistently overloaded. Timo Werner was looking to attack space behind, but Kai Havertz and Thomas Muller withdrew to create a 3-versus-2, become the free man and receive out from Hummels or Kroos.

When Rice and Phillips tried to get close to Goretzka and Kroos, Havertz and Muller took it in turns dropping into space. This caused problems for England's centre-backs, who were dragged out of position to deal with them. If Stones or Maguire lost their challenge or were combined around with quick one- and two-touch play, this then left a hole in England's defence which Germany exploited through runs behind. Werner, Leon Goretzka and Havertz were the main runners. 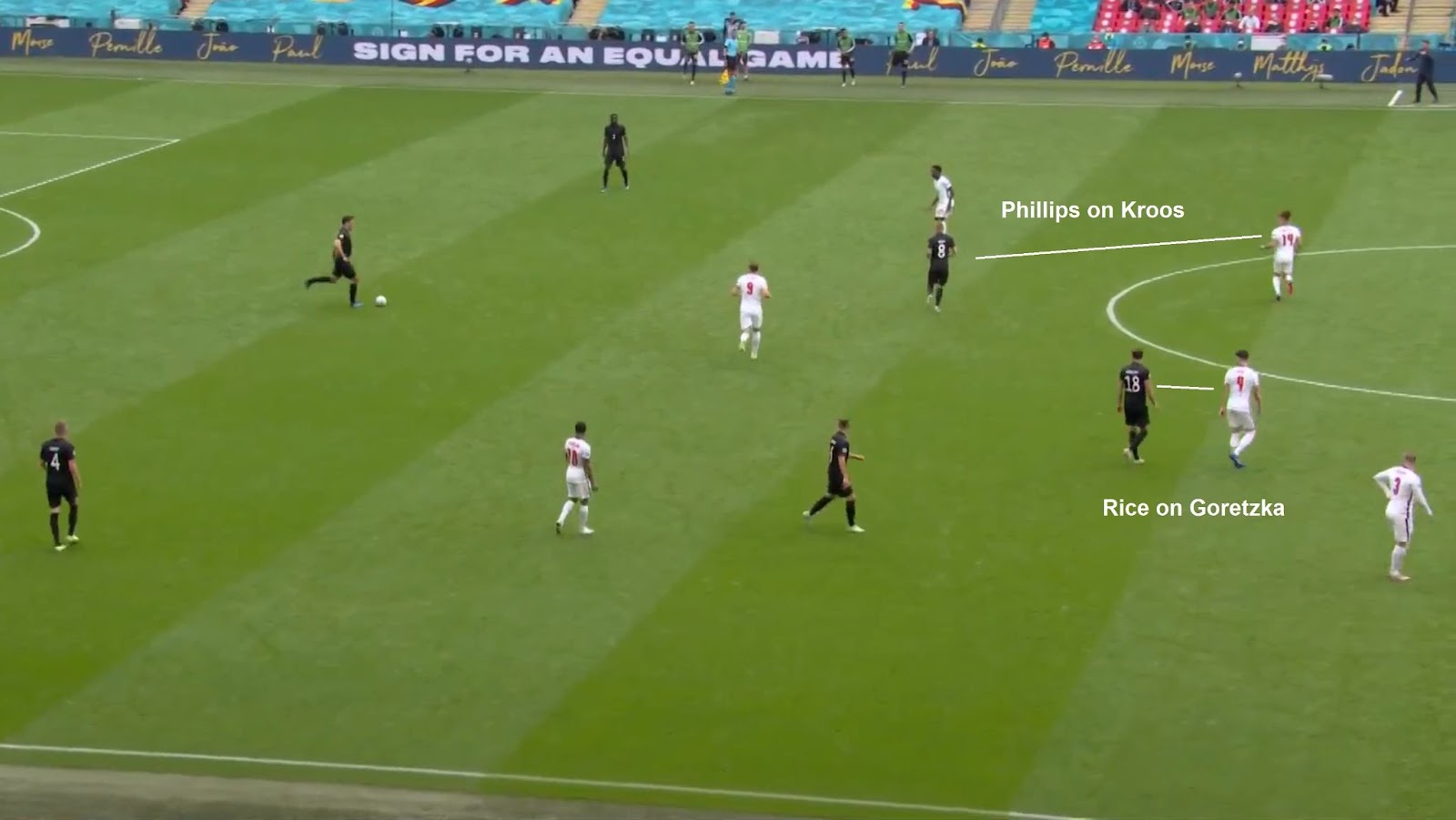 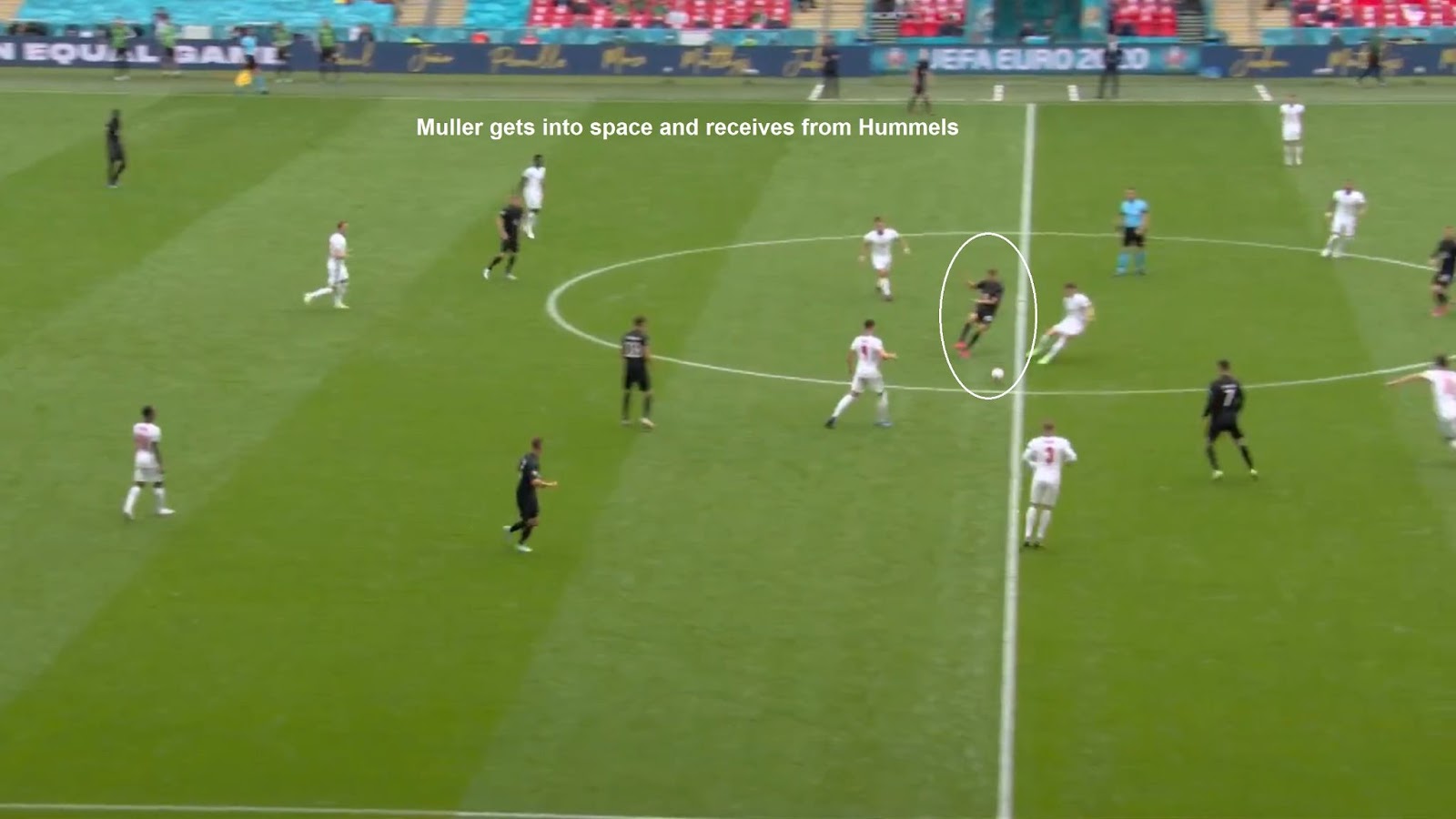 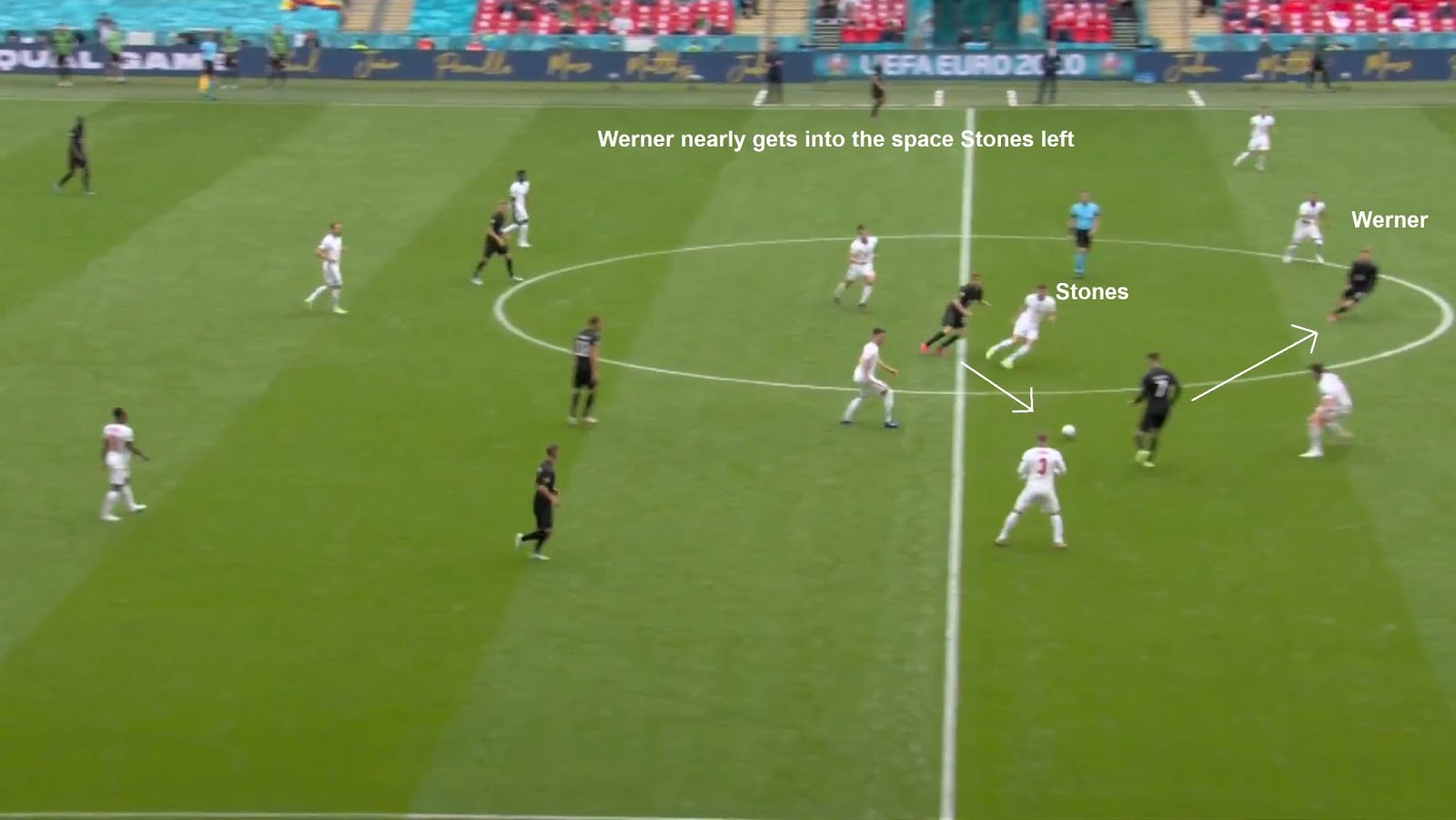 England's aggressive man-to-man pressing didn't work particularly well, especially in the first half. Germany sliced open their midfield and had no problem getting into dangerous positions, but were unable to capitalise. Part of this was poor finishing and a good save on Havertz by Jordan Pickford, but another element was Walker's speed to recover and snuff out any threatening runs.

Germany's wing-backs were integral to their 4-2 win over Portugal in the group stage. Joshua Kimmich and Robin Gosens made great runs on the blind side of Portugal's full-backs, got into the penalty box, creating and scoring goals. However, while Germany were able to get into some dangerous positions against England, they couldn't create in the same way.

England's back five limited the space for Kimmich/Gosens to make their runs inside from the wings. Unable to get in behind or hit the by-line, the onus was then on Germany to work chances through combinations or individual creativity (passing, crossing, dribbling, shooting). This is where Germany's attacks stalled. Neither Kimmich nor Gosens is the type to beat their man with skill, so they rarely worked crosses. Gosens was almost absent, while Kimmich was forced backwards by Shaw. 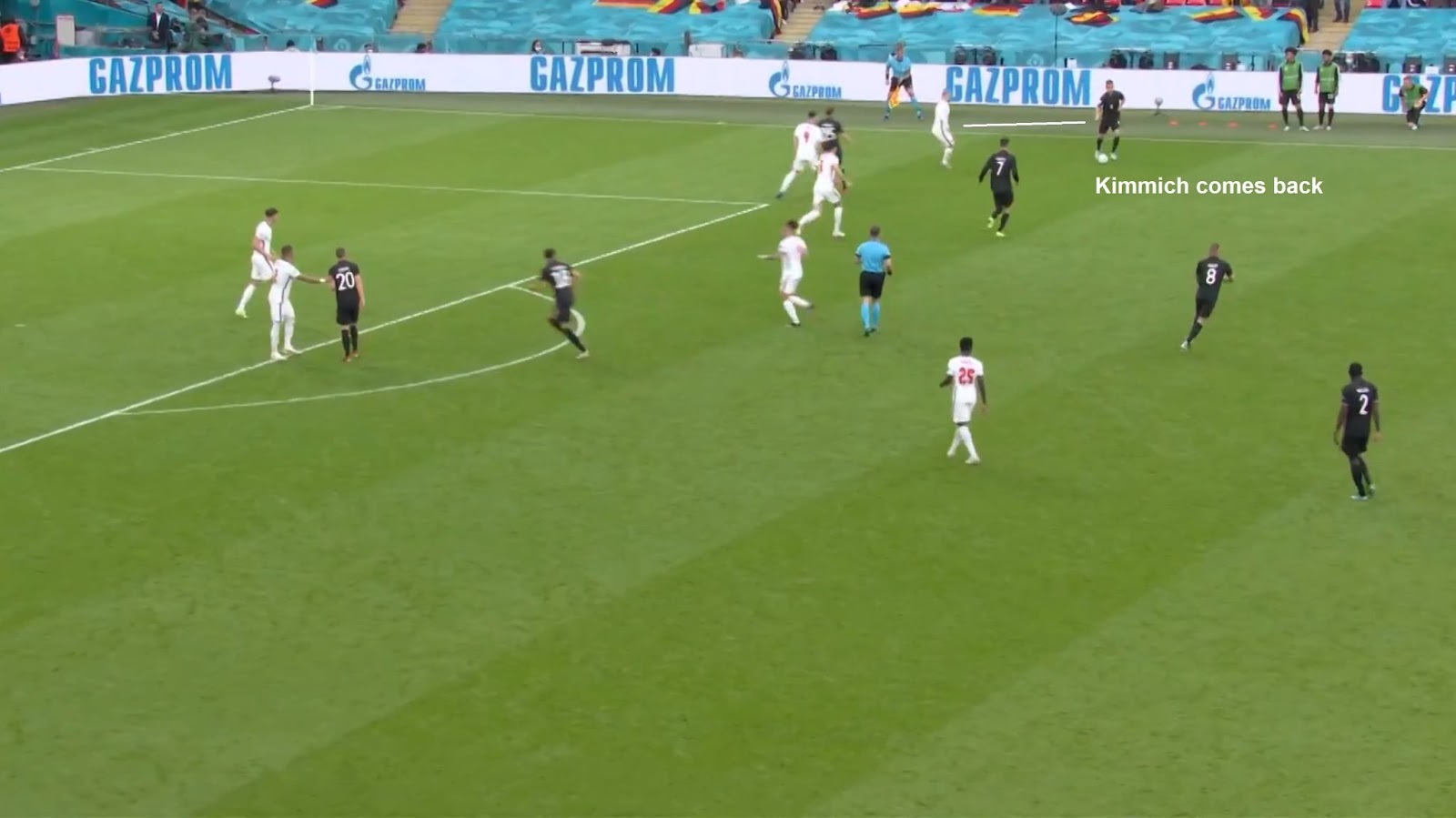 Long-range shooting wasn't ideal given England's central presence, with three centre-backs protected by two central midfielders. And, Havertz aside, Germany lacked players with the spark to go past their man. That meant it was all down to combination play, and again there wasn't much evidence of this. Without a threat out wide to stretch things, it all got congested and slow. Germany's attacks started promisingly, but often petered out in the final third.

Germany's defensive approach was more passive. Their front three tried to steer England into the wider areas by blocking Rice and Phillips. England tried to combat this by having Phillips rotate with Walker, but it didn't really lead to anything meaningful. The centre-backs seemed reticent to use Walker in the centre, while Phillips lacked options in the wider position.

Early on, Germany did a great job of cutting off passing options and winning the ball in midfield with tackles or interceptions. Outside of the occasional forward foray by Maguire, England found it difficult to move the ball forward effectively. But whereas Germany lacked ideas or individuality in the final third, England found solace in Sterling.

Sterling was England's key man once again in this game, causing chaos with his dribbling ability. Playing inside left, just off of Kane in a freewheeling role not dissimilar to the one he played at the 2018 World Cup, the Manchester City man regularly injected pace to England's attack, took out two or three defenders and opened up the game.

This was how England's opening goal came about. Sterling, now in the inside right position after Jack Grealish's arrival from the bench, got on the ball and dribbled into the centre. He went past three defenders, attracted a fourth, then found Kane. After this he continued his run, hit the box and finished on Shaw's low cross. 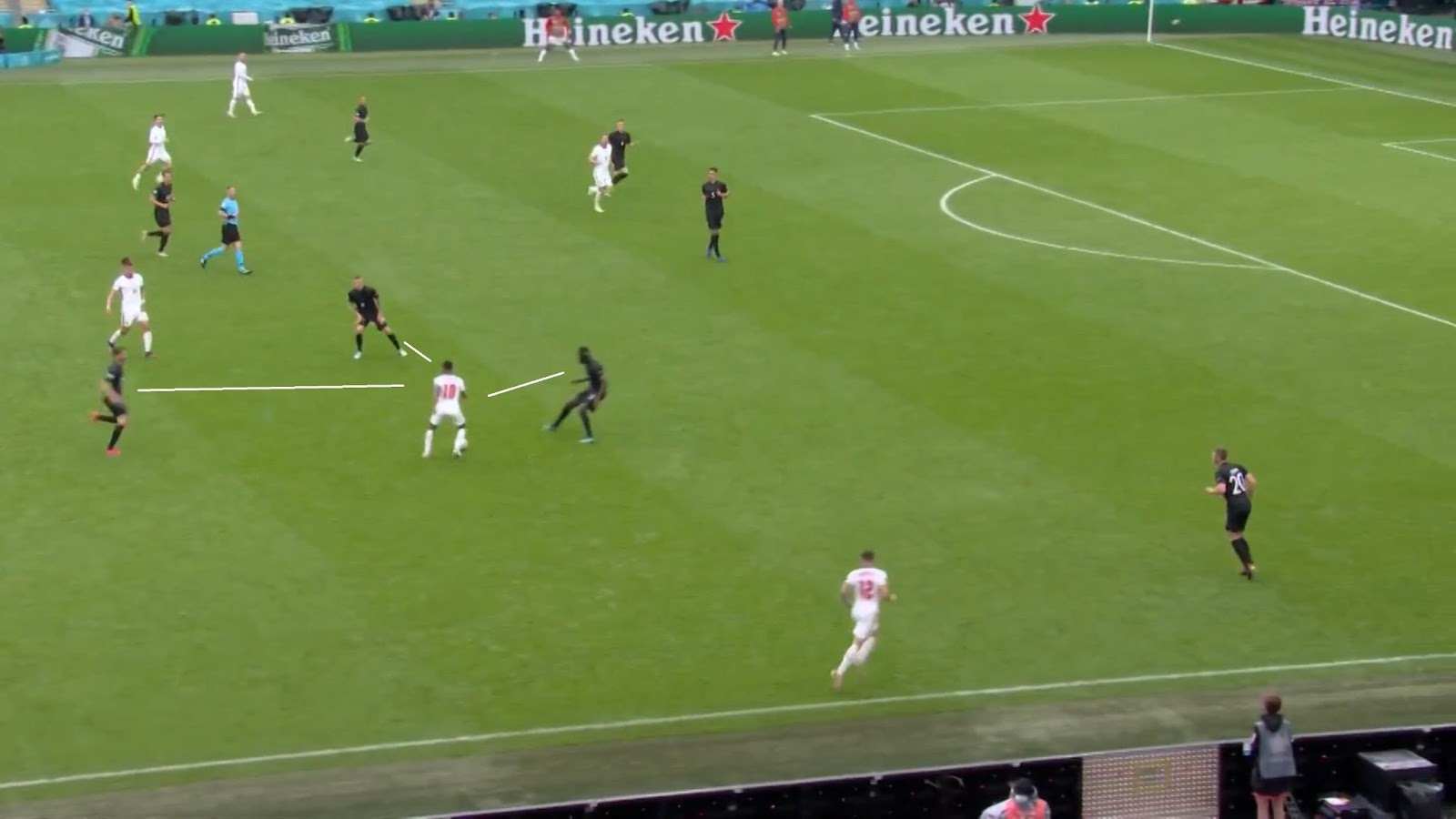 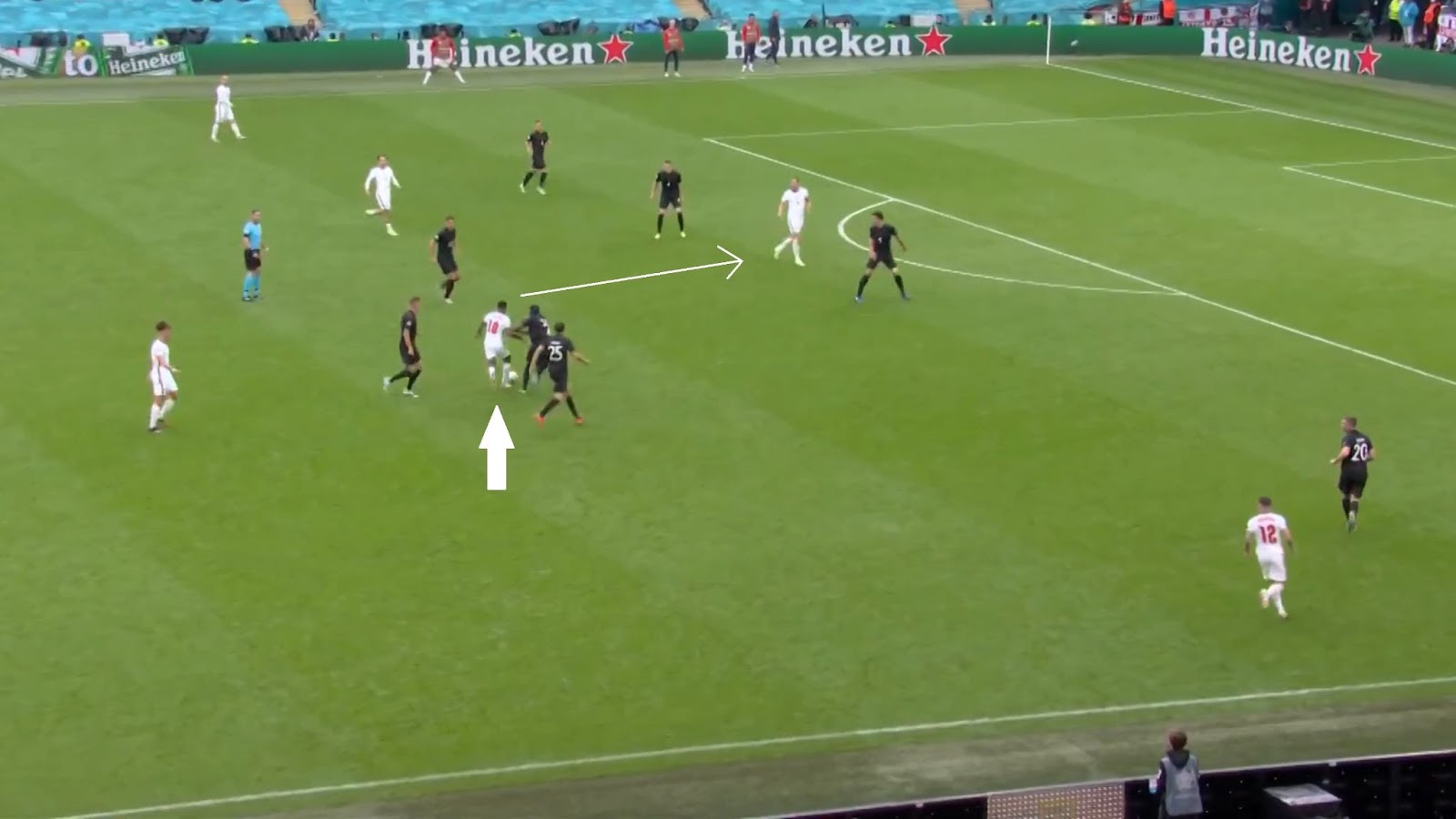 There was one instance where Sterling's propensity to dribble inside almost cost England. He was tackled and, from the resulting counter-attack, Muller broke free into a one-on-one with Pickford. Muller's finishing was uncharacteristically poor, putting the ball wide.

That miss encapsulated the luck that can impact international tournament football. Small errors and chance occurrences are so often the difference between victory and defeat. England were perhaps fortunate that Germany were unable to do more with the good positions they reached. At the same time, Southgate must be credited for limiting Kimmich and Gosens, and also for staying loyal to Sterling, the man who changed the game.