England have defeated Germany 2-0 at Wembley Stadium in a redemptive performance for Gareth Southgate's men, as the Three Lions progress impressively into the quarter finals.

This historic fixture began with England making a tactical tweak, starting with a back three as they did throughout their 2018 World Cup campaign.

Germany were the stronger out of the blocks, starting with a positive intensity and controlling the ball. Their high-press forced sloppy turnovers from England and allowed the Germans to put the home side under pressure.

However after the first ten minutes, the first-half was largely controlled by Southgate's men, who commanded the flow of the game.

It was a first-half of many set pieces, with England looking to threaten from many free-kicks and corners. While Sterling was running Germany ragged and Saka looked a creative threat, they struggled to get Kane into the game, who only had 2 touches in the first 30 minutes.

The biggest chance of the half for Germany came in the 32nd minute on the counter attack. Havertz played the ball through to Werner, whose first time shot across goal was saved expertly by Pickford from short range.

England's best chance came right at the end of the half, when Sterling again drove towards the box. He was tackled, but the ball ricocheted to Kane deep in the box. The front man took a touch and looked certain to score, only until a brilliant intercepting challenge by Hummels.

At half-time, while England looked slightly more in control of the match, both sides posed a goal threat with the potential to break the game open.

The second half started much in the same vein as the first, with both sides sustaining the high tempo of the match.

The second half saw both sides once again have their fair share of possession and opportunities on goal, while the back threes of both teams looked very sturdy.

However there was a sense that this game was teetering on a fine edge, with the fixture ready to explode at a moment's notice.

And explode it did in the final fifteen minutes of the match.

In the 75th minute, Raheem Sterling, an ever-ready beacon of creativity for England, picked the ball up to start another attacking move. Sterling played the ball into the front-man Kane, who with his back to goal passed it out to the substitute Grealish. Grealish in typical fashion played the ball out to Shaw on the left, whose beautiful low cross fizzed into the box, inviting Sterling the finish off the move he started. Sterling smashed home his 3rd goal of the tournament and sent Wembley stadium into hysterics.

Minutes later however, it looked as though England had thrown away their lead. Sterling, the hero inside Wembley, played a poor back pass that was intercepted. Havertz on the counter played the ball through to Muller who was easily one on one with the goalkeeper, but despite Muller's countless amounts of experience, he put the ball wide of the post, to the agony of the German fans.

At this point the stadium was raucous, the intensity of the match reaching its apogee.

In the 86th minute, England hit Germany on the counter attack when Luke Shaw intercepted the ball and drove towards goal. In reverse to the first goal, Shaw played the ball out wide to the mercurial Grealish, who put in a gorgeous ball into the box where the skipper Harry Kane headed the ball into the back of the net. It was pure jubilation inside Wembley as Kane broke his duck and surely sent England into the quarter-finals. 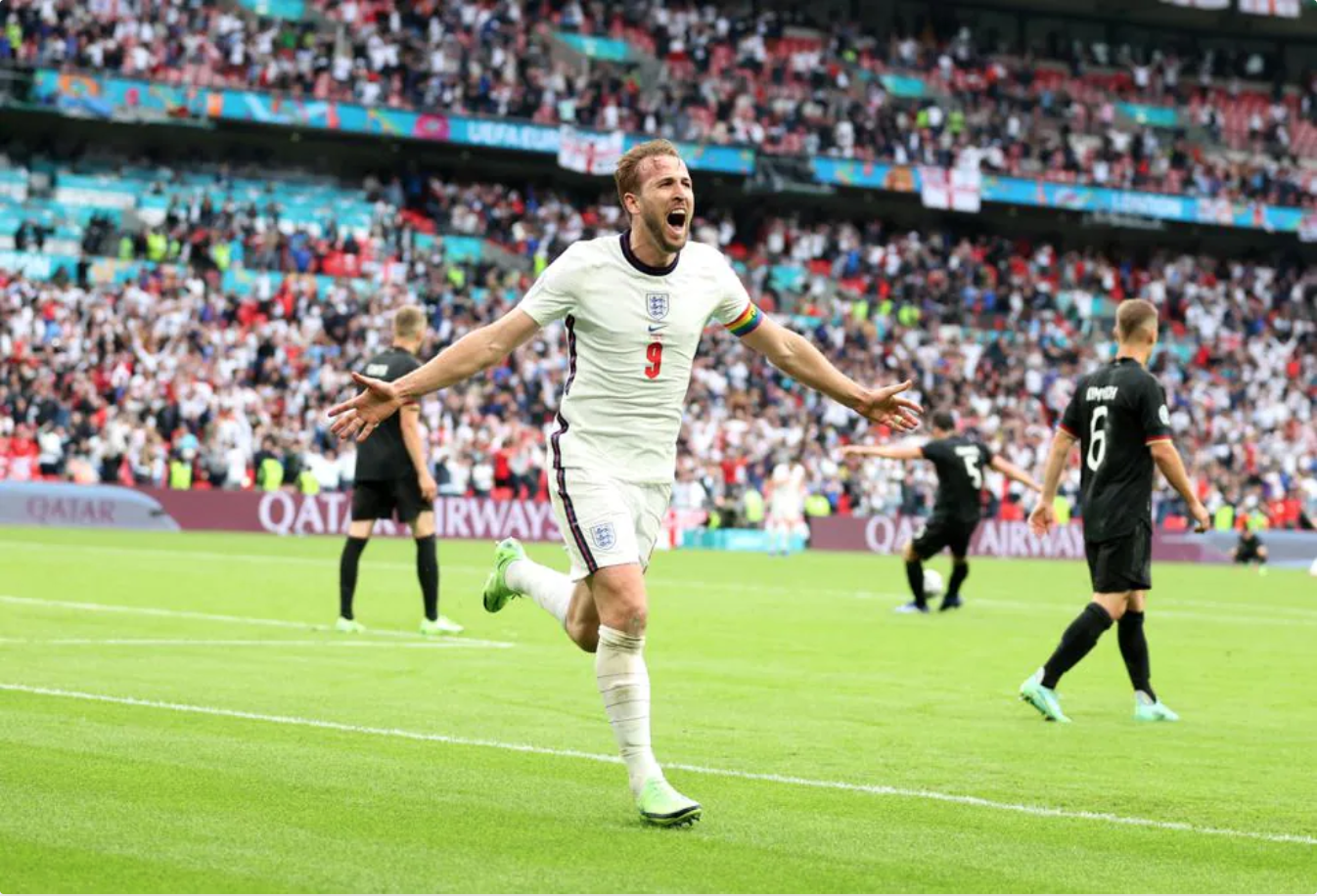 Kane celebrates his first goal of the tournament and putting England into the quarter finals.

After 4 minutes of stoppage time, Danny Makkelie blew his whistle to seal a thoroughly deserved victory for the Three lions and redemption for Gareth Southgate and his players, much to the delight of the home crowd in London.

For Germany, it is another disappointing major tournament, after only just qualifying to the round of 16 a few days earlier. It is also the end of the road for Joachim Low, a mainstay of the German national setup since his appointment as manager 15 years ago in 2006. He leaves Die Mannschaft with the glory of their 2014 world cup victory, but in slightly disappointing circumstances after another underwhelming tournament. 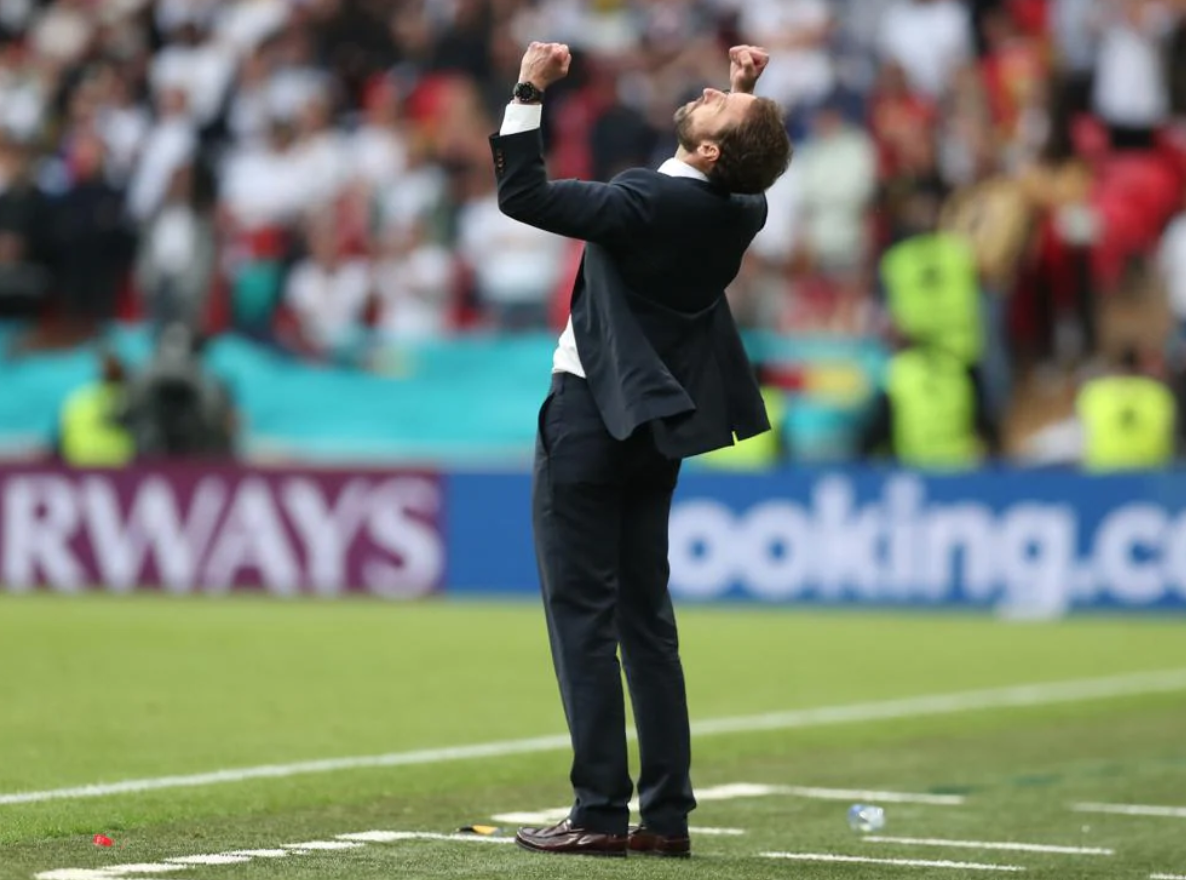 For England, they now will play in the quarter-finals against the winner of Sweden vs Ukraine at the Stadio Olimpico next Saturday. After beating Germany, England will be strong favourites to reach the final of the Euro's with their side of the draw opening up. They look great up front, with plenty of attacking talent and Kane finally on the scoresheet. They were also terrific in defence, with Maguire and Stones rock solid at the back, and Pickford impressive behind them. Is it finally coming home?

Man of the Match:Raheem Sterling