The fairy-tale continues for Denmark as they defeat the gallant Czech Republic with a 2-1 victory in Baku.

The match began in the unfamiliar humid climate of Azerbaijan, with all the elements of an intense quarter final, a replay of the fixture at Euro 2004 when the Czech's triumphed 3-0 against the Danes.

While both sides came out with intensity, with many committed challenges in the opening minutes, it was the Danes who were quick to prick the Czech's bubble.

Winning a corner in the 5th minute, it was the wing-back Stryger Larsen whose ball into the penalty area found the unmarked head of Thomas Delaney. The central-midfielder sent his header from the penalty spot past Vaclík into the bottom left corner. While it was a strong header, it was a cheap goal for the Czechs to concede and it sucked the atmosphere right out of the Czech side. 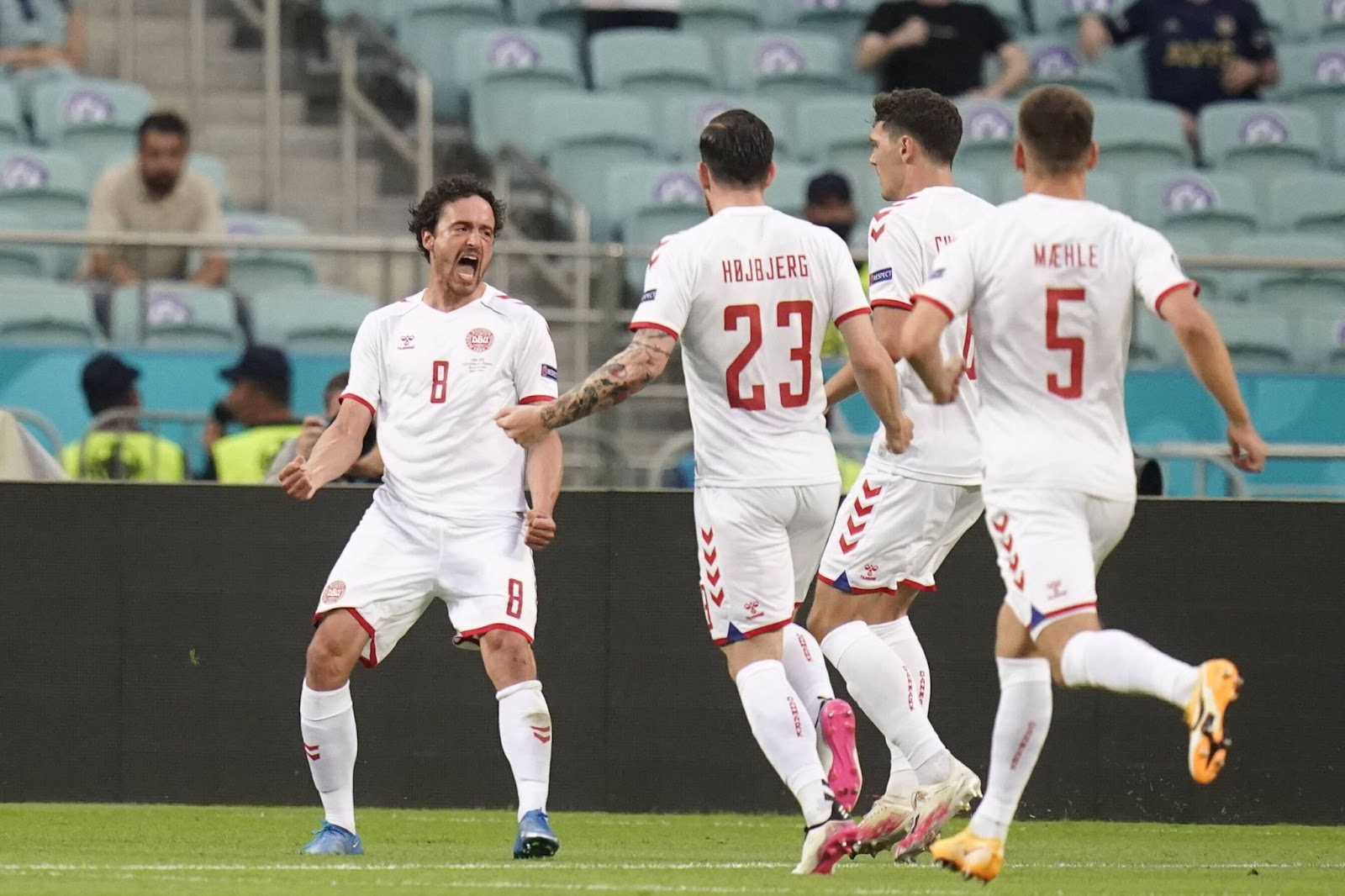 For the next 10 minutes it appeared that the Czechs had been sent into a stupor, sucker-punched by the early blow from Denmark. Denmark had full control of the game and the Czech's seemed helpless early on.

In the 17th minute, from a Czech corner, Højbjerg played an exquisite long ball up the field which found Damsgaard in space. One on one with Vaclík he played his shot past the keeper, but the effort was tame and cleared easily by Coufal.

However as the game progressed, the Czech side led by the skipper Souček slowly woke from their slumber and looked to get into the game. They looked the most likely from the plethora of set-pieces they were awarded in the first-half.

They had a few decent chances on goal, but lacked the quality up-front displayed by the Danes, and were often met defiantly by the gloves of Kasper Schmeichel.

The Danes with the advantage seemed content to defend strongly and hit the Czechs on the counter attack, which they did with clinical dynamism in the 42nd minute.

Joakim Mæhle, spoken about ad nauseam in the build-up, was played into space down the left-wing behind Coufal, and put in a jaw-dropping outside-of-the-boot cross into the area. His delectable cross went over the head of Braithwaite and found Kasper Dolberg who calmly side-footed the ball into the top of the net. 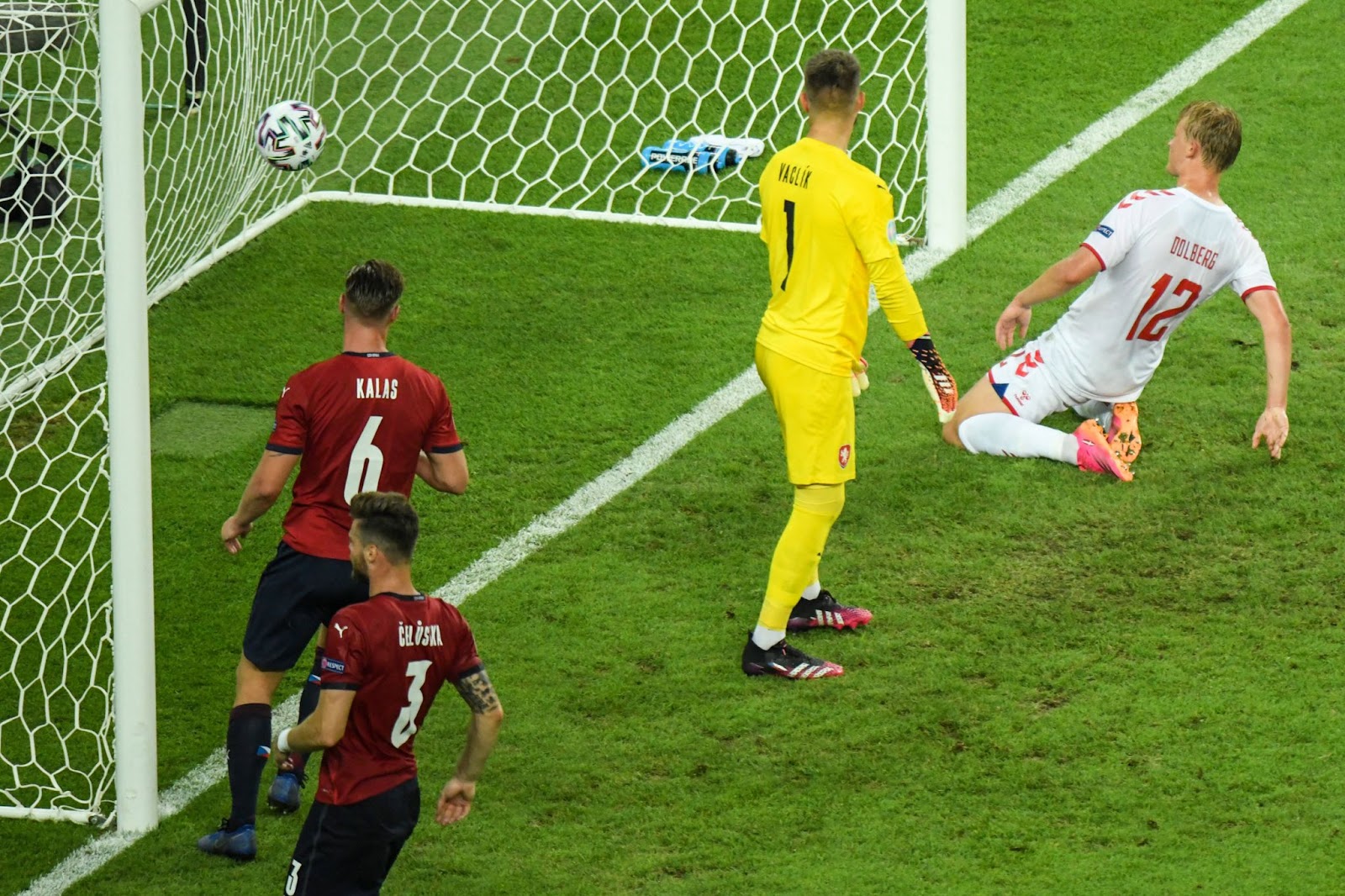 At half-time the Danes were 2-0 up and looked in complete control going into the break. It would be one heck of a trip up the Sněžka to get back into the game.

However it was as if manager Jaroslav Šilhavý had set firecrackers off in the dressing room, as the Czech side came out in the 2nd half with enormous positive intensity. Within the first 2 minutes from kick-off, the Czech's had already forced 3 saves from Kasper Schmeichel. The Czechs were playing with directness and urgency; they were in a hurry.

Their positive start was rewarded in the 49th minute, when Coufal played a cross into the box from a more central position which found its way to the talisman Patrik Schick. The striker hit his shot across his body and across the goalkeeper, with a sprawling Schmiechel unable to stop the ball going into the bottom-left corner with his outstretched arm. It was Schick's 5th goal of the tournament, equalling Ronaldo's tally to make him the tournament's equal leading scorer. Game-on.

The dynamic of the match had completely changed, with the Danes losing all composure and the momentum all with the Czechs. Šilhavý's two changes at half-time, bringing on Krmenčík and Jankto, paid dividends as they looked full of running and creativity.

After the early Czech flurry, the Danes tried to slow down the game and sure enough the frenetic high-tempo Czech side couldn't sustain its early dynamism.

Substitute Youssef Poulsen, back from injury, was influential, proving dangerous on the counter with many line-breaking runs from inside his own-half ending in goalscoring opportunities.

As the game went on, the toll of tournament football was clear, with both sides out on their feet; the exhaustion obvious.

Vaclík made a strong save in the 82nd minute to deny Joakim Mæhle from close-range, but despite their best efforts the Czech's were unable to find that desired second goal.

After 6 additional minutes, Björn Kuipers blew his whistle to end the match, sending the Danish fans into delirium in Azerbaijan.

While heartbreak for the Czechs, it was beautiful scenes for the Danish players, who have endured so much in this tournament, and were clearly overjoyed in reaching the semi-final after such a traumatic beginning to the tournament.

While not their best performance, they were deserved winners and played with a consummate professionalism appropriate for the quarter-final stage.

Kasper Hjulmand's men will now face the winner of England and Ukraine in Wembley on Wednesday in another instalment of this fairy-tale story.