​Espanyol & Thomas N'Kono: Making of a legend & hero to Buffon

Espanyol legend Thomas N'Kono's unique career made him a trailblazer for African goalkeepers in Europe and inspiration for LaLiga shot-stoppers of the past, present and future.

A highly decorated international with Cameroon for nearly 20 years, he became much loved throughout LaLiga during almost a decade in Espanyol's first team during the 1980s, and still contributes valuably as a coach at the RCDE Stadium.

Born on 20 July 1956 in Dizangue, N'Kono came to prominence at Canon Yaounde, where he won five national titles and two African Champions Leagues. Outstanding performances for Cameroon at the 1982 World Cup in Spain, when as national captain he conceded just one goal in three games, led to a move to LaLiga with Espanyol.

N'Kono kept a clean sheet in a 1-0 over Racing Santander at Espanyol's then Sarria stadium on his LaLiga debut, and quickly established himself as first choice. During 241 LaLiga games over eight seasons he became a firm favourite among Periquitos fans due to his razor-sharp reflexes, superb athleticism and strong personality and leadership. These were often all displayed when denying neighbours Barcelona in Catalan capital derbies, such as the 1-0 home victory at Sarria in December 1983. There was also a famous clean sheet in a 2-0 win over Real Madrid in March 1985.

Another highlight was Espanyol's run to the 1987/88 UEFA Cup final, with future Barcelona coach Ernesto Valverde and blaugrana forward Angel 'Pichi' Alonso in the team, only to eventually lose out heartbreakingly to Bayer Leverkusen on penalties in the decider. 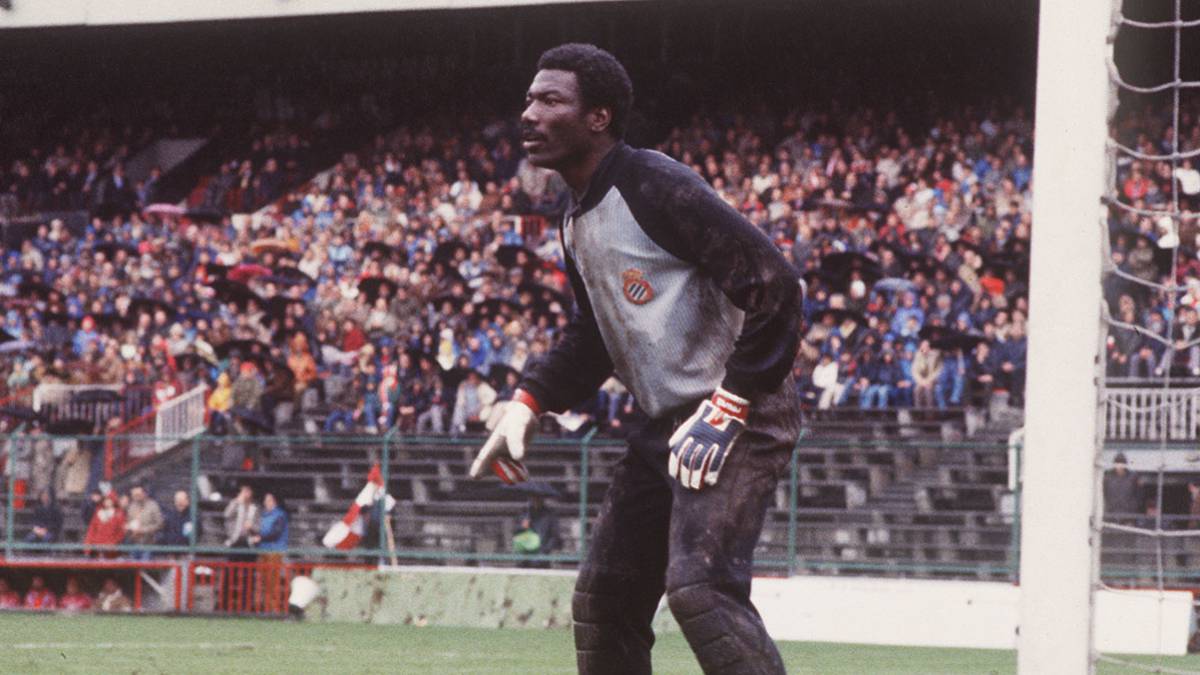 By the time he left Sarria in 1990, N'Kono had played more times for Espanyol than any foreigner and featured in more LaLiga games than any other Cameroonian in history. While both those records have since fallen – to future colleague Mauricio Pochettino and fellow countryman Samuel Eto'o – N'Kono without doubt remains one of the most iconic figures in LaLiga history.

There was also international fame; his 112 Cameroon caps included winning the 1984 African Nations Cup, and memorably helping the Indomitable Lions shock holders Argentina 1-0 in the opening game of the 1990 World Cup. In fact, his performances in reaching that tournament's quarter-finals in Italy inspired a 12 year old Gigi Buffon to become a goalkeeper and to, years later, name his son Thomas after his idol.

After leaving Espanyol, N'Kono stayed in Spain's north-east, playing for Catalan clubs Sabadell and Hospitalet before spells in Bolivia [where he won two league medals with Bolivar de la Paz], Brunei and Indonesia before finally retiring as a player aged 45.

His coaching career kicked off when helping Cameroon to win gold medals at the 2000 Olympics, when the goalkeeper was then 16-year-old Carlos Kameni, who would later follow N'Kono in starring in LaLiga with Espanyol. Another protege was Jacques Songo'o, who won the LaLiga trophy with RC Deportivo in 1999/2000.

Since 2003, N'Kono has worked back at Espanyol, first training the club's young goalkeepers, then using all his experience and knowledge when working with seniors including Gorka Iraizoz, Kameni, Kiko Casilla, Pau Lopez and current number one Diego Lopez.

A role-model for a generation of African goalkeepers, and now a nurturer of emerging new LaLiga talents, N´Kono's unique career makes him one of the most respected and loved figures in Spanish, African and world football.