COMMENT: A young player breaking through. It offers a team potential. It gives fans hope. And in Mikel Arteta's case, it also generates patience, amongst the support and the higher ups...

Victory at Slavia Prague on Thursday night was proof enough. Not so much the emphatic 4-0 scoreline, but more the manner in which it was achieved. If there's any doubt about why no-one inside Arsenal are wavering on Arteta, then you only need to consider how his team won in Prague to reach the Europa League semifinals.

Alexandre Lacazette, with his two goals, dominated the scoresheet. But it was Emile Smith Rowe, after being denied Arsenal's first by VAR, who laid on the assist for Nicolas Pepe to open the scoring. Then it was Bukayo Saka's turn. First winning the penalty converted by Lacazette before sinking Ondrej Kolar in Slavia's goal with a low left-foot drive for the visitors' third.

Three goals in the space of six minutes and all with an academy graduate's involvement. Saka and Smith Rowe were the two youngest players on the pitch - and also the most influential. For this night, at least, we saw potential realised.

Coming off the bench was another academy kid, Folarin Balogun. It was a gesture from Arteta as significant as any we've seen this year. Less than 48 hours after announcing Balogun would sign a new contract. In a week when we're learning of David Luiz being allowed to run down his deal; potentially Lacazette being sold. After months of spinning his wheels, Arteta gave Balogun, a fresh chance. It was only for the final minutes, but in this week the decision spoke volumes.

After all, it wasn't a fortnight ago that Balogun appeared lost to the club. With his deal inside it's final six months, the striker was being courted by clubs in Germany and France. He had two solid pre-contract offers on the table and enquiries from 15 others. However you sliced it, he was off.

But this month, Arteta found a breakthrough. Something was shared between manager and player to produce the U-turn. A guarantee? A playing promise? Perhaps. But those in and around the deal insist no such assurances were made. 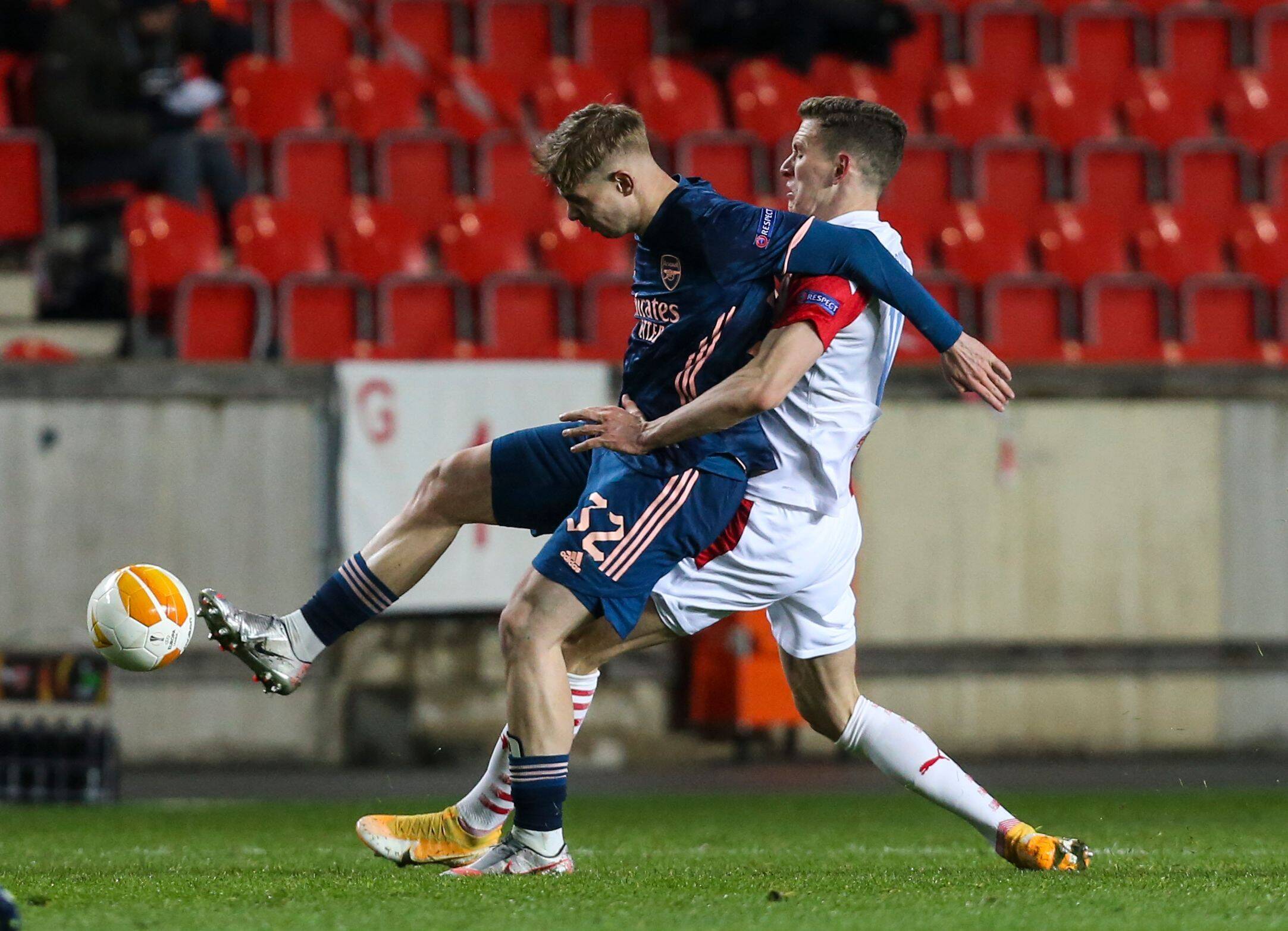 But Arteta did sell an idea to Balogun. A project based on youth. On himself. On those he came through at Hale End with. The emphasis on this cycle. In this Arteta era. It's going to be youth. The mainstays of the XI will be the likes of Smith Rowe, Saka and Gabriel Martinelli. And Balogun will also have his part to play.

Discussing how he convinced Balogun to rethink his exit plan, Arteta said: "Once you understand the position of him, then try to explain what you want to do, how involved he is going to be in the project and how."

It's no unique conversation. The very same thread has been raised in chats with Martinelli. The Brazilian, outstanding for victory at Sheffield United, was back on the bench for Thursday night. But this is Arteta's management. There's a plan in place - and for each individual youngster. For the manager, Prague on a Thursday night wasn't the game for Martinelli. But an all-but-down Blades team at Bramall Lane was.

"Gabby is having the right path and the right development," Arteta said after seeing his young striker produce a goal and assist in the 3-0 win on Sunday.

"He's got an incredible attitude and talent, and has his entire future in front of him. What we need to do is manage that and try to give him the right amount of minutes and the right games to develop and get better."

You can argue the rights and wrongs of this. But what you can't debate is the transparency Arteta is providing fans in his team selection. This team is in transition. Arteta. The club. They're throwing their lot in with players who will need time and patience to grow. It's an approach which has Arsenal now in the final four of yet another Cup competition. Though languishing mid-table in the Premier League.

And watching on... indeed waiting... is Unai Emery and his Villarreal. The Yellow Submarine will be Arsenal's opponents for these Europa League semifinals. Frustrated. Aggrieved. Those emotions will be dismissed by Emery in the lead-up. As will talk of revenge. But you can understand Villarreal's coach feeling at least miffed at the fact - as stated this week - that his Arsenal were ten points better off than Arteta's team with the same amount of Premier League games in charge. The man in today's Arsenal dugout has copped nothing like the criticism his predecessor endured from fans and the old London Colney Boot Room in the media.

But Emery didn't have these kids. He introduced them. He played them. But with eighteen months of football and experience in their legs, it's his successor who's benefitting. Not so much in results, but in performances. And the promise and potential these performances offer.

It's buying Arteta time. It's giving him room to work without needing to address every ex-player with an opinion to sell. And it's allowing him to convince the likes of Balogun to stick around and be part of this long-term "project".

It's clear the board and their manager are in sync. Luiz will go. Lacazette could also. Hector Bellerin another on shaky ground. The kids Emery first brought through offering enough for management to base a new project upon - and to back Arteta's management of them in the process.

It's a plan built on potential. Of what could be. And though they sit mid-table, it's granting Arteta the security in his job that the likes of Emery could only wish for.