On Wednesday night, Manchester City triumphed away to Real Madrid in the first leg of their Champions League second round tie. The 2-1 win, earned on the back of a solid defensive game plan, was perhaps one of Pep Guardiola's most important victories since he moved to England.

Just four days before City toppled the Spanish giants on their own soil, Aston Villa lost comfortably to Southampton. The 2-0 defeat was their third loss on the bounce, leaving them dangerously close to the Premier League's relegation zone.

So when Manchester City and Aston Villa meet this Sunday in the Carabao Cup final, they couldn't do so under more contrasting circumstances. While one team has a top four spot all but wrapped up and is on course to reach the Champions League quarter-finals, the other is simply hoping to stay in the top flight.

The main question ahead of the final, then, is this: Is there any way Aston Villa can compete?

It says a lot about Manchester City's quality that Real Madrid didn't even want to press them that high. Zinedine Zidane had one midfielder step up to support Karim Benzema defensively, but Real found it hard to get effective pressure going against a team that moved the ball so quickly and precisely. And, whenever the ball went back to Ederson, the La Liga side stopped pressing altogether.

Ederson's kicking is legendary. The Brazilian can find almost any teammate anywhere on the pitch with the ball at feet in his own penalty box. Both in terms of kick distance and accuracy, few goalkeepers can match him.

It would be unwise for Aston Villa to try something even the great Real Madrid didn't attempt, so a high press isn't a serious option for Dean Smith and his players this weekend. Instead, they should be focused on keeping their shape and denying space behind and between the lines as much as possible.

Manchester City like to dominate the ball and are excellent at finding pockets of space in defensive blocks, with pinpoint passers like Kevin De Bruyne and intelligent movers like Sergio Aguero. With this in mind, Villa should set up defensively to block, congest and stifle, rather than to press, rush and force. 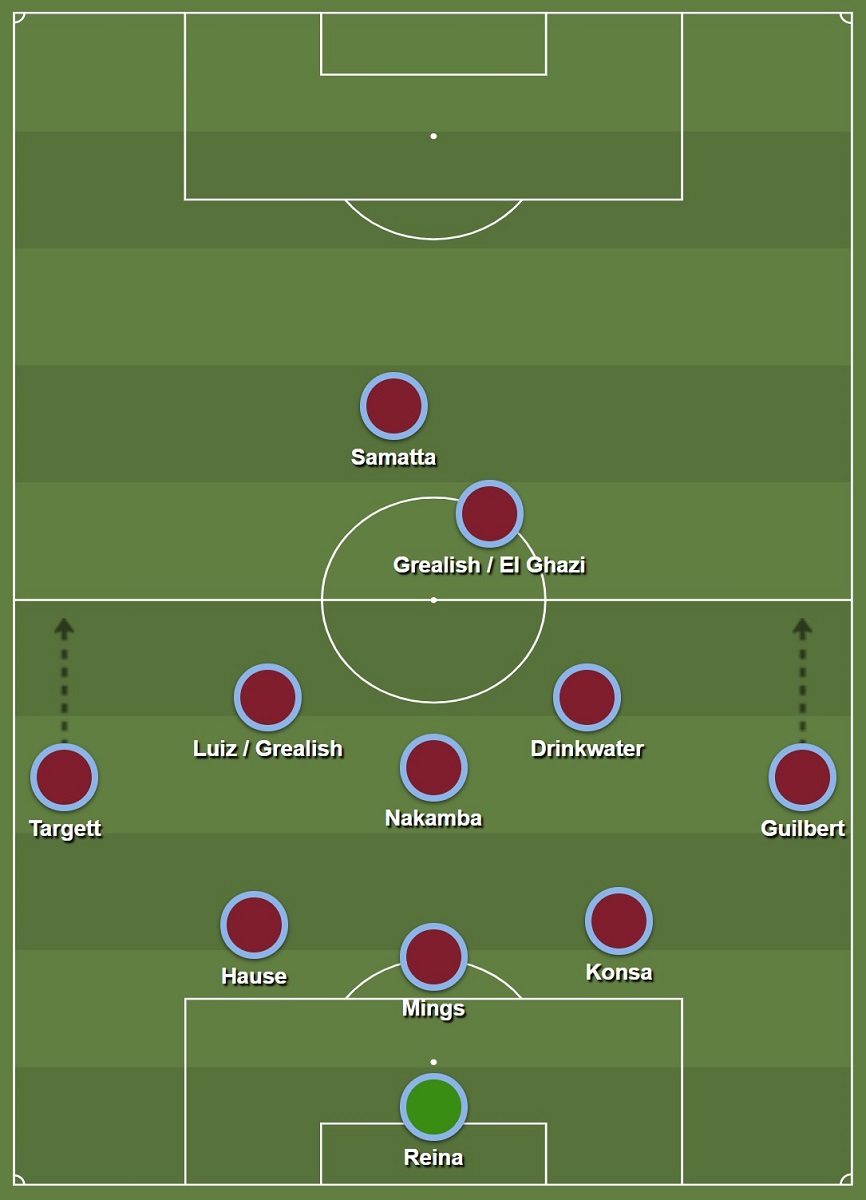 The above is a possible defensive setup for Aston Villa this weekend. They have gone with a back three consistently of late, but usually opting for a 3-4-3. Here they could go with a 3-5-2, dropping a forward for an extra midfielder. This would give them greater numbers in central areas and help to take away spaces that City could otherwise play through.

Rather than press City's centre-backs, Villa's front two should sit off and focus on blocking passes into midfield with the aim of forcing City possession wide. Once the ball goes wide, the front two and central midfield three should then readjust their positions to continue screening passing options back inside. Meanwhile, the ball-side wing-back could go up to press the ball and the rest of the back five could shift across.

By not pressing and instead denying passing options and space, Aston Villa can slow the game down and stultify Manchester City's attacking game. Sitting in a low 5-3-2 defensive block, they should look first to reduce risk against a possession-dominant side.

Aston Villa fans are anything but unanimous on who should be their starting goalkeeper this Sunday. With Tom Heaton out injured, Pepe Reina has taken the No.1 spot recently, though some believe Orjan Nyland should start. This author believes Reina is the more sensible pick for tactical reasons.

Forgetting Reina's big-game experience, he also offers more in possession. The Spaniard is comfortable being involved in build-up, and that could be utilised in a number of different ways this weekend.

Firstly, his comfort on the ball could help to draw out Manchester City. Pep Guardiola likes his team to press high, and they will probably try and do that on Sunday. Having a goalkeeper who is happy and able to receive the ball, control it, and then distribute to nearby teammates under pressure could allow Villa to invite and then beat the press – an example of this is seen below, where Reina combines with his centre-backs to out-play Tottenham's pressing. 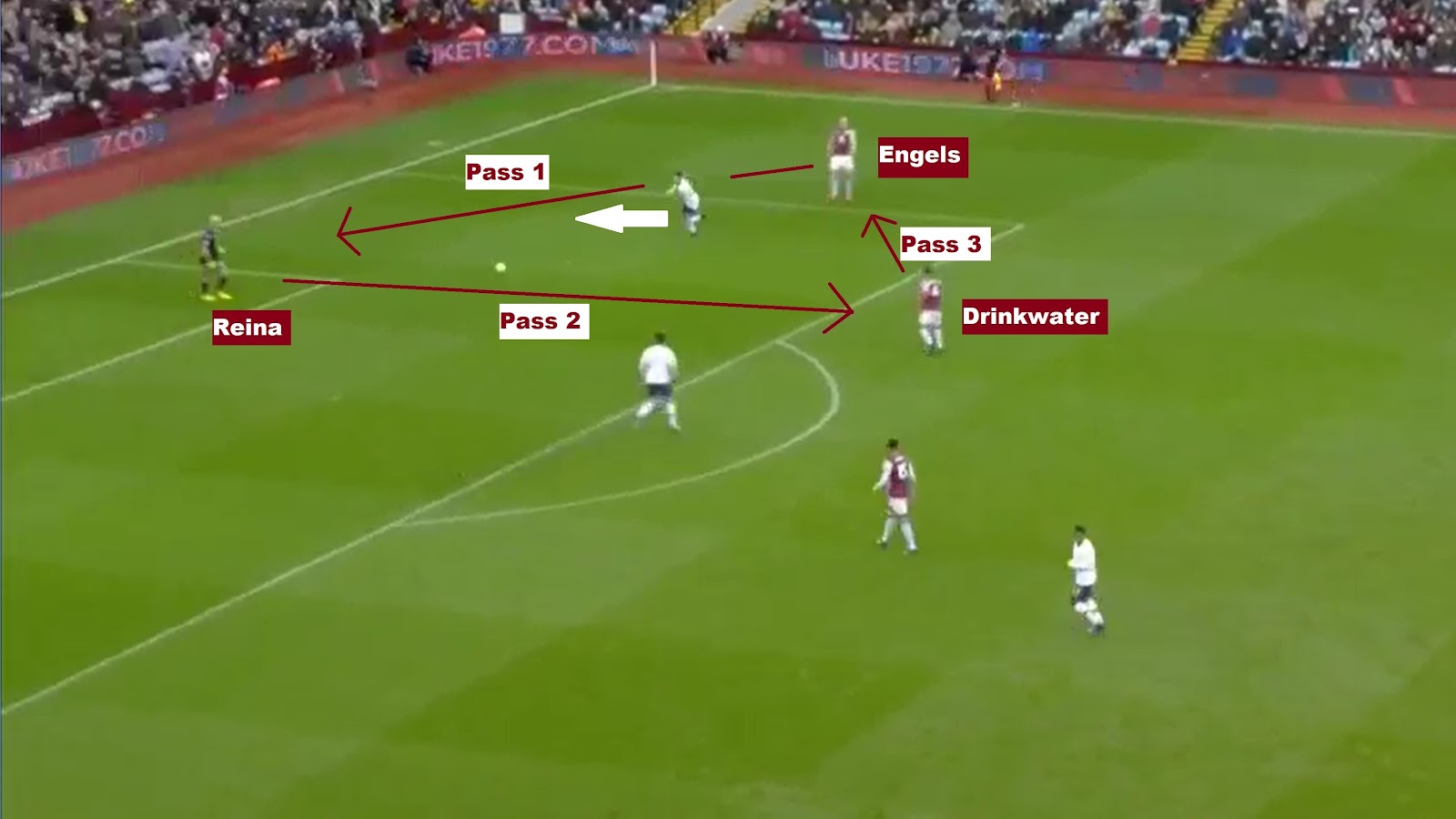 Secondly, Villa are likely going to spend large periods of this game without the ball. The last time these two sides met they had just 29% of possession, and that was a home game for Villa – it's unlikely to be much different on neutral turf. In these games, resting on the ball is a good way for the defensive side to regain energy, composure and organisation. Passing it around defence without intention to go forward is one way of doing this, and having a goalkeeper like Reina can help.

Manchester City have been pressing in a 4-4-2 recently, with De Bruyne supporting the striker in closing down centre-backs. Real Madrid struggled to play through this on Wednesday night and ended up trying to go around with quick diagonals to their wide men, but they aren't the only team that has struggled.

The below graphics show City pressing Tottenham Hotspur. As Spurs try to play out, their centre-backs come under pressure from De Bruyne and Aguero. Attempting to play into midfield, the pass is intercepted by City right winger Riyad Mahrez and an immediate counter-attack is launched. 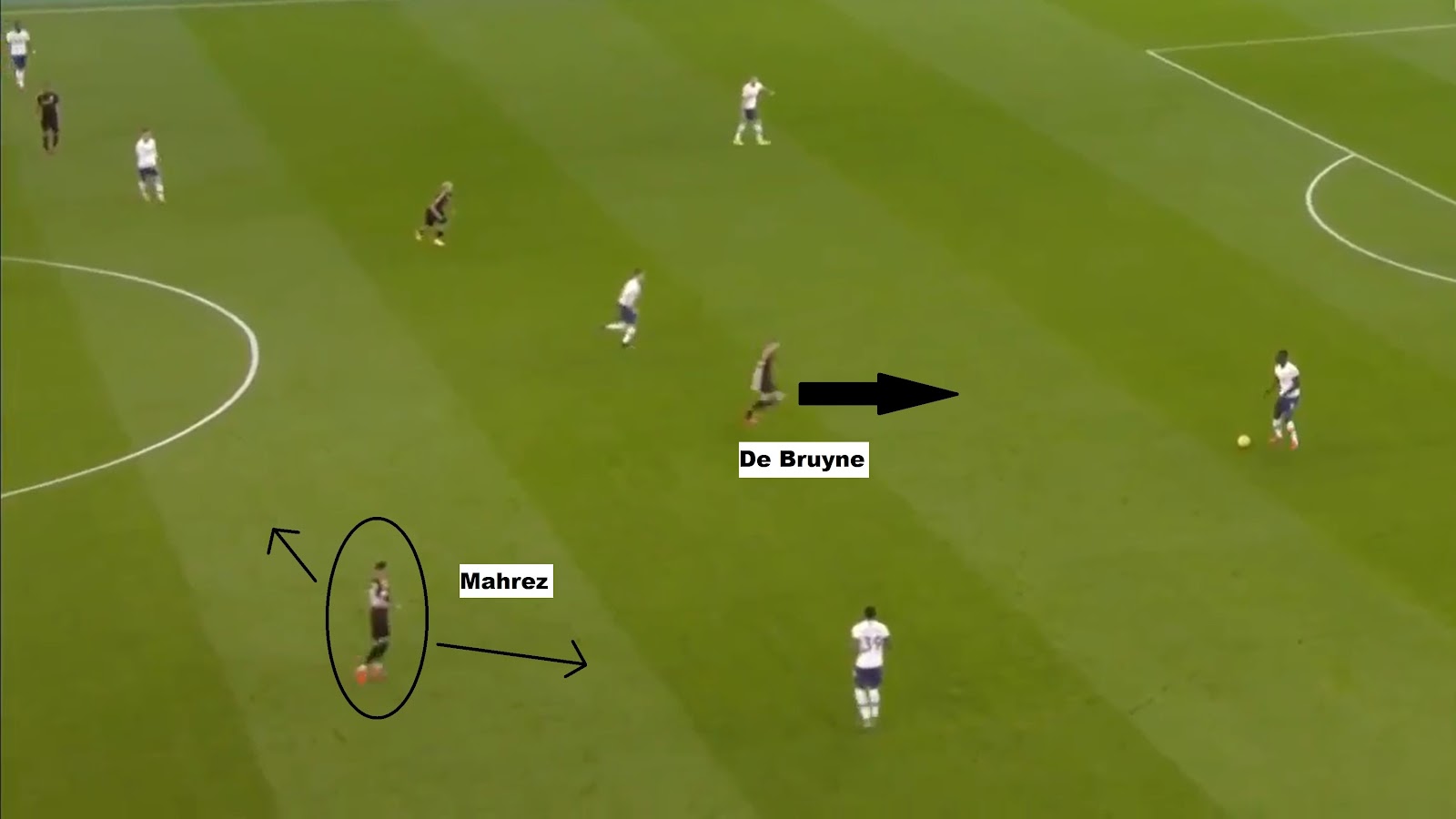 Aston Villa simply do not have the quality to play through midfield against this pressure, so they'd be better off adopting a more direct attacking strategy. This is where their front two can come in handy, with Mbwana Samatta and a partner looking to make runs in the channels of City's back four and get onto balls over the top.

Reina can help out with this approach, too. As well as being comfortable receiving under pressure, the 37-year-old has always had decent long-range distribution from hand or foot. When he catches or saves, his throw-outs could be used to kick-start direct counter-attacks. Alternately, when Villa have possession, he could look for long balls in the channels between City's centre-backs and full-backs to find the runs of Samatta and either Anwar El Ghazi or Jack Grealish.

This direct is not just an attacking method, but a way of retaining defensive organisation. By going long and committing few players to the attack initially, Villa can keep hold of their shape. They can also turn the ball over in less threatening, more advanced areas of the pitch, reducing City's own counter-attacking opportunities.

Unfortunately, the simple reality is that Dean Smith could get his tactics exactly right and his team could lose anyway. The gulf in class between the two sides is just too great and all it takes is a moment of individual brilliance from an Aguero, De Bruyne, Mahrez or Raheem Sterling to change the game. But Aston Villa can maximise their chances of success with a sensible plan – congesting the centre, taking away space, and attacking quickly with Reina as their acting playmaker.