COMMENT: They're all looking for one. A goalscoring midfielder. A box-to-box player. As good in the tackle as he is at finishing at the other end. And Everton have found one. Rafa Benitez has found one: Abdoulaye Doucoure. At 28, the Frenchman is now threatening to fulfill the potential that had him earmarked as "destined" over a decade ago.

That was back in 2010 as Doucoure, then breaking through at Rennes, was regarded as one of the jewels of a special French generation. Paul Pogba, Samuel Umtiti, Geoffrey Kondogbia were all part of that group, as was Doucoure's now Everton teammate, Lucas Digne.

As mentioned, back then Doucoure was regarded as "destined" by France's best youth coaches. And they weren't alone. Chelsea tried - and failed - to tempt Doucoure to London at 16 years of age. The money and glamour couldn't persuade him. A few years later, in 2015, Watford received the same response: "It was a strategic choice to stay. I thought I would improve more by staying an extra year here. At 23, the financial is really not my priority".

But 12 months on, Doucoure had come around and agreed to make the move to England with the Hornets. Five years later and after a solid first season at Everton under Carlo Ancelotti, Doucoure is now playing at a level never seen by English audiences. In Benitez, he's found his Premier League version of Philippe Montanier. The Spaniard knows what he has in Doucoure. He knows he was held back by his predecessor. Ancelotti using Doucoure as more of a defensive screen than anything else. For Benitez, this was simply clipping Doucoure's wings.

“When you sign with a new club, you try to analyse your players," the manager declared last week, "their strengths and weaknesses, and if you can improve something or if you can reinforce something they are doing well.

“With Doucoure, it is very clear he has the energy, the potential to get into the box, and then I told him so many times, 'just go, don't drop off too much because you can be a threat in attack' and he's doing really well." 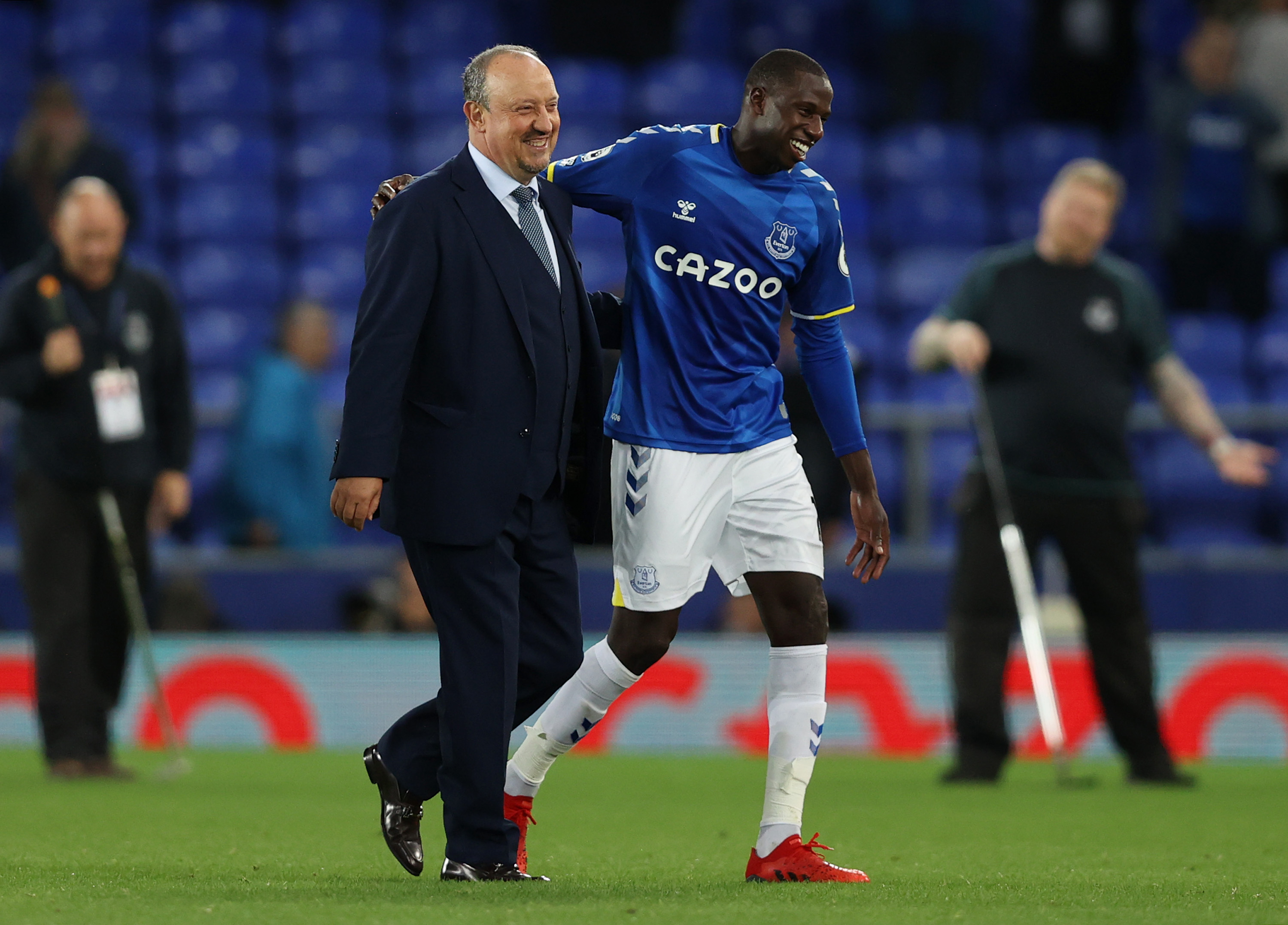 Benitez and Doucoure a partnership in success

Benitez's approach has come up trumps. In seven Premier League appearances, Doucoure already has as more assists and goals as he had during all of last season (2 goals, 3 assists). He's also been involved in 41% of Everton's goals.

The player, himself, conceding Ancelotti wasn't bringing the best out of him, “Last season, I had a deeper, more defensive role than in Watford", but now under Benitez his game - and career - has been transformed.

"I am learning with the manager every day," says Doucoure. “Everything changed in my game and my understanding of the game improved.

“The manager gave me a lot of advice – simple advice that makes a difference – and I try to take that on the pitch and help the team as much as I can."

Benitez hasn't stumbled upon something unknown here. Doucoure has always been a midfielder capable of getting around the pitch. As strong defensively as he is breaking forward. They're qualities that convinced Montanier to build his Rennes team around the then 20 year-old all those years ago.

"He always knew where he wanted to go and we knew at the club that he could go far," recalls Montanier, now in charge of Toulouse. "I had made him the cornerstone of my system, because he could be everywhere, at the recovery, at the finish, like a true modern box-to-box midfielder."

Now that promise spied by Montanier is being fulfilled under Benitez's guidance. And potentially, the manager's support of his No16 will save Everton millions.

To be fair, this column nominated a fully fit Jean-Philippe Gbamin as one bonus to fall into Benitez's hands this season. A £40m midfielder ready and available to the new manager after missing the year of Ancelotti.

But it's Doucoure, with the assistance of Benitez, who has transformed this Everton midfield. And with that, he's also transforming his career. It hasn't happened yet, but momentum is gathering across the channel. Demand is growing for Didier Deschamps to call up Doucoure to his France squad - something the lad from Mureaux is well aware of.

“I know that I have taken a step forward this season, we are talking a little more about me," Doucoure, who has repeatedly turned down Mali's overtures, said just this week. "If I am one day in the France team, it will be legitimate. I am a little underrated in France, as I have already said.

"It's not necessarily someone's fault, maybe it's due to the clubs in which I played. I feel the wheel is going to turn. I have my teammate Lucas Digne who is in the squad, it proves that by being at Everton, we can be selected."

And with form. With recognition. Also comes confidence. Not just on the pitch, but away from it. Doucoure's character as a leader is now beginning to show. They're the same qualities that had a 12 year-old Abdoulaye lobbying local council to build a pitch for the neighbourhood kids.

"We had meetings with the mayor and we came up with ideas for the neighborhood. I had managed to build a soccer field in mine when we didn't have one," says Doucoure, recalling the days of growing up in Vigne-Blanche. "Basically, I'm someone who likes to talk to people. In my school, I was a little leader, so this role allowed me to go to the front.

"I was not afraid to go to the grown-ups to explain their problems to them and since I loved football, my first idea was to build a field. A small synthetic, five-a-side court."

That determination and love for football has never faded. Indeed, the energy and drive of that 12 year-old Abdoulaye was again evident on Saturday for Everton's 1-1 draw at Manchester United. The only disappointment for Doucoure's growing fanbase that he was denied the chance to go toe-to-toe with Pogba after United's No6 started on the bench.

But with a manager who is playing him to his strengths, such opportunities will fall Doucoure's way. Benitez has found one. A free-scoring, box-to-box midfielder. And all it took was a little belief from the manager of what he'd inherited.