Don't do it! Why Ole & Man Utd should NOT give Haaland second chance

COMMENT: Ole Gunnar Solskjaer and that interview last week. Was he opening the door? Or simply being polite? Could Manchester United's manager actually try a second time for Erling Haaland? Indeed, should he...?

To be fair, this didn't seem some sort of strategic media placement. A conscious attempt to let Haaland and those around him know that United are interested in the Borussia Dortmund centre-forward. Oh, he spoke openly about Haaland, did Solskjaer. He spoke about their long-standing relationship. His thoughts on his ability as a player - and what he believes Haaland can achieve in the future. But there is the qualifier. A qualifier unmentioned. And that's why, for this column at least, you hope Solskjaer was simply speaking as a fan of Norwegian football - and not as manager of Manchester United.

Norwegian outlet VG pulled off a coup last week. It was an interview that went around the world. No messing about. They simply went straight to Solskjaer with the question: 'Do you feel that Manchester United can now fight for Haaland's signature in line with Real Madrid, Barcelona, Juventus and Manchester City?' The inference being, with United now sitting second on the Premier League table, they appear a much better proposition than a year ago when Haaland very publicly rejected both the club and their manager.

"Erling will have a fantastic career," he began. "I'm following Erling. I've always said that. Was it 18 months we had together or something (at Molde)? Almost two years, maybe. A wonderful time.

"He will definitely have a great career for both Norway and his club. He is doing incredibly well for Dortmund, so we'll see where he ends up. As a Norwegian and someone who has worked with him, it is of course fun that he does so well."

Of course, there was more. Solskjaer recalling a pre-match chat with a young Haaland at Molde in the middle of a form slump. That game he would score four goals in the first 21 minutes. But VG persisted, again asking Solskjaer about United's interest.

There's no doubt a fit and in form Haaland would improve this United team. Just as Edinson Cavani has managed to do this season. Now 34, the Uruguayan was always a stop-gap. A bit of relief while Solskjaer identifies his long-term centre-forward option.

A year ago that was Haaland. And that's just the rub. The qualifier. Solskjaer should be looking beyond the Norwegian to solve this problem. It was humiliation last Christmas. A public humiliation. He'd flown to Austria to speak with his former Molde protégé. So convinced of Haaland's commitment, he'd put off all other options. Yet with Mino Raiola pulling the strings. And the demands of Haaland's father, the former Manchester City and Leeds United midfielder Alfe-Inge. United just couldn't do a deal. 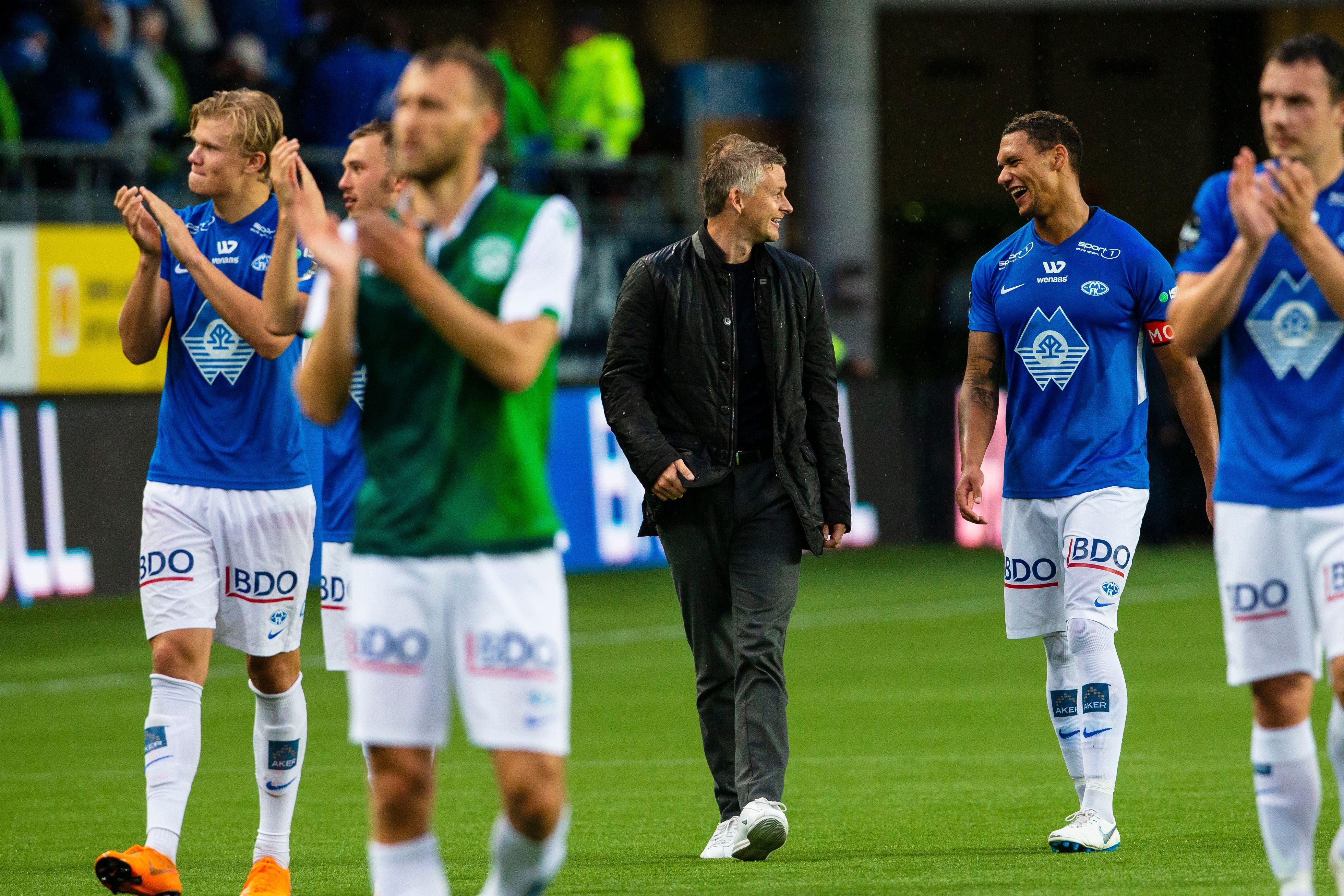 Haaland (L) and Solskjaer together for Molde

But Dortmund could. And it's significant that with BVB, for all this young talent they've spent millions upon acquiring, now struggling to get amongst the Champions League qualifying places, there is a very really prospect of Haaland being cashed in just 18 months after his arrival. And this is even before a cut-price €75m buyout clause comes into effect as demanded by Raiola. Those words from Uli Hoeness, Bayern Munich's former powerbroker, have more than ring of truth.

"If Dortmund buy a highly talented player and he plays well, you can hear a few months later - either from the club itself or from others - that he will be an object of sale at some point," Hoeness declared last summer. "I think that's unwise.

"How is a player supposed to absorb the DNA of a club 100 percent if he feels that he is an object of sale? It's not like that with us at all.

"We sign players to play for Bayern Munich, and never just for business reasons."

Dortmund, for all their claims, were always a stepping stone for Haaland's camp. Indeed, facing a €75m hole in their budget should a top four finish fail to be achieved, you just wonder how far they've stretched themselves this past year. At least if they sell Haaland this summer, they do so with some control...

And if he is sold, that'll be 18 months a Dortmund player. After just 12 months with RB Salzburg. A club hopper in the truest sense. No connection to a team's colours. No connection to a supporter base. But plenty in the bank account. With Zlatan Ibrahimovic now in the final stretch of his career, you can see Raiola managing Haaland in the same fashion.

The Swede is a great player. A great character. But no club legend. A cult hero, sure. But you don't associate any one club with Ibrahimovic. Putting down such roots clearly was never in the career plan of he and Raiola.

And for Ibrahimovic, you can add another of Raiola's clients in Paul Pogba. The same circus will be created around Haaland should he arrive at Old Trafford. He won't be allowed to settle. He won't be encouraged to settle. Agents. Sponsors. Hangers-on. Just as they've been with Pogba, they'll be in Haaland's ear pushing him to talk up his next move.

It's worth recalling the words of Gael Maehe, the agent who took Pogba originally from Le Havre to United. Maehe always saw United as a final destination for Pogba. And by all accounts, so did the player and his family. It wasn't until Raiola became involved that it all changed.

With Real Madrid and Barcelona pulling back their spending. Manchester City focused on bank rolling a Lionel Messi deal. And PSG still too big a fish in a small pond. United are emerging as the best option for Haaland and Dortmund to get what they believe he's worth.

But United should be bigger than that. They should mean more than that. A year ago, Solskjaer and the board were right not to cave into the Haaland camp's demands. No one player. No one agent's stable. Nothing is worth giving them a second chance.

You do hope Solskjaer was simply being polite during that interview last week.