Did Ole axe make difference? Why Man Utd need board with Edwards-type steel

COMMENT: The players can be blamed. The press. The exes. But as we see Manchester United playing their way into the Conference League, there really is only one group responsible for where the club currently sits...

Another limp performance. More points dropped. United shone for what? Maybe a half hour at best? And then it all fell away again. A 0-0 draw at home to Watford. Surely a banker if ever there was one. But not this season. A season which has United well on track to an unwelcome first - qualification for the Europa Conference League.

So who's to blame? The players? Ralf Rangnick? That's too easy. Indeed, Roy Hodgson, barely weeks into the job at Watford, subtly offered up a question which deserves examination: are United any better off than the day of Ole Gunnar Solskjaer's termination post-Vicarage Road?

Hodgson, observing from 60,000 ft, went into Saturday's game praising United. Not just for what they'd been producing under Rangnick, but for the campaign itself, including the work of Solskjaer.

"Yes, they've been quite good, I think," he said. "To be honest, I think they've been fairly steady for a period now.

"They were fairly steady under Ole, I thought. They're still in with a chance of top-four which is obviously important for them. But they were really in with that chance, I thought, with Ole as well."

Hodgson doesn't do mind games. Kidology. Instead, as a football man. Looking at the wider picture. He could see a team eking out results. Staying within reach of their set targets. And as he says, those goals remained alive even after the November meltdown in Hertfordshire. Which begs the question: where would United be with Solskjaer still in charge?

United have spluttered under Rangnick. But they've managed to get results. Nothing spectacular. Nothing even to offer some promise for a brighter future. But as Hodgson says, they've been "fairly steady". Even Saturday's stalemate fits into such a category.

And after 13 games in charge, that's basically all Rangnick can offer. That's 13 games which United have entered as favourites. The biggest test being Aston Villa away. Yet, they've managed to only win seven of them. Indeed, the best victory post the Ole era was days after his sacking and the triumph away at Champions League opponents Villarreal. A win produced with Michael Carrick on the touchline.

So it's a decent question: would United be in a better position if Ole was still in charge? Though there's an even more significant question worth asking: if this board had been around in 1990, would Sir Alex Ferguson have survived the sack? 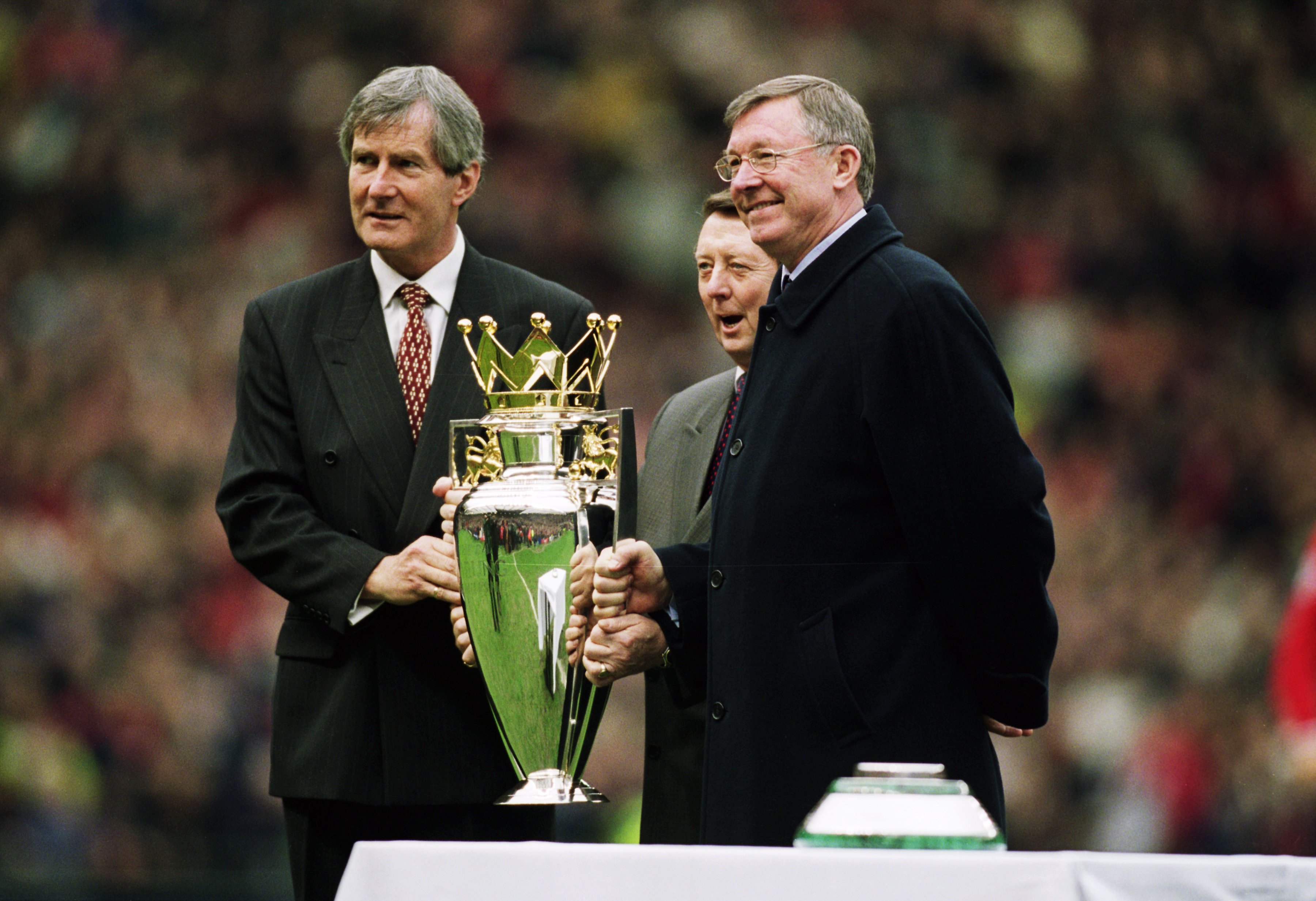 Edwards and Ferguson together with 2000/01 Premier League trophy

For this column, that's an easy one: it's a clear 'no'. The pressure. The toxicity. The obituaries. Old Trafford was teaming with all of it at the time. As bad as we saw this season with Solskjaer, Ferguson found himself in the same situation 32 years ago.

The difference was, Sir Alex had at the time a chairman who had thrown all in with him. Martin Edwards has always insisted he and his fellow directors never considered removing the Scot. That season United finished THIRTEENTH in the old First Division - though also famously lifted the FA Cup. The previous season, Ferguson had guided his team to an ELEVENTH place finish. In contrast, last season Solskjaer took United to a losing penalty shootout in the Europa League final and runners-up in the league. Yet Edwards could see what Ferguson was doing behind the scenes. He was sold on the potential of what was being put in place. Even the following season, United still only managed a sixth place finish. But Edwards and the club were repaid for that nerve and foresight like no other in this industry's history.

Cycle forward to this season and Ed Woodward, the now former vice-chairman exec, had his chance of an Edwards moment just weeks before informing Solskjaer of his dismissal. The story goes Woodward happened upon Solskjaer working in his office after hours. The Norwegian was putting together plans. Generational plans. Devising strategies which would last for years. Woodward was blown away and while so much of the press - particularly the local press - were calling for Solskjaer's sacking, he stood firm.

Unfortunately, that nerve only held strong for another few weeks. Where Edwards' decision to stand by Ferguson made clear the Scot was the most important man at the club. Solskjaer's dismissal was a triumph for the players. The leakers. Those outside making mischief. Just as it was when Jose Mourinho was dismissed. Louis van Gaal. David Moyes. The root problems at United remain.

Take the 60,000 ft view of Hodgson. Contrast what Solskjaer had delivered to this board and what Sir Alex had to Edwards all those years ago. And the Norwegian's dismissal is ridiculous. Farcical.

Thirteen games into this new era and the problems remain. We can blame the players. We can blame Rangnick. But the responsibility for this culture goes higher up. United need people of courage in the boardroom. Nerve.

Instead of Edwards, if this lot had been in charge all those years ago, Manchester United would be a very, very different club to what we see today.