Conte & Tottenham: What he will bring & what he needs for Spurs success

Any football team in the business of winning titles will want to hire Antonio Conte. The Italian has won the league with each of his last three clubs: Juventus, Chelsea and Inter Milan. He also over-achieved with an average generation of Italy players, taking a team with a front two of Graziano Pelle and Eder – respectable top-level strikers, but not world class – past Belgium and Spain into the quarter-finals of Euro 2016.

Tottenham Hotspur needed a top manager after their sacking of Nuno Espirito Santo, and they got one in Conte. But what can he do with this Tottenham team? Here, we at Tribal Football break down the manager's style, and what needs to be done if Conte is to add Spurs to his long list of title-winning sides.

In the past, Conte has favoured a back three system. With Chelsea, he brought in a 3-4-3 after a humiliating defeat to Arsenal. In that system, Chelsea went on to win the league and forced many of their Premier League opponents to re-think their own shape. It's no coincidence the back three experienced a rise in popularity during Conte's first spell in England.

With Inter Milan, he used a 3-5-2. The main differences between this and his Chelsea system were in midfield and up front. At Chelsea, he preferred a double pivot and a lone striker (Diego Costa) supported by two inside forwards (Eden Hazard and Pedro). At Inter, however, he generally went with a single pivot and two box-to-box midfielders behind a strike pairing of Romelu Lukaku and Lautaro Martinez.

Conte will almost certainly stick with a back three at Tottenham. As for his attacking play, it is usually based around drilled routines. Rather than implement a basic structure, train his players to find their own solutions and encourage individual creativity, he implements a more rigid structure with clear player roles and strict patterns that are organised and repeatable. This leads to quick one- and two-touch play, often feeding the striker directly to feet and then looking for combinations with the supporting players. When done well, it can be particularly effective to help a team play out of pressure.

Without the ball, Conte's approach varies. However, the common theme is for some kind of defensive block, as opposed to intense pressing. With Chelsea, he organised his team in a 5-4-1 block. Opponents had time to play out from the back, but there wasn't a lot of space between or behind. The aim was, and is, to slow opponents down, limit their options, win the ball in midfield, and counter quickly using the spaces left open when the opponent tries to attack.

Conte has been in charge of Tottenham for two games. So far, he has chosen the same system: a 3-4-3 like the one used at Chelsea. He has also picked the exact same starting line-up: Hugo Lloris as goalkeeper, a back three of Cristian Romero, Eric Dier and Ben Davies; Emerson Royal and Sergio Reguilon as wing-backs, Pierre-Emile Hojbjerg and Oliver Skipp in midfield, with Lucas Moura and Son Heung-min supporting Harry Kane up front. 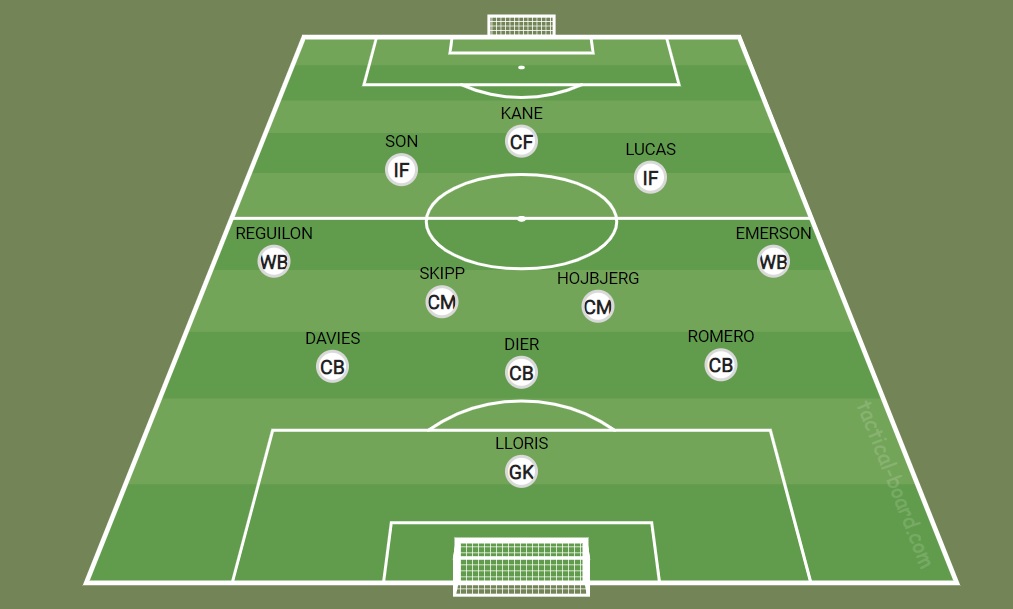 In Conte's first Premier League game as Tottenham boss, a 0-0 draw away to Everton, there were signs of things worked on in training. However, it's obviously too early for him to have established his usual regimented patterns of play.

The dynamic of the front three looks like a work in progress, with Kane, Son and Lucas struggling to combine with each other, while the defenders' attempts at finding the strikers directly were frequently intercepted. 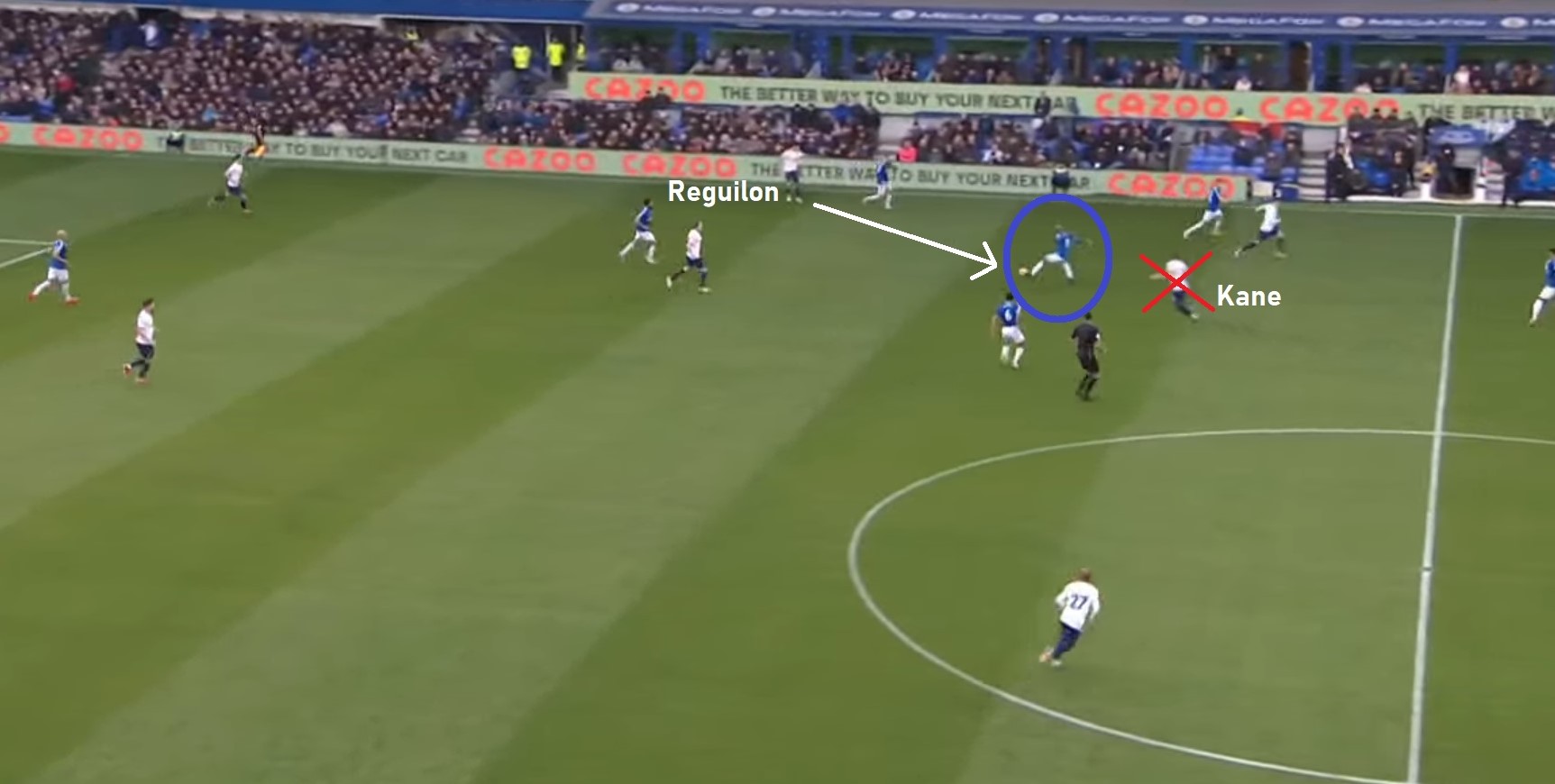 There was also an issue with the defensive line, as Tottenham almost conceded a penalty from a fairly straightforward ball over the top. There clearly isn't absolute clarity on whether they should hold position or drop back and protect the space behind, with some defenders operating on different wavelengths.

Over the next two months, Conte's patterns should gain more organisation and potency. And his 5-4-1 defensive block followed by quick counter-attacks should work for Kane and Son. However, there is a ceiling even to what someone like Conte can do with this Tottenham squad.

Tottenham fans were rightly excited by the appointment of Conte. Everywhere he goes, success seems to follow. However, Spurs have had three good managers over the last two-to-three years, yet have experienced no real growth. At a certain point, the focus must fall on the players, and which areas of the squad need to be strengthened.

Conte himself is aware of this. The contract he signed with the club was just 18 months in length, which sees him through what's left of this season and the next one. It isn't a long-term commitment, and he knows how sizeable the task ahead is. In his first press conference, he described the job as "a big, big challenge".

By the January transfer window, he should have improved performances to some extent. But to take that next step into the Premier League top four and beyond, changes need to be made to the squad.

In order to defend effectively in the 5-4-1 block Conte appears set on, Tottenham need a reliable last line of defence. That they currently do not have, even with the additions of Romero and Emerson in the summer. Ben Davies satisfies the need for a natural left-footer on that side of the central defence, but neither he nor Eric Dier can be classed as solid penalty box defenders. Conte will probably want at least one new centre-back proficient in the arts of reading play, heading and blocking to bolster his team's defence so they are less susceptible to balls over the top and crosses into the box.

It remains to be seen how, or if, Conte uses Tanguy Ndombele. In terms of pure talent, nobody in the squad can match the Frenchman. But he hasn't been relied upon fully by any of his three managers at Tottenham, and so far under the new boss he has only appeared off the substitutes' bench.

Conte likes to have at least one holding midfielder with the qualities to be a playmaker, setting the tempo. Hojbjerg is more of a ball-winner than a playmaker, and if Ndombele doesn't establish himself alongside the Dane in Conte's midfield, another new signing will probably need to be made.

Up front, a lot depends on how Kane, Son and Lucas adapt to the of play. In theory Kane is a perfect target for balls driven along the ground into feet, with good control and strength to hold off defenders. He can play lay-offs to runners in support, but it's unclear if Son and Lucas fit those roles. Traditionally, both are more effective offering in behind defences than in-between the lines.

Conte is a serial winner and should push the team back towards the top six, but this Tottenham squad has some holes in it. If they aren't filled by recruitment, then top six will likely be this team's limit, even with one of the world's best managers in charge.