One week after last season's Champions League final, a new English football season begins as reigning champions Liverpool take on FA Cup winners Arsenal in the Community Shield. Both sides will be keen to start the campaign with a trophy this Saturday, and here we at Tribal Football preview the game.

Jurgen Klopp finally conquered the Premier League in 2019/20, so it's unlikely he'll be experimenting with a successful formula. There have been rumours linking Liverpool to Bayern Munich playmaker Thiago Alcantara, which is a move that would potentially spark some significant tactical changes. But until those rumours become something more concrete, expect Klopp's side to look familiar.

In a recent friendly against Red Bull Salzburg, Liverpool lined up in their favoured 4-3-3 system, and they will almost certainly do so again versus Arsenal on Saturday. There will, as ever, be plenty of fluidity in the formation.

During build-up against Salzburg, Fabinho regularly dropped in between Joe Gomez and Virgil van Dijk, forming a back three that gave Klopp's side the numerical advantage against Salzburg's strikers. To his left, Georginio Wijnaldum rotated in and out of the traditional 'six space' in front of the centre-backs, while Naby Keita looked to find pockets further up the pitch in or around the right inside channel.

With Fabinho and Wijnaldum helping the centre-backs in retaining and progressing from the back, both Liverpool full-backs advance down their flanks and provide attacking width, in turn allowing Sadio Mane and Mohamed Salah to come inside. The full-backs are key in all stages of Liverpool's possession, including providing good crosses into the box. 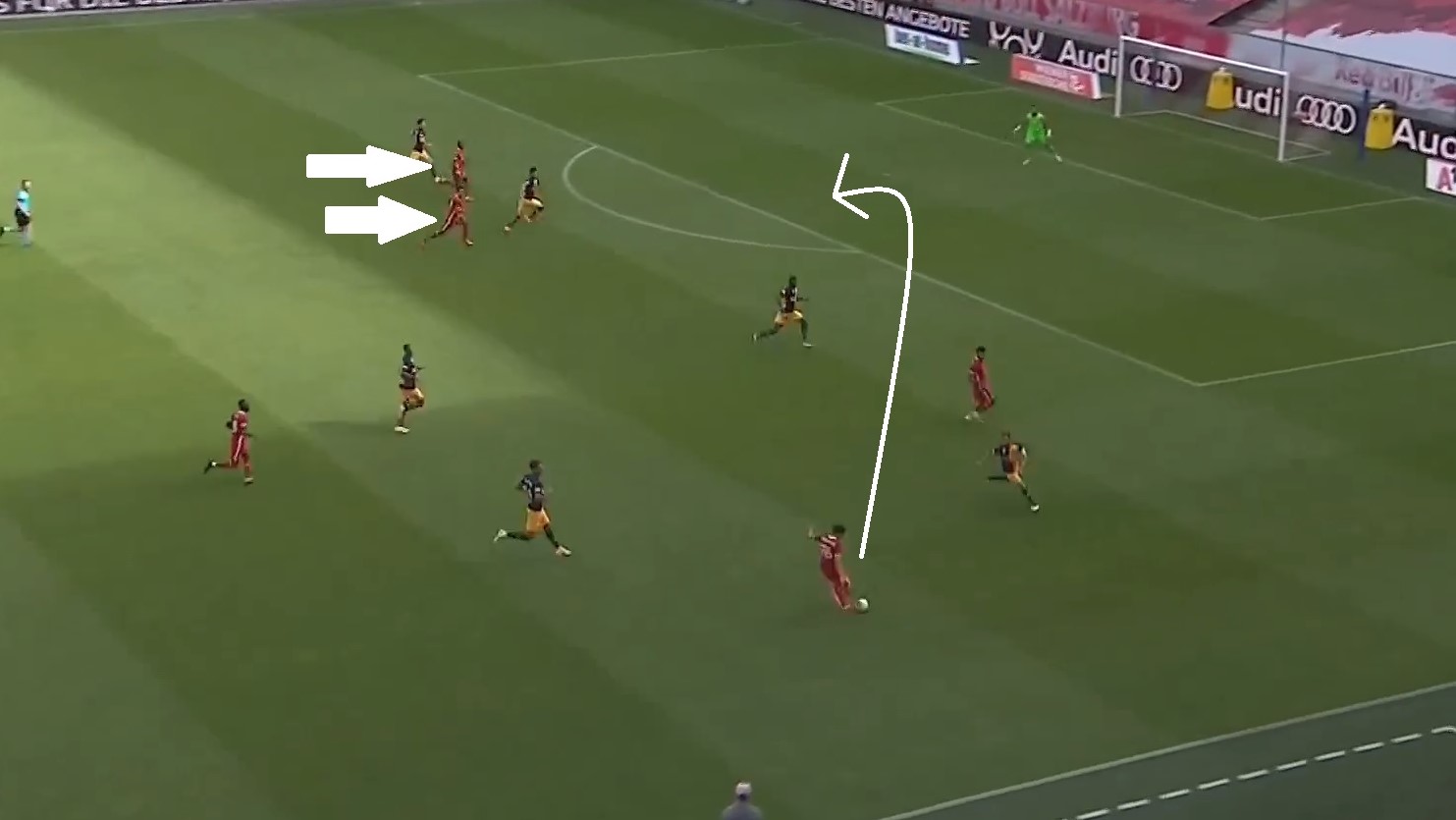 Van Dijk's range of passing opens up a lot of possibilities, primarily long balls for Salah to run onto. And even if he can't find the Egyptian, Liverpool are ruthless in transitions after the long ball, pressing their opposition aggressively and committing numbers around the ball before counter-attacking quickly through the pace of their frontline.

Liverpool will miss the injured Trent Alexander-Arnold's accurate switches of play and quality crossing, but with Roberto Firmino moving to create overloads, Salah and Mane attacking the channels, Wijnaldum hitting the box from deep to get his head on crosses, and Keita's skill on the dribble, they still have plenty of offensive options that can hurt Arsenal.

In their friendly with MK Dons, Arsenal set up in the same basic formation they ended last season on a high with: an offensive 3-4-3 that defensively becomes a 5-4-1. There were familiar names in the line-up, including goalkeeper Bernd Leno, Rob Holding and Kieran Tierney in the back three, Granit Xhaka in midfield, Bukayo Saka and Pierre-Emerick Aubameyang on the flanks. However, there were also some missing, namely David Luiz, Sead Kolasinac, Nicolas Pepe and Alexandre Lacazette.

With some new signings already secured in defender William Saliba and attacking midfielder Willian, there is also a possibility for new faces to make Mikel Arteta's starting line-up against Liverpool this Saturday. In short, there are a lot of moving parts with Arsenal right now.

Perhaps one of the most important parts is Lacazette. The Frenchman's all-round play was highly influential at the end of last season. Defensively he put in incredible shifts, such as his man-marking job on Fabinho in Arsenal's victory over Liverpool in July, which is depicted below. In addition, his ability to drop in and link play was integral to his side's offensive game. 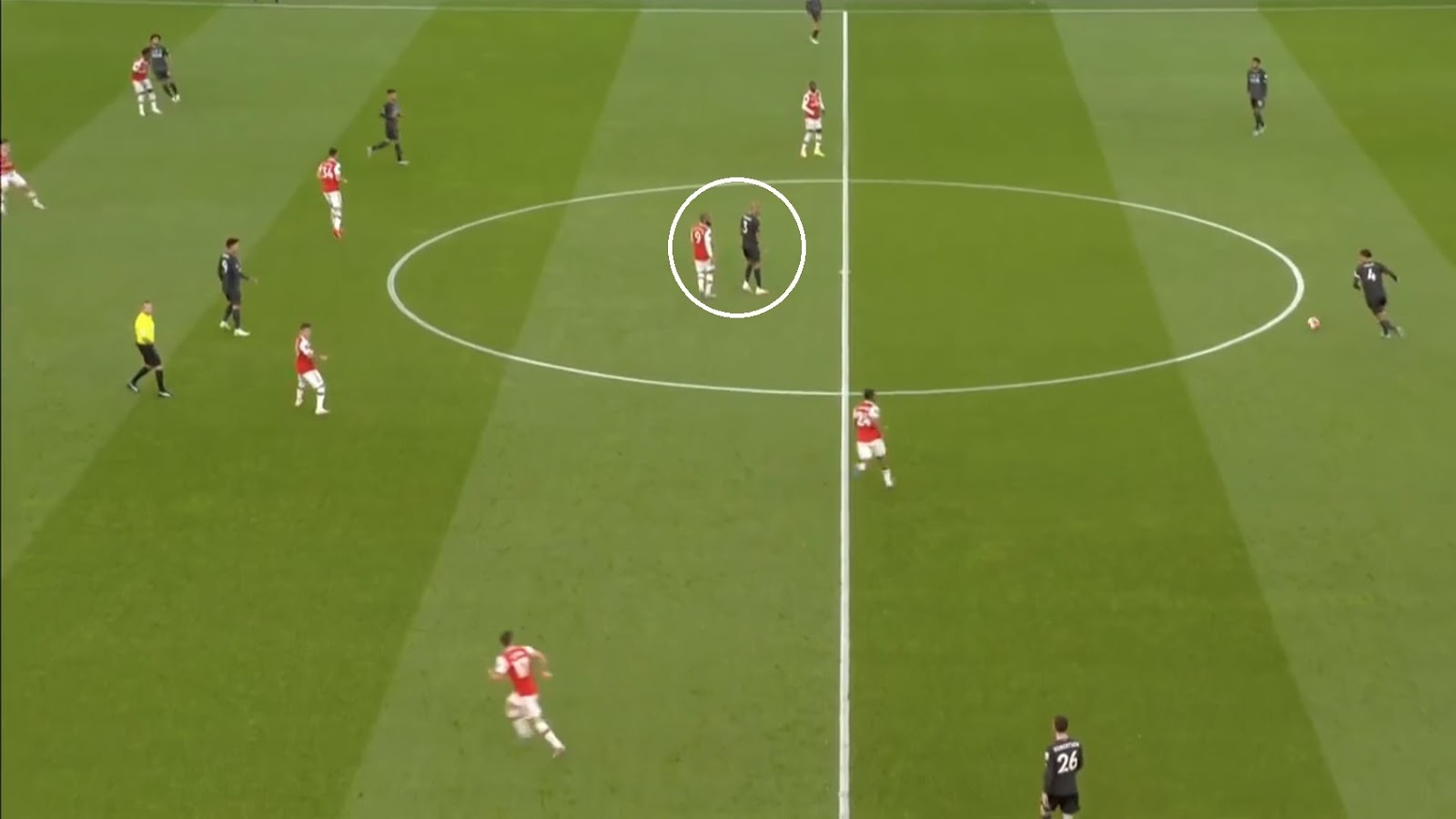 Arsenal's build-up may look slightly different if Lacazette doesn't start this weekend. Without a striker who can go short, control the ball under pressure with back to goal and lay off, they may have to play more down the wider areas, exploiting the movement of the inside forwards (Aubameyang plus one of Pepe, Willian, or Saka) as well as the overlapping runs of the wing-backs.

Regardless of the profile of their frontline, Arsenal may struggle to establish possession against Liverpool. Klopp sets his side up to defend with a narrow front three with plenty of mobility, which allows for quick pressing when the opposition pass sideways along the back line. Below we see an example of this setup from the two teams' last meeting. 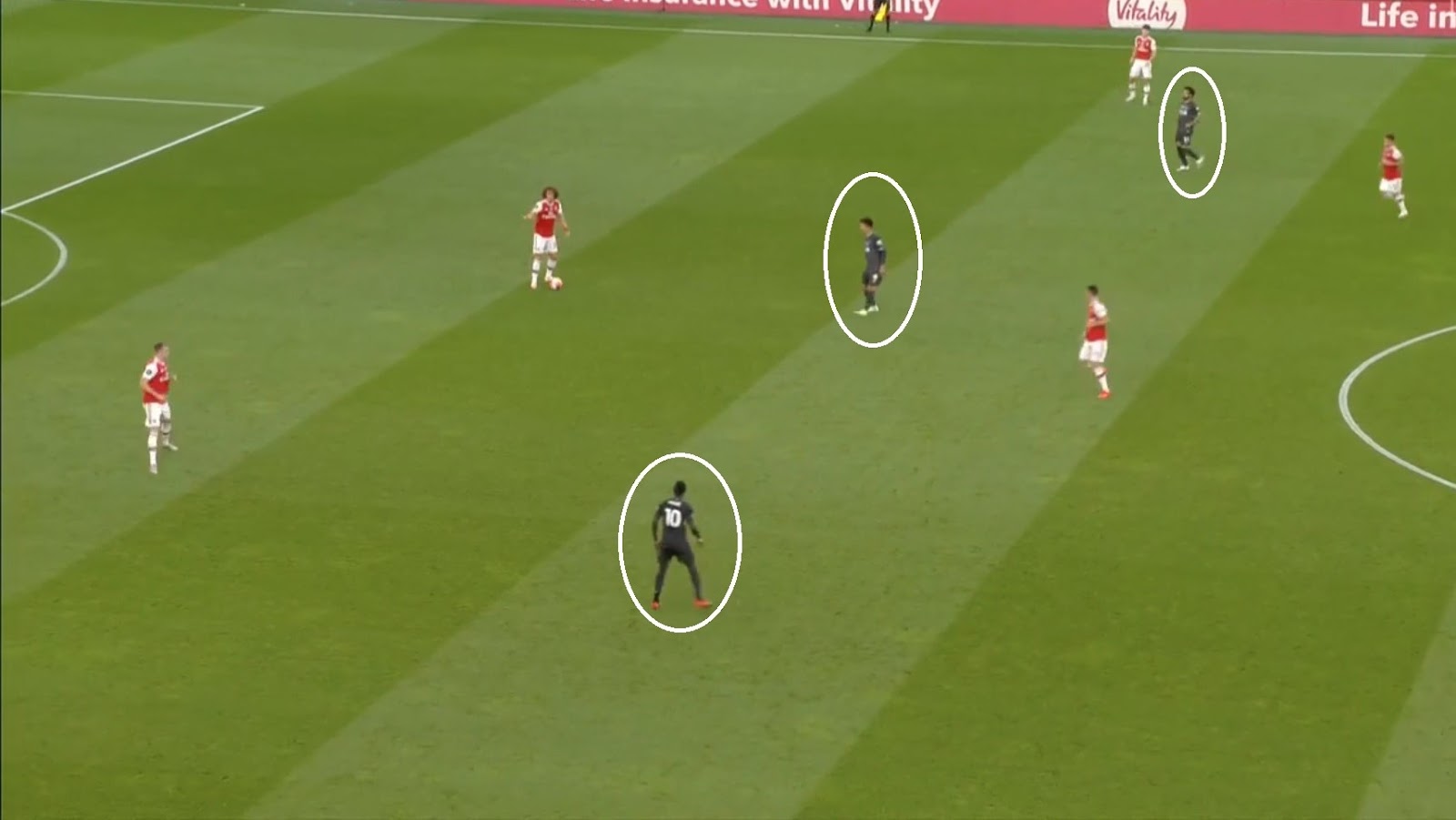 Against such an organised and intense pressing outfit, Arsenal may concede possession and focus more on their own defensive shape. Maintaining their usual 5-4-1 with a fairly narrow front three, matching up in midfield and aggressive 1v1 defending from the centre-backs, they may look to force turnovers in midfield before counter-attacking via Aubameyang's speed and clever runs behind.