On 28 April 2010, Jose Mourinho confirmed his status as the 'anti-Pep'. Having already won titles with Chelsea and Porto, he led Inter Milan past Pep Guardiola's Barcelona to reach the 2010 Champions League final. The semi-final victory was, in itself, a great win. But it also created a jarring juxtaposition of football styles that came to define a generation.

Guardiola's Barcelona had won the treble of La Liga, Spanish Cup, and Champions League the previous season and were a stunning force on the pitch thanks to their intricate passing, relentless pressing and their possession of a prime Lionel Messi. And yet Mourinho's Inter were able to stop them from all-out domination.

After a 3-1 win in the home leg, Mourinho's men lost 1-0 at the Camp Nou to seal their progression. Here's how it happened.

Pep Guardiola's Barcelona lined up in their preferred 4-3-3 system on the night. Messi played on the right of the front three, though he had license to wander all over the pitch. Zlatan Ibrahimovic led the frontline, with Pedro to his left. Xavi, Sergio Busquets and Seydou Keita filled the three midfield spots, while the back four was made up of Dani Alves, Yaya Toure, Gerard Pique, and Gabriel Milito, with Victor Valdes sweeping up behind them.

Mourinho set his Inter side up in a 4-4-1-1 formation, with Wesley Sneijder just off of lone striker Diego Milito (brother of Barca's Gabriel). Samuel Eto'o patrolled the right wing, with Christian Chivu on the left. Esteban Cambiasso and Thiago Motta teamed up in midfield, protecting a back four of Maicon, Lucio, Walter Samuel, and Javier Zanetti. Julio Cesar was, as always, their chosen shot-stopper.

Inter were happy not to have the ball, defending in as compact a shape as they could keep. As seen below, their back four was higher than the edge of their own box, but nowhere near the halfway line – this allowed them to step up, support pressing and play offside, or to drop back and cover the space behind as necessary. What usually happened was they put a bit of pressure on Barcelona's build-up through midfield without really trying to press high, before settling back into a low block. 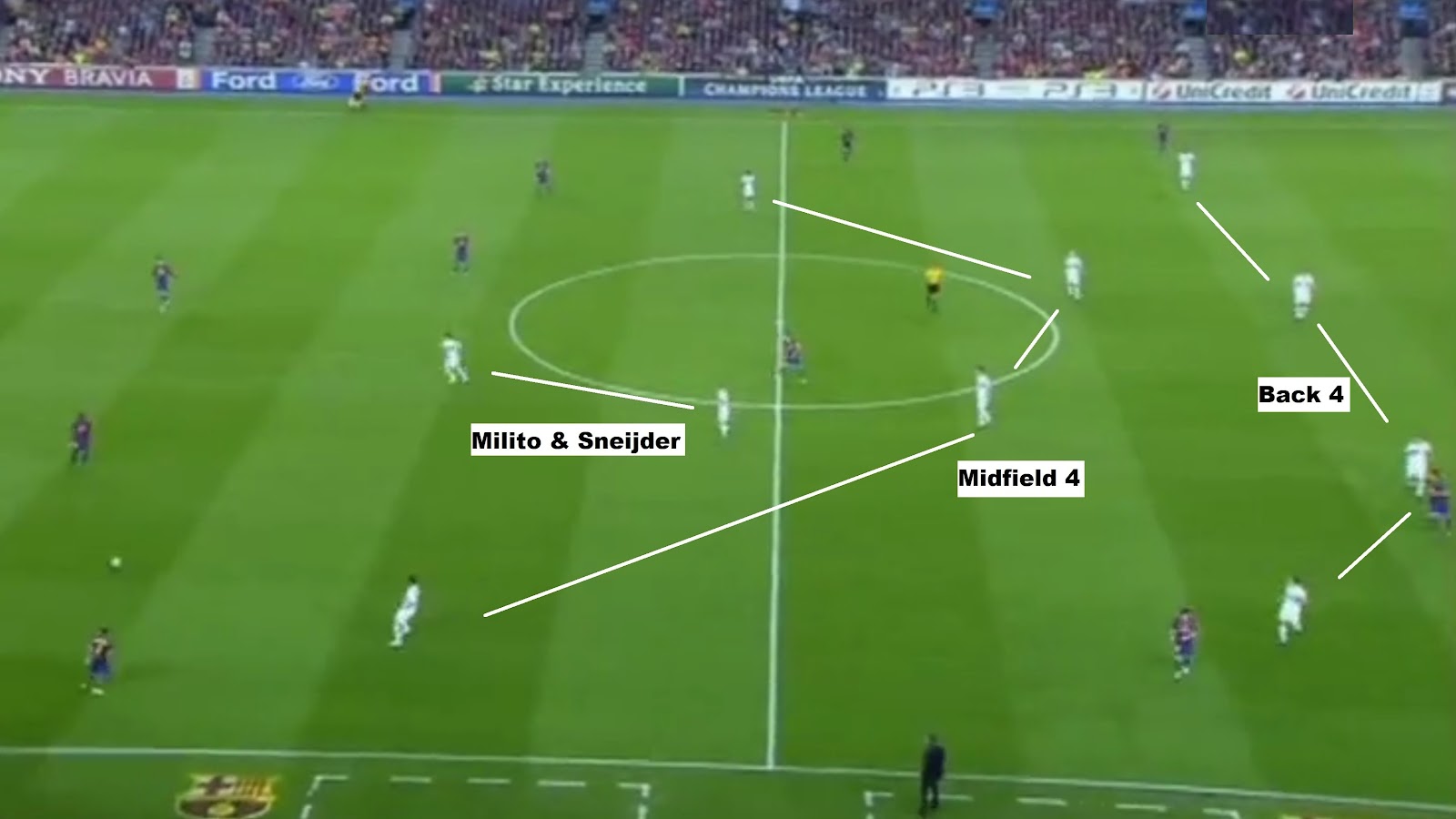 Barcelona enjoyed a lot of comfortable possession, but found it hard to play through Inter's defensive lines. And when Inter won the ball back they weren't interested in holding on to it for concerted periods of time. They played directly and at a fast tempo, looking to counter-attack through Eto'o's pace or by using Milito as an aerial target to play off.

Inter also went long from back to front on goal kicks, refusing to build out from the back and minimising the risk of being counter-attacked. These long kicks meant they could keep their shape and maintain a good number of players behind the ball, and it also meant they gave the ball away in the opposition half. Consequently, Barcelona always had to bring the ball back up the pitch and there weren't a lot of transition moments for them to release Messi or Pedro.

REACTIONS TO THE RED

On 28 minutes, Busquets went down clutching his face after a challenge from Motta. While not hurt – television replays showed Busquets peeking through his fingers to see what was unfolding – it was enough for Motta to see a straight red. The decision was harsh, but it was also final. The game state had changed completely.

Inter, with a two-goal advantage, became even more defensive, shifting to a 4-4-1 that saw Sneijder as the '1'. Milito went to the right side of midfield, while Eto'o moved over to the left. Despite the man disadvantage and the forced tactical changes, their defensive principles stayed the same.

They continued to try and congest the playing space available to Messi and to force Barcelona wide and into early crosses from Alves and Pedro on either side. Ibrahimovic was kept quiet, and the crosses mostly caused no problems.

As the game went on, Barcelona became more and more attack-minded in their shape and personnel. With the game still at 0-0 in the second half, they added Jeffren for Busquets and essentially went with a front four. Toure was also given license to leave the back line and take up more advanced positions, leaving Pique as their only out-and-out defender left on the pitch. Funnily enough, Barca's only remaining proper centre-back was the man to get them back in the game late on.

The hour or so of play following Motta's red card was a masterclass in defending from the Italian champions. They stayed extremely organised in their defensive lines – when one player left their line to press the ball the others in the line all moved to cover behind him. An example of this organisation is seen below. 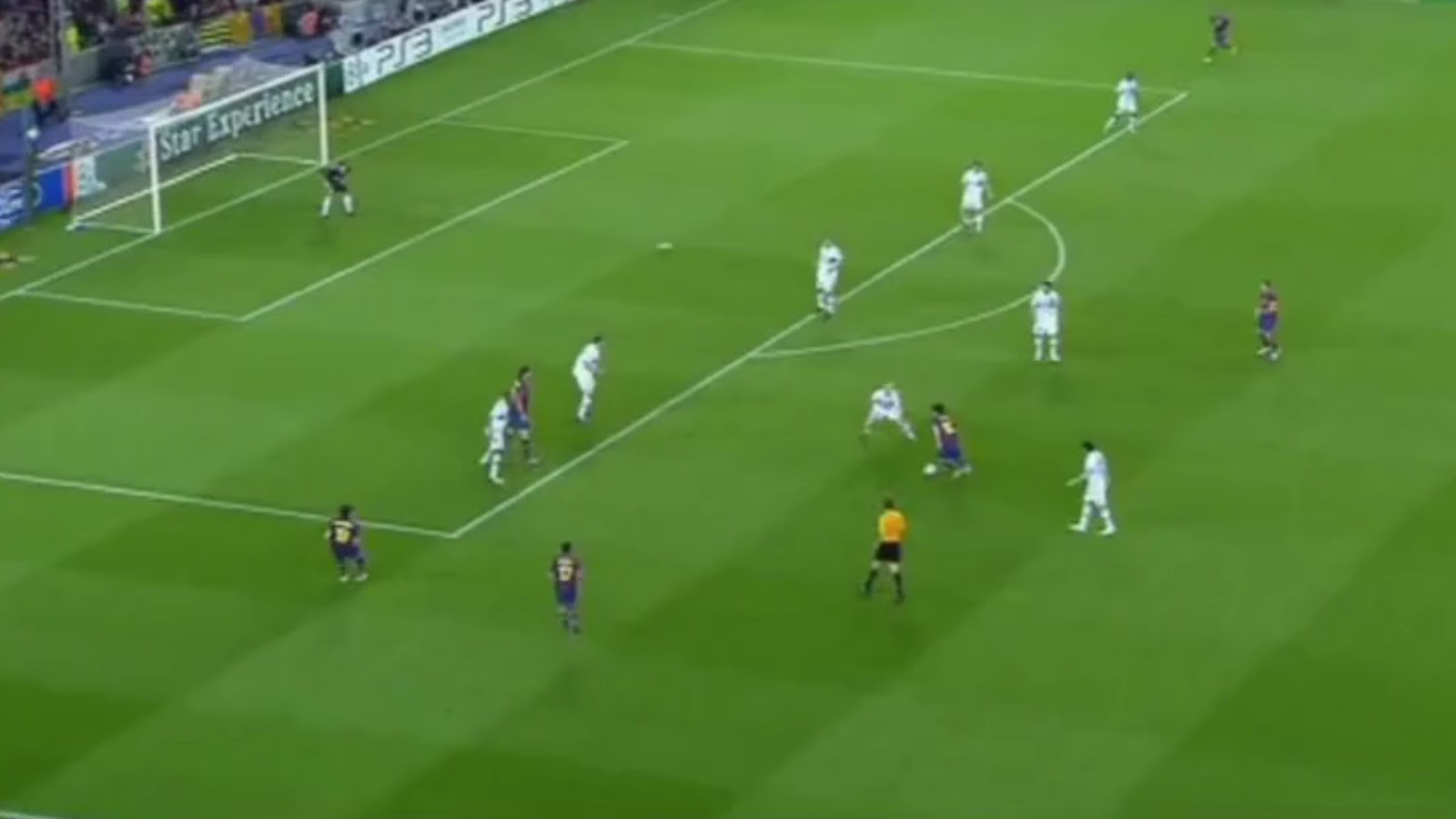 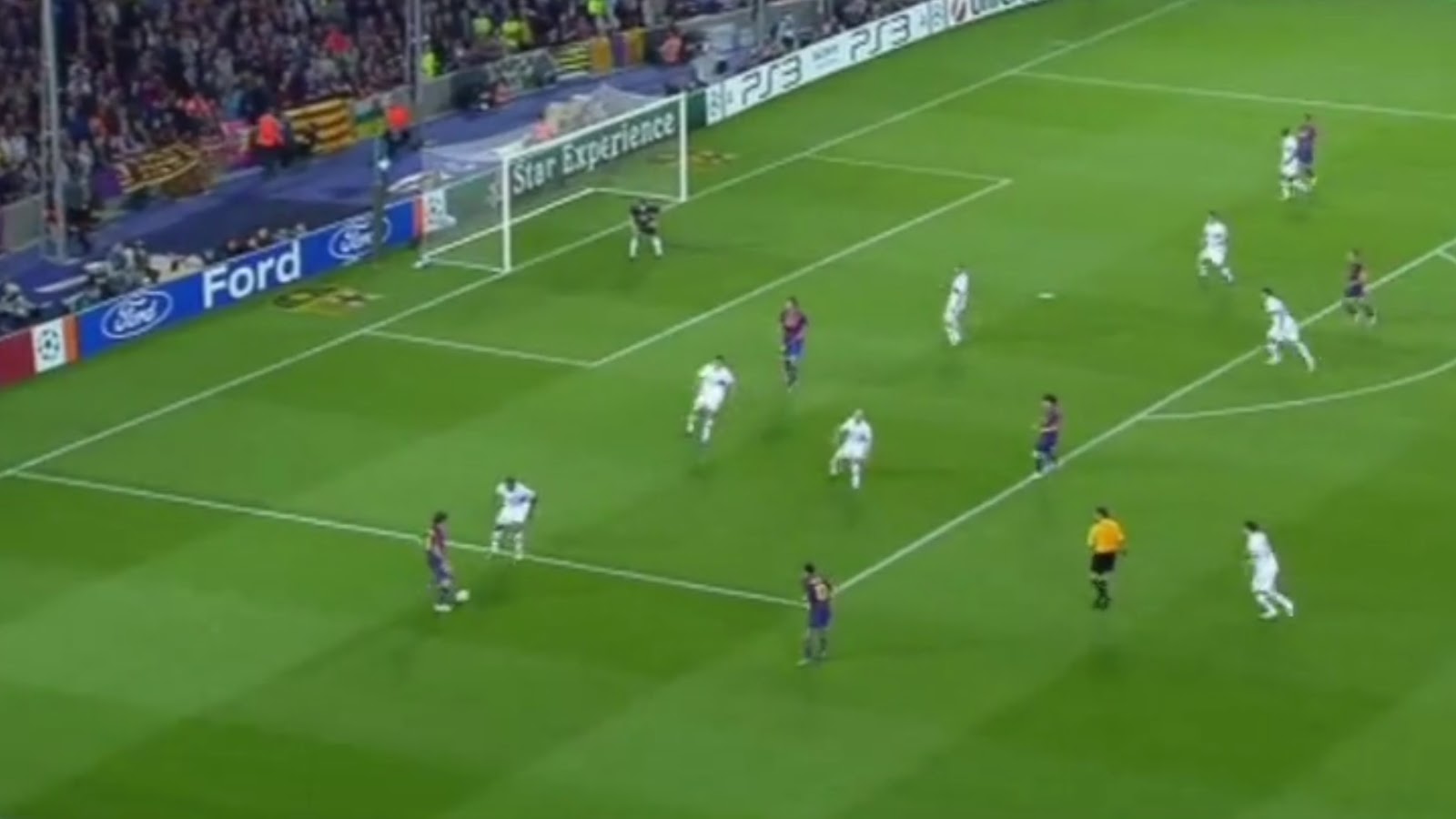 Inter's defensive line also looked to step up and play offside when possible, particularly on switches to the far post area, and made increasing use of drawing fouls as the game wore on.

Exploiting any sort of contact, they would make the most of it in an attempt to win free kicks, waste time, and generally slow the game down. They did this multiple times on crosses into the box, using aerial duels as an excuse to go down and break up the Barcelona attack.

The world was just beginning to see the best of Lionel Messi at this time. This season he would go on to score 47 goals in 53 games in all competitions – it wasn't the 73-goal haul he'd register two seasons later, but it was still pretty damn all-time-great.

Inter's defensive strategy was focused on stopping the Argentine. Mourinho admitted as much in an interview with The Coaches Voice discussing the first leg of this tie years later, saying "[It] was with [Messi] that we started analysing and trying to predict the game, and trying to anticipate the problems."

Video Courtesy of The Coaches' Voice

Mourinho described his side's approach to Messi as trying to create a jail, or cage, around him. It's an apt description, because Messi only truly broke free once all night. Below is the instance in question, and an example of what Inter were trying to avoid – Messi moves between the lines, gets the ball on his left foot, and works a shot just past the post. 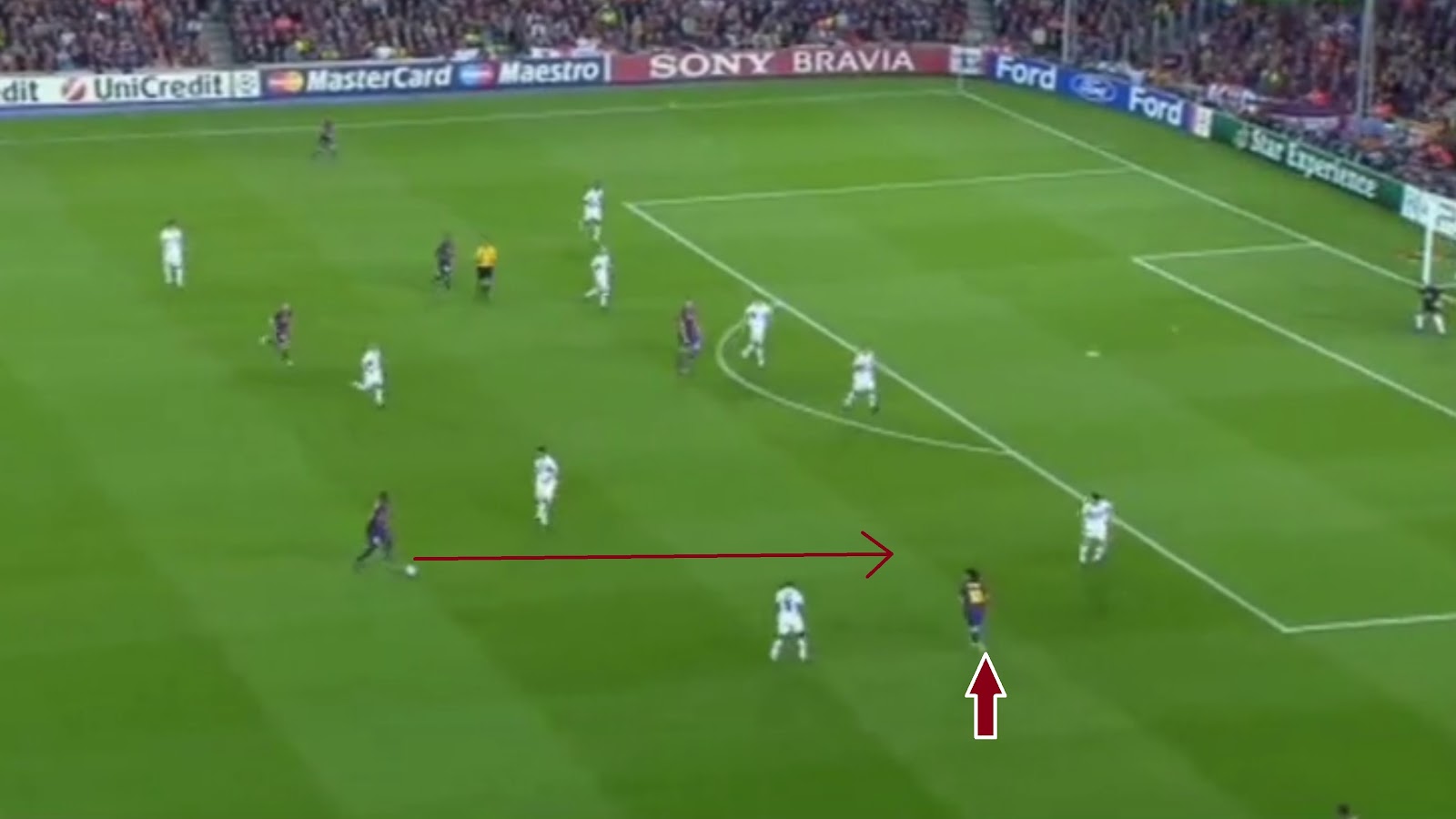 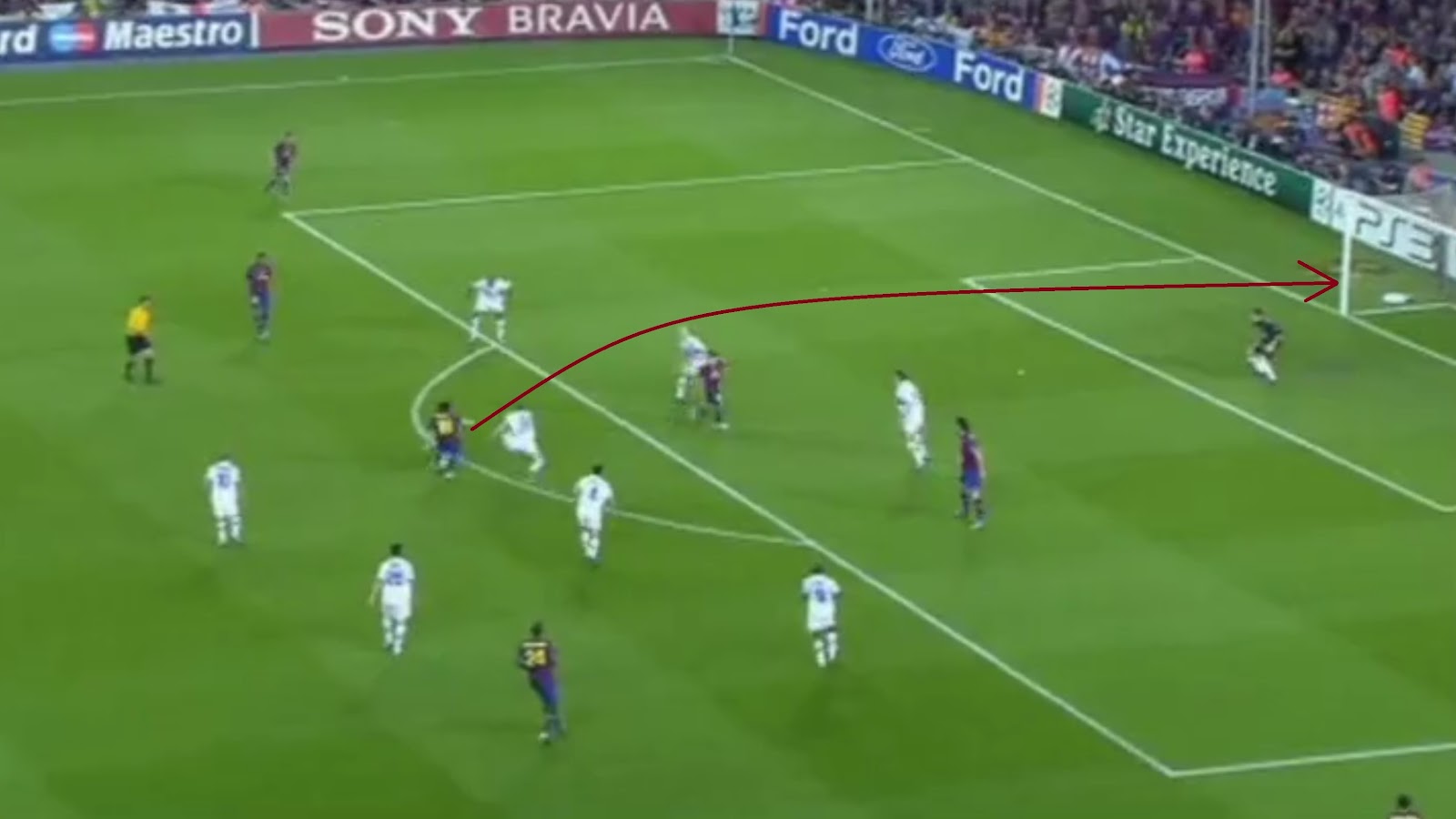 Inter didn't want Messi driving at their last line on his left foot like this consistently, because there was no positive ending to that particular story. To prevent this they used a number of different methods, such as…

Here we see Motta (while still on the pitch) checking his shoulder to see where Messi is and ensuring he stands between the ball-player and Messi, blocking the pass. Motta covers Messi in his 'shadow', hence the term 'cover-shadowing'. 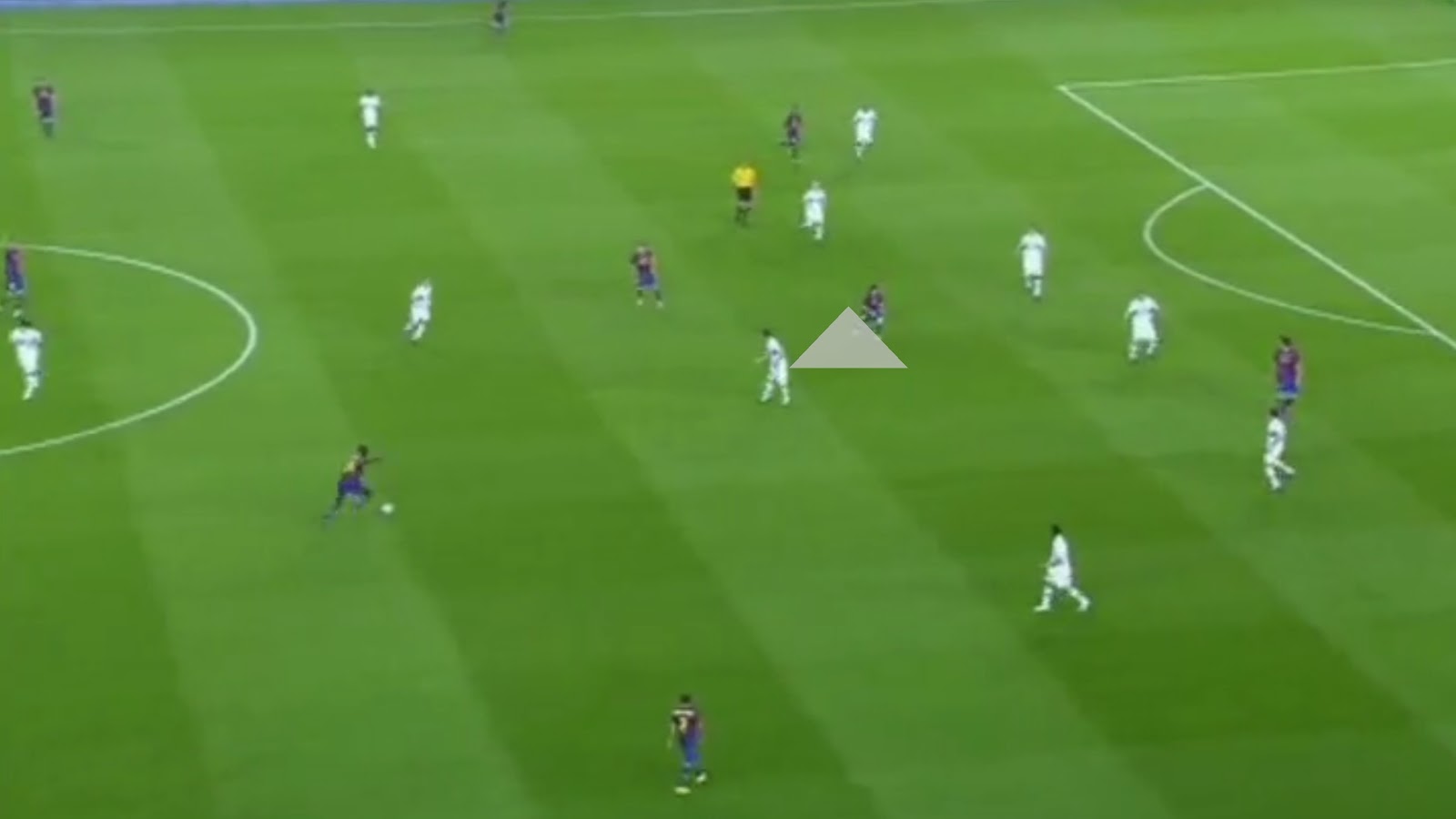 Inter didn't man-mark Messi, or anyone for that matter. Doing so against the fluid movement of Barcelona's attack would have been defensive suicide. But they did press man-to-man when the ball entered their 'zone'. So when Messi got the ball, he would be closed down by the nearest Inter defender.

Below we see Zanetti closing Messi. But, when Messi eventually dribbles away from him, Zanetti passes him on to Chivu. 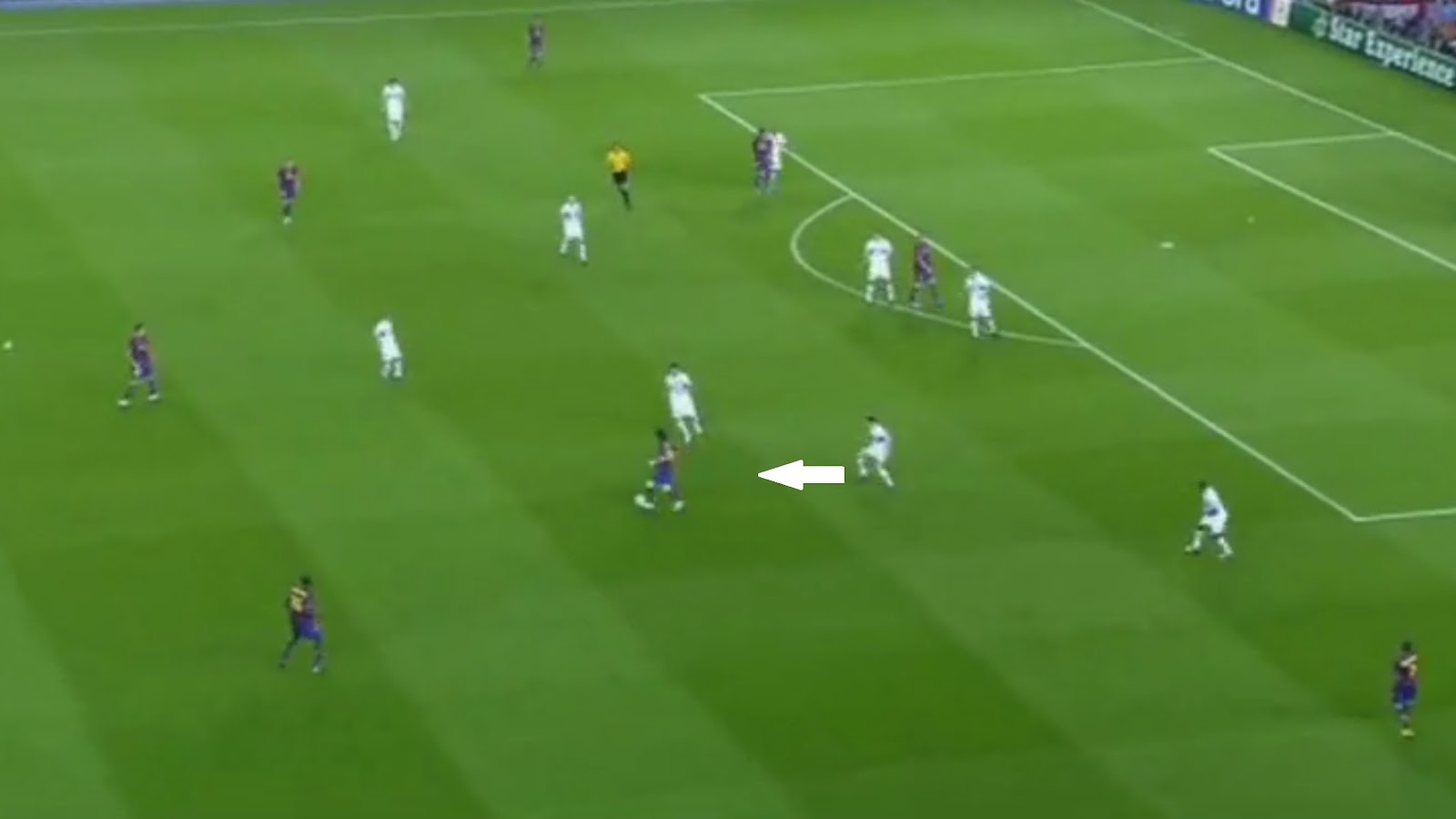 Inter did a good job throughout of keeping two defensive lines between Messi and their goal. As a result, Barcelona couldn't get their best player on the ball in behind or between the lines. The only options for Messi were to come deep and receive in non-threatening areas, or to drive. But, when he did drive, Inter used the compactness between their lines to quickly get defenders around him, collapsing in on Messi from all angles.

Below is an example – Messi dribbles at the Inter midfield and defence lines, and three Inter players collapse in on him. Messi is tackled, the attack comes to an end. 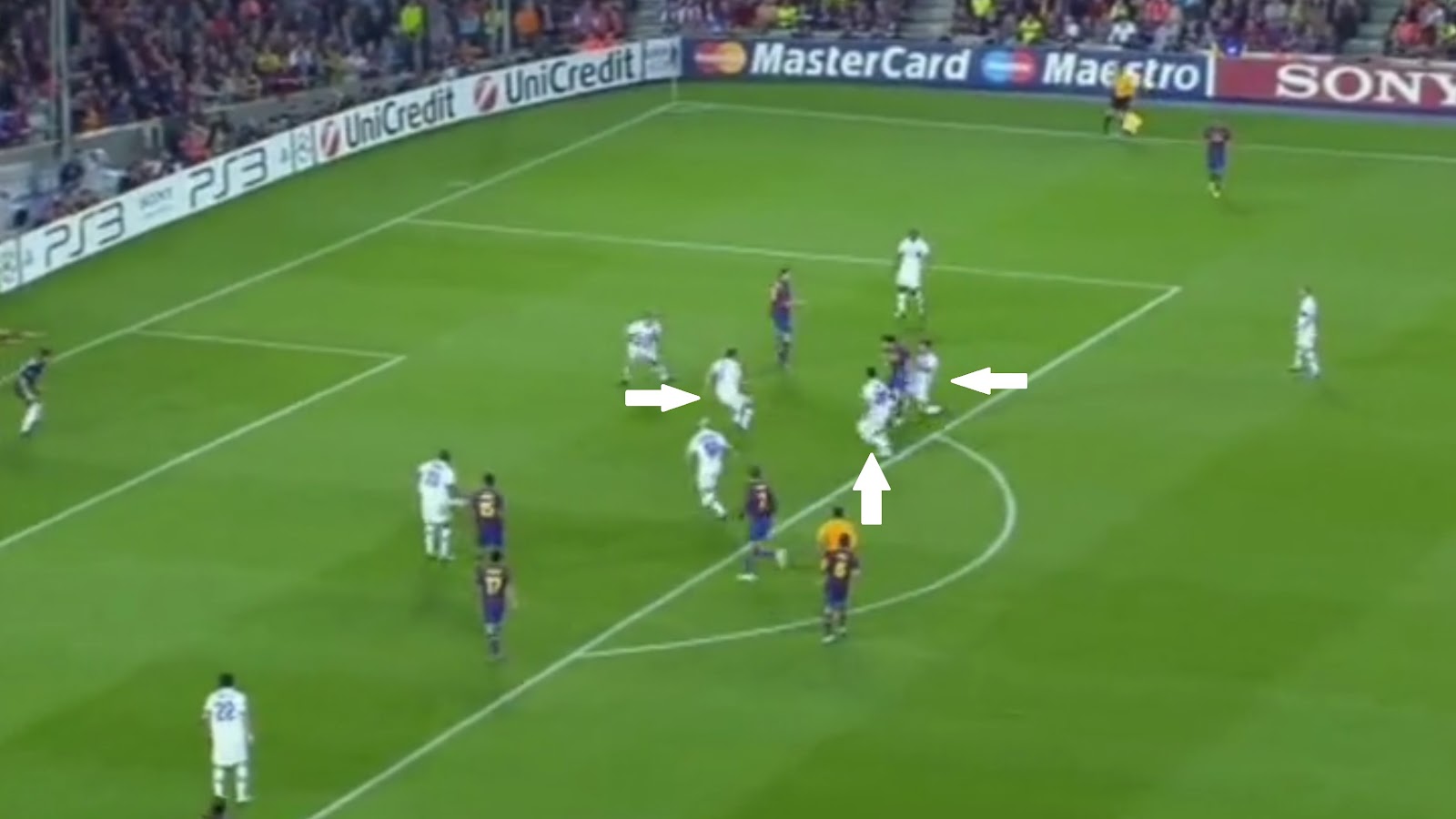 Unable to bring the best out of Messi, Barcelona were frustrated. Pique pulled one goal back with six minutes of normal time to go, but it wasn't enough. Inter had just one shot, which wasn't even on target, and won. They took out the reigning European champions on their own turf with a ruthlessly organised defensive display.

Mourinho had another special victory, and a new rivalry was born.