Liverpool were in pole position going into the final three games of the 2013/14 Premier League season. They were five points ahead of Chelsea and six ahead of Manchester City, albeit the latter had a game in hand. All in all, the situation was extremely positive for Brendan Rodgers' side as they welcomed Chelsea to Anfield in late April.

The league positions weren't the only thing in Liverpool's favour before the game. Chelsea boss Jose Mourinho had reportedly been ill all week, and he also had to prepare his depleted team for a Champions League semi-final second leg against Atletico Madrid days after their trip to Liverpool. He had said he would be happy to finish second, and it was a believable thought process all things considered.

What followed was one of the most iconic matches in recent Premier League history, as Chelsea scuppered Liverpool's title bid in front of their own fans.

CHELSEA SET UP TO FRUSTRATE

Liverpool were without Daniel Sturridge due to a lack of match fitness, but the Englishman started on the bench as an option to be introduced later on if necessary. In his absence, Luis Suarez, Raheem Sterling and Philippe Coutinho took up the front three positions in Rodgers' 4-3-3 system for this game.

Steven Gerrard anchored the midfield, with Lucas and Joe Allen acting as box-to-box midfielders on either side of him. In defence, Martin Skrtel and Mamadou Sakho were flanked by Glen Johnson and Jon Flanagan, while Simon Mignolet was in goals.

Chelsea were without goalkeeper Petr Cech through injury, so Mark Schwarzer started instead. Mourinho also chose to rest key players ahead of the Champions League clash with Atletico, with John Terry, Ramires and Eden Hazard among those left out at Anfield.

Mourinho lined his side up in a 4-4-1-1 system, with Frank Lampard supporting lone striker Demba Ba. Andre Schurrle and Mohamed Salah were on the wings, with John Obi Mikel and Nemanja Matic providing physical presence in central midfield. The back four was, from right to left – Cesar Azpilicueta, Branislav Ivanovic, Tomas Kalas, and Ashley Cole.

It was clear early on that Chelsea were set up to frustrate Liverpool, who Rodgers had developed into a possession-focused team. At the first break in play, Chelsea time-wasted over a free kick deep in their own half. The Anfield crowd roared in anger. The frustration had set in. 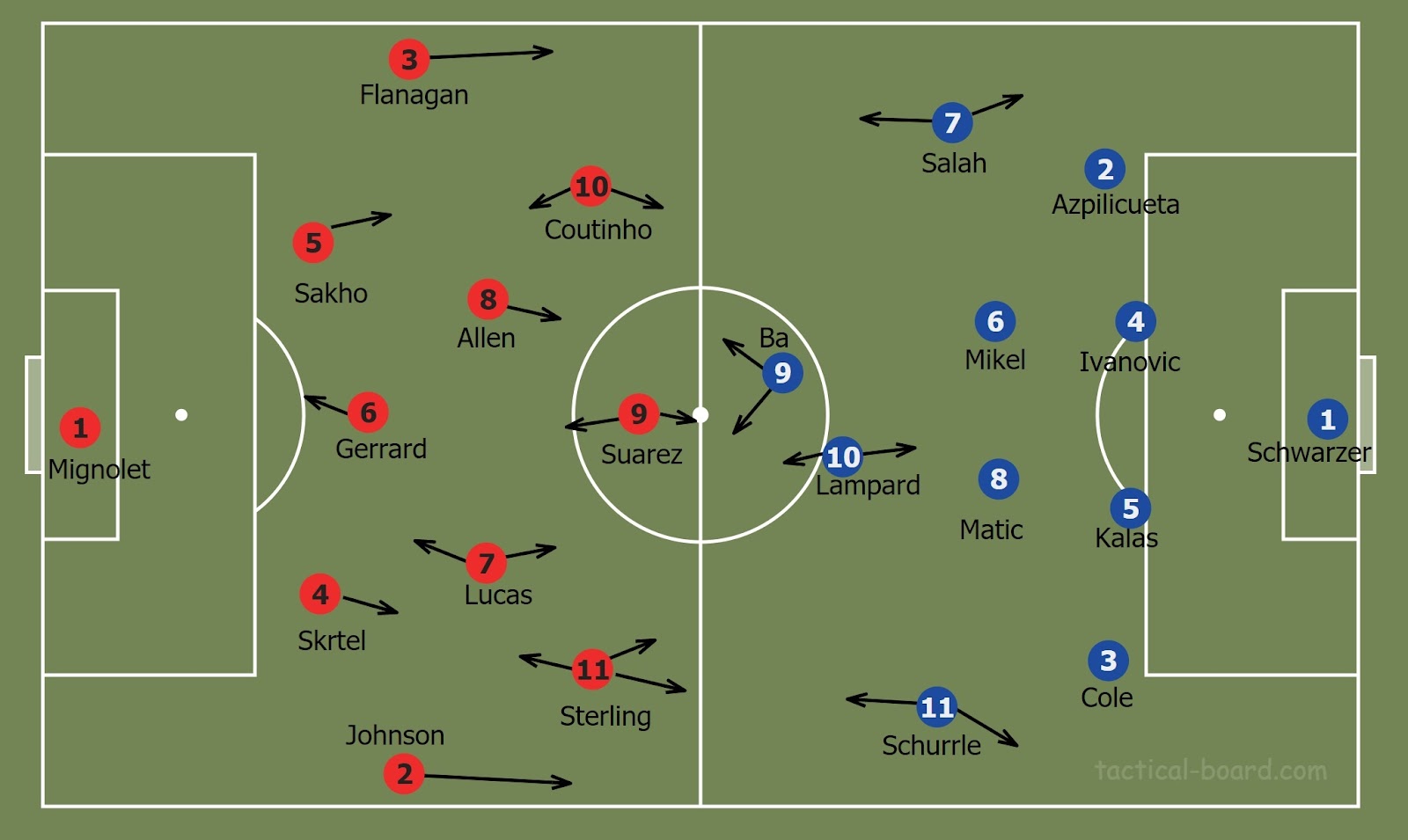 At this point, Liverpool were without a Premier League title in 24 years. It's fair to say their fans were excited to see their team finally end the long wait, and their excitement must have tripled when Chelsea's line-up was announced. There was a great deal of expectation inside Anfield on the day, but that expectation soon turned to anxiety.

Chelsea looked disinterested. Mourinho clearly hadn't shaved in days and was (supposedly) unwell. His team were five points behind their hosts and, without their star players, looked there for the taking. But it's hard, with the benefit of hindsight, not to see this as a psychological trick on Mourinho's part. It's hard not to consider that he used the whole situation to heap more pressure on a Liverpool side that was already feeling it from their own fans. And his tactics only added to the pressure.

Gerrard was no longer at his physical peak, and had taken to dropping between the centre-backs to get on the ball and dictate Liverpool's build-up. By dropping, he created a numerical advantage of 3v2 on Lampard and Ba. This ensured comfortable possession against a Chelsea side that didn't look too bothered about pressing anyway. 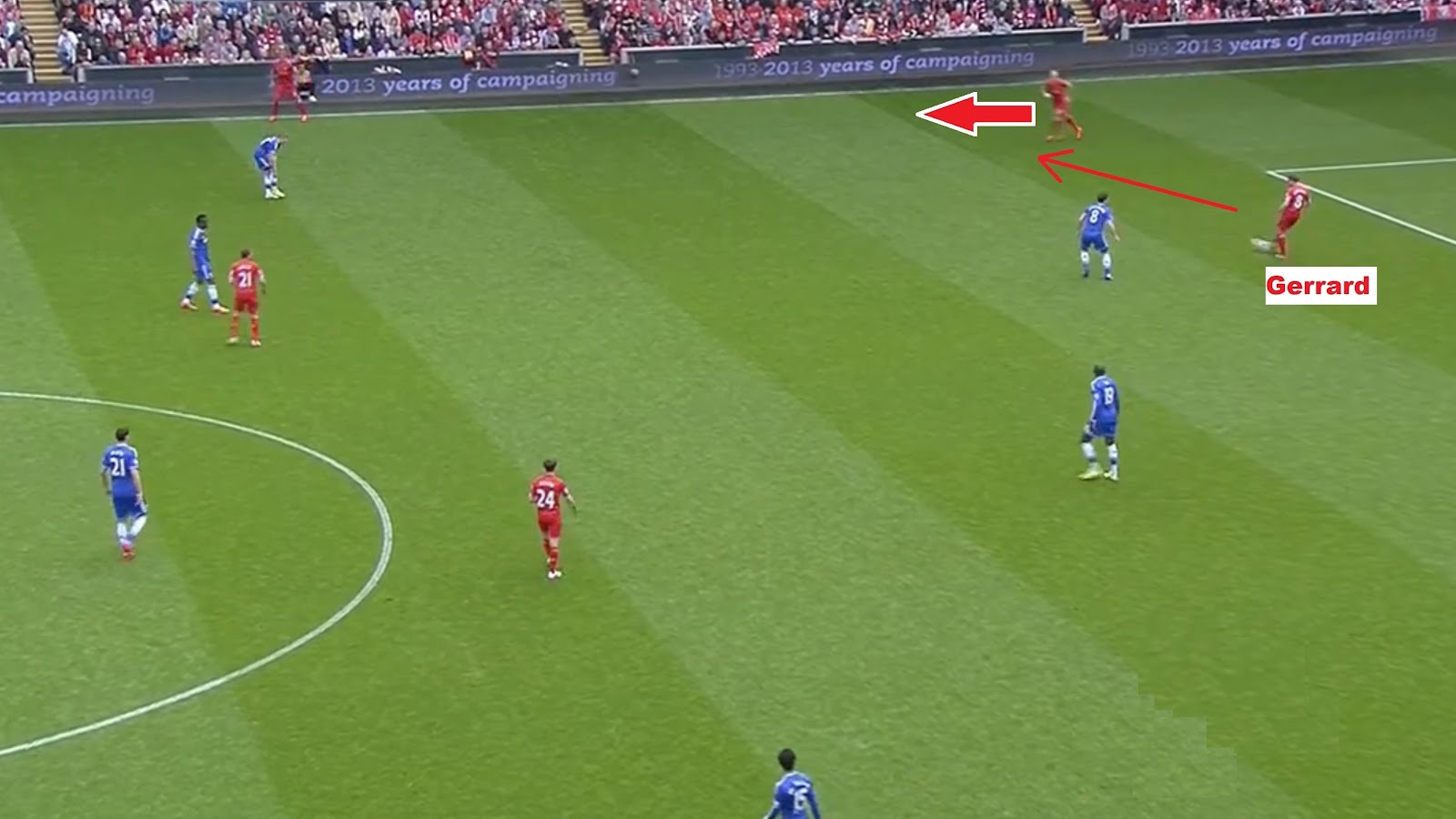 Chelsea responded by sitting back in a low 4-4-1-1 block, with Ba left up front on his own to spearhead counter-attacks. He and Lampard would block the centre, backed up by two compact banks of four behind them, and force Liverpool to progress through centre-backs Skrtel and Sakho, who – as seen above – split wide when Gerrard dropped between them.

But Chelsea didn't even press Skrtel and Sakho when they dribbled forward. Rather, they sat off and allowed two fairly non-threatening players to have the ball. For some players, time and space is a wonderful thing. For Skrtel and Sakho, it was wasted. They didn't have the qualities to thread precise passes through to the front players, nor the confidence or skill to drive forward and commit Chelsea defenders out of their shape.

With the centre of the pitch congested, Liverpool were unable to find Sterling, Coutinho and Suarez between the lines. Instead they had to go around the Chelsea block, often using Gerrard diagonals to switch play. These switches, however, rarely worked out, with Chelsea wingers Salah and Schurrle always conscious of their defensive responsibility to track Liverpool's full-backs when they overlapped. 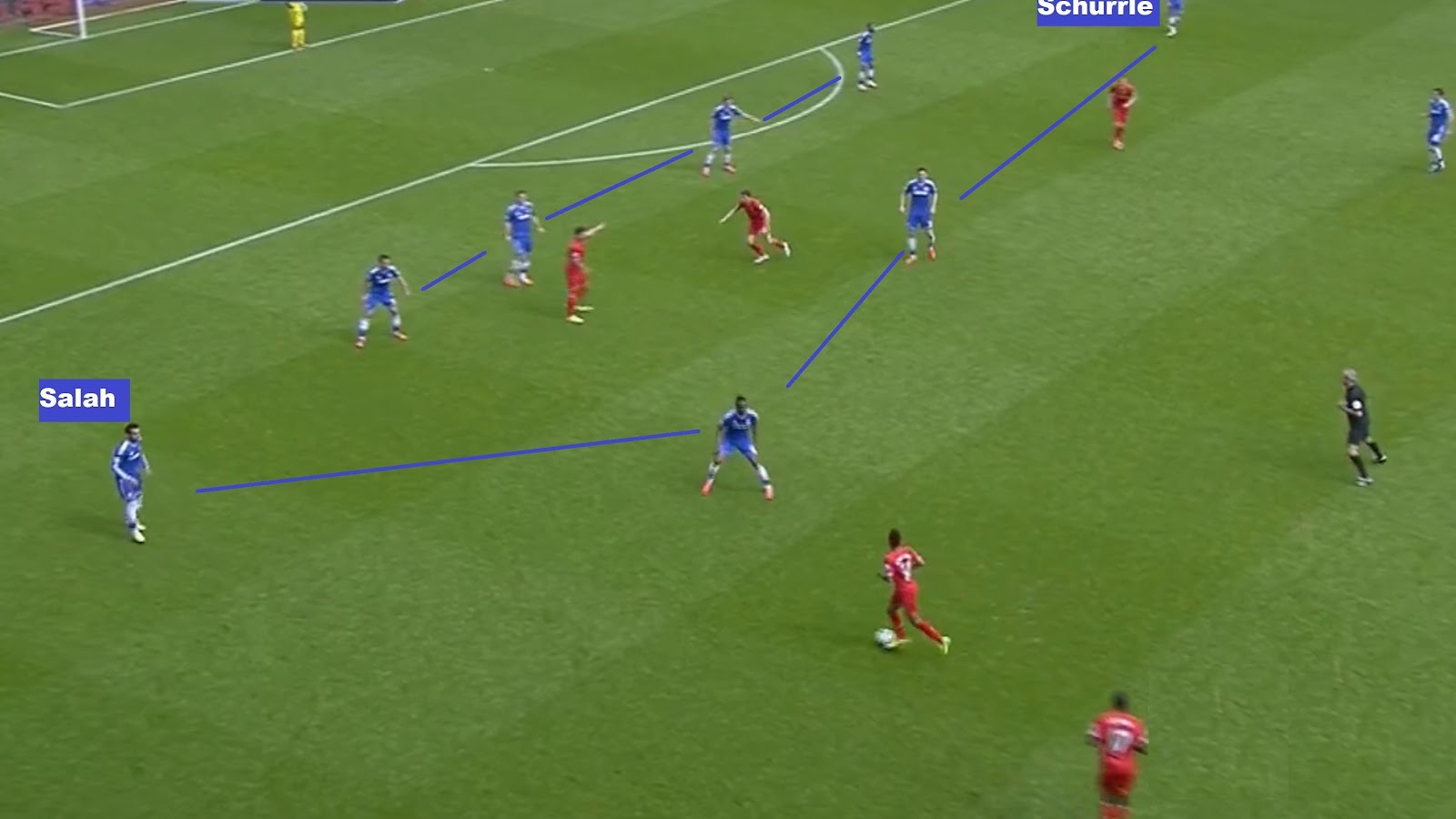 Even when Liverpool did progress wide, they struggled to come inside and muster anything beyond a speculative long-range shot. These shots had to go through two banks of Chelsea defence and their goalkeeper Schwarzer to have any success, and they were generally blocked, wide of the target, or comfortably saved.

Failing to play through Chelsea, it became evident that Liverpool lacked a Plan B. Their only alternatives were shots from distance or hopeful crosses that went to nobody or were headed away. This Liverpool side didn't have the late runs of Gini Wijnaldum or the deliveries of Trent Alexander-Arnold and Andy Robertson, and that cost them dearly against an organised Chelsea low block that was happy for the game to happen in front of them.

With every attack that petered out, the home fans grew more anxious. The route to victory that once looked straightforward and quick now looked complex and slow. The game was running away from Liverpool.

Mourinho's defensive strategy here wasn't built on pressing and forcing turnovers – it was instead built on keeping shape, blocking forward passes and waiting for mistakes. This eventually happened just before half-time, but there were warning signs before then.

On the rare occasions that Liverpool actually tried to play between the lines, they were often intercepted. And, once Chelsea won the ball, they didn't hang around to build from the back. Rather, they were direct and played forward quickly. 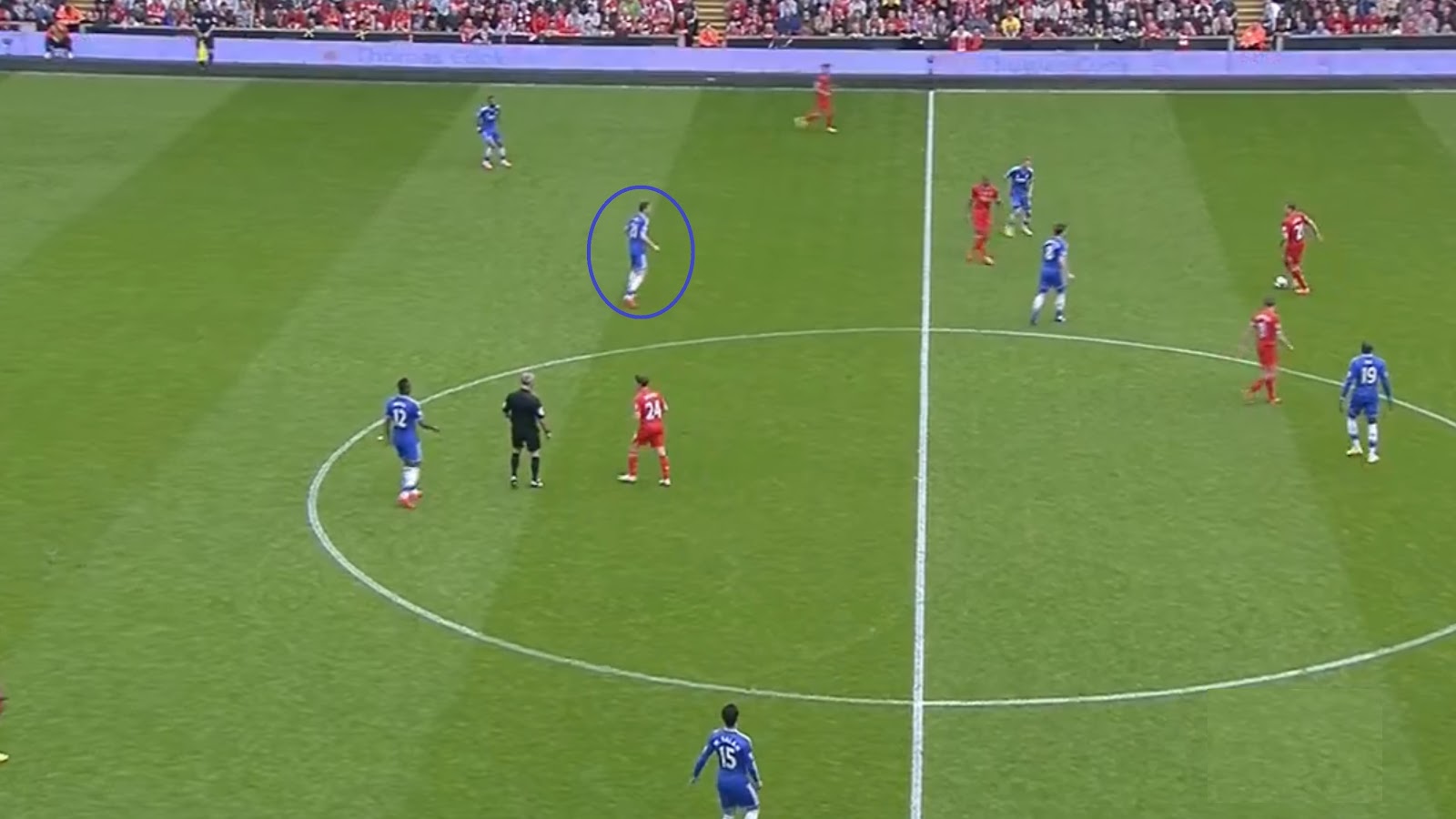 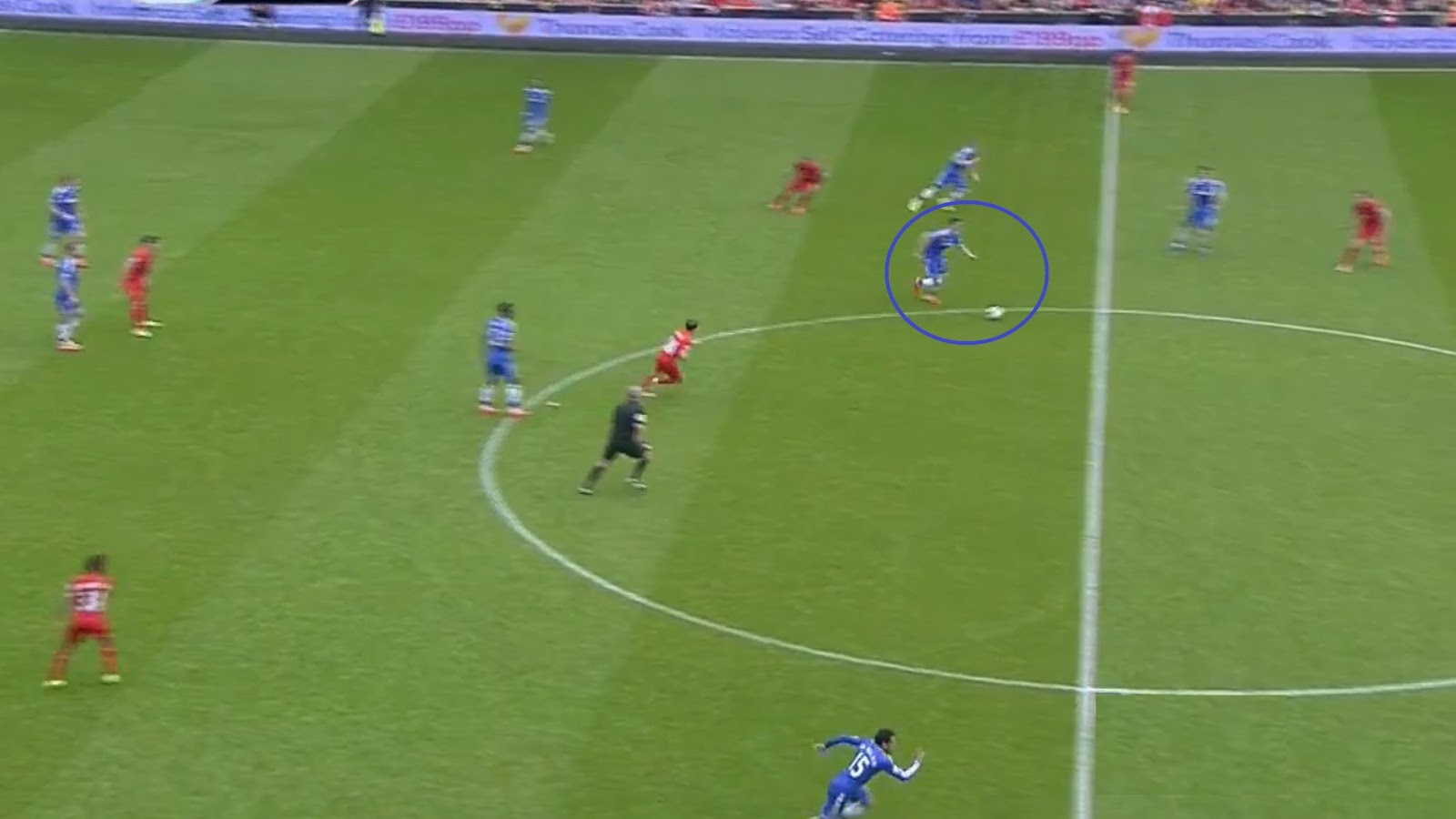 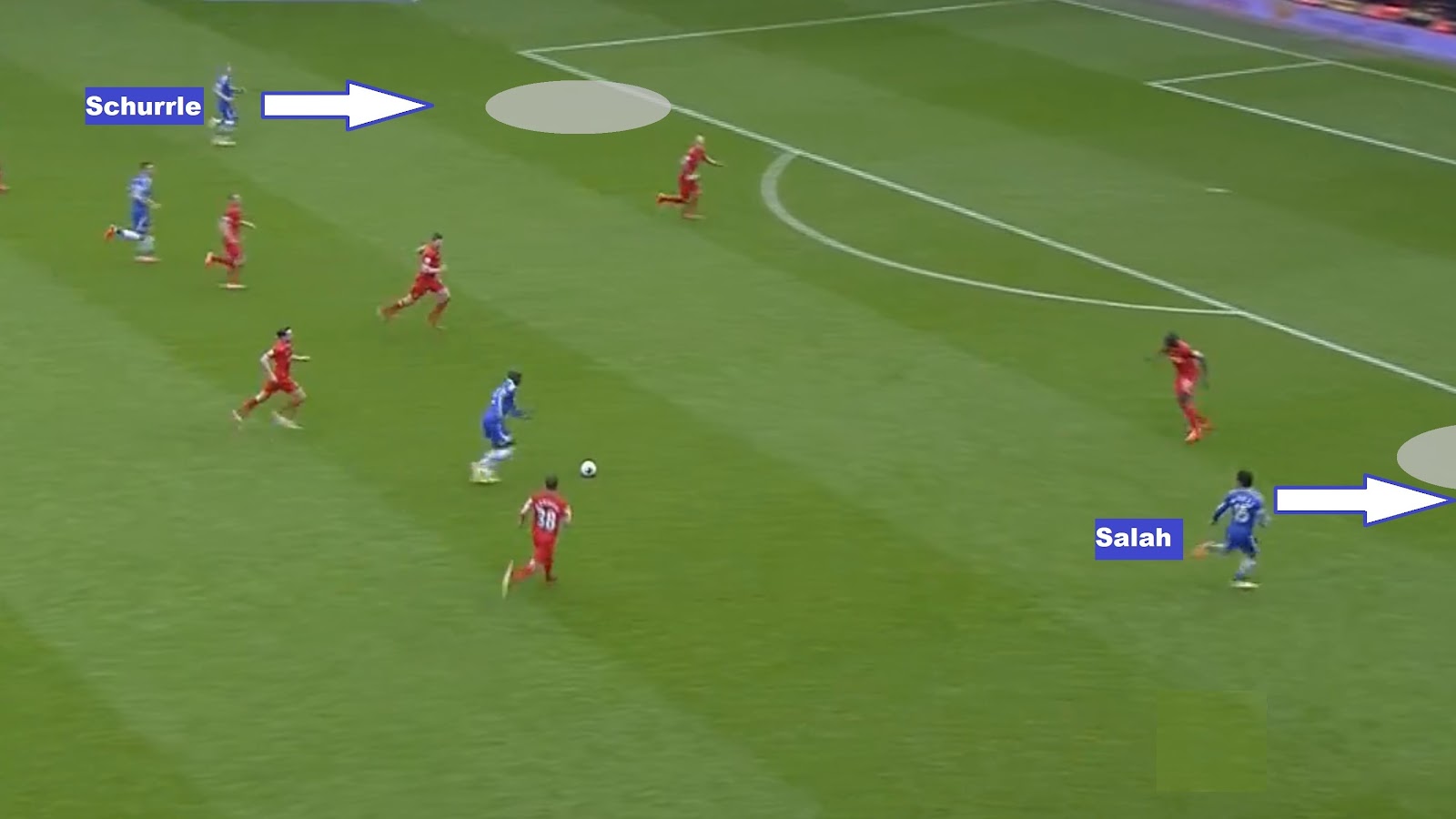 Salah and Schurrle attacked the spaces left behind by Liverpool's overlapping full-backs, while Ba offered an option over the top and held the ball in exceptionally well against Liverpool's centre-backs. Indeed there were times when Ba had no support near him and still managed to turn a long ball into an attacking opportunity with his sheer physicality and touch. Skrtel and Sakho just couldn't dominate him in the aerial duel.

Chelsea's passive defending sucked the life out of the game. It perhaps also lulled Liverpool into a false sense of security. In the third minute of first-half stoppage time, Gerrard dropped between the centre-backs to receive a simple pass from Sakho. Liverpool had comfortable possession – Ba wasn't even pressing on the sideways ball.

But, just as he and Lampard had done throughout the first half, Ba subtly adjusted his position to stay close to Gerrard. So when Gerrard failed to control the ball and then slipped, Ba was onto the ball in a flash. With Skrtel and Sakho split wide, Ba was through on goal, and he kept his head to finish the chance. 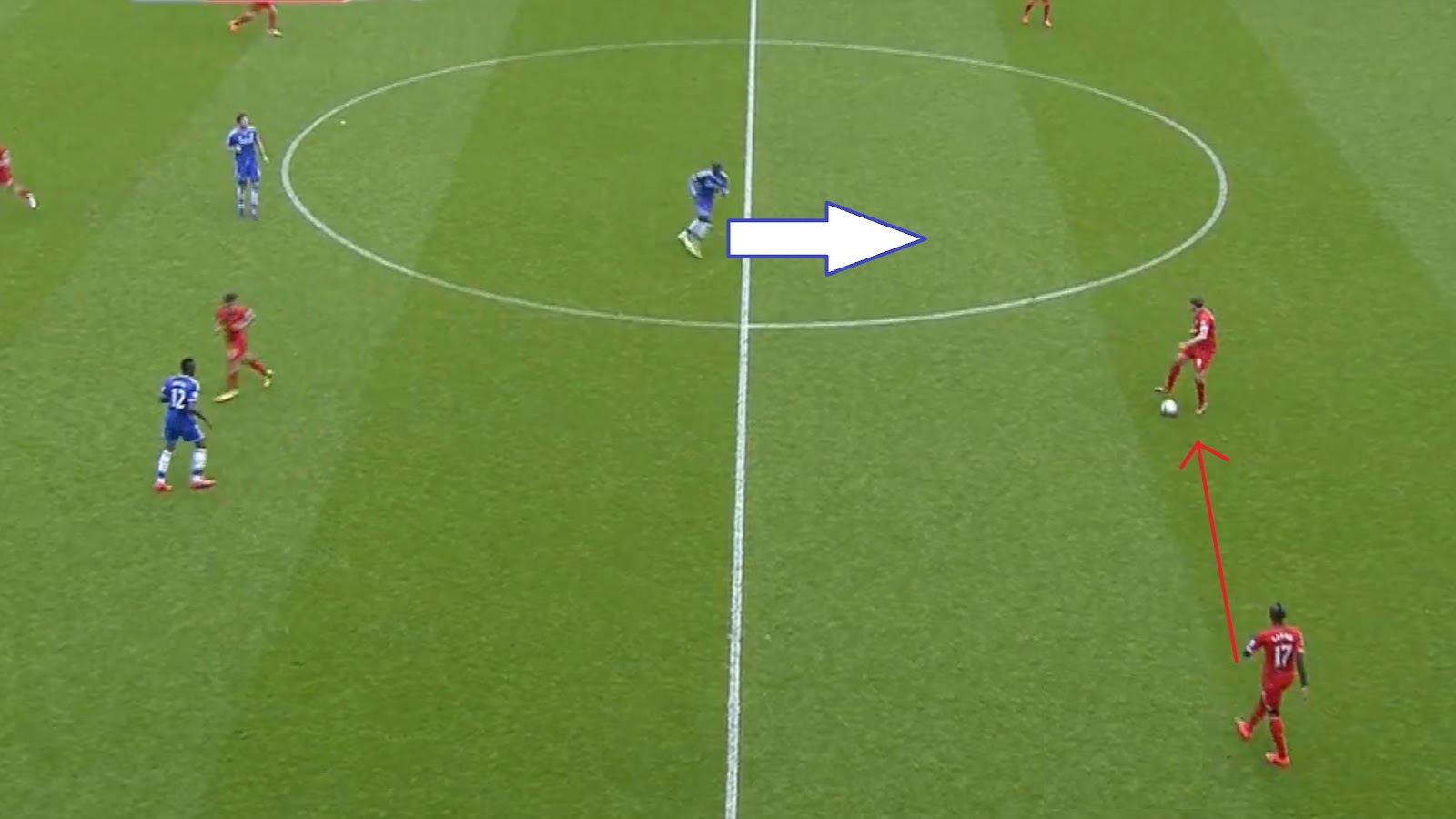 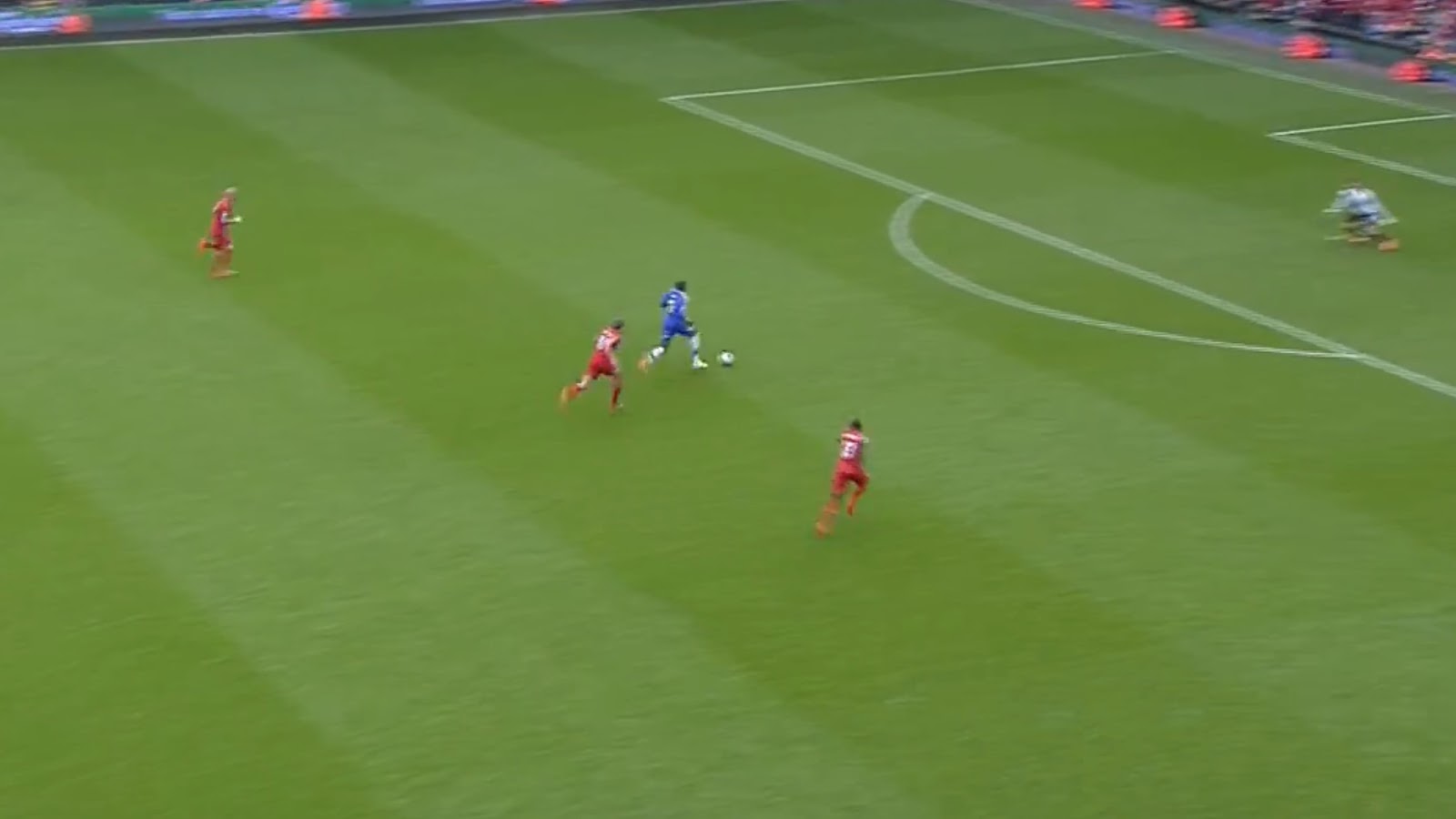 Liverpool would pay for mistakes in possession again as the game neared its conclusion. Sturridge, who came off the bench as Rodgers added attackers in search of an equaliser, played a loose pass that Willian intercepted. Fresh having come off the bench for Salah, Willian got to the ball before Gerrard – the only Liverpool player in position to defend – could react. Fernando Torres could then dribble at goal before setting Willian up for one of his simplest finishes.

After that second goal, Mourinho ran down the touchline. There were shades of his celebration when Porto knocked Manchester United out of the Champions League in 2004. But this time he didn't go all the way. The final whistle hadn't been blown, so his performance wasn't over. Chelsea weren't real contenders, he said. They didn't have their best players available. They only had 27% of possession. But the game was all over and they had won. The title race was wide open again.