Leicester City's 2020/21 campaign will be defined by two matches against Chelsea in the space of four days, first an FA Cup final on Saturday and then a league contest at Stamford Bridge from which Brendan Rodgers' side must win a point to remain in control of the top-four race. The thought of one club unravelling their entire campaign in back-to-back games is disconcerting. That this club is Chelsea – the best team in the country over the last two months – is a cause for serious alarm.

Their respective midweek matches, Chelsea's 1-0 defeat to Arsenal and Leicester's 2-1 win at Old Trafford, have perhaps thrown a spanner into the works of a contest that looks pretty one-sided on paper. But in truth those games little bearing on the FA Cup final, primarily because Chelsea were able to rotate players out of their first 11 on Tuesday whereas Leicester had to keep on grinding with the same few star performers.

That is arguably the biggest factor ahead of Saturday's game, taking precedence over the various tactical battles that also fall heavily in Chelsea's favour. Thomas Tuchel has the squad depth to have rotated heavily in the business end of the season, whereas Rodgers has asked the likes of Jamie Vardy and Youri Tielemans to play through fatigue.

That is the reason why Leicester's form has waned towards the end of the campaign – and why Chelsea's measured and controlling possession football should carve through a Leicester 11 that looks increasingly jaded. Tiredness, combined with the sort of jangling nerves that will not affect these experienced Chelsea players, makes Leicester second favourites.

As do the various tactical battles across the pitch, even if in theory the wider tactical pattern of the contest looks like it could favour Leicester's forwards. 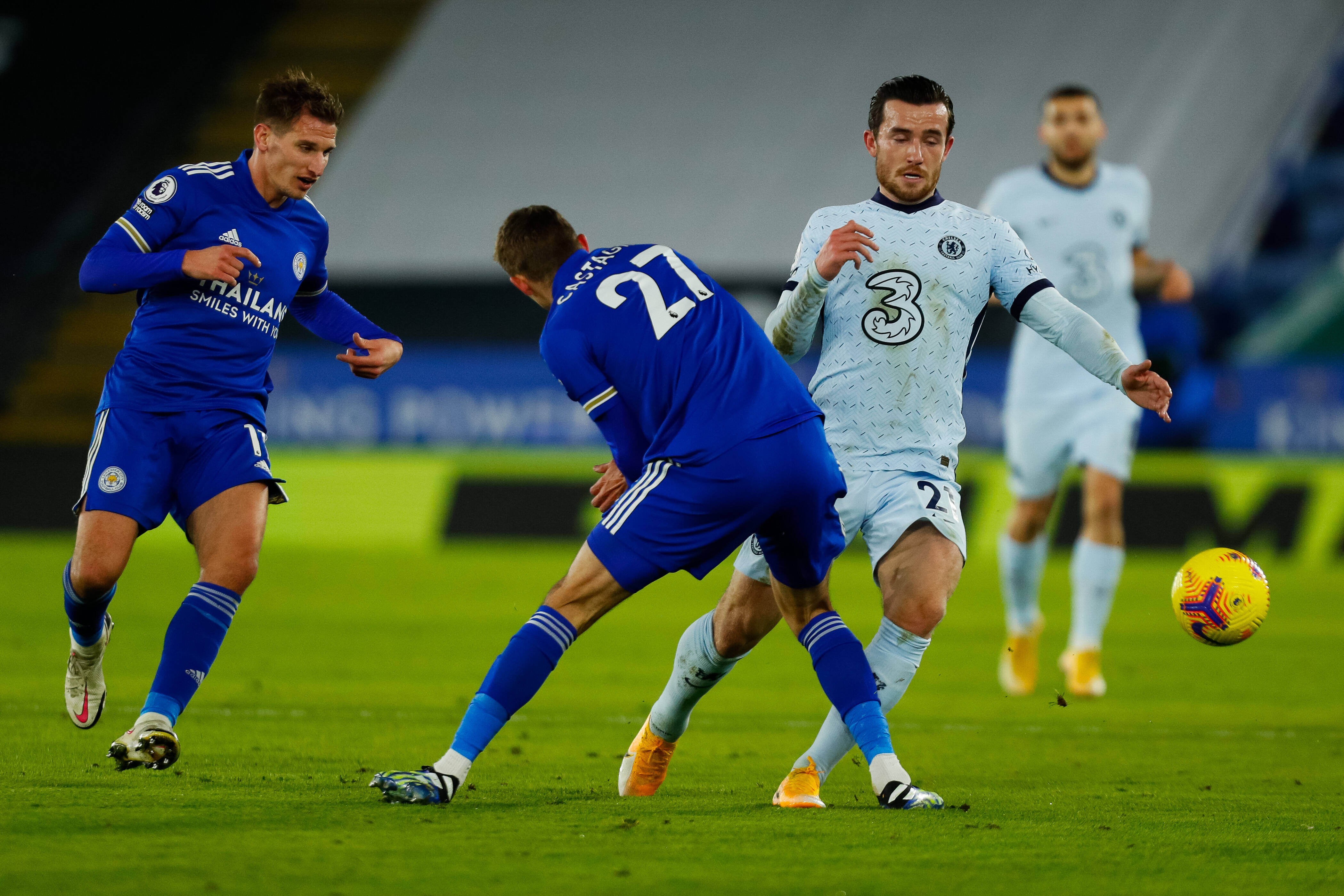 Chelsea will dominate possession as they always do, forcing Leicester onto the back foot and therefore into a more conservative and counter-attacking game. It is possible that relying on quick breaks will help Tielemans and James Maddison create chances, as well as allowing dual strikers Kelechi Iheanacho and Jamie Vardy to make dangerous runs in behind Chelsea's high line (Leicester will likely return to a 3-4-1-2 formation in order to match their opponents' shape).

However, Chelsea are generally very strong at defending counter-attacks filtered through the middle of the pitch, only really coming unstuck against teams capable of hitting the spaces behind their wing-backs, as West Brom did so successfully in their 5-2 win. Leicester don't have the right shape to do this, and with Harvey Barnes injured they rarely counter down the flanks.

The most important tactical battle of the game is in the middle of the park. Chelsea's box-shape midfield in their 3-4-2-1 is likely to outnumber and overwhelm Leicester's two-man midfield, a mismatch that should be characterised by the different energy levels of the two teams. For the Foxes, Tielemans – who has missed just 64 minutes of Premier League action this season and looks seriously jaded – is likely to be outmanoeuvred by the imperious N'Golo Kante, who has played just 68 minutes of football in Chelsea's last two games.

As Chelsea win the midfield battle and drive Leicester back, an even bigger problem may develop for Rodgers. Newcastle's 4-2 win last weekend was characterised by sloppy defending and total disorganisation at the back, with Jonny Evans' absence seemingly allowing the Newcastle forwards to breeze through on goal. In short, if Callum Wilson can regularly get in behind the Foxes' defence then Timo Werner will dominate the game.

Then again, perhaps Rodgers will spring another surprise, as he did by picking a 4-4-2 formation for the win at Old Trafford. The Leicester manager's greatest strength is his versatility and adaptability, making his team an elusive threat as he comes up with reactive tactics specific to the opposition.

Rodgers is yet to face Tuchel: perhaps he will have a specific plan for getting Wilfried Ndidi to neutralise Mason Mount; perhaps he will work out how to track Chelsea's inside forwards in a way nobody has yet managed.

More likely, Chelsea will win fairly comfortably. Leicester have won just one of their last three games and even that was an unconvincing performance against a reserve Man Utd team. Unfortunately, they are slowing down just at the moment Chelsea are speeding up. The evidence points to a Chelsea win on Saturday – and to Tuchel's side blowing up Leicester's campaign in the space of 96 hours.