Frank Lampard got one over his old mentor Jose Mourinho when they met in opposite dugouts in December, with Lampard's Chelsea beating Mourinho's Tottenham 2-0 on away soil. It was a statement win – one that opened up questions about the more experienced manager and led to praise for his younger counterpart.

Since then, however, Chelsea have won just two of eight Premier League games, picking up a rather disappointing nine points from a possible 24. In the same timeframe, Spurs have won four of eight, picking up 14 points. As a consequence, when the two managers meet again this weekend the gap between their teams is just one point.

Chelsea currently hold fourth spot, but Tottenham are closing in. Lampard will have to get his tactics right once again this Saturday if his side are to stay ahead of Mourinho's men in the table.

IF IT ISN'T BROKE…

The most impressive aspect of Chelsea's win over Tottenham two months ago was the element of surprise it involved. Since taking charge at Stamford Bridge, Lampard has favoured a back four in almost every game. Generally, he has gone with either a 4-3-3 or a 4-2-3-1. However, away to Spurs he set his team up in a 3-4-3. The change of shape was integral to the eventual victory.

That day, Lampard selected a back three of Antonio Rudiger, Kurt Zouma and Fikayo Tomori. Cesar Azpilicueta and Marcos Alonso acted as wing-backs, providing width on the right and left side respectively, while N'Golo Kante and Mateo Kovacic took up the central midfield roles. Up front, Tammy Abraham was supported by a roaming duet of Willian and Mason Mount.

The 3-4-3 system helped Chelsea to get good pressure on Spurs in their build-up, while the back three offered solid coverage of Harry Kane and Lucas Moura's dropping movements as well as extra protection against the runs in behind of Dele Alli and Son Heung-min. Tottenham found it hard to play out and penetrate their visitors, getting just one shot on target all game.

On Wednesday night, RB Leipzig set up in a similar setup – a 3-4-3 formation which supported a high press. They went on to get a vital away goal and win 1-0. Given his tactics worked last time, and similar tactics worked for Leipzig just days ago, Lampard may be best advised to dispose of the 4-3-3 that failed in the recent home defeat to Manchester United and revert back to the 3-4-3 this weekend.

PRESSING BENEFITS OF THE 3-4-3

Mourinho's Spurs may line up with a back four, but when they attack it often becomes a back three. Serge Aurier is positioned high up on the right, while the left-back stays much deeper and supports Davinson Sanchez and Toby Alderweireld in build-up. By lining up with a fairly narrow front three in the 3-4-3 system, Chelsea have direct access to press every member of Spurs' back three when they attempt to build out from the back.

In the image below, we see how Chelsea's front three positioned themselves defensively. They were compact and this made it harder for Tottenham to play into midfield, as the Mount-Abraham-Willian trident were blocking those passing lanes. This steered Spurs to go sideways and wide with their passing, which triggered Chelsea's pressing, with Lampard's front three always looking to press forward on sideways passes along Spurs' back line. 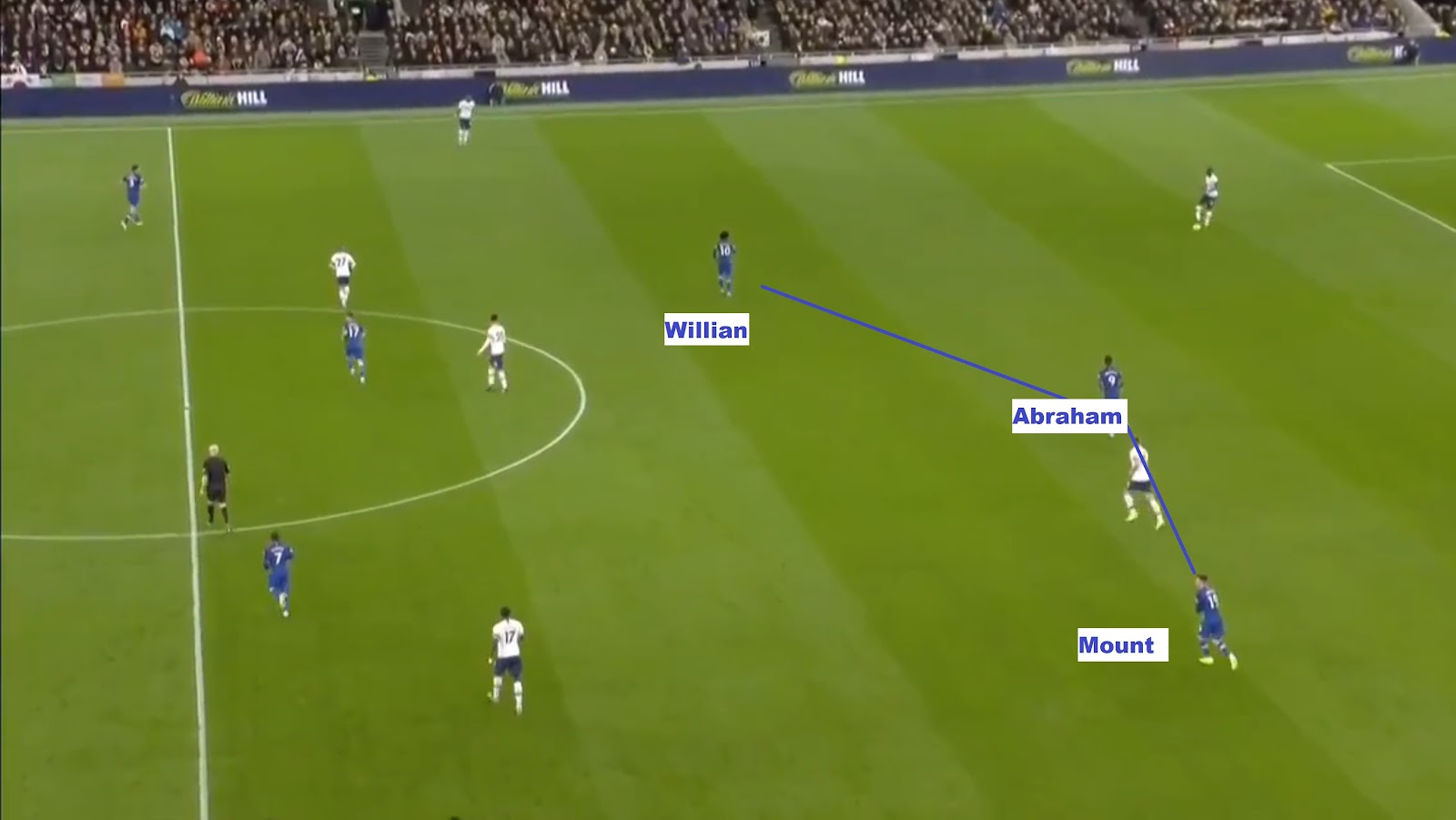 Tottenham have some exceptional movement in their own frontline, particularly from Alli and Son. Few are better at finding space in the channels than Alli, while few can exploit space behind at the speed Son can. By having an extra centre-back, Lampard reduced the space in those channels for the likes of Alli and Son to dart into and receive those trademark pinpoint long balls over the top from Alderweireld.

Not only did Chelsea's back three control these runs in behind, but it gave them extra cover to go man-to-man and be aggressive whenever a Spurs attacker dropped off to receive to feet. Below, we see an example of this. Lucas dropped to receive a pass to feet between the lines, but Tomori tracks him aggressively. Lucas, as quick and skilful as he is, has no choice but to go backwards. 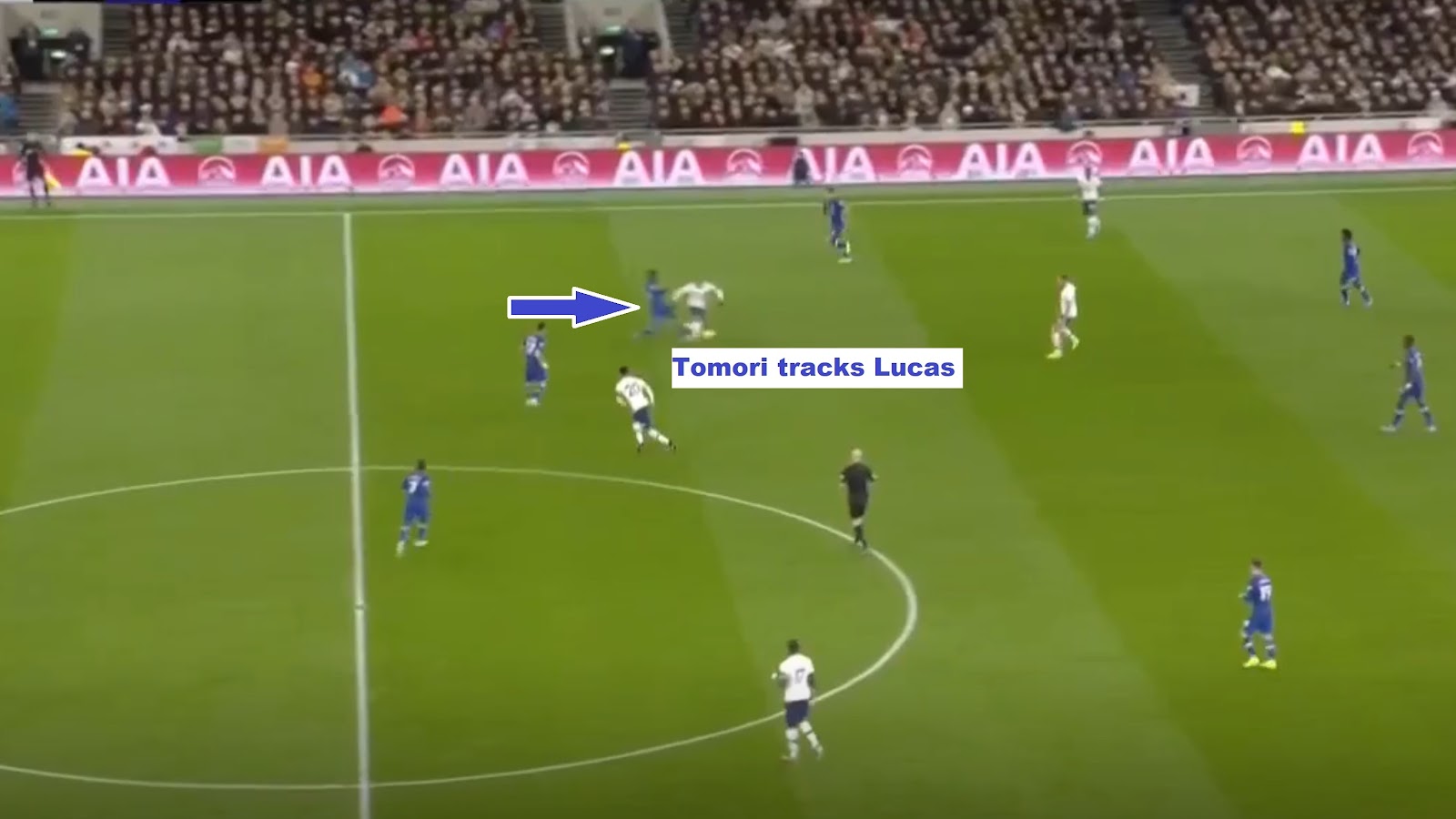 While the most noticeable benefits of Chelsea's 3-4-3 against Spurs are defensive, the system also allowed them opportunities offensively that Lampard would be wise not to overlook this weekend. Tottenham tend to defend in a zonal 4-4-2 mid-block, keeping a compact shape before pressing and counter-attacking.

In their 3-4-3, Chelsea's front three can force the Spurs full-backs to stay deep and narrow in their position so as to avoid 3v3 situations. This then poses the question: who deals with the Chelsea wing-backs?

As we can see in the below image from the first game, Mourinho doesn't want his wingers – Lucas and Son here – to track back with Chelsea's wing-backs. Doing so would take them further away from goal and reduce their threat in transition, which is a phase Lucas and Son thrive in with their pace. To have them acting as auxiliary full-backs just wouldn't maximise their counter-attacking qualities. So, as you can see circled, this left Chelsea's wing-backs free in last December's clash. 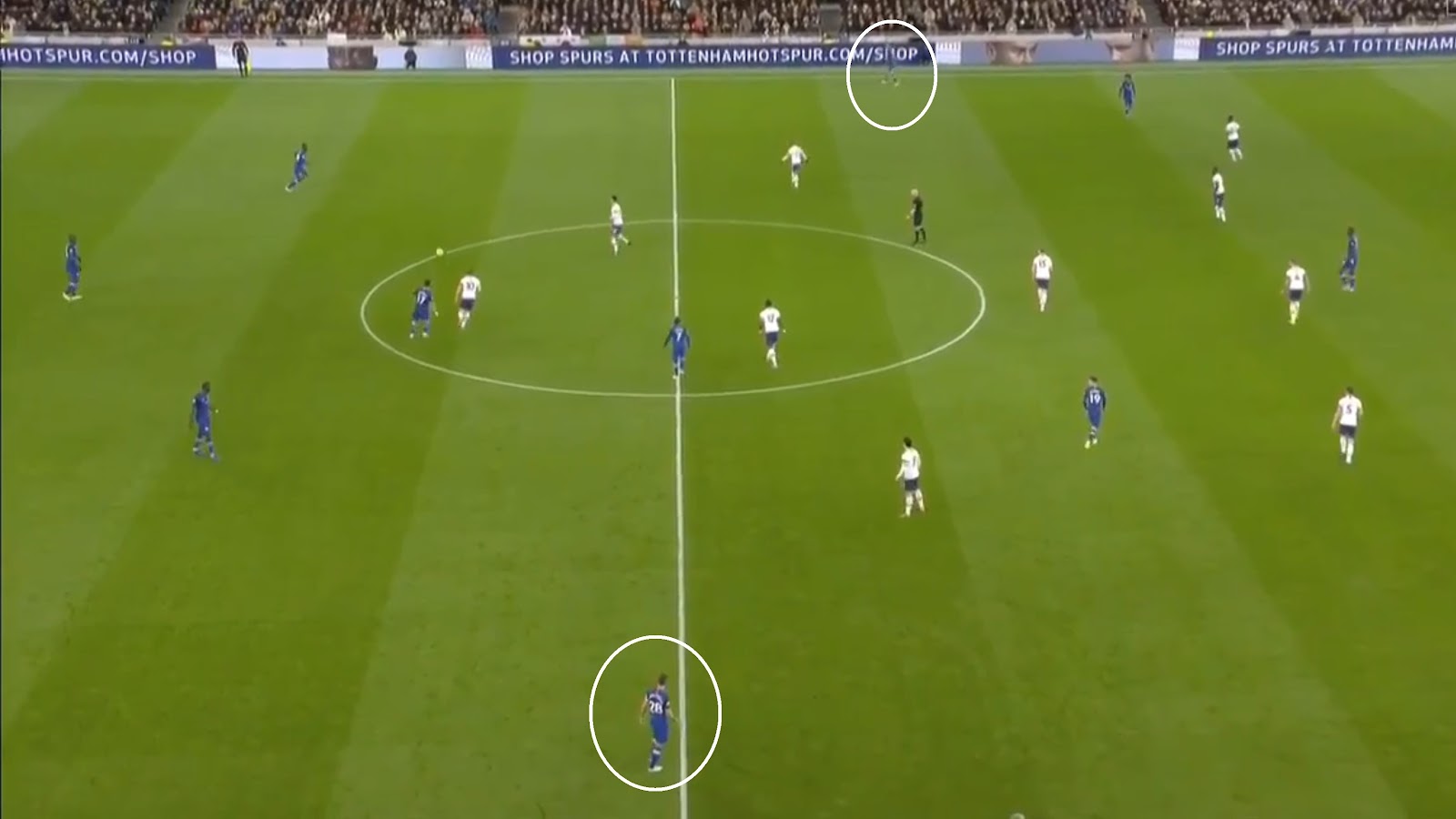 Unable to get real pressure on the ball, Tottenham also couldn't cover Azpilicueta and Alonso, giving Chelsea an easy out-ball to pass to. From there, the wing-backs could try to work overloads on Spurs' full-backs, creating 2v1s with Willian or Mount to combine and attempt to penetrate the last line.

Another benefit of the wing-backs is that they give Chelsea the option of quickly switching the play to the far side. This is something Lampard may look to do more of this weekend, particularly if he starts Reece James at right wing-back over Azpilicueta.

While the Spaniard offers defensive solidity and decent crossing, James is a more rounded attacking outlet. In his debut season with the first team, he not only averages 0.8 key passes per WhoScored, but he performs 1.5 dribbles per game. For context, only three of his teammates – Kovacic, Willian and Christian Pulisic – attempt more.

Using quick switches from left to right could be a good way of getting James on the ball with space to use. From there he can drive forward, generate momentum and take on defenders before whipping in crosses or exchanging with the forwards.

Mourinho has turned around Tottenham's form in recent weeks, and he may well have a surprise of his own up his sleeve for this Saturday's game. But if not, Lampard could lead his side to victory once again with his 3-4-3 system.