Wayne Rooney's Derby County delivered a stunning upset over promotion hopefuls Bournemouth, Tyreece Campbell shone for Stoke City and Hull were gifted a goal-line decision against Birmingham in the latest round of the Championship...

Whatever you say about Derby County, and believe me a lot has been said these past few months, you can't knock the spirited and thick skinned attitude that Wayne Rooney and his players have shown at times this season. Off pitch is a different matter entirely, but on the pitch, not for the first team this season, Derby showed great stoicism and a sense of siege mentality to pull out a hugely surprising win.

It was after the Rams went into administration that we first saw this type of performance, as the Derby fans filled Pride Park and the players delivered a surprising win over the side who currently sit fourth in the Championship, Stoke City. Lightning struck twice this weekend, in even more unlikely circumstances as Derby were victorious against Bournemouth, who went into the weekend as table toppers having been beaten only once all season.

Jason Knight took advantage of some statuesque marking in the Bournemouth box to head in Max Bird's corner and give Derby the lead, however Bournemouth quickly flipped the script to go in at half-time in front. A dreadful short goal kick routine ended with Jaidon Anthony equalising, before Dom Solanke ended a really incisive passage of Bournemouth passing with his 14th league goal of an excellent season. The second half did not give us the predictable Bournemouth victory but another turnaround, as Tom Lawrence curled the equaliser and then drilled home the winner from the spot following Jack Stacey's foul on Graham Shinnie.

Following Derby's second points deduction, this victory may prove to be a mere footnote in a traumatic season, and serves only to put the Rams back to where the rest of the league started on zero points. However, it should be said that as the club tries to recover from this low ebb, such character and siege mentality in adversity might well be a good start. 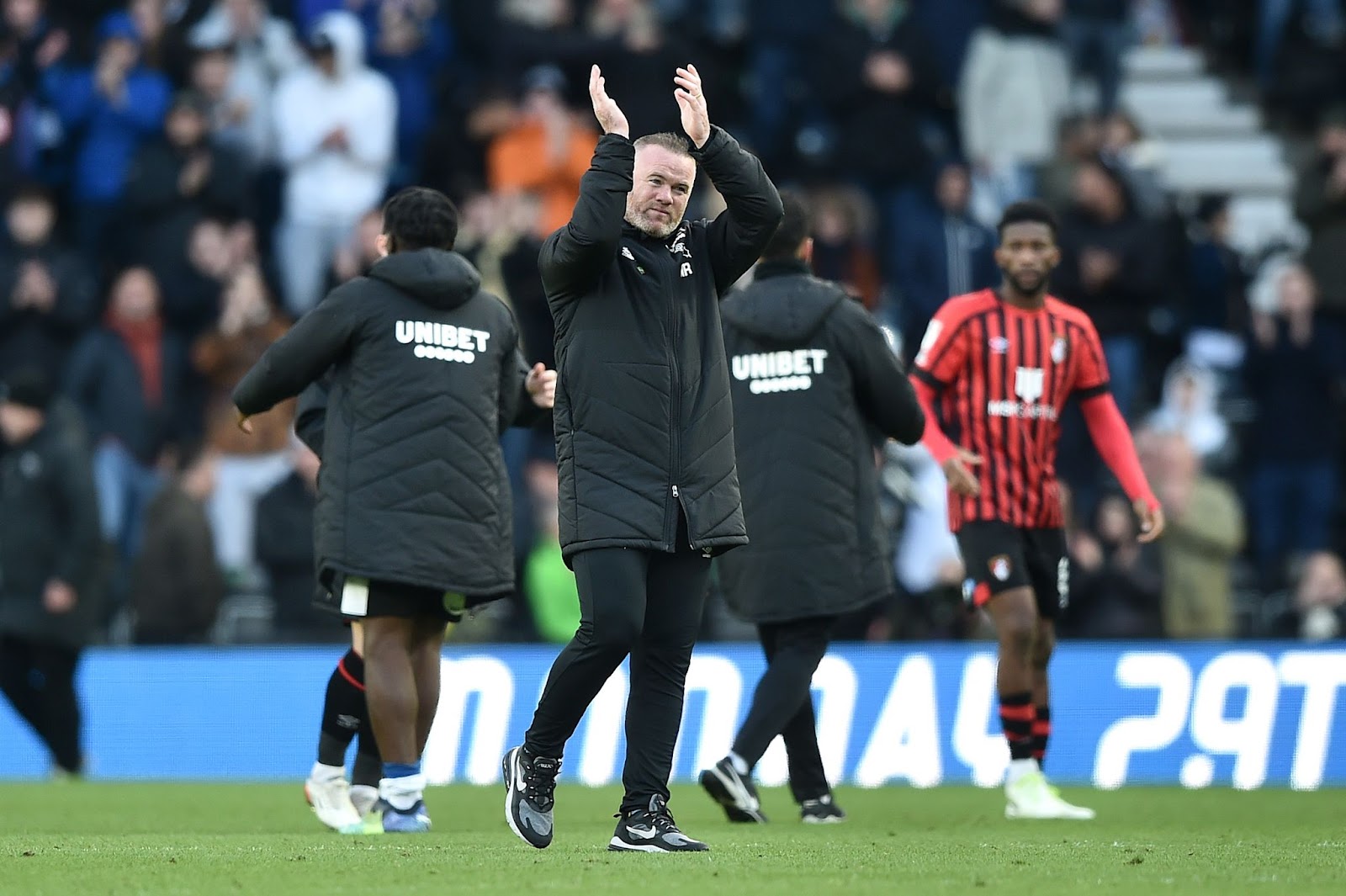 I love a good football cliche but get a little confused when two opposing ideas contradict one another. For example, I think 'absence' does most definitely 'make the heart grow fonder' but also understand that it's sensible to not 'believe the hype'. In the case of Tyreece Campbell these two differing platitudes seem to amplify the other in a strange exponential cliche feedback loop.

Campbell last started a game for Stoke on 8th December 2020 against Cardiff City, and nearly one year down the road injury problems mean he hasn't started one since. Stoke have been very quiet and careful when it comes to Campbell's recovery, and his five substitute appearances so far have amounted to an average of just 19 minutes per game. The reason Stoke are being so careful is also the reason Campbell's absence has made Potters fans' hearts grow fonder for him, as the forward was a key player and had accumulated 11 goal contributions in 13 starts at the point of his injury last season. Campbell's absence seemed to clearly contribute to Stoke's drop off as the season fizzled out into an underwhelming 14th place finish.

Saturday's win against Peterborough did not give us Campbell's return to the starting line up, but it did give us his return to the scoresheet. With Stoke defending a one goal lead and in the wake of his strike partner Sam Surridge being red carded, Campbell scored a trademark goal to confirm the three points for Stoke. Once the ball was won by Mario Vrancic, Campbell ran from inside his own half, sent the covering Peterborough defenders inside then out, feinted to shoot across the keeper and arrowed it into the near post. He may not be back in the starting XI, but Campbell is back on the goal trail, and maybe I can 'believe the hype' again after all. 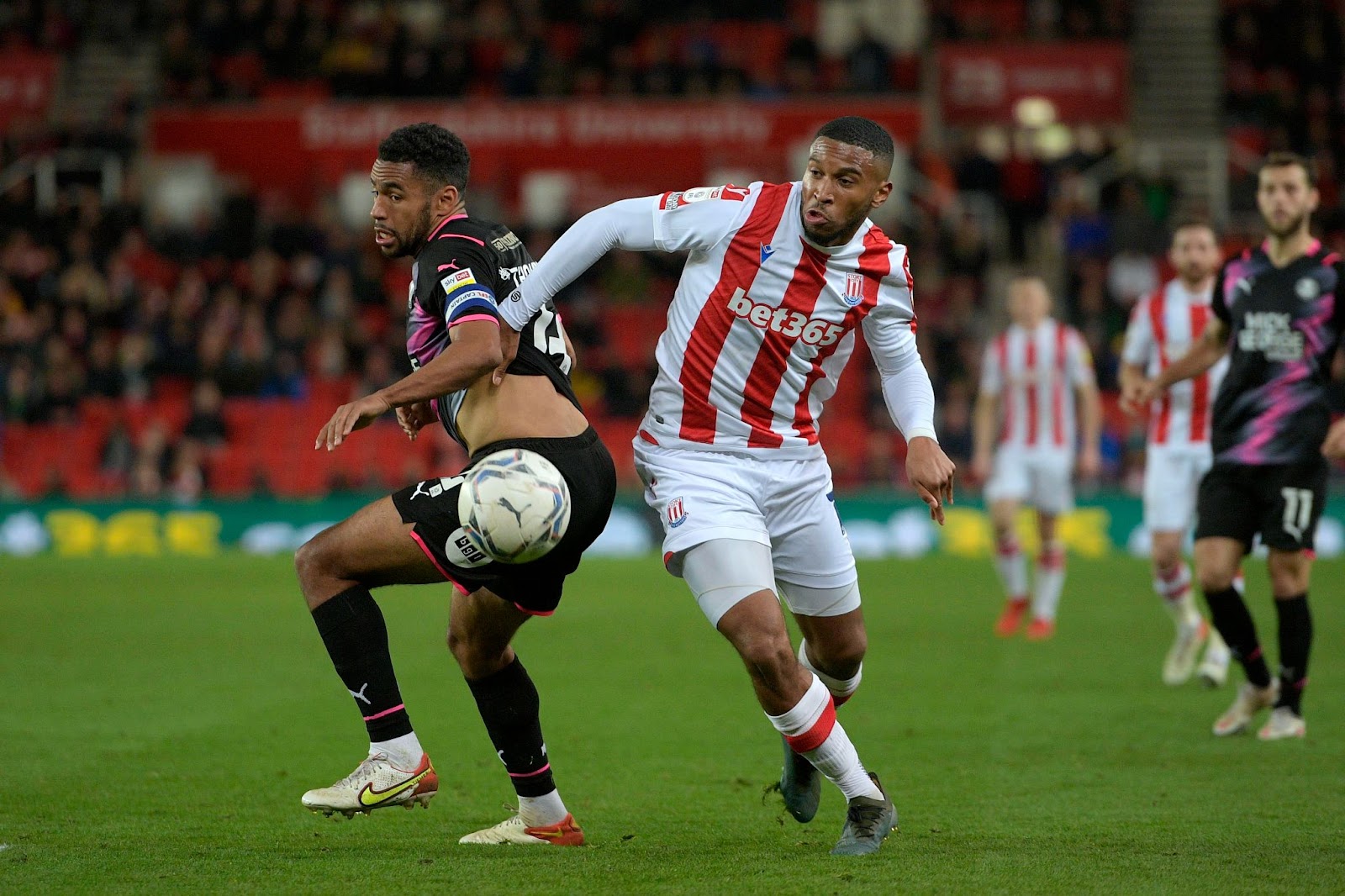 There are very few absolutes in football, as a result I spend an inordinate amount of time reminding people that there is no such thing as a definite penalty, foul or yellow card in football. A struggle to cope with fact versus subjectivity is not only limited to football in the modern social media world, but that's a far longer and trickier landscape to navigate, and for once we have a refereeing controversy that's frankly not very controversial.

In the 17th minute of Birmingham's visit to Hull on Saturday, Tigers wideman Ryan Longman took the ball to the byline and cut it back into the six yard box. The surrounding Birmingham defenders all raised their arms in unison to appeal the ball had gone out of play and George Honeyman poked the ball into the net. There was a pregnant pause as referee Harrington looked to his linesman, he received a blank look back and his flag stayed by his side. As two awkward seconds turned to five, the Hull players moved towards Honeyman to celebrate and the Birmingham players moved towards Harrington to protest. In the VAR less world of Championship football, once that four or five seconds elapse and no decision is made, players, fans and managers all know that there is no going back.

The replay was conclusive, we didn't need VAR lines zooming into the nearest centimetre, the ball was clearly out of play, Hull got lucky, Birmingham got unlucky. The more balanced Blues fans will confess that had Scott Hogan not missed a one v one and Gary Gardner foolishly got himself red carded either side of the goal that shouldn't have been, they could've helped their cause. As it turned out it was Hull who took advantage of their luck and extra man in the second half to win the game 2-0. Apparently bad decisions even themselves out by the end of the season, so keep an eye on Birmingham and Hull in the future to see if this one gets levelled up. 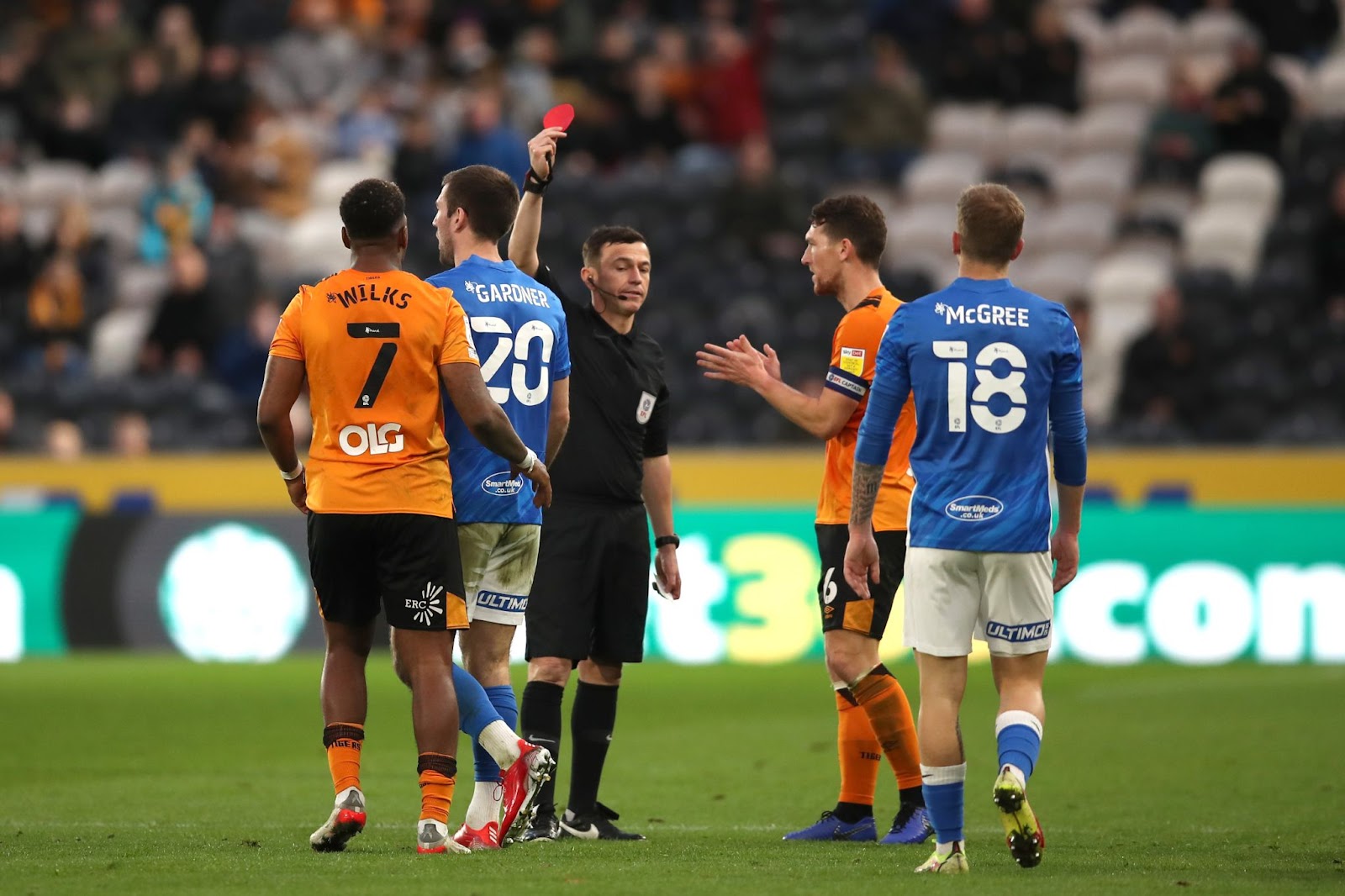 LOANEE OF THE WEEK - Danel Sinani (Huddersfield on loan from Norwich)

It's been an interesting journey taken by Danel Sinani to wind up at the John Smith's with Huddersfield this season. Sinani, who was born in Belgrade, grew up in Luxembourg and was quite the star in his country of citizenship with Racing FC and Dudelange, gaining notoriety for his exploits in European competition against far more established clubs. Sinani's reputation scored him a move to Norwich City in 2020, where sporting director Stuart Webber had unearthed, at the time, lesser known gems like Teemu Pukki and Emi Buendia.

Sinani spent his first season at Norwich on loan in Belgium with Waasland-Beveren, but a potential breakthrough in English football was dangled this season with a loan to Championship side Huddersfield. Sinani linked up with Carlos Corberan, and contrary to the expectation of many, including myself, Huddersfield are currently challenging just outside the play-off positions. Operating in the main from a right sided attacking position, Sinani has now started 12 times for the Terriers this season and, having got his debut goal the game before the international break at Cardiff, the 24 year old has now scored in back to back games.

Just five minutes into the clash with third placed West Brom, Sinani was in the right place at the right time as Huddersfield beat the Baggies offside trap and Danny Ward squared for an easy tap in. Sinani's journey may be unorthodox, but having played himself into a side in the top half of the Championship, if the goals keep coming then the reports back to Norwich may land in new boss Dean Smith's no doubt very full in-tray. 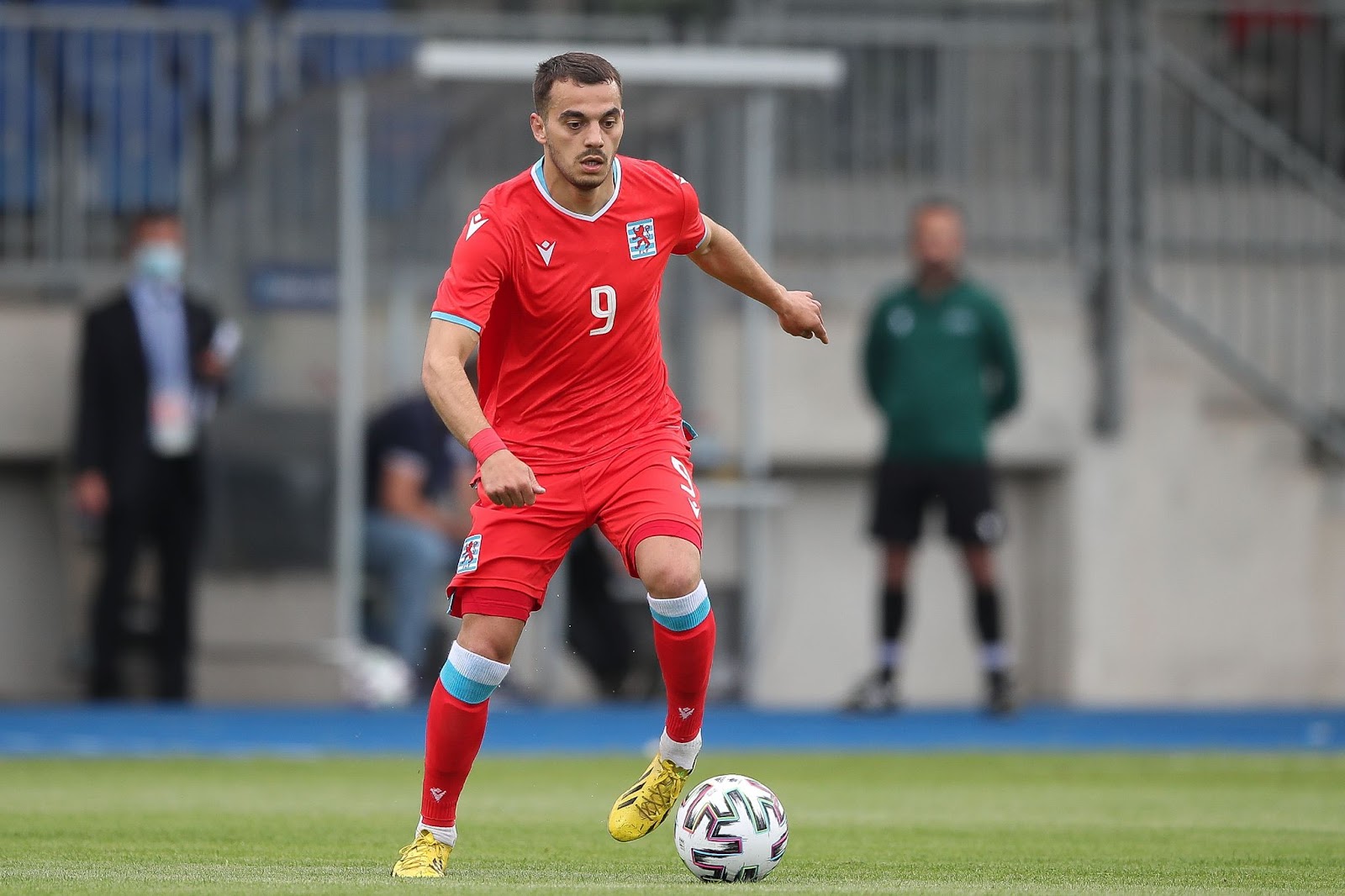