The dramatics around Derby County's survival dominates our final review of the Championship season before the playoffs, with a Man City loanee a hero and Rotherham's relegation needing examination.

On 'Survival Saturday' there will always be a decisive goal or decisive moment that confirms the final destination for one or more teams in the relegation zone. We know the season lasts 46 games, but the heightened level of context in those final 90 minutes can make for thrilling viewing. This year's 'Survival Saturday' did not let us down.

We knew Wycombe were as good as relegated and needed an incredible goal difference swing to stay up, Rotherham had to beat Cardiff, and Sheffield Wednesday had to beat Derby in a dramatic head to head match up. If it was dramatic on paper, then what happened on the pitch went over and above. Rotherham led early at Cardiff, and when Sheffield Wednesday scored to gain a half time advantage, both Derby and Wednesday were headed for the drop.

A crazy second half ensued, with Derby striker Martyn Waghorn at the heart of the comeback and eventual survival for the Rams. First he equalised, heading in a Tom Lawrence cross, then he slipped in Patrick Roberts, who curled left footed to put Derby in front. Waghorn's three minute goal and assist was keeping Derby up as things stood. Unbelievably, Derby were behind again by the 70th minute, with Paterson and Borner giving them a 2-3 lead, and with Rotherham still in front both sides would be going down.

And then it happened, the mad minute. Marlon Pack equalised at Cardiff, meaning Sheffield Wednesday's 2-3 lead would see them stay up. Seconds later Waghorn fed through Jozwiak who was felled for a 78th minute penalty that would ultimately be the difference between survival and relegation for Derby and Sheffield Wednesday. Waghorn stepped up, scored from the spot, and within that short window all three of our endangered clubs had their turn outside of the relegation zone.

Fortunately for Derby, they scored last, and when the music stopped they survived. It was an enthralling and intense watch, and though he may be thought by some as a Championship journeyman, Waghorn delivered and Derby stayed up.

It feels like we tread a fine line between praise and patronising when it comes to Wycombe's 20/21 season. The Chairboys final day win means that the team many predicted to finish bottom were actually in 22nd at the season's end, closer than both their fellow relegated teams to surviving.

There have been times this season where Wycombe have looked well out of their depth. There were seven straight defeats to open the campaign, and a run of one win in 17 through a tough winter at Adams Park. Their finish has however been excellent, and whether the psychology of having nothing to lose helped, the numbers tell us that adding even a single game on to their end of season surge could have seen Wycombe staying up.

It was a fifth win in eight at Middlesbrough for Wycombe as they said goodbye in to the Championship. Yes, the final day always throws up lots of goals and some odd results, but there was form for this one. Onyedinma, McCleary and McCarthy had Gareth Ainsworth's team three up with just ten minutes of the second half played, and that is how things stayed.

Much was made of Wycombe's promotion last season, with points per game bumping them into the playoffs when lockdown hit. Much is also made of their long haired, leather jacket wearing manager Gareth Ainsworth. The future for Wycombe and Ainsworth feels a little unsure at the moment, the Preston job is open and the link is obvious. What is more certain is that Wycombe did not disgrace themselves at all in the Championship, and if the run in is anything to go by, they won't be away long. 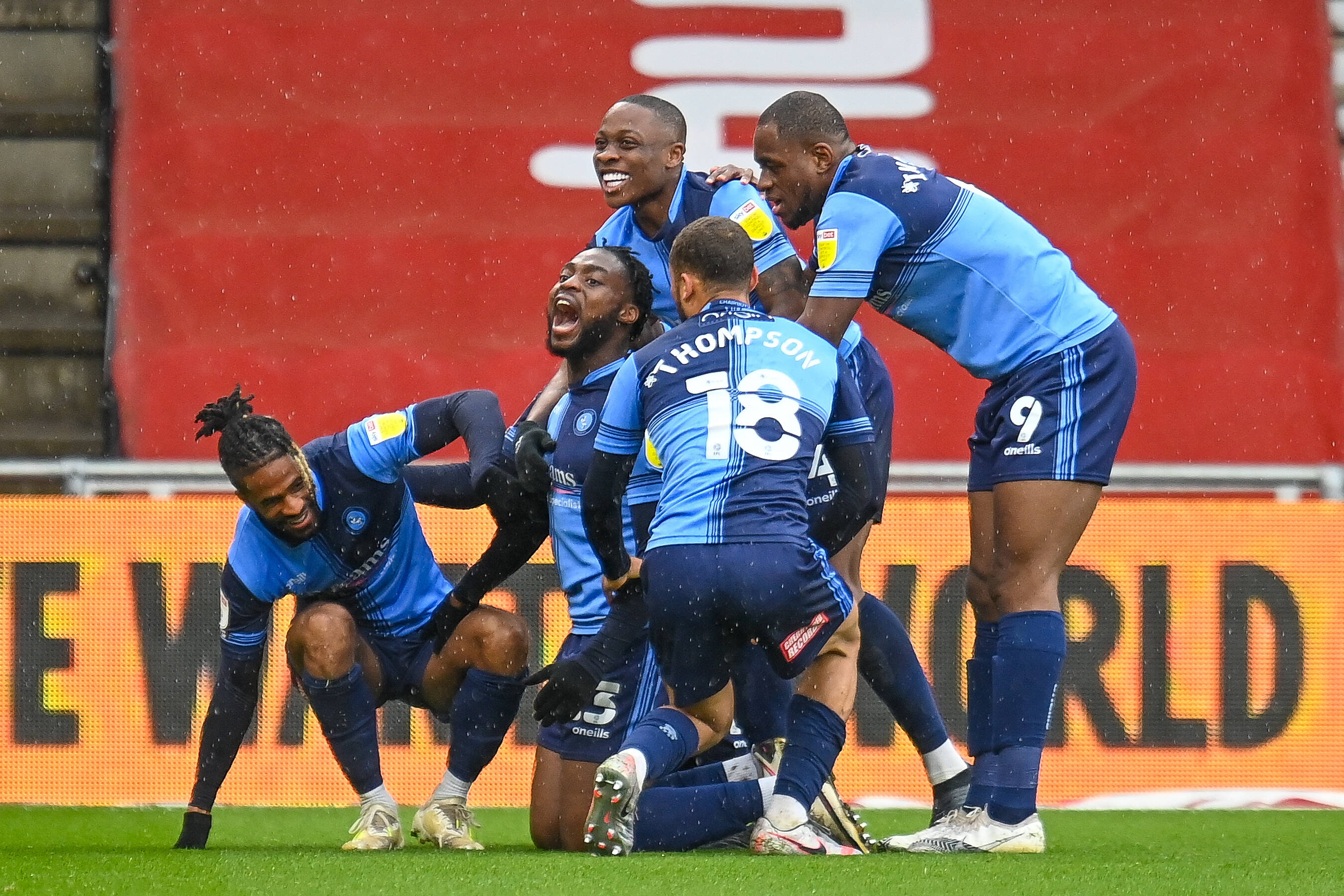 We're going back to Derby for our loanee of the week, where a new story meets an old one. Patrick Roberts has been on the radar for a long time, since making his debut as a 17 year old for Fulham in 2014. This is the familiar part of the story, in fact a tale as old as time in football terms; wonderkid bursts onto the scene and is quickly whisked off to the top for big money.

Roberts ended up at Manchester City, for what we can only assume was a sizeable undisclosed fee, and this is where we get the new part of the story. I call it loan purgatory, where a young player signs a long contract at a big club for wages higher than they'd receive in any league they would be loaned to. The player can't make an impact at the parent club, and the club he is loaned to couldn't possibly afford him permanently. What then takes place is years of loan moves and the player becoming something of a white elephant, think Cameron Carter-Vickers, Matthew Pennington, or even Harry Wilson.

Roberts had spells at Celtic, Girona, Norwich, and Middlesbrough, the talent is obvious but it feels as though a permanent home would allow it to flourish. His latest stop is Derby, arriving in January when Wayne Rooney bolstered an unbalanced squad with as many loanees as he could. The winger has been a little in and out in a dreadful end of season at Derby, but showed all his talent in curling home a vital second goal in Saturday's relegation escape.

As I understand there is a further year on Roberts Manchester City contract, so it wouldn't surprise anyone to see another loan move next season, probably to the Championship, maybe to Derby. I wish this talented player well, and hope that he doesn't fulfill another common old football tale, that of a talent never fully realised. 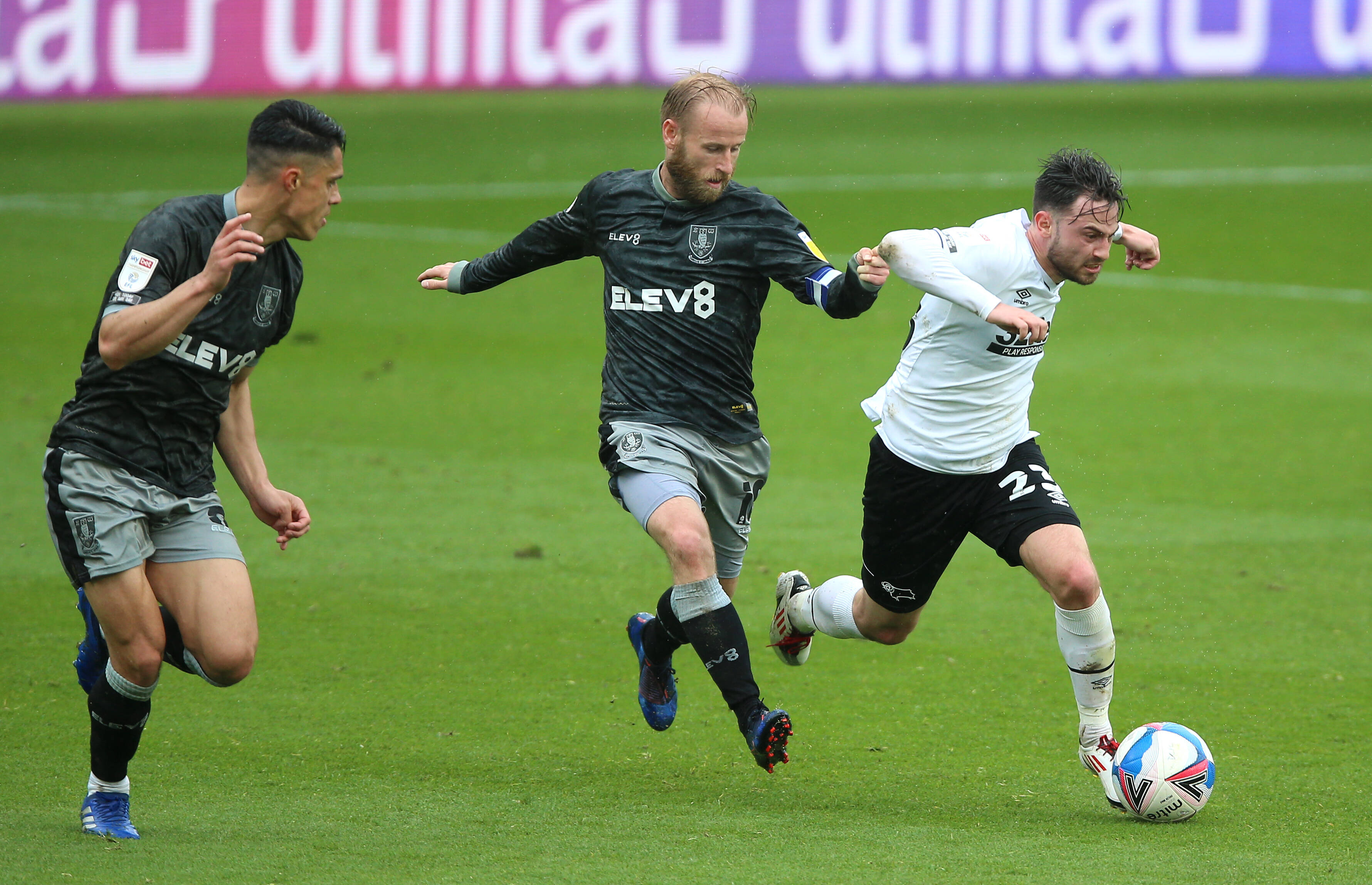 With all of the kerfuffle at the bottom of the table nobody paid too much attention to the top six on the final day. Norwich and Watford took the top two spots ages ago, and we knew who the playoff sides would be, just not yet in which order. Brentford were guaranteed third, and when I saw the strength of the Bournemouth starting XI, it looked like Jonothan Woodgate was pretty eager to win, and avoid the Bees in a two legged semi. If Bournemouth were trying to avoid Brentford it didn't work, they lost 0-2 at home to Stoke, and with Barnsley drawing with Norwich, the playoffs were confirmed as Brentford v Bournemouth and Swansea v Barnsley.

A couple of very interesting match ups no doubt, and we'll analyse them in more detail down the road I'm sure. A quick thought or two brings me back to a splendid game between Brentford and Bournemouth in the winter, with Bournemouth starting well and taking the lead, before Brentford came back to win 2-1. From a pure footballing point of view, it was a great watch. And then there's Swansea, tight and effective for much of the season before tailing off, versus swashbuckling Barnsley, in what could be a more attritional affair.

With a week to prepare, we can all take a moment and look forward to the annual five game slugfest. The playoffs rarely fail to deliver, good luck to all involved. 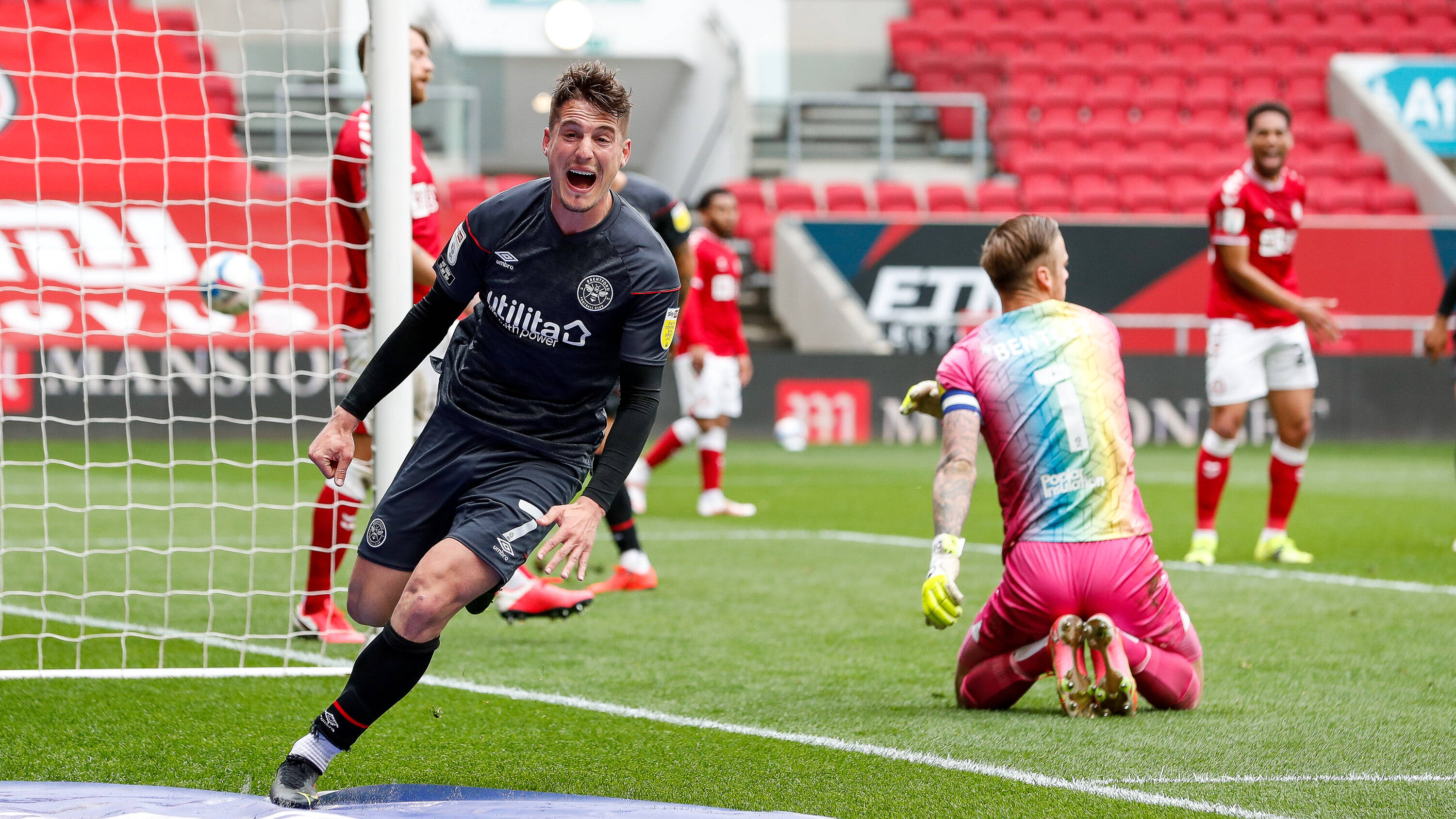 What if they'd loaned in different players in summer? Feels to me a bit like Hirst, Jozefzoon and Blackman could have contributed more. Speaking of loanees, what if they'd had Lewis Wing and Ryan Giles all season? Both arrived in January, and Wing particularly has made an impact.

What if they hadn't had all those Covid problems? There were outbreaks at Rotherham throughout the season, and whilst safety is the biggest concern, the disruption and fixture congestion at the end of the season can't have helped. And finally, what if Marlon Pack hadn't equalised for Cardiff with two minutes of the season to go? Would Derby have been able to get a winner against Wednesday? Maybe not, and then Rotherham would have survived.

It's all done now, and Rotherham are relegated again, for the third time under Paul Warne. We'll see what path the Millers take going forward, maybe they continue their journey together, maybe not. Oh, and go and check out that tune, hopefully it's as fun as I remember. 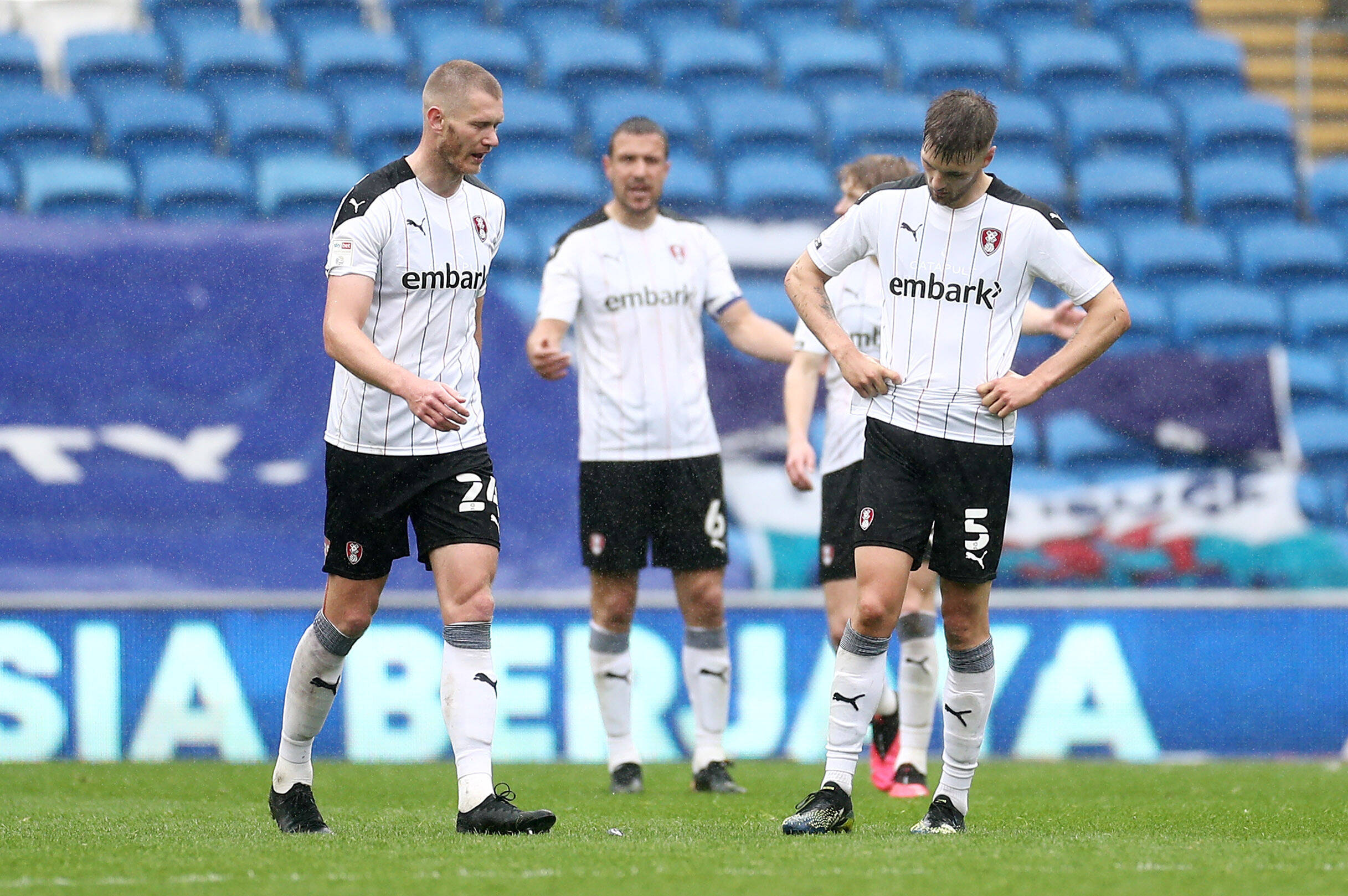