For this week's review of the Championship, the relegation battle tightens up in the last round of matches as Derby lose, Rotherham draw and Wycombe shock Bournemouth.

I try my best not to repeat myself in these columns, certainly when it comes to player of the week, however this week I'll make an exception for previous winner Ivan Toney. In Brentford's 2-0 win over Watford on Saturday, Toney became the first player to score 30 goals in a Championship season since Glenn Murray for Crystal Palace in 2013.

Toney is in his first Championship season having arrived from Peterborough, and has been outstanding. He has quickly become a leader at Brentford, a great all rounder on the pitch, and this after the Bees sold stars of last season Watkins and Benrahma. And then there are the goals, which have flowed with brilliant regularity since he opened his account against Millwall in late September.

In a fashion not too dissimilar to Glenn Murray, Toney has coasted over the 30 goal finish line with only two goals in his last eight. This was all made possible by a run of 28 goals in 32 starts as Toney put himself firmly at the top of the Championship scoring charts. Since the Championship was branded such in 2004-05 only Toney and Murray have managed a thirty goal haul, with Lee Hughes and Guy Whittingham the only other 30 goals players since the 1992-93 debut Premier League season.

Those who like to play down others achievements, and there are many in the football fan space, will point out that Toney has scored nine penalties this season, with goal number 30 also coming from the spot. I've never quite seen the penalty criticism myself, a goal is a goal, it's the hardest thing to do in the game, and Ivan Toney has done it very well this season. Congratulations.

As the season comes to a close next weekend, plenty of teams on the proverbial beach will meet in dead rubber games, where traditionally we get plenty of high scoring affairs. I'm going to ignore all the goals this weekend and go for a good old 1-0 home win secured by Wycombe Wanderers over Bournemouth for my team performance of the week.

Whilst it's not my intention to patronise Wycombe, it's quite the surprise that they go into the final week of the season still in touch with those outside the relegation zone. Wycombe were promoted as League One playoff winners, are one of the smaller clubs to have grace the second tier, lost their first seven games, and recorded just one win in 17 in the middle of season. The Chairboys have put up quite the fight to not finish adrift at the bottom, their recent form is 24 points in 18 games, which extrapolated over a full season would seem them pushing for the top half.

I chose my words carefully earlier in the column in saying that Wycombe are 'still in touch' with those outside the relegation zone, the truth is that goal difference means it would take a miraculous sequence of events for Wycombe to actually survive. Namely Rotherham losing both of their games, Sheffield Wednesday beating Derby by a single goal, and Wycombe themselves recording a 14 goal win away at Boro next week. It's not going to happen surely, but the fact I'm sitting here even having to do the maths, is testament to Wycombe being a competitive influence as a Championship club this season. On the first day of last season I took myself to Kenilworth Road for the Championship curtain raiser, it signaled the new season, Luton's return, and it didn't disappoint. In textbook Championship fashion I witnessed a 3-3 draw comprising a huge goalkeeping blunder, missed penalty, and a long range beauty from Boro's Lewis Wing.

A lot has changed since then, Woodgate's Boro was a short lived experiment, Neil Warnock was parachuted in, and that's before even mentioning a global pandemic. For Lewis Wing change has meant he's been loaned out to Rotherham, where he is trying to help the Millers avoid yet another Championship relegation.

Wing is a technical central midfielder, with an eye for a long range goal, and a decent set play taker. On Saturday his free kick gave Rotherham a vital goal against Blackburn and kept them in the relegation battle. Rotherham have been on a losing streak stretching five games, and with four of those defeats ending 1-0, it's safe to say that goals have been at a premium.

Rotherham are the only team seeking to avoid relegation in the final week of the season who have a game in hand. As fate would have it the game is at Kenilworth Road, Luton, the scene of Wing's long ranger in what really seems another time and place. A Rotherham win would set up an incredible final day, with three teams all on 43 points, and Millers fans hoping Wing can deliver another stunner at 'The Kenny'. Lewis Wing all fired up after scoring for Rotherham

As Tom Lawrence threw himself at Nathan Byrne's cross and headed Derby in front at Swansea on Saturday, every neutral with Championship knowledge and a basic grasp of maths lamented the end of the season as we knew it. The Lawrence goal meant Derby were leading, and at that stage with Rotherham also losing, we were headed for a very dull last weekend of games. I'll talk more about Derby in the next segment of this column, but, spoiler alert, they lost and Lewis Wing's equaliser for Rotherham means there is plenty to play for going into the final week.

First up is Rotherham's game in hand at Luton on Tuesday. The Millers are three points behind so nothing can be properly decided ahead of the weekend, needless to say a win would be massive, and would set up a potential scenario where Rotherham could lose at Cardiff on Saturday and still stay up. This is all because of the final day showdown between Derby and Sheffield Wednesday, currently 21st and 23rd in the table. Regardless of Rotherham, Derby will know a win in that game would see them above Wednesday, however defeat and we're into the realms of goal difference where Sheffield Wednesday's single goal advantage would see them move above Derby if the Owls can get a win.

Speaking of goal difference, if Wycombe win at Boro, Rotherham win one and lose one of their final two, and Wednesday beat Derby, then the entire bottom four would finish on 43 points, and barring any giant scores it would be Rotherham that survived on goal difference. Knowing the Championship I could sit here and create twenty different scenarios and none of them be right, so I'll stop, and point you towards a tense couple of hours at 12.30 on Saturday.

It's been tough, but I think I've left enough material to dedicate this week's controversial event to Derby County and the possibility of their relegation next weekend. In a tale that reads like a Shakespearian tragedy, Derby are on a six game losing streak, and we know if it goes to a seventh defeat, the Rams will be going down.

Derby have been flirting with the drop all season, and were down at the bottom after a poor start under Phillip Cocu. Cocu was fired and replaced by England great Wayne Rooney, the form looked good and Derby looked to have made themselves safe, however injury to key midfielder Bielek, lack of goals, and this latest streak leaves them highly vulnerable going into the final day.

All of the on-pitch misgivings have been compounded by chaos off the pitch, with owner Mel Morris keen to sell, and an on-off takeover scenario looming in the background for seemingly six months or more. The takeover appears to be nearing a successful conclusion with Erik Alonso's 'No Limited Sports' offer having been accepted and currently with the EFL for the infamous owners and directors test. Whether or not the potential owners had reckoned on a relegation as the starting point for the tenure is not clear.

There are still plenty of twists and turns in store, starting with Rotherham's trip to Luton on Tuesday. Derby fans will hope for some help from Luton, but any Rotherham points will be an absolute nuisance for Wayne Rooney. If the Millers lose then Derby know a draw in the head to head with Sheff Weds will suffice, if Rotherham draw then they could still sneak ahead of the Rams next weekend with a final day win. The absolute worst case scenario for Derby is a Rotherham win on Tuesday as the Rams know that even if they beat Sheffield Wednesday they could still go down.

It's all eyes on Kenilworth Road Tuesday, and a long anxious week for fans of Derby County. 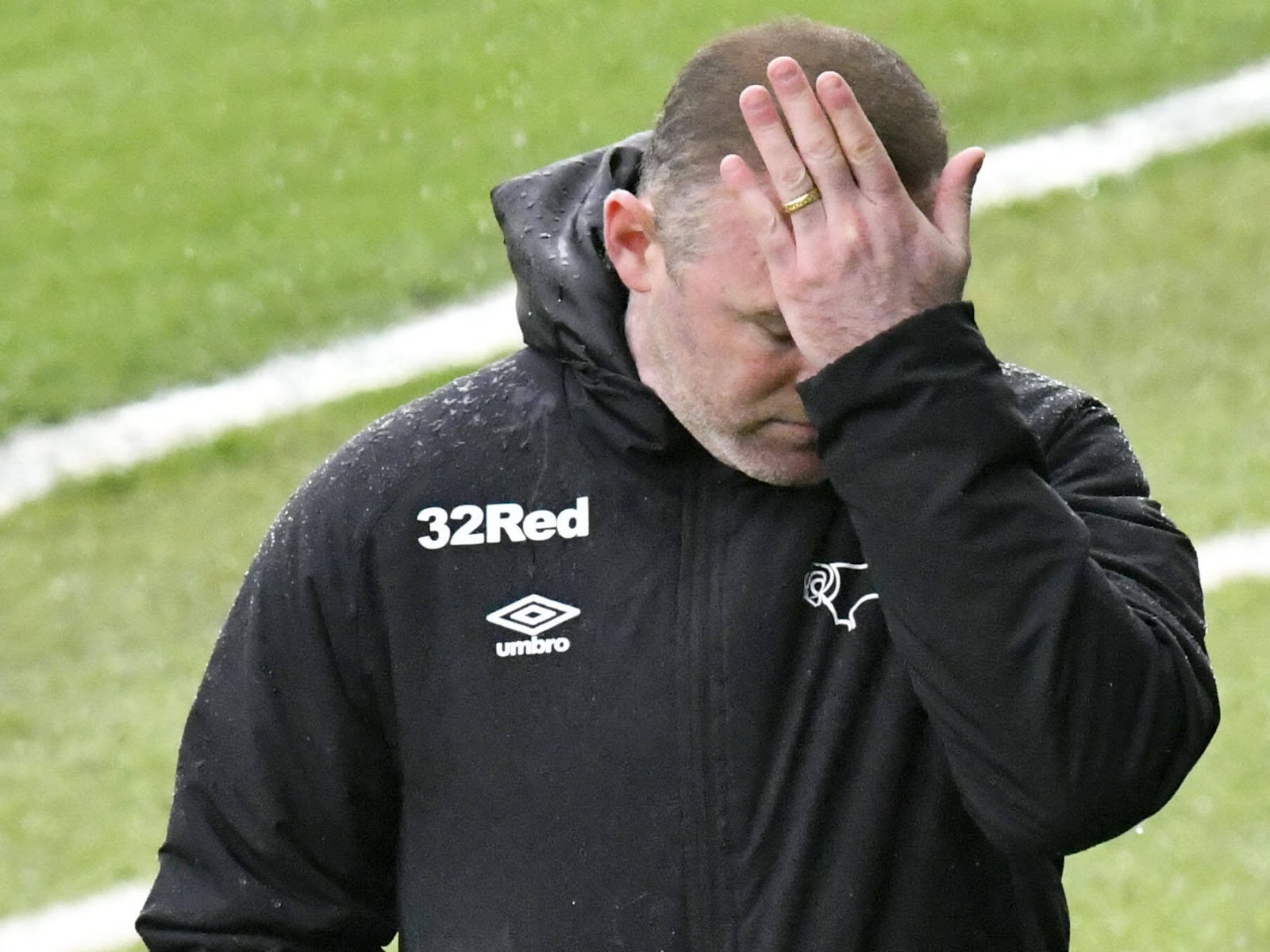 Rooney during the loss to Swansea City