Barnsley edged a five-goal thriller against Middlesbrough, Cyrus Christie inspired Swansea City and there was more chaos at Coventry City in the latest round of the Championship...

We've already seen two pretty decisive quick sprints by teams in the Championship bottom six this season. Hull City surprised everybody with their run during November, having picked up just nine points in their first 14 games the Tigers banged out four straight wins and haven't been in too much trouble since. Cardiff City also completed a quickfire four victories in five games during early February to leave themselves a healthy looking gap over the bottom three and give new boss Steve Morison some vindication around his appointment.

When it comes to Barnsley it'll take much more than a quick run of four wins to get them out of trouble, but the Tykes have recorded three in their last four Championship games. The latest Barnsley win came at home to high flying Middlesbrough, we should be surprised by their ability to beat a top end side but regular Championship watchers will note their last home win was against even higher flying QPR. Barnsley raced into a three goal lead with Mads Andersen heading the first before Amine Bassi scored goals two and three. Boro did get two goals back, but with the second coming in the 95th minute it was too little too late for Chris Wilder's play-off chasers.

Just a few games ago our calculations were more about whether or not Barnsley would become a record breaking low points scoring Championship side, much has changed as they've quickly jumped up two places. Given Barnsley's low starting point it might take another quick trio of victories for us to be talking about a run of a similar impact to those produced by Hull and Cardiff earlier in the season, but the picture has changed for the better at least up at Oakwell. 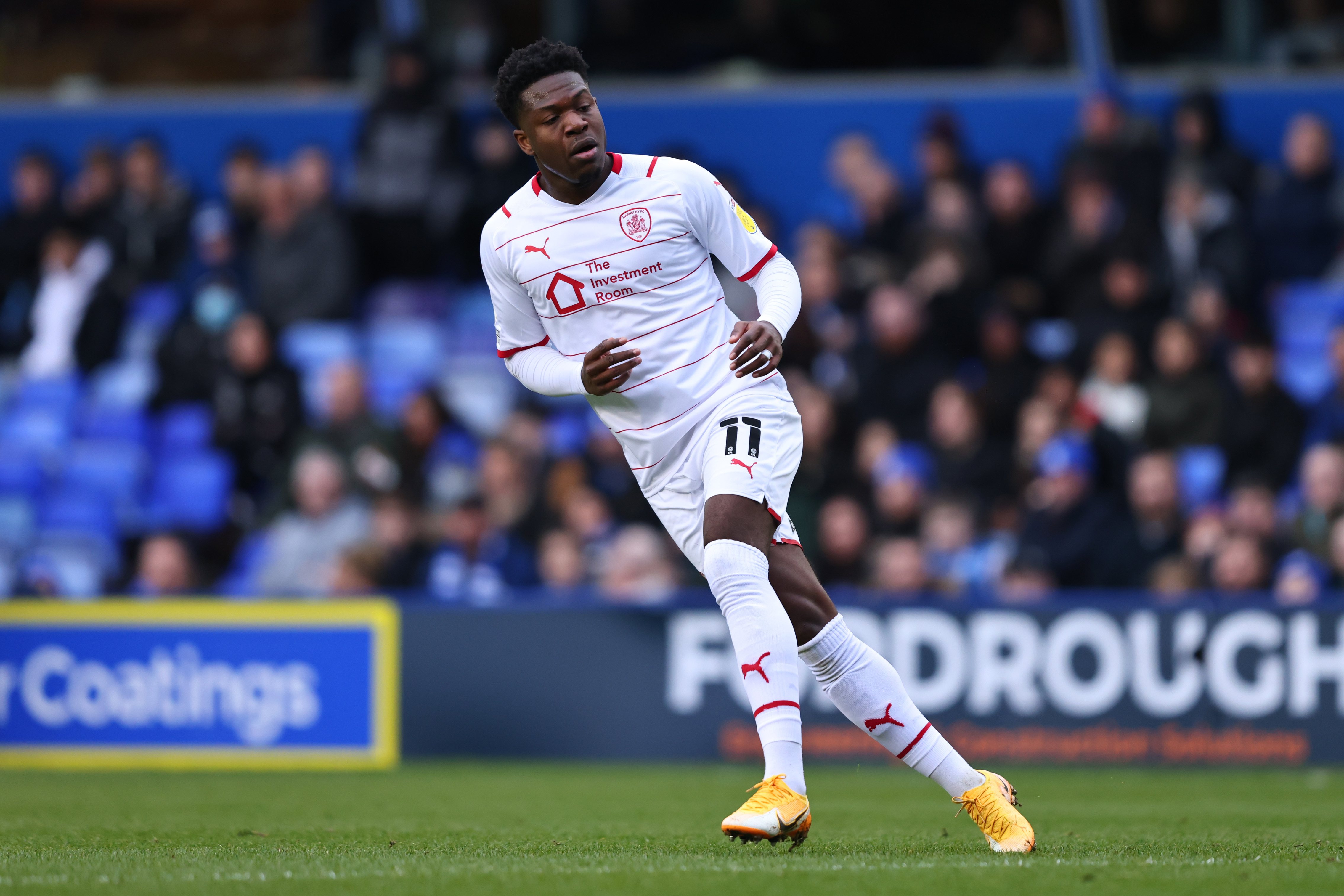 We're in 'they must hate the sight of him' when it comes to Jake Cooper and Sheffield United, with the Millwall man not disappointing again. Cooper headed the only goal in the clash of two in form teams at the Den this past weekend, in the process firing Millwall to a fourth straight victory and up to 11th in the table. For Sheffield United the furious pace of the play-off chase and the fine margins they're dealing with following their poor start to season means they drop out of the top six for now.

Cooper's history against Sheffield United is one of those strange quirks of players seeming to always score against a certain opponent. Of course the skyscraper Millwall centre-half has always been a big threat from attacking set plays, but he seems to save his best for the Blades. Cooper was on target in the first meeting between the two sides this season, notching a 92nd minute winner at Bramall Lane in September. Back in 2019 he scored even later up in Sheffield as the promotion chasing Blades were held to a draw by Millwall courtesy of Cooper's 95th minute equaliser. Millwall lost the game at the Den that season 3-2 but Cooper was on target as usual in the second half, and in 2017/18 guess who scored to put Millwall 3-1 up in their home win against the Blades.

Along with wideman Jed Wallace, Cooper has always been one of the Millwall players linked with a move away from the Den when the Lions have been doing well. Perhaps Sheffield United should put together a bid for Cooper just to stop him scoring against them. 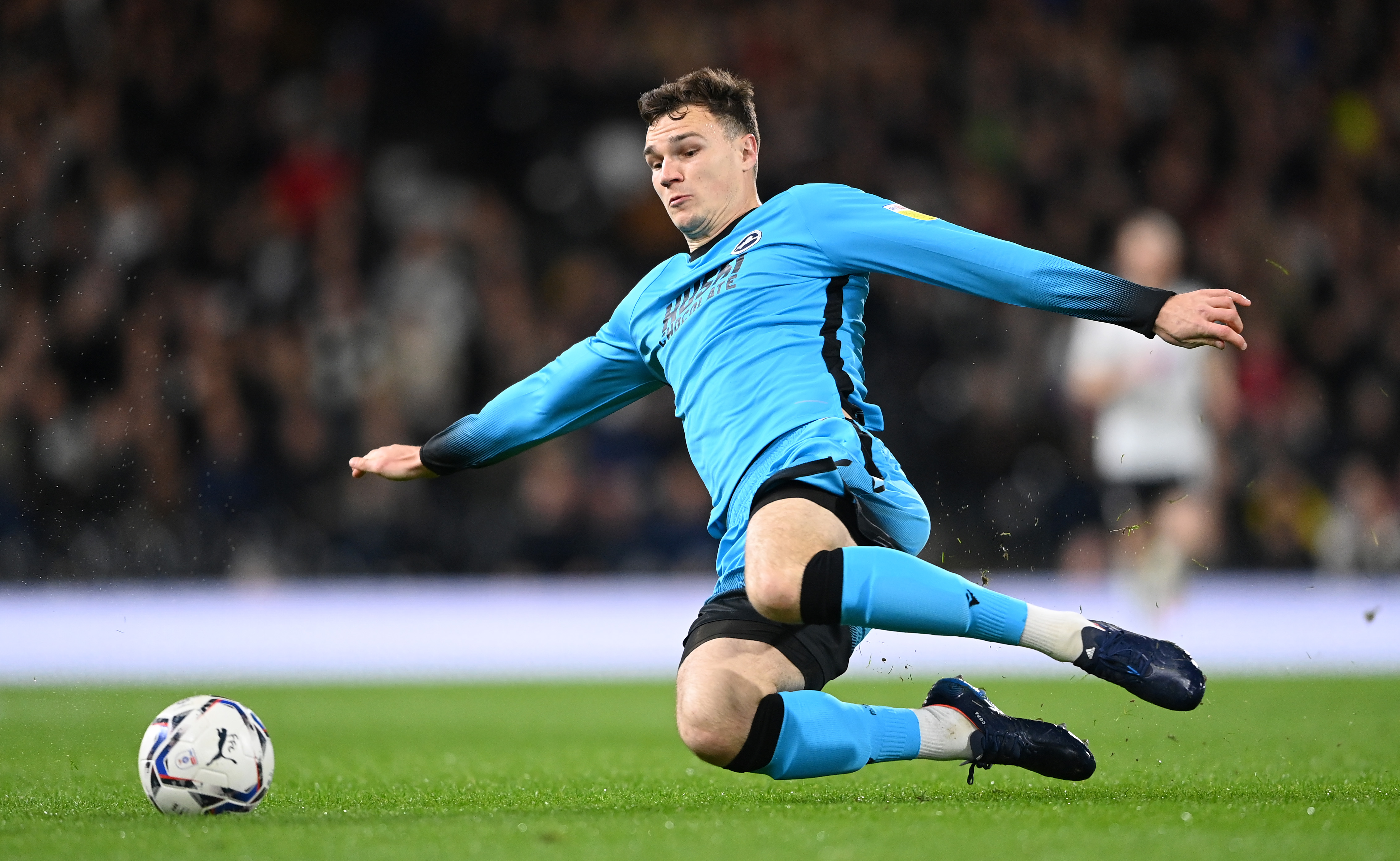 We've had plenty of late shenanigans at the CBS this season, with Coventry becoming a bit of a master at winning games or rescuing points with the final whistles extremely imminent. On opening day Nottingham Forest were beaten with a 96th minute winner and still in August, Reading went under to a 98th minute Matt Godden goal. Godden was at it again in November when his 92nd minute winner defeated Bristol City and just one week prior to this latest late show, Dom Hyam hit a 93rd minute winner to defeat Barnsley.

This week it was an equalising goal in the dying embers of a Championship game for the Coventry supporters to cheer, with a crazy and controversial end to the game adding to the drama. First Preston defender committed a silly foul for someone already on a yellow card over on the touchline and got himself a second yellow card. You'd think that would've made Coventry favourites, but within two minutes Coventry's Fantaky Dabo was also headed for the dressing rooms after a denial of an obvious goalscoring opportunity. Worse still Preston were presented with an 89th minute penalty that Daniel Johnson slotted home to surely win the game for Preston.

This is the CBS however and Coventry just don't lay down that easily. In the 98th minute Fabio Tavares kept his composure brilliantly to curl in yet another dramatic late goal to equalise and save Coventry from defeat. There was bad feeling post game with Preston boss Ryan Lowe suggesting Coventry's goal was a result of time added due to fans invading the pitch, while Mark Robins denied this was the case but blasted those who'd entered the field of play. Six more home games for Coventry, how many more late goals? 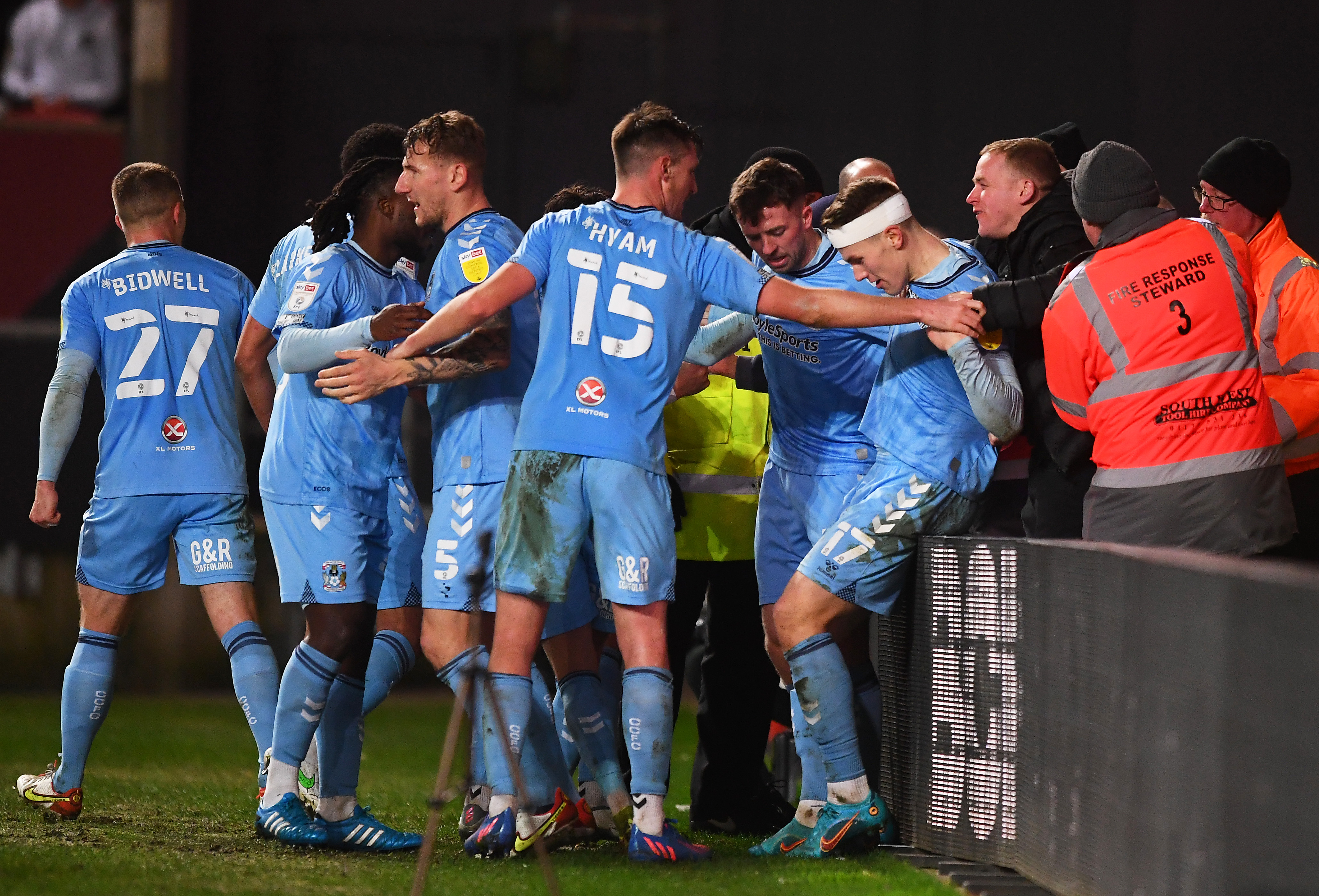 I probably owe Cyrus Christie an apology. When he arrived at Swansea on loan from Fulham it looked like a bit of a downgrade on the outgoing Ethan Laird, who became one of Bournemouth's many January arrivals. Laird was all young and exciting, joining on loan from giants Manchester United and really helping Russ Martin execute his game plan in his early days in Wales. Laird had been on loan with Martin at MK Dons the previous season and knew exactly what his manager required in terms of the wing-back position.

Christie on the other hand had developed a bit of a reputation as a Championship merry go round player. The right back had been a perennial top six level player in the second tier with Derby and Middlesbrough and was finally promoted to the Premier League not long after joining Fulham in 2018. As with a lot of Fulham players in the recent seasons bouncing between Championship and Premier League, Christie was discarded at the top level but kept on the books and loaned out. In 2020/21 he spent the season at Forest and this season he'll be at Swansea for the second half of the campaign.

Far from being a predictable Championship merry go round signing, Christie has been really decent for Swansea and registered his third goal contribution already for the Swan in their win at West Brom. With Christie doing well at Swansea and Laird playing just 17 minutes so far four Bournemouth, perhaps I need to eat a little humble pie when it comes to my assessment of the Swansea right side dealings back in January. 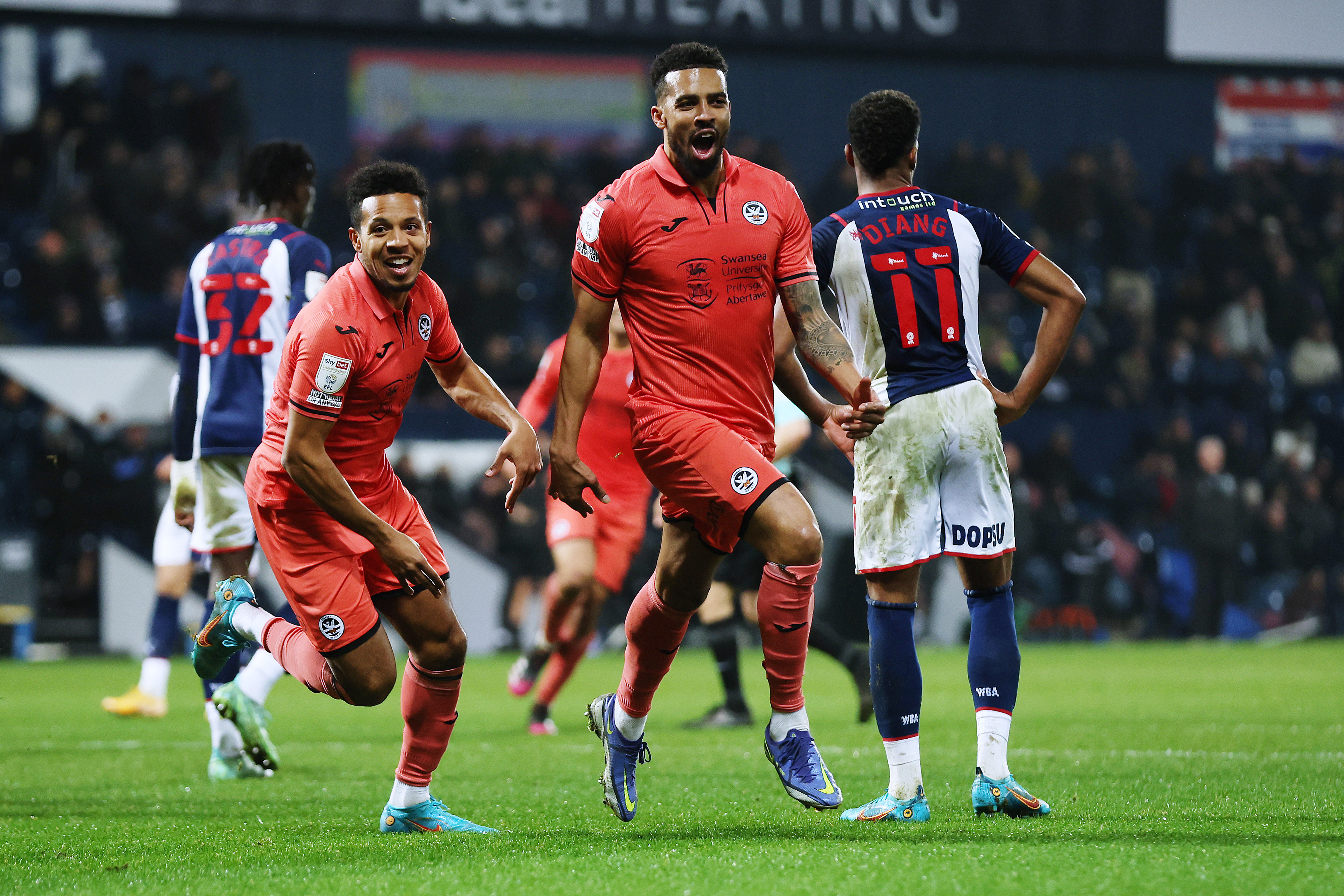