For two of the four teams in the Championship play-offs, the season-long journey will come to an end this Saturday. Both games are tantalisingly set up with a one goal lead held by Bournemouth over Brentford, and by Swansea over Barnsley. Here is a preview of each semi-final second leg.

Up first in Saturday's day long EFL play-off extravaganza will be Brentford's attempt to come back from a one goal deficit against Bournemouth. This is the third placed vs sixth placed semi-final, the game that causes the most anxiety for play-off sceptics, but the one that tends to create the most drama and entertainment for play-off fans.

Brentford take up the mantle of the third placed side. The fact they finished ten points ahead of opponents Bournemouth in the regular season makes them favourites for some, the fact they are a goal behind going into the game makes them outsiders for others. Last season, like this one, Brentford finished third, and also were a goal behind after the first leg of their play-off semi to Swansea. The fact they overpowered the Swans in the second leg will be an omen Bees fans will hold on to, the fact they went on to lose the final one they'll want to dismiss.

The first leg was a tight affair settled by fine margins. Phillip Billing missed a good chance early on, Dominic Solanke hit the outside of the post, and Tarique Fosu-Henry had a reasonable penalty claim turned down during a goalless first half. Then in the second half Brentford blinked first. Pontus Jansson was caught high up the pitch, possession turned over, and Arnaut Danjuma finished off the counter attack for the only goal of the game. Brentford did create a huge chance to equalise, and however many times I watch it back, I'm still unable to fathom how Bryan Mbuemo missed a genuine open goal. 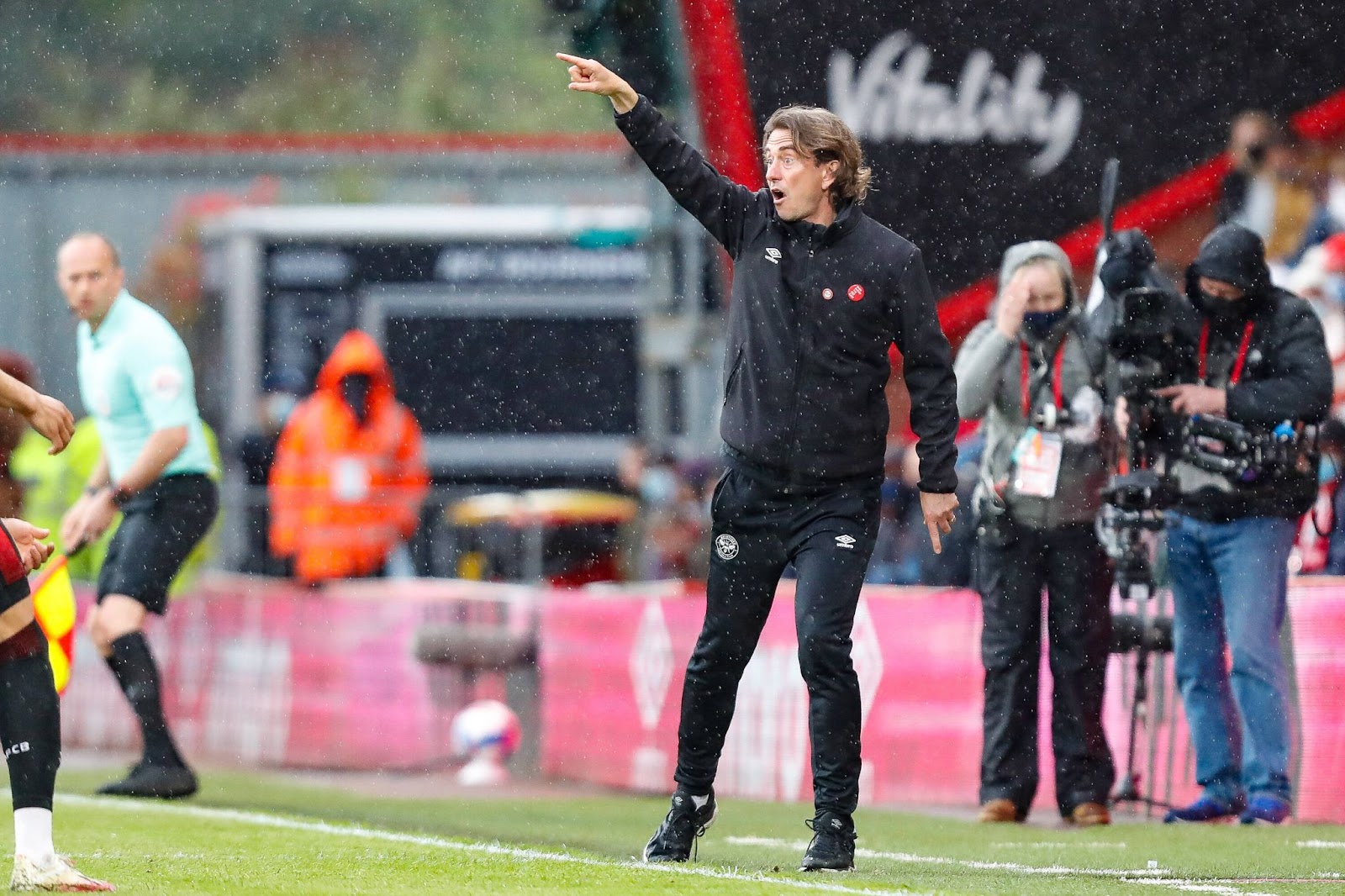 On to the second leg and both sides will need to answer questions. Bournemouth's issues are primarily fitness related, with Steve Cook and Ben Pearson both stepping out of the first leg with knee and hip problems respectively. If both players are fit, then I'm sure boss Jonathan Woodgate would be happy enough to name an unchanged side, if not then reinforcements will need to come in. Chris Mepham came on to fill Cook's spot at centre back, and he'll be required to go toe to toe with Championship top scorer Ivan Toney. In central midfield, Jack WIlshire came on to fill Pearson's role for the final part of the first leg. Wilshire clearly has a high calibre reputation, but would he be fit enough to play 90 or even 120 minutes of play-off football?

Brentford's issues combine fitness and tactical conundrums. The first leg saw the return from injury of both of the Bees first choice full-backs, Rico Henry and Henrik Dalsgaard. In the duo's absence, Brentford had switched to a 3-5-2 shape, but revealingly finished the first leg in their more familiar 4-3-3 configuration. If Dalsgaard and Henry can start, then boss Thomas Frank may be tempted to revert to the system that saw them top the table back in February. Christian Norgaard could move back into midfield, Bryan Mbuemo back into the starting eleven as an inside forward, and Sergi Canos freed from his unfamiliar wing back role. The likely victims would be striker Marcus Forss and attacking midfielder Fosu-Henry, who would be vying with others to get a spot in a front three.

Only those inside both clubs will know the real truth regarding the fitness issues and all will be revealed an hour from kick off on Saturday. What is for certain is that Brentford have to win in 90 minutes to even have the possibility of extra time, which sets us up for an intriguing matchup to kick off play-off showdown Saturday.

The first leg of this semi-final at Oakwell on Monday did much to advance a couple of stable Championship theories. Namely, Swansea tend to turn to Andre Ayew in the big moments, and Steve Cooper has Valerian Ismael's number this season. The first of these theories is fairly easy to argue, especially after a moment of quality from Ayew provided Swansea with the only goal and a first leg lead. The Ghanain forward player has consistently delivered for the Swans, and will hope that continues over what remains of this knockout series. Regarding Cooper v Ismael, the evidence is stacking up. This was a third victory this season for Swansea over Barnsley, and where many have struggled against the Tykes, Steve Cooper has consistently had the answers.

So how do you stop Barnsley? Well Cooper and Swansea played the pragmatic tournament game perfectly on Monday. Don't take any unnecessary risks, ride your luck when you need to, and take your chances when they come. In terms of taking your chances, Andre Ayew saw to that for the Swans, with a lovely curling left footed finish. When it comes to riding your luck, the big chance for Barnsley fell to right wing-back Callum Brittain, and his finish wasn't nearly decisive enough to beat the excellent Freddie Woodman in goal. And unnecessary risks? Cooper addressed that before the game kicked off, preferring the more defensive option of Kyle Naughton at right back, and the more mobile option at centre back in Ben Cabango. A clean sheet was the reward, and Swansea made no bones about clearing their lines when the fabled Barnsley press swarmed their back four. 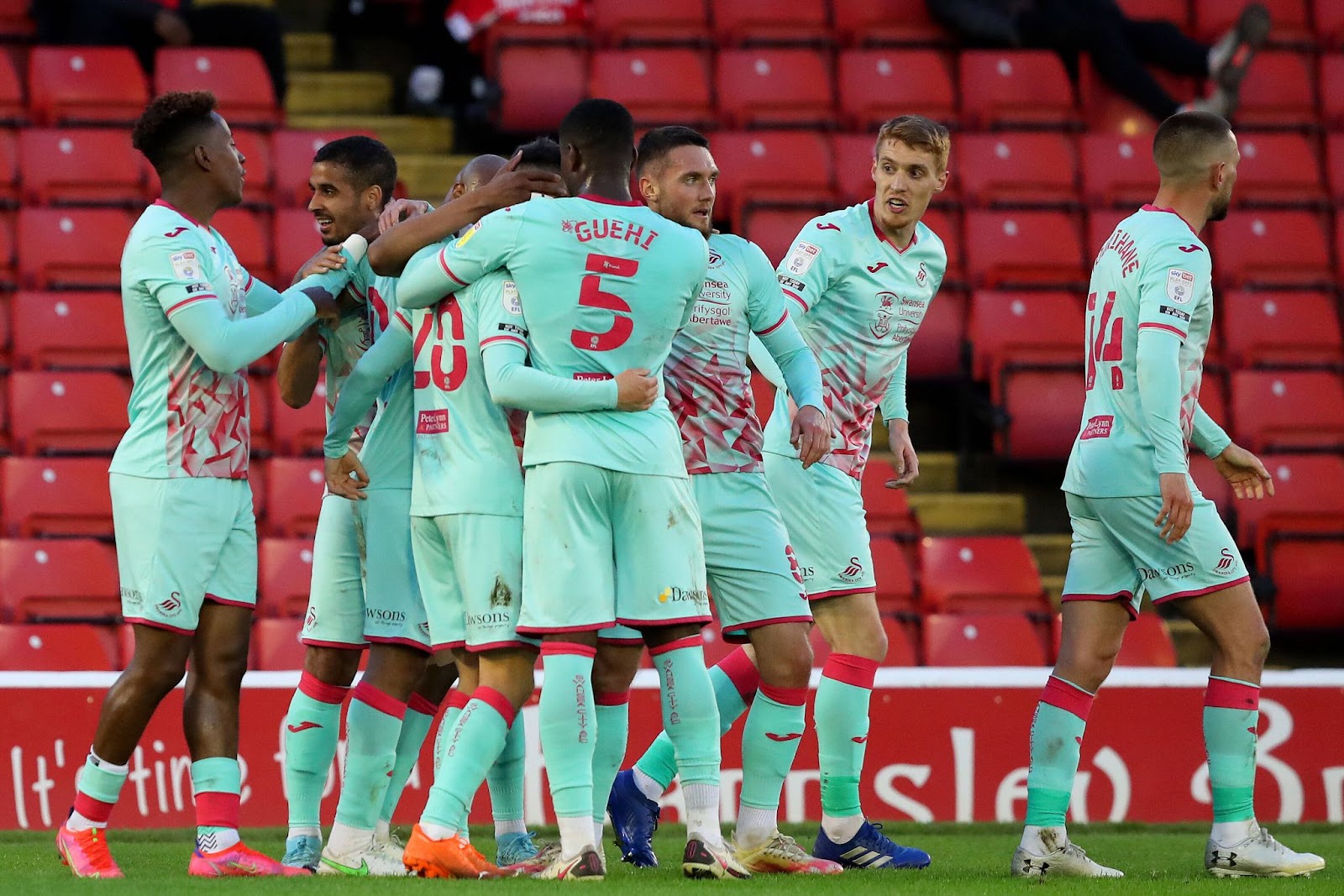 Now the paradigm changes, and the question becomes how do Barnsley get past Swansea? Well, if the lessons we've learned from watching Barnsley this season are anything to go by, then we probably already know the answer. Barnsley and Ismael have been the model of consistency in performance, and selection. The system is always 3-4-3. Helik is always the anchor, Mowatt & Palmer centrally between wing-backs Styles & Brittain. The pressing is formidable, three forwards backed up by the two wing-backs and a defensive line high enough to tweak the nerves of even the most confident watcher. Would Ismael be so bold as to switch from his favoured style? I wouldn't have thought so, and I suspect he falls into the 'If plan A doesn't work, work harder on plan A' type of boss.

In the other dugout Cooper is heralded for tournament football success with England under 17s. With a one goal lead the message may well focus on the fact a clean sheet guarantees safe passage through to the final. Cooper could bring Conor Roberts back into the eleven in place of forward Liam Cullen and revert back to the 3-5-2 shape that worked wonders for much of the season. But then again he could stick with a winning team and focus on continuity with the behemoth of the play-off final and the Premier League so close. Whatever Cooper does, don't expect that to be the end of the chess match between the two bosses, with a fierce tactical battle in store on Saturday night.