On Sunday evening, Bayern Munich meet Paris Saint-Germain in a Champions League final that should see entertaining football from both sides. Not only is this a meeting of true champions – Bayern recently won the German Bundesliga, while PSG won France's Ligue 1 – but it represents a coming together of attack-minded teams with world class talent in forward areas.

Here, we at Tribal Football preview the game from a tactical perspective.

Paris Saint-Germain's Champions League quarter-final win over Atalanta resembled a Neymar YouTube highlight reel. The Brazilian wasn't just their primary source of attacking progression – he was all but their only source. He dribbled 15 times in that game, according to WhoScored data – for context, the teammate closest to him in this aspect was Juan Bernat with three.

Fortunately for Thomas Tuchel's side, their attacking play looked a lot more cohesive in the semi-final thrashing of RB Leipzig. With Kylian Mbappe and Angel Di Maria restored to the front three and Leandro Paredes starting in midfield, they were able to open up their opponents on numerous occasions.

Paredes had an interesting role in the semi-final, often dropping into the left-back area when PSG looked to build out from the back. From this position he could get his foot on the ball, look up and break the lines with passes to the front three, particularly Neymar. 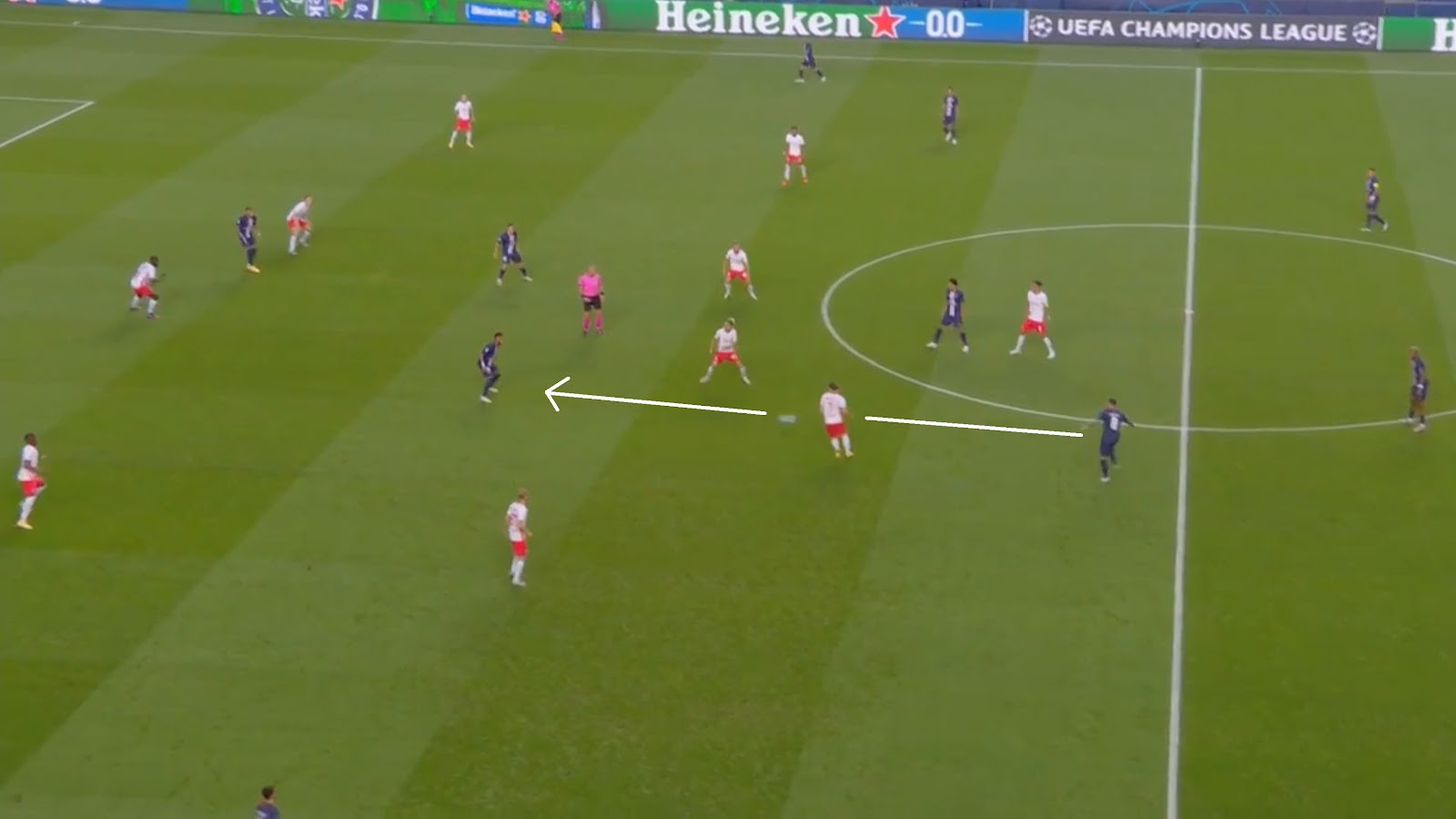 Small spaces become large gaps when Neymar is involved. He can kill the ball dead upon receiving, turns sharply, and dribbles at speed without losing control. Stopping him when he receives between the lines like above is almost impossible. He is arguably the finest dribbler in the world – if he doesn't beat his defender cleanly, he generally draws a foul.

Bayern's most important task, therefore, will be to stop Paredes from finding Neymar so easily in these situations. One way to do this is through an aggressive back line that looks to squeeze the space between defence and midfield. Another way is to press with greater intensity and numbers than Leipzig did, with Thomas Muller and Serge Gnabry stepping up to support Robert Lewandowski. 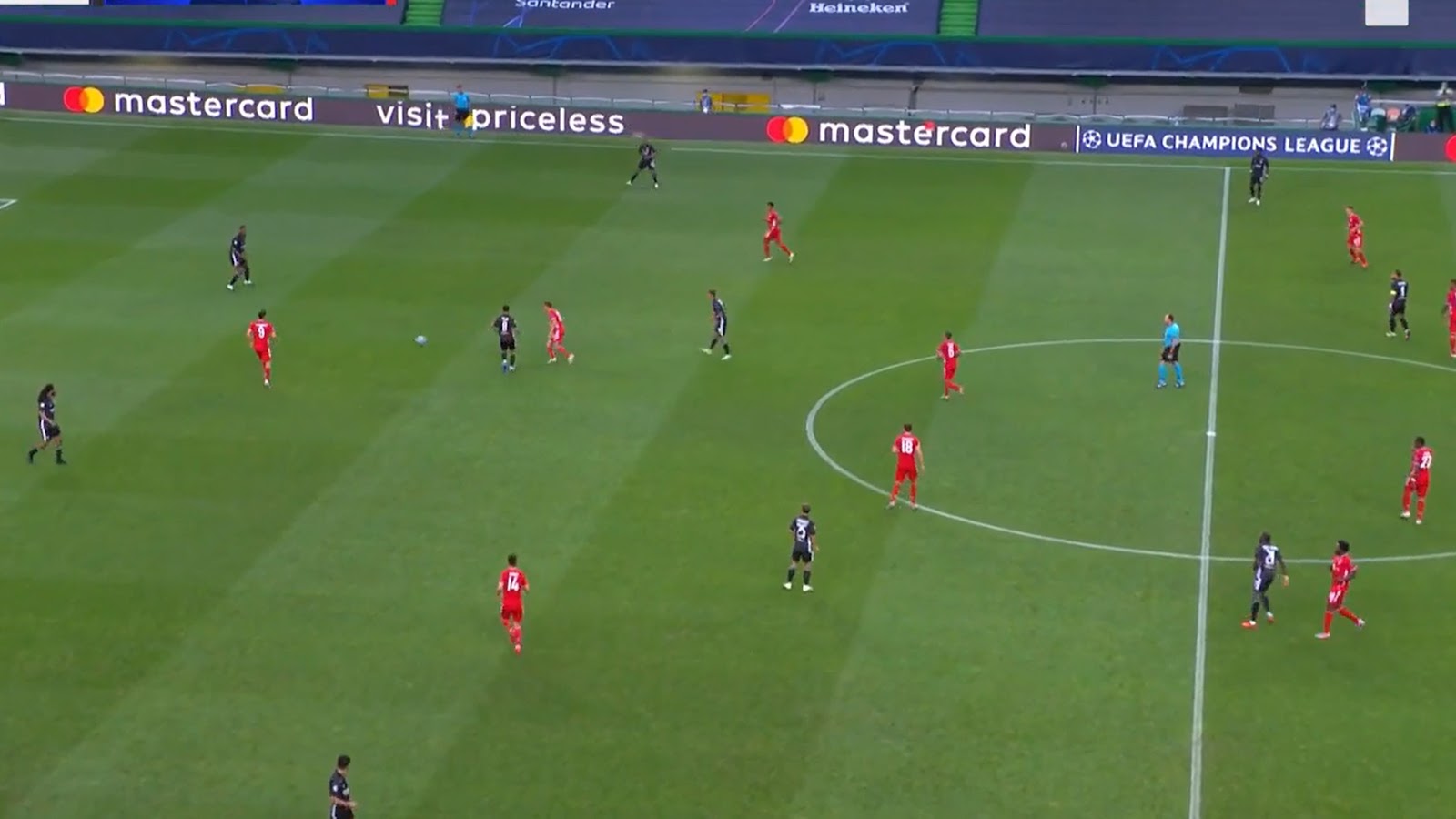 By committing more to the high press, Bayern may be able to rush Paredes. But that doesn't necessarily mean Neymar won't get on the ball. PSG's left centre-back Presnel Kimpembe is equally capable of picking passes through the lines and could take over this responsibility if his Argentine midfield teammate is taken out of the game.

Without question, Bayern will be more worried about PSG's left side than their right. With Paredes dropping to get on the ball, Bernat overlapping into space on the wing and Neymar coming in to find pockets, it can be difficult deciding what to prioritise defensively – cutting out Paredes passes, controlling Bernat's runs, or converging around Neymar. Another element to add in is the speed and movement of Mbappe, who always looks to stretch the defence, drag them back and create extra room for Neymar between the lines. 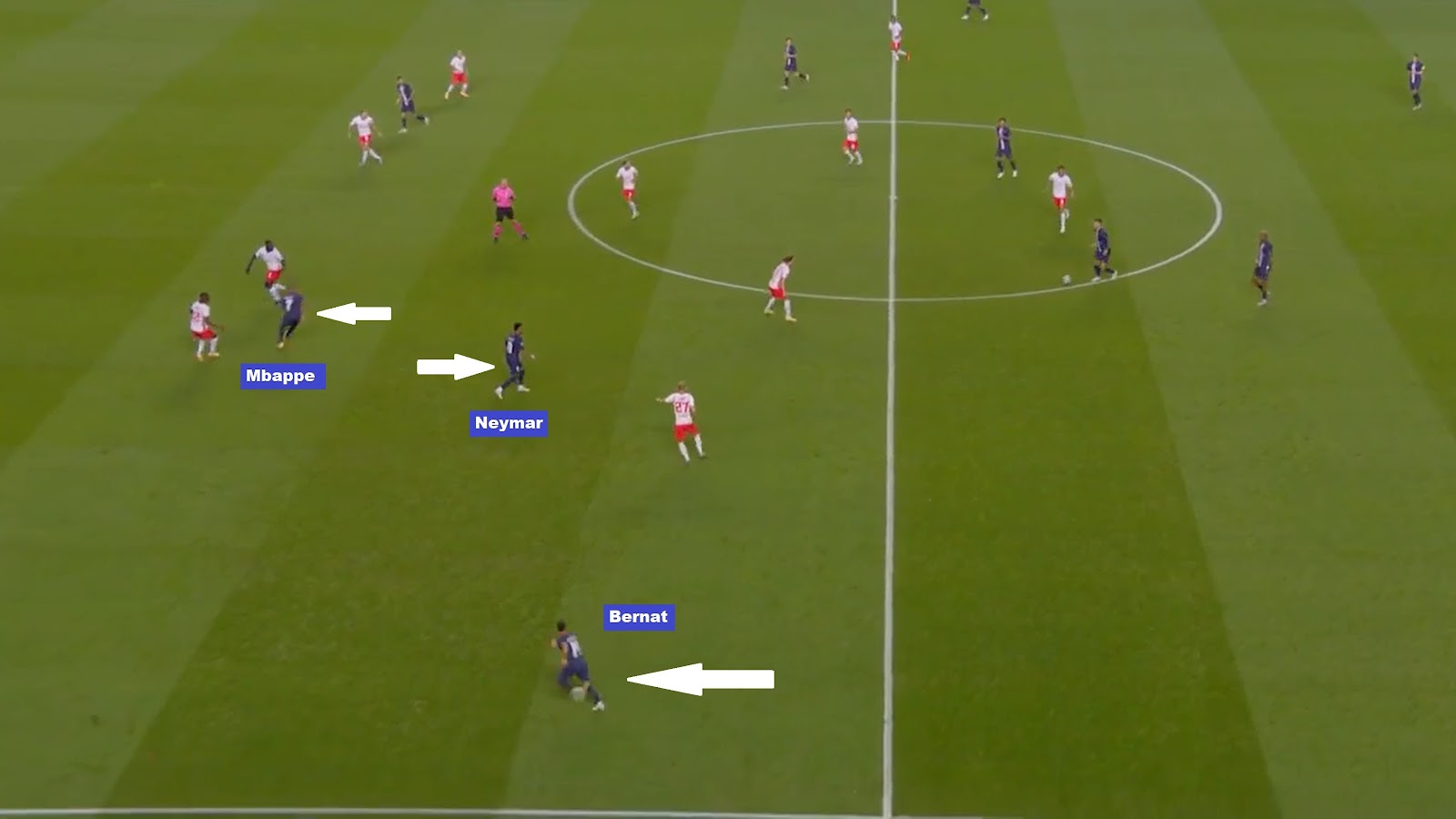 Bayern, of course, will pose problems to PSG's defence too. Both of their centre-backs – Jerome Boateng and David Alaba – are effective ball-players who can penetrate or ping accurate balls over the top for the runs of Gnabry and Ivan Perisic. Thiago Alcantara is an outstanding playmaker who can open up defences, while the Robert Lewandowski-Thomas Muller partnership is extremely difficult to keep tabs on as both take it in turns coming short and going long.

Hans-Dieter Flick's side get a lot of players in central positions offensively. As well as Lewandowski and Muller, Perisic makes darting runs inside to get behind and Gnabry likes to dribble infield. And while Thiago tends to sit deep and dictate possession, Leon Goretzka makes forward runs to support the attack.

With so many players in and around the centre, the opposition can narrow in and leave space outside. This means Bayern's full-backs can get isolated 1v1 on the flanks, which is where left-back Alphonso Davies causes serious damage. 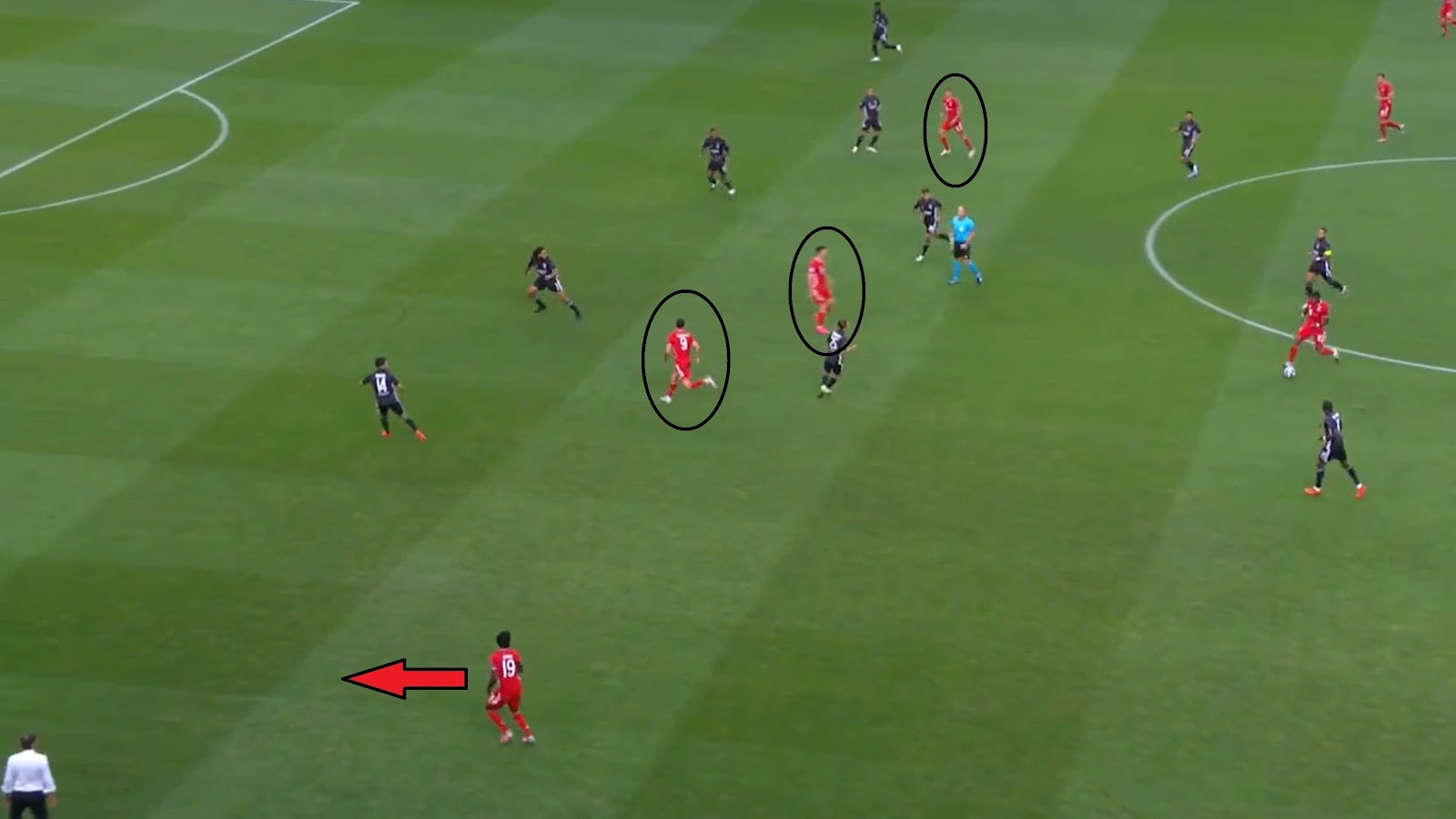 The Canadian is a skilled dribbler with an exceptional turn of pace to get away from defenders, create space for himself to continue driving at goal or to play a cross into the box. PSG will probably defend in their usual 4-3-3 with a fairly narrow front three this Sunday, so Ander Herrera on the right side of midfield may have to help right-back Thilo Kehrer out, tracking back to prevent Davies getting the 1v1 situations he thrives in.

Perhaps the deciding factor in a game between two superb attacking teams will be how their defences hold up. This may be where PSG gain an edge over Bayern, whose back line has looked extremely shaky in both of their last two knockout ties.

Flick likes his back four to push up and squeeze space between the lines, but this leaves plenty of space behind. They have a lot of pace, which helps them get back and defend on balls over the top. Nonetheless, the aggression of the back line leads to a lot of 1v1s and last-minute defending, which isn't where the likes of Boateng and Davies are at their best.

In their 8-2 defeat to Bayern in the quarter-finals, Barcelona gave goals away through their own slow build-up and poor decision-making. However, they created many chances mainly by exploiting Bayern's back line through the overlaps of their full-backs to get in around the outside, or with balls behind for Luis Suarez to attack. Lyon did something similar in their semi-final against Bayern, with quick counters focused around runs behind by their front two. 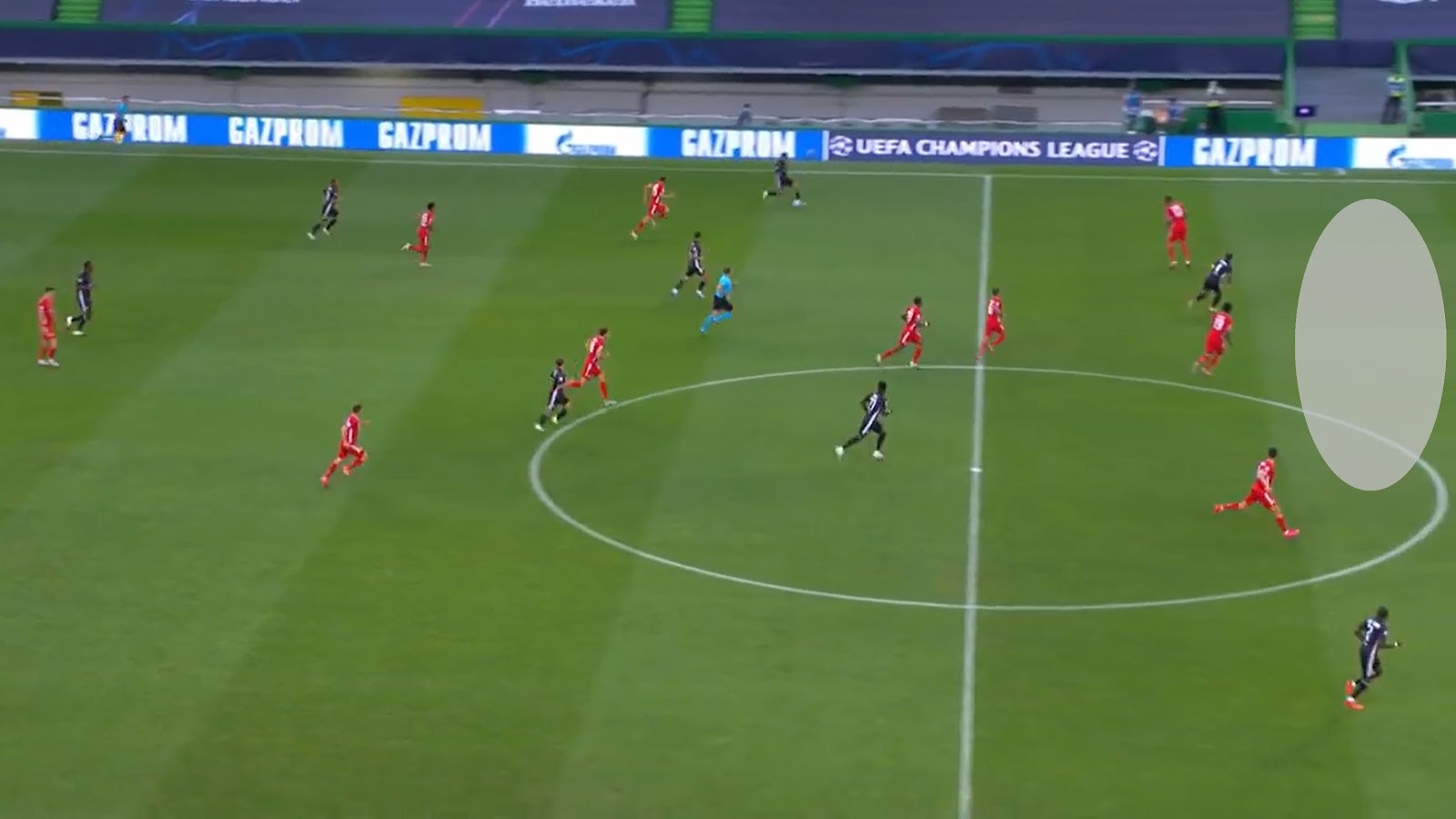 Transitions may be where PSG look to target this weakness of Bayern's specifically. With the pace of Mbappe and Neymar, they can exploit the German champions' aggressive defensive line and create chances just like Barcelona and Lyon did, only without the terrible build-up play that de-railed the former and the inefficient finishing that punished the latter.