Cavani & this Man Utd contract: Why if it happens... Ole can take a bow

COMMENT: Edinson Cavani and this contract. If it happens it'll be a triumph. For Ole Gunnar Solskjaer. For the dressing room. And for the culture developing inside Manchester United. But be warned, nothing regarding this deal is locked away just yet...

The big news; the exciting news for United fans is that Cavani has agreed to stay. Indeed, not only that, he's agreed to a two-year contract extension, running through to 2023. That is, according to media sources out of Argentina.

United fans will need to be wary. News of this breakthrough was more of a suggestion... a prediction. But included in that prediction was a claim that all will be revealed in the coming days. And given Boca Juniors' very public pursuit of Cavani, you do fancy word has reached the TNT studios in Buenos Aries that the veteran has told the Argentine giants of his decision.

So glass half full and Solskjaer will be delighted. The United manager has made it no secret of his wish to keep Cavani around next season. And it must be said, he wasn't sounding particularly optimistic just a week ago: "He's not told me he wants to leave but I am very aware he might be going back home to South America. If that's his decision, I will understand that."

A natural wanderer and explorer. Cavani hasn't enjoyed life away from the club. Locked away at his home in Cheshire. Unjustly banned for a social media post. Attacked by some fellow pros (or is that just one gob-shizen?) in their clickbait pundit's role. You could understand Cavani wanting to get away from the country as soon as he could.

But then came Roma and that two-goal display. The goals were important, but it was the performance - and the way he reveled in it - that you fancy tipped Cavani's thinking in United's favour on Friday morning. He was the focal point. The main man - and in a European semifinal. Solskjaer built his gameplan around United's No7 and Cavani thrived. Two goals. Two assists. And a penalty won. It was outstanding. Cavani was outstanding. And it was an experience he knows he won't get should he leave for Argentina at the end of this season. 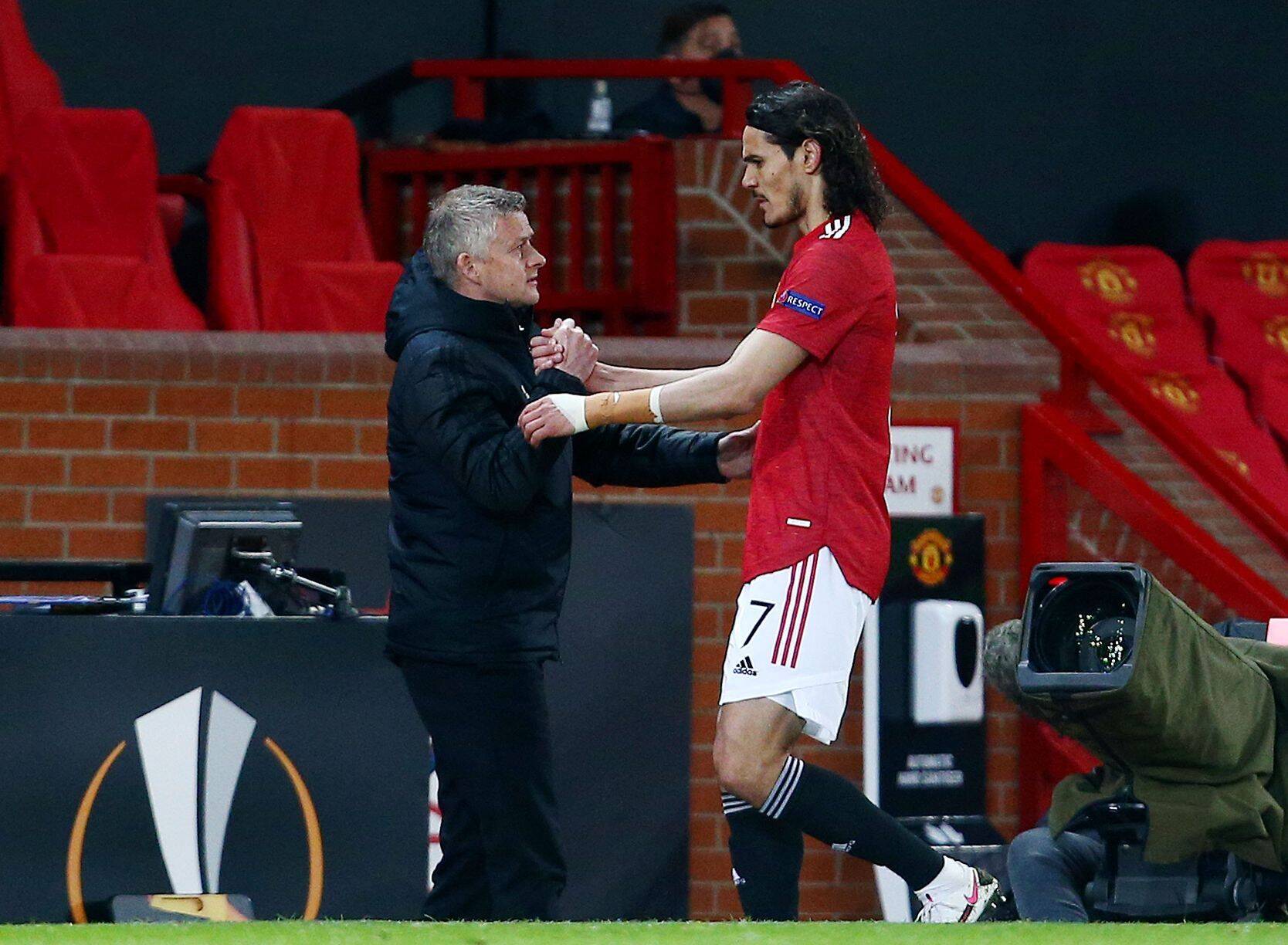 'Imagine doing that in front of a full house, Edi...'

The way United played. The influence Cavani had on the performance. It couldn't have worked out better for Solskjaer. You can just imagine what he said to the centre-forward in the home dressing room, 'Just imagine playing like that in front of a full house...' In terms of Cavani's contract, the manager's gameplan could not have received a better boost.

The Norwegian has been open about his approach in trying to convince his centre-forward to stay. The chance to score at a full Stretford End. To experience the atmosphere of a sold out Old Trafford - and as the team's leading striker. If Cavani is persuaded to put pen to paper this week, the collapse of Roma on Thursday night will have made a healthy contribution.

United need Cavani. None of the options available to Solskjaer could produce a performance as he did on Thursday. Marcus Rashford isn't spraying a 30-yard pass with the outside of his boot for Mason Greenwood to score. Anthony Martial isn't attacking the near post to win a penalty from a clumsy Chris Smalling. And Greenwood isn't finding the right weight with a lay-off for Bruno Fernandes to find the back of the net. They can score, sure. But none of United's other three strikers possess the overall game of Cavani. It's the Uruguayan who brings it altogether.

And that influence can also be seen on the whiteboard inside Solskjaer's Carrington office. Convincing Cavani to stay for another season - or two - will be a relief for the manager. One less position he needs to be concerned about. One less outlay he can instead put towards other weaknesses in that squad he has up on his office wall. Knowing he can 'park' the need for a new centre-forward for another window will please Solskjaer, with a new centre-half, right-back and that much-needed winger signing all still priorities if they're to hunt down Manchester City next season.

That's not to say Cavani will last these next two years. At 34, he will need to be managed. But it's a credit to the veteran's career approach that his body has managed to hold up as well as it has this season. Entering the Premier League at Cavani's age is one thing, but to do so in the most physically demanding season the competition has seen - and to be playing as he is - is further proof of how exceptional a pro he is.

A shame he couldn't find his way to Old Trafford earlier? Yes. But that regret on the club's side will also be a motivation for Cavani. He's no second or third fiddle at United. There's no Neymar, Kylian Mbappe or Zlatan Ibrahimovic he's having to yield to. On the pitch, Cavani is as good a player and as big an influence United has. Fully fit. Fully in sync with those around him. Cavani can produce a performance as he did against Roma.

"You can see the difference in him," declared Solskjaer, "he's worked up his fitness having had a long lay-off. He's making up for lost time."

Making the most of a move he should've made years ago. Playing a key role in the revival of a fallen giant. And with the promise of doing it all with a full Old Trafford at his back every other week. The selling points his manager has made are clear and obvious - and with news out of Buenos Aires - enough to convince Cavani to stay.

It's not locked away yet, but if Cavani does put pen to paper on a new contract, it's another great triumph for his United manager.