COMMENT: Touchy? Testy...? Even precious? Is this what describes Mohamed Salah and his complaints about being overlooked for the Liverpool captaincy earlier this month? Or could it be the Egyptian, in his own modest way, has let it be known he's fed-up being taken for granted...?

Some called it strategic. Others indulgent. But whatever the motivations for Salah's interview with AS last week, there was a warning amongst this no-holds-barred Q&A. The nod to Real Madrid and Barcelona sparked the first round of headlines. But it was his honest response to the captaincy snub which should have alarm bells ringing at Anfield.

"Honestly, I was very disappointed," declared Salah when asked about Trent Alexander-Arnold being given the captain's armband ahead of him for the Champions League dead rubber against FC Midtjylland. For many observers, even ex-players, wearing the armband for less than 90 minutes in such a nothing game wouldn't be worth the fuss. But not for Salah. For him, these things matter. Another landmark moment in a career. Another record etched into LFC's history books. It's what drives him. And against the Danes, for everything he has done for the club, he felt that it warranted a reward from his manager.

"I was hoping to be the captain, but it's a coach's (Jurgen Klopp) decision. I accept it."

And that's just it, Salah has been "accepting" things since he arrived three years ago from Roma. The captaincy blank only the latest slight he's had to put up with. The accusations of being "selfish" have long followed him - and this hasn't only come from outsiders. Emile Heskey, Graeme Souness and Jamie Carragher have all slapped the Egyptian with the label, Carragher going as far as to claim the striker is "greedy" in his hunt for goals.

But it goes further. Those stories about Salah being irked about all the fuss around Virgil van Dijk and his quest for the Ballon d'Or do have some credence. Like the rest of the Reds locker room, Salah is happy for his teammate and the recognition he receives. And if he can help the Dutchman find a path to winning the top individual award in the game, Salah won't think twice. But on the flipside, as he has let slip to his closest confidants, why doesn't anyone come out in support of his case? Whether that be Jurgen Klopp. Teammates. Ex-players. Or even the local rag. There's never been a campaign for Salah to be recognised amongst his peers and journalists when it comes to the end of season Player of the Year gongs - not the least when compared to what's been drummed up for Van Dijk.

For this column, the limited appreciation shown for Salah's achievements simply don't square away. At 28 and now in his prime years, Salah already boasts two Premier League Golden Boots. That's before considering his Prem, Champions League, Super Cup and Club World Cup winner's medals. He's also the first LFC player to hit the 20-goal league mark for three consecutive seasons since Michael Owen at the turn of the century. 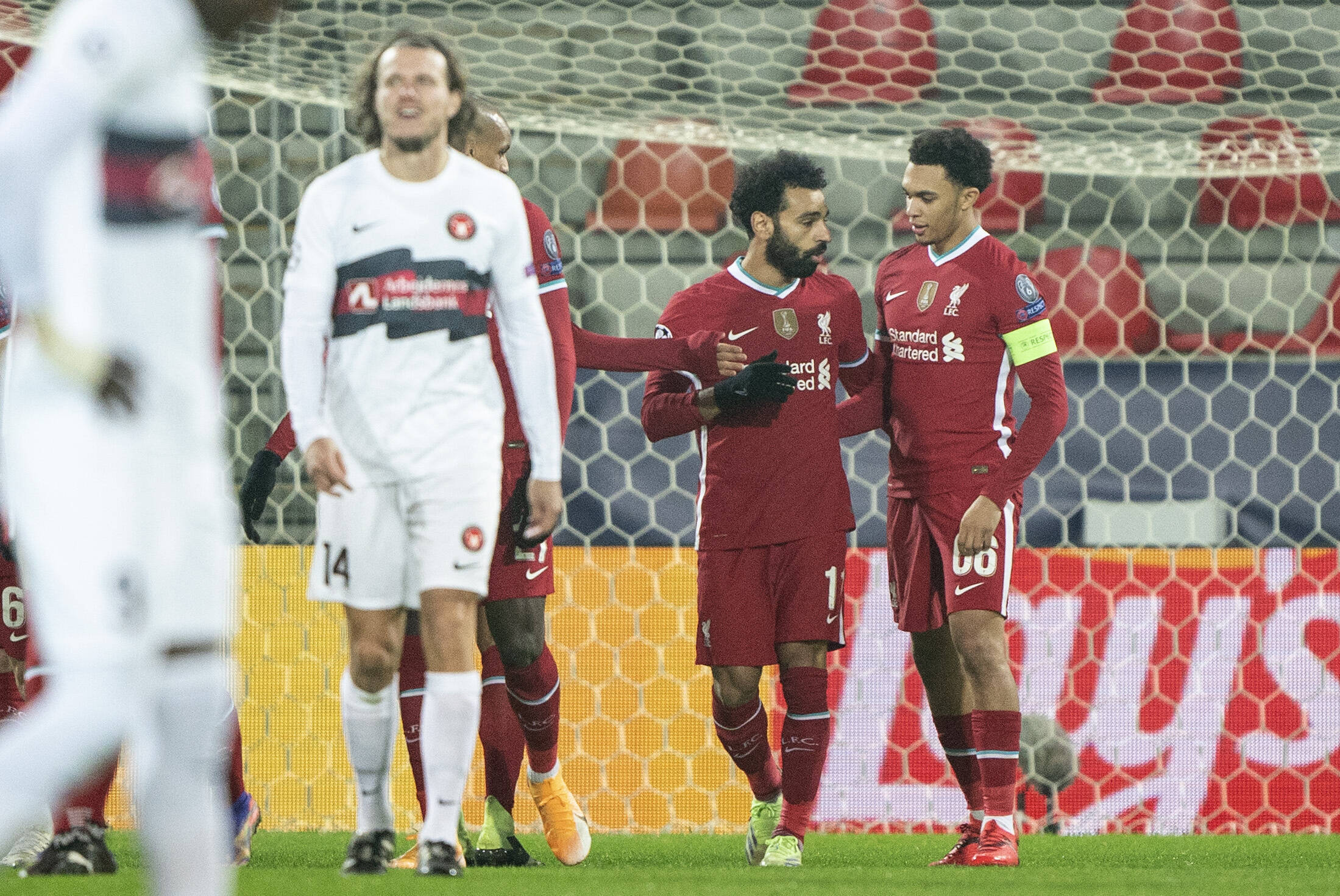 Salah chats with his skipper Alexander-Arnold against Midtjylland

LFC fans are witnessing history in front of them. Salah is a Rush, Keegan or Dalglish. He belongs in that bracket of player. In that chapter of folklore. But you don't have to pull out old VHS tapes to relive just how good he was. He's doing it all now in today's LFC team.

There's no Champions League title without Salah. And for the ease with which they won last season's Premier League, it can be argued without Salah that 30-year drought would remain unbroken. Take the Egyptian out of Klopp's team and Liverpool are a very, very different proposition.

Van Dijk is an outstanding player. But he isn't the best in the world. He's not even the best defender. Salah's great nemesis, Sergio Ramos, deserves that title. All things being equal, put Van Dijk and Salah up for sale and it'll be the latter who attracts more offers and would go for the higher fee.

Indeed today, you'd take Salah over Antoine Griezmann, the Barcelona striker, after he finished on the Ballon d'Or dais last year. As you would Ramos' Real Madrid teammate Luka Modric, now a past winner of the title. Salah, for everything he's done these past two years, should be a step ahead of both players.

Yet, he isn't even Liverpool's figurehead. Their flag, as they say in Italy. But he wants to be. Salah wants that recognition. It came through loud and clear in last week's interview. The records. The ambition. These things matter to him. He won't go public with it, that's not his character, but Salah does want the recognition his achievements in a Reds shirt clearly deserve.

"I think I have broken a few records," he says, "I wish I could break all the records for the club, that would be nice."

Gary O'Neil, the former Portsmouth midfielder now on Liverpool's U23 staff, insisted this week that it's business as usual with Salah. No signs of frustration. No indications of him being downbeat. Ever the happy pro.

But would you expect anything less? Again, as much on the pitch, Salah sets an example off it. For the all the accusations of Carragher and co, no-one has ever questioned Salah's work in training. He gives it everything - and has been the ideal example for coaching staff like O'Neil to use with the club's young pros.

On the training pitch or over games, Salah - more than anyother player - has epitomised this Klopp era. High pressing. Hard, high-octane running. Defending from front to back. When you think of today's Liverpool, you think of energy, action - and Mohamed Salah. The progress of Klopp's team isn't where it is today without the influence of his Egyptian striker.

This wasn't a club sanctioned interview. And Klopp learned of it's contents the same time as we did. But there wasn't anything hostile in there. No threats. No ultimatums. Just a nod. A nod to his manager and the club.

Be careful Liverpool, your best player is fed-up being taken for granted.