Benitez & Everton: Why that first signing (with or without Brands) can make the difference

COMMENT: Benitez and Everton. Benitez and Moshiri. Can it work? Well, of course it can work. But he'll need a quick, positive start - and we're not just talking on the pitch...

If Farhad Moshiri wants to ease the pressure on his new manager, the best Everton's majority shareholder can do is deliver Rafa Benitez a first, big name signing. And soon.

Getting that first big name through the door will take the spotlight off the new manager. It'll give the local support something to grab onto. To get excited about. And for those cynical about the former Liverpool manager's arrival, a counter to their arguments against his appointment.

It's been reported in some quarters as a problem. A huge problem. The power struggle over control of transfer policy. Marcel Brands, Everton's sporting director, was missing from the original announcement of Benitez's arrival. The absence of quotes from the Dutchman on that initial media release raising doubts about his support for the appointment. Within hours, we had news of Brands' powers being watered down. That Benitez would now have a bigger say on transfers, in contrast to those who had gone before him during Brands' time at Goodison.

A controversy? Perhaps. We'll have to wait to see how it all how flushes out. But in terms of a PR opportunity, it couldn't have fallen better for Moshiri and Benitez. Again, if that first signing is a big name. An exciting name. The Blues support will know Benitez's fingerprints will have been all over it. Brands may not appreciate taking a backseat, but if a relationship between the new manager and the fanbase is to begin on the right foot, it couldn't go better if it was recognised that it was the presence of Benitez that convinced player 'x' to choose Goodison.

And Moshiri will do it - willingly. In a previous column, we declared this potential partnership as the right manager for the right chairman, but at the wrong club. Now that it's happened. Now that Moshiri has decided the pros far outweigh the cons. He will back Benitez with a transfer budget the Spaniard has not seen in years - and that's including the summer he spent with Real Madrid president Florentino Perez six years ago.

Moshiri, with the Uzbek billionaire Alisher Usmanov somewhere in the background, has never let down his manager. Ronald Koeman, Sam Allardyce, Marco Silva and Carlo Ancelotti. None of them were left short when it came to the transfer market. Time and again, Everton would look to a new season full of verve and optimism, lifted by a big spending summer window - only for it all to peter out. Moshiri held up his end of the bargain, over and over again. But the men he's relied upon in the Everton dugout have never matched his ambitions. 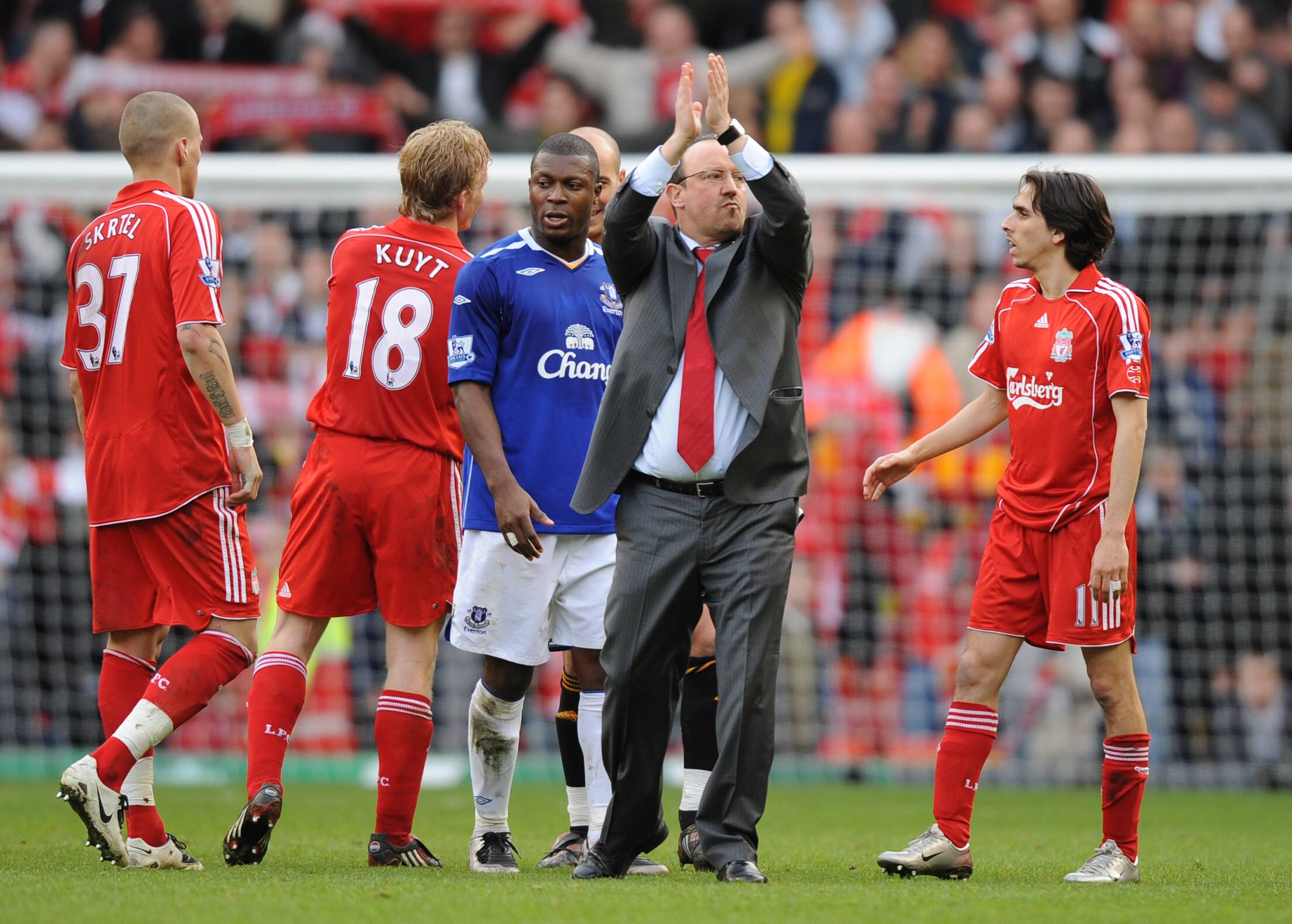 Benitez applauds the Kop after clashing with Everton

Which is why he was so determined to face down the backlash around Benitez. That Roman Abramovich has had an influence on this appointment speaks volumes. Chelsea's billionaire owner recommending Benitez in conversation with Usmanov. The Spaniard had one season at Stamford Bridge. A season of flux. Uncertainty. And of absolute hostility. Yet, he stared it down. From the stands to the dressing room. Benitez, despite so much internally fighting against him, guided Chelsea to a Europa League title and Champions League qualification before Napoli's movie mogul owner Aurelio de Laurentiis gave him the chance to get out of Dodge...

So taking on Everton. Taking on the backlash. From the fans to the exes. It will be nothing new to Benitez. There was no hesitancy. No second thoughts. Benitez lobbied for the job. He ran to it. A big club. A historic club. And a project with a chairman willing to spend. It's what Benitez has been seeking since before his days with Newcastle United. The animosity over his Liverpool ties no different to what he experienced at Chelsea. At least from the stands. Amongst the players, unlike the personality-driven locker room of Chelsea, Benitez won't have to face down any out of control egos. He'll be inheriting a good squad. A young squad. And one whom privately have admitted to underachieving these past two seasons working with Carlo Ancelotti.

Just like Moshiri, the players know they should be doing better. Pound-for-pound, as individuals, this Everton squad is far better than a mid-table finish. They'll embrace the new manager. His methods. His approach. These players, just like the owner, are desperate to connect with a manager who can show them how to produce - and win - consistently.

"Rafa Benitez was the same at Tenerife as he was at Valencia CF, methodical and effective," Curro Torres, the former Valencia fullback, told Tribalfootball.com last season. "He had the real capacity to get the very best out of his players, in many aspects.

"It's perhaps not very nice to experience first-hand being pushed to the very limit as a footballer… by a very demanding manager. However, with hindsight, you realise what a special manager and special person Rafa Benitez was and still is.

"Off the pitch, I saw a lot of humanity in his approach and you learn from those unique qualities too. Without doubt, it was enriching as a player and as a person to have been managed by Rafa Benitez."

But what of the controversy? The power struggle between sporting director and manager? Well, later in the day, Brands issued a statement assuring a willingness to work with Benitez - and in his first interview with the club's media team, the Spaniard offered the same.

Benitez will work with a sporting director - and happily. And if he and Brands click, it could be spectacular. For confirmation, You need only listen to Javier Subirats, Valencia's former sporting chief, who won two LaLiga titles with Benitez.

Subirats, again speaking with Tribalfootball.com last season, told us: "Myself and Rafa Benitez could perhaps connect, again, and at Valencia. I have always said that the proof is in the pudding regarding how well managers and technical (sporting) directors work together and regarding the sheer amount of work they put in to make it an effective collaboration.

"We have both shown that we are more than capable in our roles at Valencia."

Given the experience of both men, there's no reason why Brands and Benitez should tread on eachother's toes.

The new manager just needs a quick, positive start - on the pitch and in the market - to convince cynical fans to take a second look. Benitez and Everton. Can it work? Well, of course it can...