Other than the Europa league win over Real Sociedad and winning at Manchester City, I think Manchester United produced the best performance of their season in the second-half against Tottenham on Sunday.

If you think about the goal that was ruled out, there was nobody anywhere who thought that it should have been chalked off, but rather than derail the boys, it served them to knuckle down and forget about the sense of injustice.

They played some excellent football in the second-half. Mason Greenwood's ball for Edinson Cavani's diving header was brilliant. Paul Pogba, once again, indicated to people what a massive asset he can be to Manchester United when he turns in performances like he did in the second half against Spurs. I thought he was sensational, nobody could get near him.

SEASON SUCCESS - EUROPA LEAGUE OR NOT

I don't think this season will be considered a failure if United don't win the Europa League. This is because of how they have managed to bridge the gap.

Manchester City are in the box seat at the moment, but we've beaten them and we are a lot closer in terms of where we want to be as a team. Second place is looking set especially after Leicester dropped points at the weekend, we're now 7 points ahead.

We've lost the exact same amount of games as City, which is four and three of those four defeats came in the first six games. What Ole and his team has done has been nothing short of fantastic. And if we can win a trophy and finish in that second spot, it would represent a fantastic season for Manchester United and without question shows they are going in the right direction.

When Cavani came back into the team after an injury lay-off against Brighton, I was a bit skeptical that he lost some of his sharpness. He didn't play particularly well and then I thought mentally, is he following up with all the newspaper reports that he was perhaps ready to go?

But I watched his performance against Spurs and the elation he had after scoring indicated to me that Manchester United is where he wants to be next season.

I would love him to stay for another campaign. That's not to say that I don't think we should still target a centre-forward this summer, because Cavani is going on 35, but he's looked after himself, his sharpness in the box, both for the goal that went in and the one which was disallowed.

And, perhaps just as important is that Cavani is an example for any young player who has aspirations to be a number nine.

Even though we've scored a lot of goals, the forwards that we've got tend to hang back. If you analyse our games there's very few where people have busted a gut to get themselves towards that six-yard box for crosses coming in, Cavani will do that all day long. 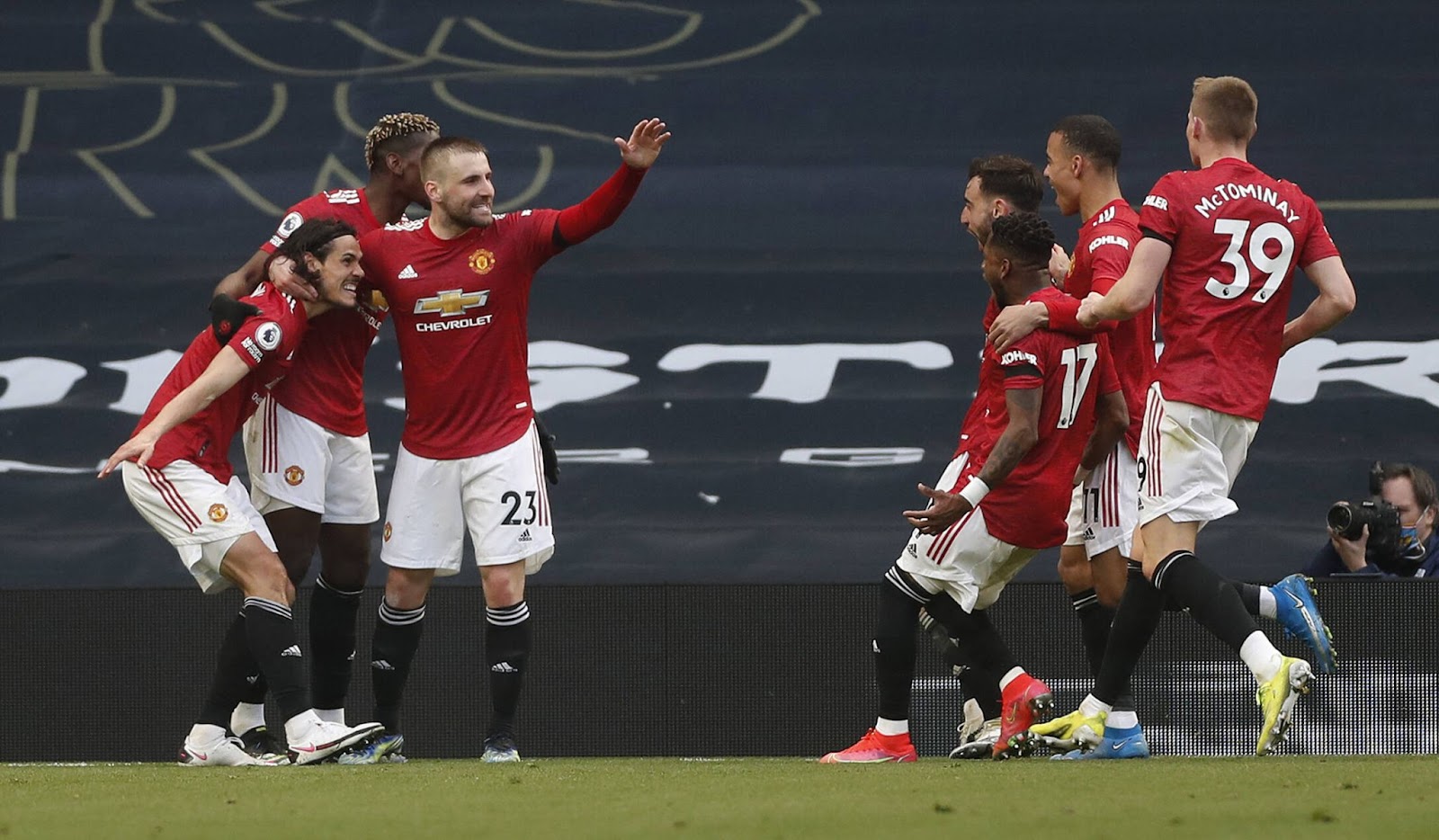 Cavani (L) celebrating with his teammates

I'd definitely be taking Mason Greenwood to the Euros if I was Gareth Southgate.

If you had asked me a couple of months ago when Mason Greenwood found himself in that position for the third goal against Spurs, I would have been sceptical about whether he would go on and score. But on Sunday when he received the ball, I had a warm feeling that he was going to score and he did just that,.

You can just see the last couple of games when he has scored a couple of goals, the confidence is starting to come back to him just at the right time with the run-in until the end of the season.

If he continues to turn in performances like he has done in the last four games then I just can't see how Gareth can ignore someone of that talent.

He can play either wing, he can play down the middle, he's quick. And most importantly, he can put the ball in the back of net, which is a massive asset for a manager to have in a tournament.

Anthony Elanga suffered a cruel injury against Leicester City earlier in the year and I didn't think he would play again this season. He was on the cusp of the first-team at the time and I think the manager has gone on record saying that.

So for him to not only battle his way back to playing again before the end of the season, but also the manager showing the faith in him before he got injured, it's going to give him a massive lift.

This lad will catch pigeons, and he's little bit like Mason Greenwood in that he can go left, right and right down the middle. He can also score goals, I've seen him score goals of real quality this season.

It will give him a huge boost of confidence to know that if you keep turning in performances, as I've mentioned in this column before, then Ole will have no hesitation bringing him into the first-team.

Ethan Laird, Di'Shon Bernard, James Garner. These are players that, when they come back in the summer, will be considered for first-team action. Hannibal Mejbri and Shola Shoretire are two others. Elanga has the same belief and confidence in his own belief which is absolutely necessary.

To play for Manchester United you need to have that confidence or else it will just swallow you up. Thankfully these lads have a manager and coaching staff that know when those attitudes step over the line into arrogance. In terms of Anthony Elanga, he is definitely one for the future, there's no question. 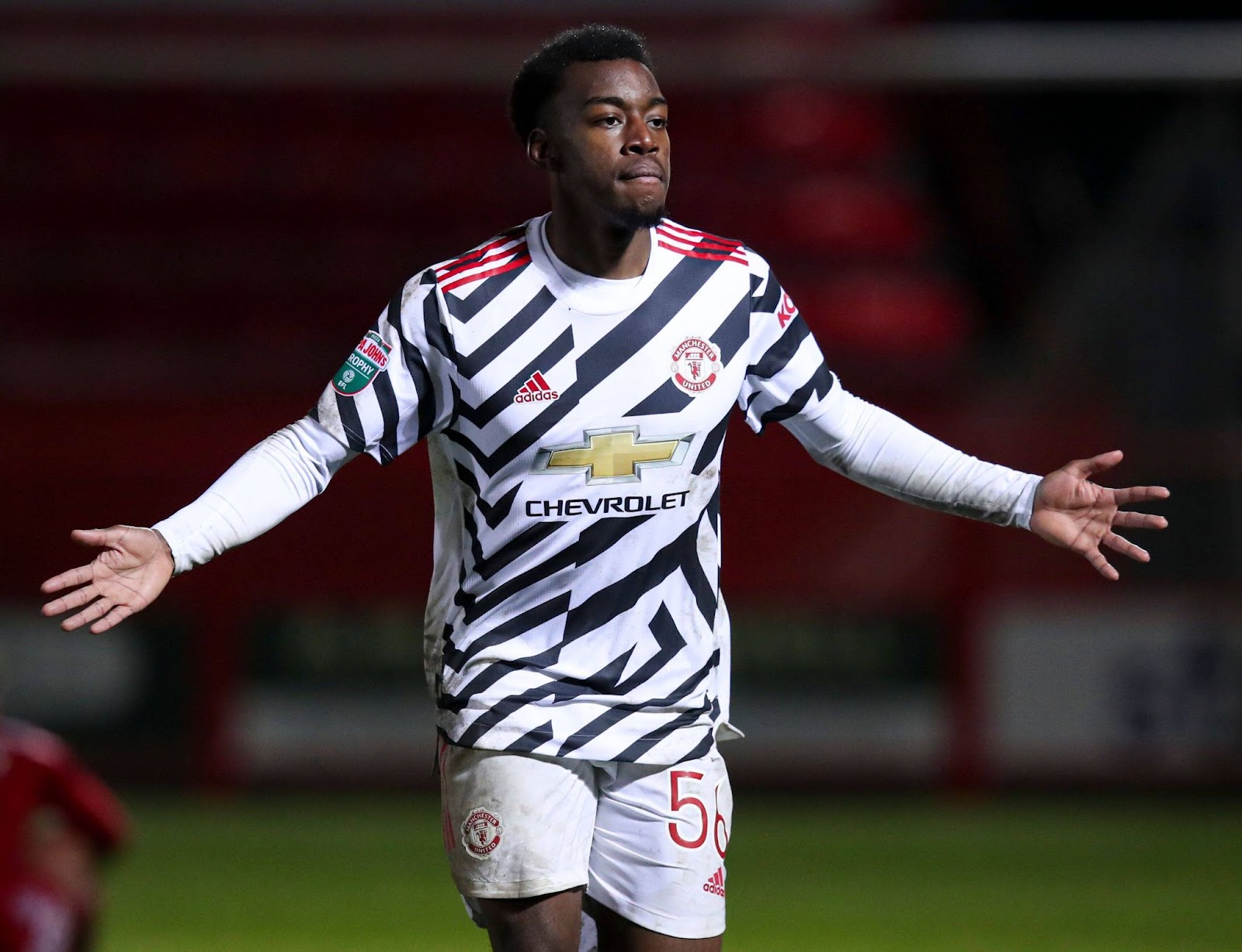 KOVAR READY FOR THE FIRST TEAM

We've got an exciting goalkeeper corps below the first-team at the moment. Nathan Bishop has been doing well, as has Ondrej Mastny. But the standout for me is Matej Kovar.

I've been championing Kovar for a long time, even after things didn't quite work out for him during his short time with Swindon Town.

I've watched him numerous times in the U23s and he is a confident young goalkeeper with huge potential and also very likeable.

Great with his feet, Kovar is a big tall goalkeeper who is happy to come for crosses and is very agile. I went on record last season, before Dean Henderson returned, saying that Kovar could be one of the first goalkeepers promoted from the academy to the first-team for a long time, I actually think he's that good.

I just hope that the disappointment of what happened at Swindon doesn't derail him and that he is mentally strong enough to learn from it. He has got plenty of time and whether he makes it at Manchester United or he doesn't, he will definitely have a career in the game from what I've seen. I'm not a goalkeeper coach by any stretch but I imagine he must be a dream to work with.

For United, it is promising that the goalkeeping department is looking strong from top to bottom.