I'm not going to Turin this week because of the pandemic, so I'll be doing the commentary for MUTV from Old Trafford, just as I did for all three of United's away fixtures in the group stage.

To be honest, it is a bit eerie. It's literally just me and another co-commentator sitting with two TV screens staring at Old Trafford's pitch in the pitch dark. It's very weird and we have to do the commentary as if we are actually there.

When I'm at games, I'm usually able to grab a quick word with Ole Gunnar Solskjaer before the match. But after the game it very much depends on what the mood is like. And after Sunday's draw at West Bromwich Albion, it obviously wasn't great. We had the chances to win it but I don't think we moved the ball quickly enough and played well enough, and the final ball into the box was poor. Edinson Cavani was on the pitch for the full 95 minutes and I can't recall him having one clear cut chance.

Despite our run of results, it is mathematically possible for us to catch Manchester City. There are 42 points left to play for and they are 10 points ahead of us, so there is absolutely no way that I would concede, at this early stage, that the title race is over.

But with the points United are dropping, whether they deserve too or not, it is always going to make things more difficult because City have been extremely consistent. You are just hoping that we beat them when we play on March 6 at the Etihad, and I know they've got to play Arsenal and Leicester, so hopefully the gap can be narrowed, so long as we don't keep slipping up ourselves.

We just need to concentrate on what we're doing and that starts with three points against Newcastle United on Sunday, because after that we have two massive away games against Chelsea and City.

GO FOR THE EUROPA

There have been people calling for United to forego the Europa League. I'm not one of them. I think we're well in with a shout of winning it.

Real Sociedad, at the time the draw was made, was probably as difficult a draw as we could have got. Throw into the mix that David Silva is there, Adnan Januzaj is there, it just adds a little more spice to the match.

It is going to be a difficult tie, but I do feel as though if we can get through this round of 32, we've got a strong chance of winning this competition. And being in the quarter-final of the FA Cup as well, you're only one game away from Wembley and two from being in the final.

We have proved many times this season that when we need to pull a result out we will do it. We avoided City in the quarter-final but the next toughest game we could've got was Leicester. We're going to do it the hard way if we're going to win a trophy this season, there's no doubt about it. But for me, if we can win a trophy and still be up there challenging for the title, whether we win it or not, then it will be seen as a massive improvement over where we were this time last year.

Before the last U23s game, we had an email given to everyone involved that Shola Shoretire is actually pronounced as Shola Shor-ay-ti-reh. The name is from a Nigerian origin and that's the way Shola's father has asked for his name to be pronounced. It's a name United fans should get to know well because he is one of the finest talents in the academy.

Neil Wood has played him in a more central role recently and moved Hannibal Mejbri out on the left-hand side, and it has just changed the whole dynamic of the team. Shoretire is now getting on the ball more and seems to be making things happen. He's finding space, and more importantly, he's having an impact by scoring goals. He followed up his hat-trick against Blackburn with another goal in the win over Arsenal. 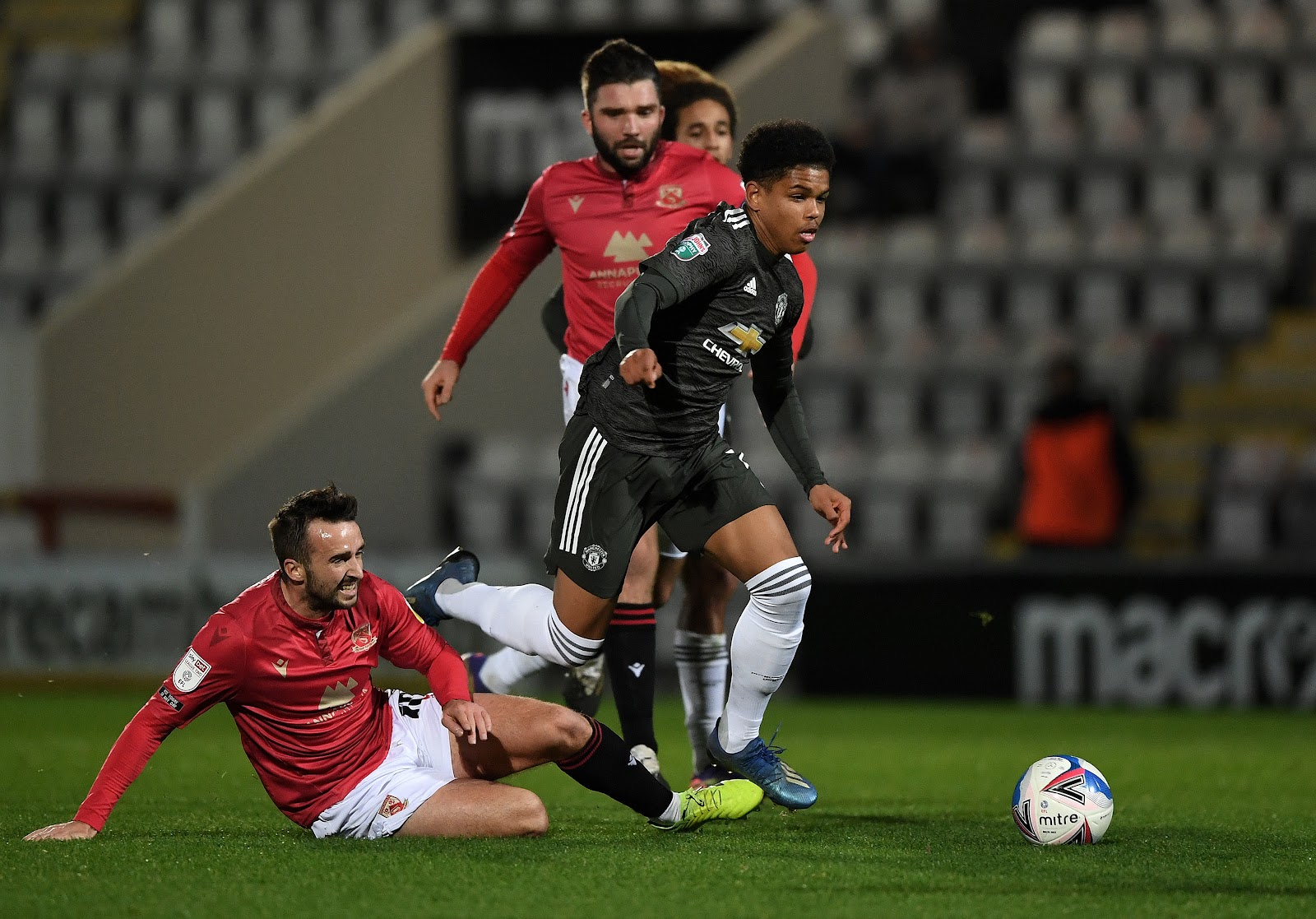 Shoretire against Morecambe in the EFL Trophy last year

Shoretire has been a massive part of United's U23 resurgence, and Neil Wood has got to take so much credit. There are players on loan, there are players who are injured and unavailable, and he's constantly having to juggle his squad. Especially the last few games when we haven't had a sufficient amount of substitutes. Neil has done an incredible job. In their last three games, the U23s have scored 15 goals. 15 goals! They are really entertaining to watch, you're always guaranteed goals, there's no question.

Now they've moved themselves from mid-table to the higher echelons of the league, with the average of the team, is a fantastic achievement. Shoretire has been a huge part of that, with how he creates and makes space for himself, and one step further by putting the ball in the back of the net.

I think at some stage there's every chance you might see him make an appearance for the first-team. He's only 17 so I'm sure, when it is appropriate, Ole will introduce him onto the pitch, whether that is against Real Sociedad or later in the season. He's right up there with Mason Greenwood and Brandon Williams, in terms of having the potential to become a prominent member in the first-team squad heading into the future.

And Shoretire is not alone. Hannibal Mejbri has been absolutely outstanding this season.

The poor lad gets kicked from pillar to post in every game, he really does. But he has developed this sort of steeliness, this mentality where he knows he is going to get kicked. But there's none of this rolling around on the floor, he gets up and wants the ball and says 'if you're going to kick me, kick me again, because I'm just going to keep doing the same thing over and over'. And that's a positive, brilliant trait to have. He doesn't go into his shell and just keeps wanting the ball.

So, Hannibal is another one that I feel is not too far away from being involved in the first-team squad. There are also plenty of players who have gone out on loan who are doing well; Ethan Laird, Di'Shon Bernard, James Garner, to name a few. We can't afford to forget them because this latest crop of youngsters are lads who have huge potential.

Joe Hugill is somebody Ole Gunnar Solskjaer and his staff will be keeping an eye on. He scored four against Liverpool, and another terrific back-post header against Blackburn straight after that. I saw him earlier in the season when he came into the U23s and scored straight away. Hugill is an out-and-out goalscorer. He wants to get in the box, he's got two good feet, he's rangy so he can move well and he's also really good in the air.

Hugill has got all the attributes to be an all-out number nine. He wants to bring other people into play, lay the ball off and get into the box and score goals. His goal record, both for the 18s and 23s, has been exceptional. And he is somebody else who I'm sure Ole, over the next six to 12 months, will be keeping an eye on his progress, and possibly introducing him to the first team, because one thing is we know is putting the ball in the back of the net is one of the most difficult skills in football, and Hugill seems to do it with relative ease.

WHO IS WILL FISH?

One name who has flown under the radar in the academy this season is Will Fish, who has been exceptional for the U23s.

In the first-half of the season, he was paired alongside Teden Mengi, who we all know has already made his senior debut. Those two were extremely solid together. Perhaps because he played for the first-team, it is Teden Mengi who everybody has been speaking about. But make no bones about it, Will Fish has had an exceptionally good season and he is somebody people will need to look out for in the future. He's quick, he reads the game extremely well, strong in the air and in the tackle, everything you could want from a centre-half. 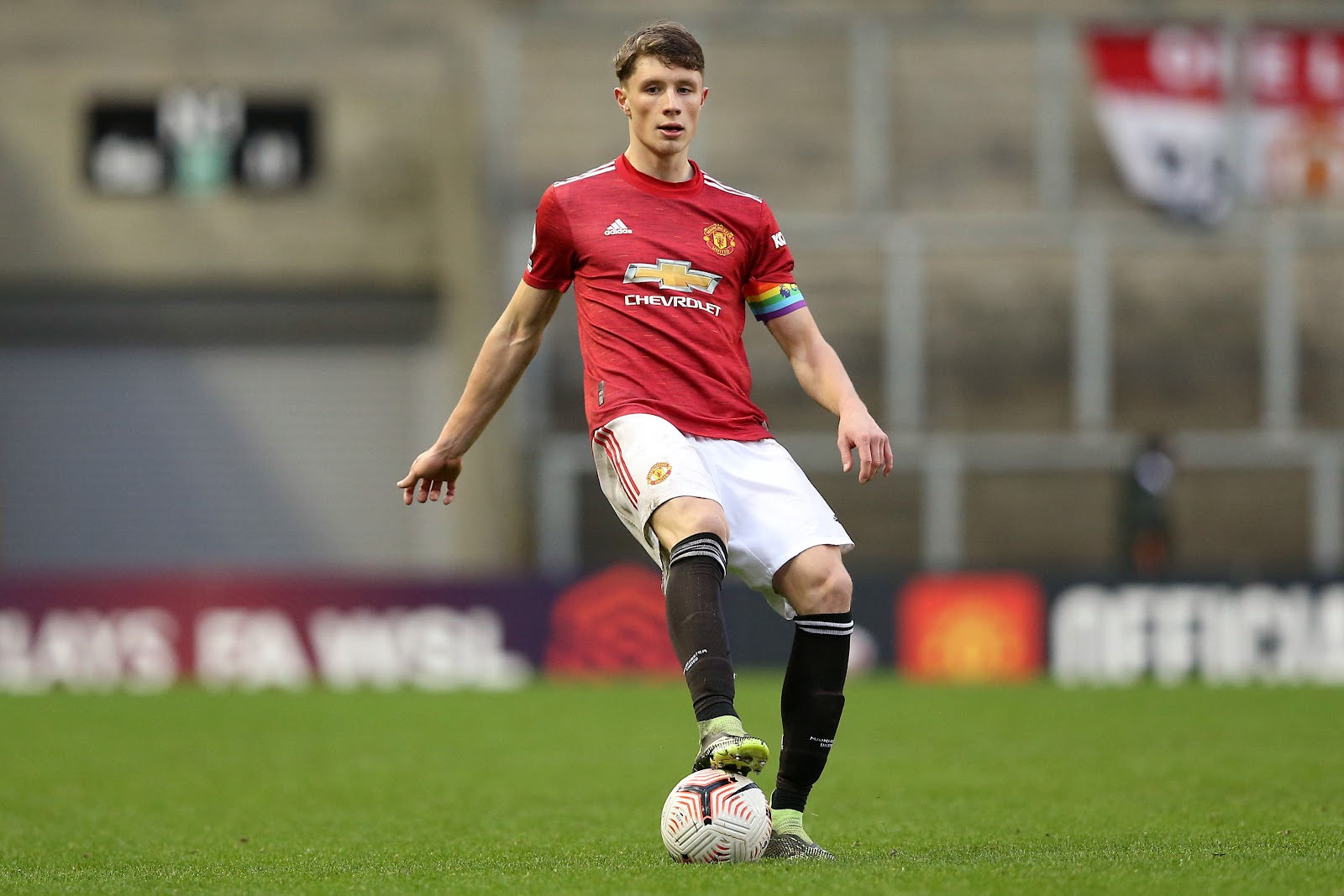