Battle of the crossers: Why Liverpool will dominate Man City if...

When people talk about Liverpool they talk about pressing, counter-pressing and counter-attacking, yet crossing is a hugely important part of their game that often goes unnoticed. Jurgen Klopp's side cross, a lot, and their crossing in from wide areas will no doubt be key once again when they take on Manchester City this weekend.

According to WhoScored, Liverpool average the second-highest amount of crosses per game in the Premier League, with their 26 just one behind Manchester City. Of course the argument then would be that they have more possession than most other teams, so are naturally going to play more crosses. There's merit to this argument – after all, Liverpool do also average more short passes and through balls per game than most Premier League sides.

I looked a little deeper into these numbers to get a more nuanced understanding. Multiplying their average possession (58.6%) by 90 minutes, we can figure out how many minutes in an average match Liverpool spend in possession of the ball – 52.74 minutes to be exact. We can then divide this number by the amount of crosses they play on average (26), giving us their 'minutes of possession per cross'. It turns out Liverpool average one cross for every 2.03 minutes of possession. Only two teams – Sheffield United and Burnley – cross more frequently.

One reason for this is that many opponents like to sit deep and congest the centre when they play Liverpool, making it hard for Klopp's men to break through the centre and forcing them to go wide. Another reason is that Liverpool are actually pretty damn good at crossing the ball.

In a presentation at the 2017 OptaPro Analytics Forum, Garry Gelade argued that crossing was more effective an attacking tool than previously thought. "Some [argue] that it takes 92 crosses to score a goal," he stated. "But that number only considers the immediate effect of a cross. When we acknowledge the indirect effects of a cross…we find that it needs only about 45 crosses to produce a goal."

Scoring directly from a cross is hard. It requires extremely accurate delivery to pick out a teammate, over distance, in a crowded area. It also requires said teammate to be able to time their contact with the ball to perfection to steer it not only on target, but past the defenders and goalkeeper in front of them. But as Gelade says, there are many ways that a cross can eventually lead to a goal that do not involve a simple two-touch instance of cross-shot.

Going through every single one of the 25 league goals Liverpool have scored this season, it became clear just how crucial crossing is to their attacking potency. Six of their 25 goals scored came directly or indirectly from a cross. Indeed their very first goal of the campaign, against Norwich, came from a driven Divock Origi cross that deflected in off opposition defender Grant Hanley. 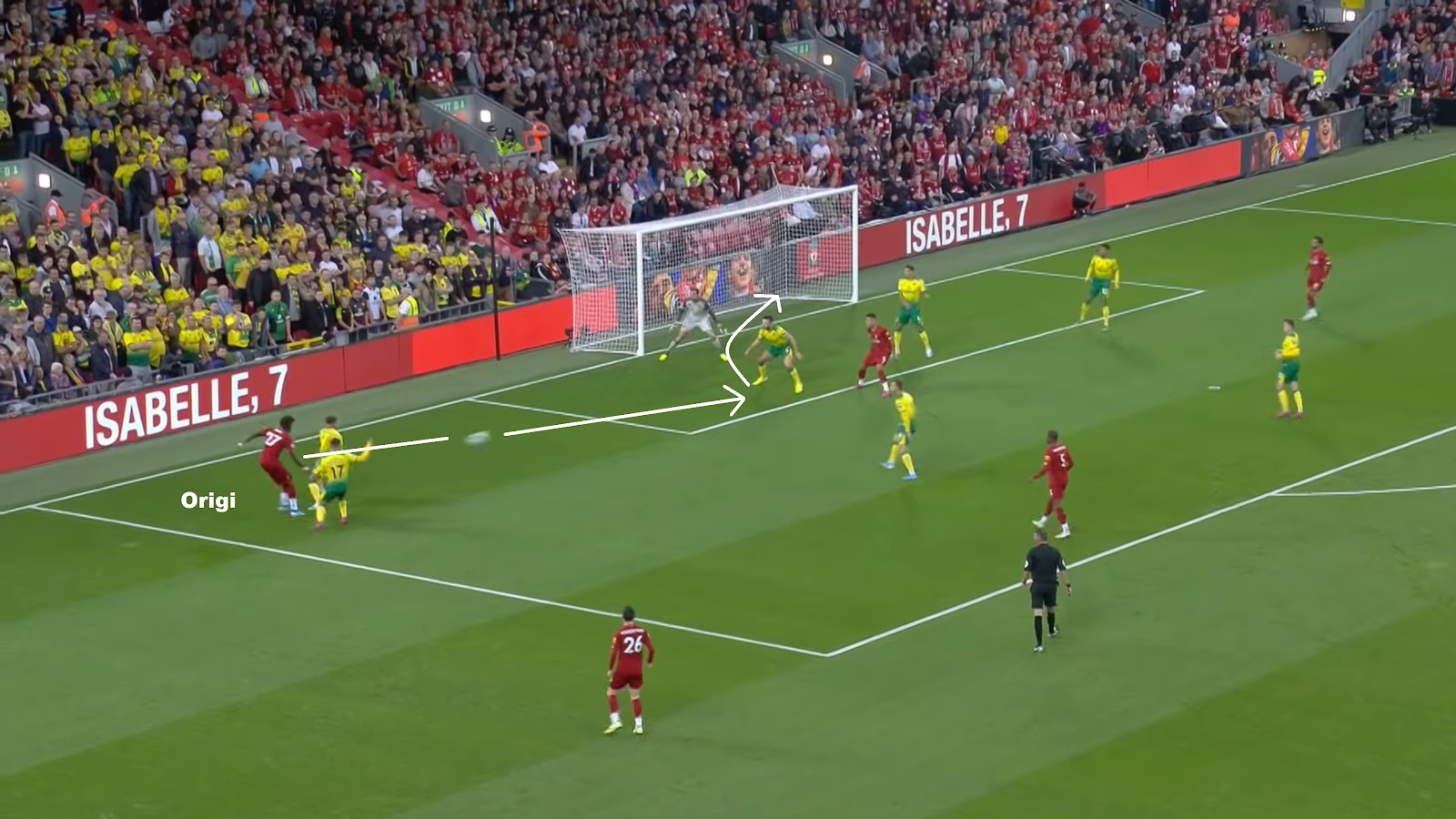 All things considered, 24% of Liverpool's league goals have come from open play crosses. That's just under a quarter of their total. (If we wanted to combine crosses from open and set play situations, crosses in general have led to 40% of their 25 league goals this term.)

The front three in Klopp's 4-3-3 with Mohamed Salah and Sadio Mane inverting, rather than staying wide, attacking the space in back lines with their pace, dribbling and combination play with Roberto Firmino is too devastating for opponents to ignore. Often the opposition will sacrifice space in the wider areas to stop Salah and Mane from running riot in the channels. But in full-backs Trent Alexander-Arnold and Andrew Robertson, Liverpool have players to take advantage of the time and space allowed out wide.

Alexander-Arnold and Robertson have both contributed three assists in Premier League action this season. None of their teammates have contributed more. The former makes more key passes (3.6) per game than any of his teammates, while Robertson is fifth with 1.4. They also play the majority of their team's crosses – Alexander-Arnold averages 2.6, while Robertson averages 1.1. In terms of key passes averaged, both are in the Premier League top 20. In terms of crosses averaged, they are both in the top 30.

Robertson is an energetic flying full-back who loves to overlap and cross in at pace; Alexander-Arnold is a converted midfielder who prefers to curl in from deeper areas. They both attack the flanks, the 'wingers' tuck into the penalty box along with Firmino, and the cross in is played. Georginio Wijnaldum often makes late runs to join the front three in the penalty area, while the other midfielders and the far-side, non-crossing full-back linger outside the area looking for any loose balls to recycle possession, shoot, or throw in another cross. 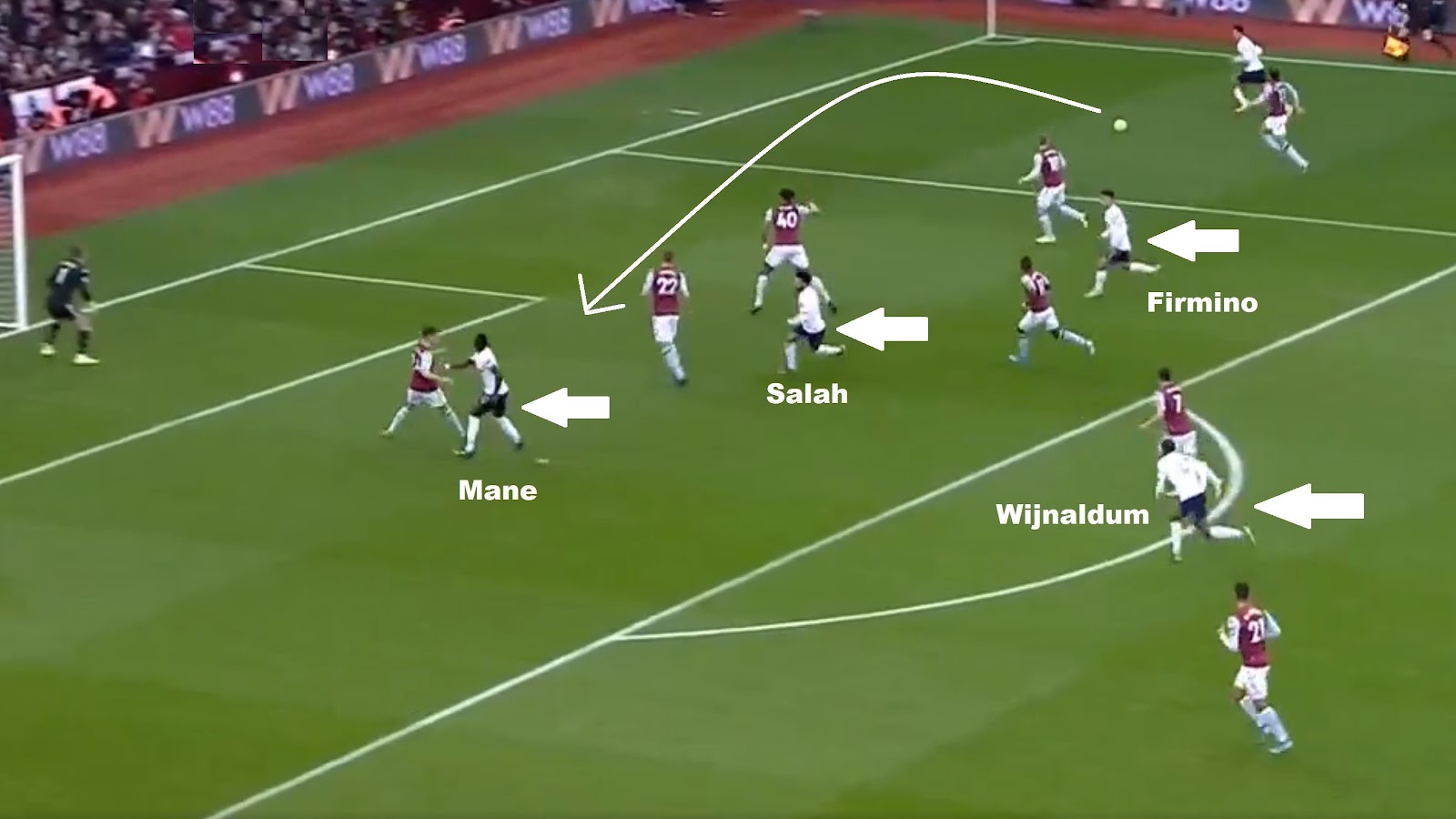 Manchester City should fear these situations just as much as they do Liverpool's pressing and counter-attacking game. But Pep Guardiola's side are well-prepared to deal with it. They also like to dominate possession and this season have conceded the lowest amount of crosses per game – 10.

Guardiola will want his side to press high and cut out Liverpool's crossing before it can even be set up. If they can't progress into the final third, Klopp's men cannot load up the box and their full-backs can't whip in their crosses. The same goes if they cannot get hold of the ball in the first place.

However, if Liverpool do dominate possession and territory, City could do worse than copy their nearby rivals, Manchester United. In their 1-1 draw earlier this term, United defended in a 5-3-2 that saw their wing-backs close down Liverpool's full-backs while their back three handled Liverpool's front three. For the most part this worked, though Liverpool did still manage to break through late on when United sat back more, looked to defend their lead, and Robertson found Adam Lallana with – you guessed it – a cross into the box.

Tactically, Liverpool are one of the most organised and effective teams in Europe right now. Their defensive shape is compact, their pressing is intense and well-orchestrated, and their attacking transitions are brutally efficient. But they are also a well-rounded team, capable of doing almost anything to get a goal. That includes crossing it into the box, an old-school attacking strategy that could undo Manchester City if they aren't properly prepared for it.