COMMENT: So, you drop him, right? On these stats. On this goals record. How can Mikel Arteta justify sticking with Pierre-Emerick Aubameyang as an automatic first-choice at Arsenal...?

The stats are a disaster. And even more so if you draw a line between Aubameyang post- and pre- putting pen to paper on that £350,000-a-week contract. One goal in the Premier League this season. A strike on the opening day at Fulham - and before he inked that deal. In other words, for the six weeks since signing forms, Aubameyang is yet to repay those whom championed this record agreement with a goal. And if you drill down deeper, things only read worse.

Prior to his new deal, Aubameyang averaged 2.8 shots a game - yet it is now down to just one. His shots on target have dropped from 1.3 to 0.6 - and most significantly, his touches in the opposition box are now at 2.4 every match from 4.8.

Now, this column is no great fan of match stats, and you can often manipulate them to skew any outcome you wish. Indeed, nothing is more accurate than the naked eye. And on current performance, Aubameyang isn't just struggling to find the net, he's struggling to even find the ball. As the old timers say, he's just not 'at it'.

The energy. The snap. Everything you expect from a player in the opening rounds of a season - it's been missing from Aubameyang's game. There's no lung-bursting dummy runs. There's no great effort off the ball. The intensity. The vitality. The hallmarks of a great Aubameyang performance. They've disappeared since signing that deal.

Has it been an influence? Well, those at London Colney insist that's a negative. Aubameyang's work in training. His commitment in the gym. None of it has visibly tailed off. He's as driven as ever on the training pitch. Now the highest paid player at the club, no-one begrudges him such status. He remains the leader in the locker room. The senior player young teammates look up to - a responsibility he has enthusiastically embraced. The attitude hasn't changed. But something has hit Aubameyang on matchday. 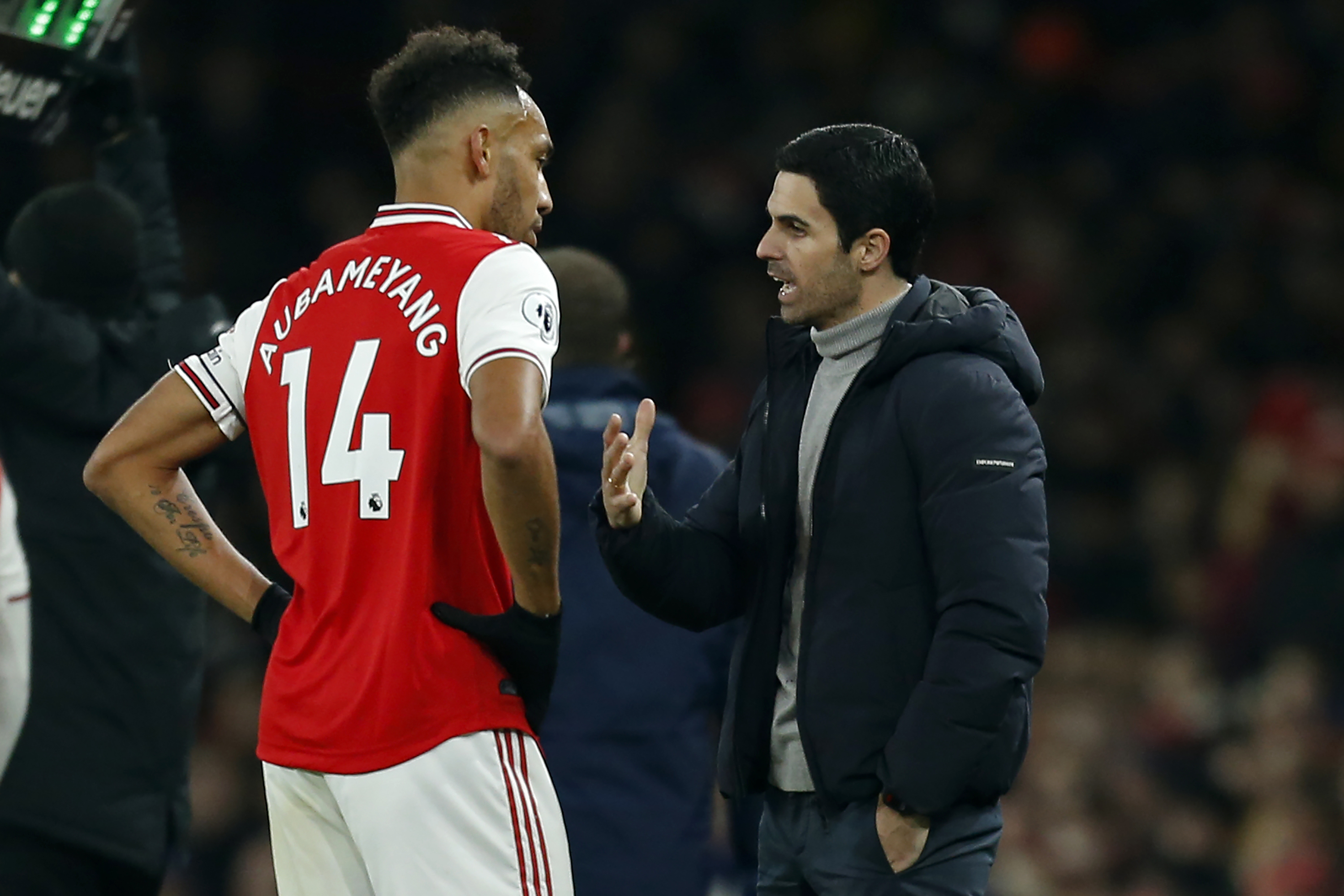 The stats. The goals record. It may all scream otherwise, but Arteta won't withdraw him. Aubameyang's influence on Arsenal goes way beyond his own personal performance.

Put to one long time coaching source after defeat to Leicester City on Sunday that it was time for Aubameyang to make way, this column was told: "You're not just talking about withdrawing Auba the player, but also his effect on the players around him. The boys walk a foot taller when he's around."

And that's where match stats fall down. Aubameyang is struggling. And for another player. Another personality. Arteta wouldn't be so accommodating. But Aubameyang is his captain. His talisman. And as dramatic his form slide has been, simply the presence of Aubameyang on the pitch offers Arsenal a better chance than if he was left on the bench.

For the moment, Arteta is emphasising the collective - including dragging the ever maligned Alexandre Lacazette into the issue. Both he and Aubameyang drew a blank against the Foxes, but three goals in five games reads far better for a striker than the record of his captain. Yet the Frenchman will still get it in the neck from pundits watching on. And if a change up top needs to be made, it'll be Lacazette - not the skipper - whom Arteta will choose to replace.

Ahead of the Europa League tie with Dundalk, Arteta conceded: "It is something we have to improve in the final third, the solutions we have to give them to attack better, to be more continuous, to be able to sustain attacks in longer periods and put the ball in the box more. We have been working on that so hopefully we can improve it."

The problem for Arteta - and he knows this - is that while he is urging an improvement in their build-up. A consistency in their attacking moves. The manager knows a big part of all that last season was an energetic, all-action Aubameyang. As much as he was on the end of things last season - the striker was also involved at the beginning of attacks. Which is something we've not seen from the 31 year-old this term.

There is an argument to be made that Arteta has clipped Aubameyang's wings with his lone striker system. With Lacazette being played centrally, it's been claimed Aubameyang has found himself ineffective and isolated on a flank. But that doesn't explain the captain's lack of overall contribution. Arteta's hope was to garner the energy and leadership of Aubameyang by having him in possession more frequently than he would being employed as a lone central striker. For the Aubameyang of last season. Indeed, the one on his previous contract. You can understand Arteta's approach.

But for now, it isn't working. It did at Fulham. Both Lacazette and Aubameyang were on the scoresheet. But since then, things have become more and more laboured. Arteta is trying. And as much as it's a challenge for Aubameyang, it's an early test of the manager and his tactics. Arteta has publicly recognised his captain is a marked man - and that he needs to find a way to free him up.

“Teams pay a lot of attention to him," says Arteta. "That's why sometimes we have to change his position, because every team is preparing to stop him."

Significantly, Arteta insists the situation has nothing to do with form or confidence: “If it was another player, I'd say maybe it's confidence. But not with Auba."

So as mentioned, he's trying is Arteta. And it's why as poor as the playing stats are, Aubameyang won't be withdrawn. To his credit, there's been no finger pointing from the manager at his captain. He's taken on the burden to try and find a solution, which could even be to reverting to old ways.

"That's a very possible thing," Arteta replied when asked about shifting Aubameyang back into a central position. “It depends on the game and it depends on who is around him. But it's a very strong possibility to play him as a nine."

As dramatic the slide has been, for the manager - and his staff - Aubameyang's struggles have had nothing to do with his contract. It's about tactics, systems and how best to counter an opponent's plans for his best player.

And he can't do that, no matter how the stats read, with Aubameyang sitting behind him in the dugout.