There was a familiar aesthetic about Barcelona's midfield as they thumped fierce rivals Real Madrid 5-1 last weekend. The 4-3-3 system favoured during Pep Guardiola's halcyon era was in place, and within the central three there was a metronomic individual whose passing and movement reminded many of a former icon. In that match, Arthur, a Brazilian playmaker signed in the summer from Gremio, cemented his status as Xavi's stylistic successor.

Xavi was, and still is, such a unique footballer. While most great players are defined by a specific skill – their passing range, dribbling ability, or precise finishing, say – reverence for him is based predominantly around the machine-like consistency of his game. He made the complex appear simple, receiving the ball and finding a teammate, time after time, for the best part of his two decades with Barca. Others would have gotten distracted, bored or anxious performing this role, but Xavi didn't: he relished it, and he perfected it.

It was with him in the side that Barcelona enjoyed their greatest era. Legendary managers, including Guardiola, Frank Rijkaard and Tito Vilanova, came and went, but Xavi always remained. That is until he left in 2015 for the financial allure of Qatar and Al Sadd, where he still plays today. The consensus was that he was irreplaceable, that nobody could fill the gap left by his departure, and so the Catalan giants should just move on, change tactics entirely. These modifications did happen under Luis Enrique and Ernesto Valverde, but they didn't last long.

Arthur was given his break at the top level by Luiz Felipe Scolari, the manager who led Brazil to their most recent World Cup success in 2002. Making his debut for Gremio in 2015, the diminutive creator would properly establish himself two years later. In 2017 he starred for the club, helping them to third place in the Brazilian top flight and victory in the Copa Libertadores. Deployed in a withdrawn midfield role, he won the league's best newcomer award and made the team of the season. This, along with some important numbers, explained the covetous glances directed his way from Barcelona.

The 22-year-old made substantially more passes than anyone else in Brazil's Serie A last term, averaging 74.1 per game. For context, his teammate Ramiro, who was second to him in this category, averaged almost eight fewer per game. It wasn't just the sheer quantity of passes made that ensured Arthur stood out, but the consistency with which he found his colleagues – his pass success percentage of 93.1 was also the highest in the league.

"I'm a player who likes to have the ball at my feet, and organise play," he said when discussing his function within Gremio's system. "As a defensive midfielder I see more of the ball, further back. But as a playmaker, Renato (his manager at the time) is forcing me to get into the area, reach the goal and try to score, as well as thread the ball through. I am also forcing myself to support the attackers and wingers."

In July, Barcelona paid a fee of around £28m to sign Arthur. Within three months and seven starts, his qualities were reminding pundits, fans and players of Xavi. Even the great pass-master himself was making comparisons. "I see myself when I see Arthur on television," Xavi said when appearing on Catalunya Radio. "He is a very quick thinker…is already a mature player and I see that he has massive untapped potential. The priority during any match is to never lose the ball and he comes out of a tricky situation with ease. He has a strong personality already."

The most obviously Xavi-esque elements of Arthur's playing style are his relatively small physical stature; the fact his head is always up, scanning for opponents to avoid, teammates to find and spaces to exploit; and his quick turns with the ball at feet. However, there are also several tactical traits that help to further the comparison.

Within Valverde's currently favoured 4-3-3 shape, the Brazilian has found himself on the left of the midfield three, with Sergio Busquets in the centre and Ivan Rakitic on the right. An example of his role in the overall attacking structure can be seen in the below graphic. This shape provides stability during build-up and allows the nominal wide men – in this particular case Rafinha and Philippe Coutinho – to come inside and look to take up more central positions between the lines. 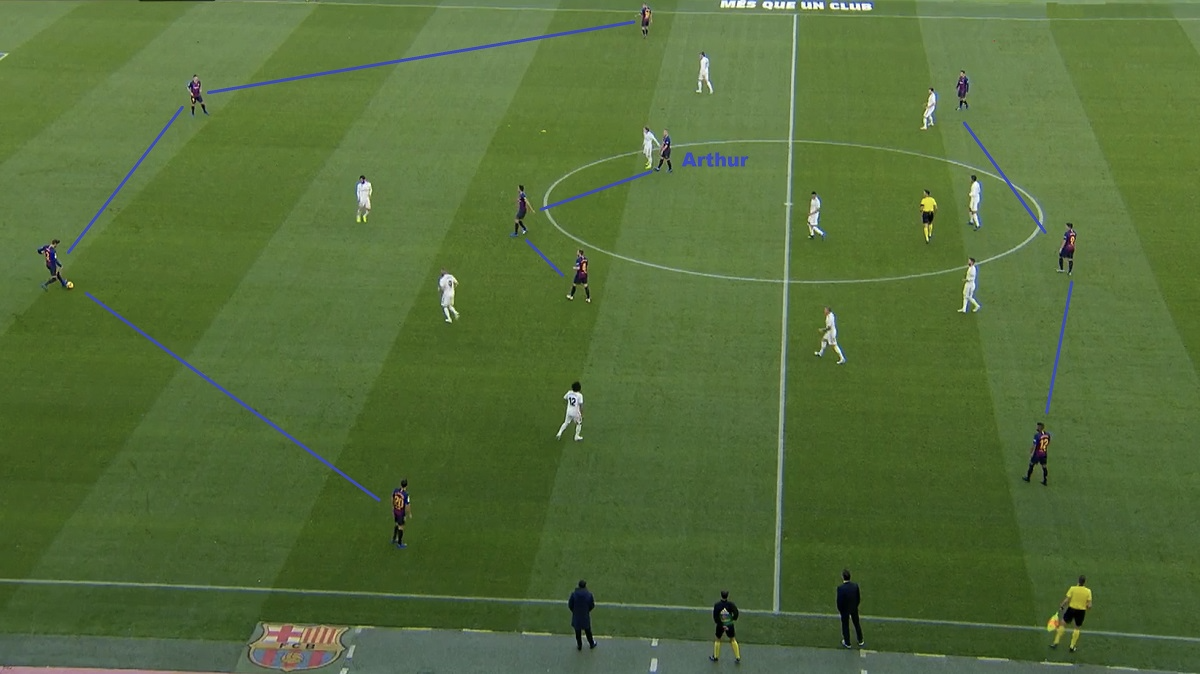 Arthur personally contributes to the stability of Barcelona's possession with his exceptional touch, composure and quick feet. If the ball is aimed towards him, it's probably going to stick. His resistance to pressure is backed up by the fact that he has been fouled just once per game since joining the reigning La Liga champions, less than Busquets and Rakitic.

Another tactical trait he shares with Xavi is his ability to find space and open up a passing lane for teammates. His aforementioned 'scanning' of the pitch helps a great deal in this particular respect. Below, in another screenshot taken from the humiliation of Real Madrid, he moves on the blind side of two defenders to find space and receive from Jordi Alba, who was closed tightly on the left touchline. 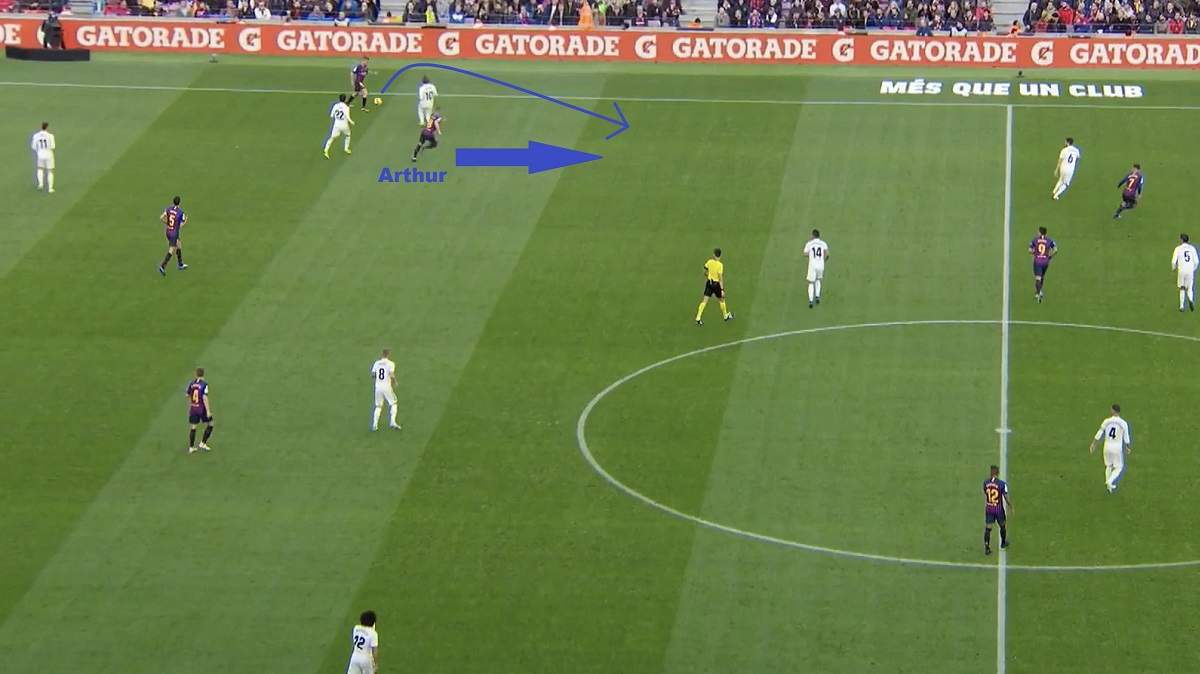 So far, so Xavi. And, without sounding repetitive, likenesses between icon and starlet can also be found in Arthur's simplicity and supportive nature. He prefers keeping possession ticking as opposed to attempting the spectacular – his 1.5 long balls per game is significantly fewer than Busquets' 4.2 and Rakitic's 5.6 – while only one player, centre-back Samuel Umtiti, can boast a better pass completion rate than Arthur's 95.1 per cent.

A lithe playmaker, he tends to support the construction of an attack, moving to form triangles and combine with his Barcelona teammates, but rarely makes forward runs beyond the ball. Perhaps the only non-Xavi aspect of his game relates to his defensive role – Valverde has utilised him higher up the pitch when pressing, as seen below.

The problem is this: Arthur can never be Xavi, no matter how many YouTube clips he watches, how much coaching he receives, and how many compliments back up this belief. But, as long as he plays for Barcelona, he will be compared to one of the club's finest midfielders, due simply to the fact he plays and looks quite a lot like him.

Some youngsters would crumble under this weight of expectancy, as if haunted relentlessly by a ghost from the past. But this particular player appears ready to craft his own legacy at Camp Nou, irrespective of the testimony thrown his way. "I am Arthur," he told El Mundo Deportivo, rather matter-of-factly. "I am my own person."