Arteta vs Ozil: Why Wenger wrong on his 'super talent' Arsenal outcast

COMMENT: Mesut Ozil and Arsenal. Arsene Wenger says the game's passed him by. But is it that easy to explain away? Indeed, is it simply too easy for Ozil to be absolved of any blame for his current situation...?

It was a little confused. Befuddled. But Wenger's opining on Ozil's demise at Arsenal did have a ring of truth about it. The German, at 31 and for the style of player he is, should be enjoying the peak years of his career. Winning games on his own. With a pass. With a ghosting, late move into the box. All the experience and when and where to act, it should've all come together for Ozil and be at the service of Arsenal and Mikel Arteta, his manager.

Instead, the midfielder has been left in the stands. And for months. He hasn't been seen since July. Wenger, the man who brought Ozil to the club, is right. It is a waste.

"I feel it is a waste for him," said the former Gunners manager as part of his new book tour. "Firstly because he's in the years where a player of his talent can produce the most. And it's a waste for the club as well because he's a super talent, a creative talent that in the final third can create that killer pass."

Correct. But Wenger's wrong when he says Arteta needs to find a way to involve Ozil. As mentioned, the Frenchman's plea was a little confused. On the one hand admitting today's game has no room for a luxury like Ozil, yet on the other imploring Arteta to find room for him.

Wenger continued: "The way football is going at the moment it's quick counter-pressing, quick transitions and everybody plays the same. It's kicked out players like Ozil. Although let's not forget who this guy is. A world champion who has played at Real Madrid.

"He's been the record player of assists, so you have to find a way to get him involved again."

No, Arteta doesn't. He really doesn't. Particularly on current form - and attitude.

Don't read this wrong. Ozil isn't a disruptive influence at London Colney. He clocks in. Does his work. Then clocks off. Doing enough to satisfy the commitments to his club. But that's it. He's not pulling up any trees. He's not going out of his way to win over anyone. Ozil is basically going through the motions. And in front of a manager who already has a record of adjusting his opinion on players - the change of fortune for David Luiz and Dani Ceballos two prime examples. Ozil's approach suggests there's more to this than simply the game passing him by. 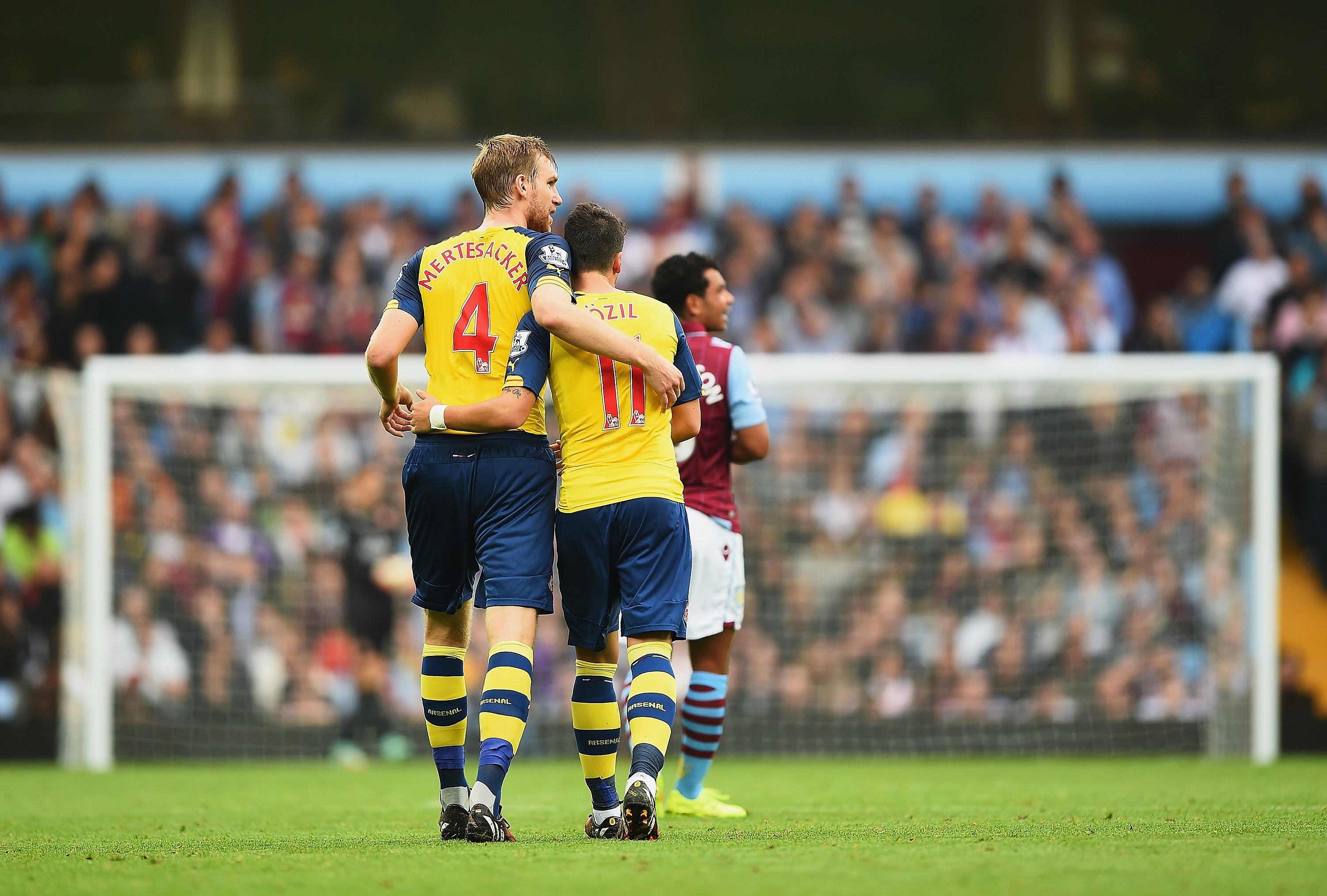 Mertesacker and Ozil together at Villa Park

One who hints as much is Ozil's long time former teammate Per Mertesacker. Now in charge of the club's academy, Mertesacker played with Ozil at Arsenal, Werder Bremen and with Germany. Club politics aside. And with the pressure from on high over Ozil's £350,000-a-week wages, if there's one man inside the club to make an honest valuation of Ozil's situation it'd be Mertesacker. Given a relationship that stretches back 12 years, you'd expect his assessment of the Ozil of today to be sober and restrained.

And speaking to the German-language 'Kick and Rush' podcast, Arsenal's academy director gave it to us straight. Ozil has outgrown football. He has bigger priorities in his life. And as such, the motivation levels to convince Arteta on the training pitch have faded.

"A lot has changed away from the field. He got married, has a family. Perhaps the focus has changed," reasoned Mertesacker, before confirming what sources have told this column: that Ozil, despite his approach, is not a disruptive presence in and around the club.

"He's the only player I've played with for three teams - Bremen, Arsenal and also at the DFB. So I'm very sorry that he is currently in a situation where he is not really used.

"But when I see him, he's always in a good mood. He works hard and is good to train with."

So he'll do enough. Just enough. But he won't go out of his way to force Arteta into a rethink. In other words, Ozil isn't one to bend or compromise. He won't seek to develop different threats in his armoury as Ryan Giggs did in his later years at Manchester United. He won't rethink his approach - and work off the ball - like Peter Beardsley did as he entered the veteran stage at Newcastle. Why? Well, as Mertesacker states, he simply doesn't want to. Giggs and Beardsley, as many countless others at the level of Ozil, sought ways to reinvent themselves and their game for one reason: to stay involved. They wanted to remain with their respective clubs. They wanted to be valued members of their respective teams. But in Ozil's case, it's clear he doesn't want that. At least, he doesn't want that unless it's on his terms.

But the game catches up on everyone, even a "super talent" like Ozil. And the only way players of his age and his type remain at the top is by bending with the wind. But Ozil, in all these years at Arsenal, has remained the same player. And now it's all caught up to him.

Arteta's predecessor at Arsenal said as much earlier this year. Unai Emery, now in charge of Villarreal, declaring: "I tried with all my might to help Ozil. Throughout my career, talented players have reached their best level with me. I was always positive, wanting him to play, be involved.

"(But) he has to be self‑critical too, analyse his attitude and commitment."

On October 20, Arteta is due to name his 25-man Premier League squad. And after omitting Ozil from his Europa League list, there's every chance the same is going to happen next week.

A "waste"? Yes. But not of Arteta's making. Nor Emery's - not even Wenger's. Ozil was given every chance by his three Arsenal managers to work within their system. But he shunned them.

The effort needed to change was too much. Don't blame his wages. Don't even blame the modern game. For Ozil and his situation, that'd be too easy.