​Chelsea striker Werner: We have quality to beat Liverpool

Such is the quality of Manchester City and Liverpool right now, two of the other 'big six' Premier League sides could have any remote hopes of mounting a title challenge blown away within four matchdays. Arsenal and Tottenham Hotspur meet this Sunday at the Emirates Stadium in the latest instalment of the North London derby, and neither can afford to drop any more points if they want to keep up with English football's finest.

Arsenal have started the campaign unspectacularly, but positively. Their most recent 3-1 defeat away to Liverpool followed on from two narrow victories over Burnley and Newcastle United. Tottenham, however, have not had such a promising beginning, dropping five points from a possible nine with defeat to Newcastle and a draw with Manchester City in which they were fortunate not to lose.

This weekend, the two sides meet with the hope of reviving their seasons after sustaining early damage. Here, we preview the derby from a tactical perspective and predict who will win this vital encounter.

SPURS STRUGGLING IN ATTACK AND DEFENCE

After three rounds of Premier League fixtures, no team has averaged more ball possession than Tottenham's 59.9%. This stat doesn't necessarily prove anything of any major consequence due to its small sample size, but it does hint at the team's form. Spurs have generally dominated the ball, but they've regularly struggled to do anything productive with it.

On the opening day against Aston Villa, they went 1-0 down within the first 10 minutes. They then spent over an hour trying and failing to penetrate a newly promoted side that were focused primarily on defending their own penalty box. Spurs got plenty of players between the lines that day, but rarely got these players on the ball. They equalised eventually and went on to win, but in subsequent games similar issues have been apparent. 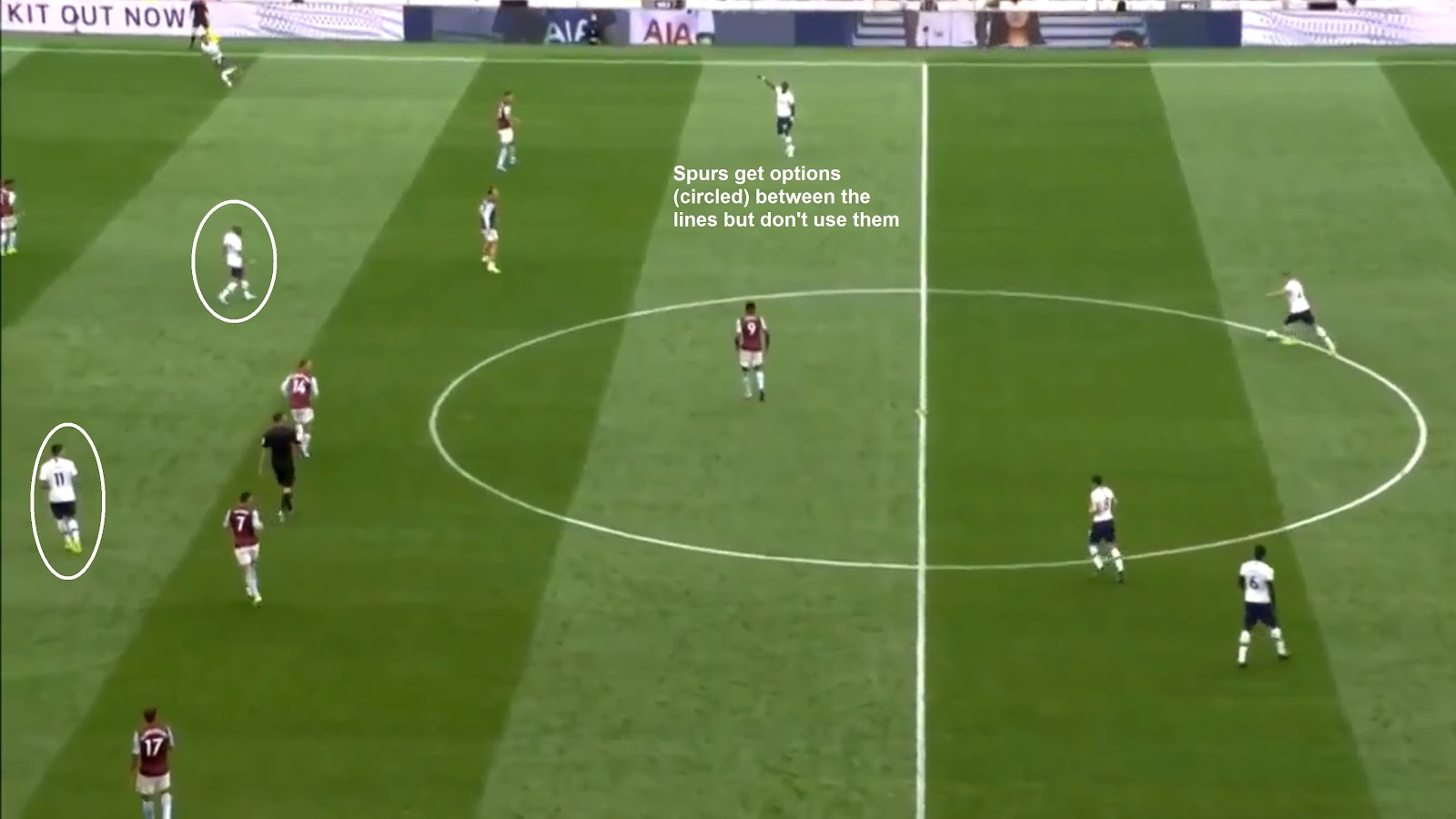 They were relatively lucky to come out of a clash with Manchester City with a point – they had just three shots, two of which hit the target, and both of them went in. City, by contrast, had 30 shots and 10 on target. Then came the 1-0 defeat to Newcastle at home, where again Mauricio Pochettino's men were unable to unlock a deep-lying defensive block.

The problem of breaking teams down may not be so relevant this weekend, as a derby with Arsenal will almost always lead to an open game where there is space for both sides at different times. However, another issue that needs to be fixed is the lack of organisation on the left-hand side of Spurs' back four. 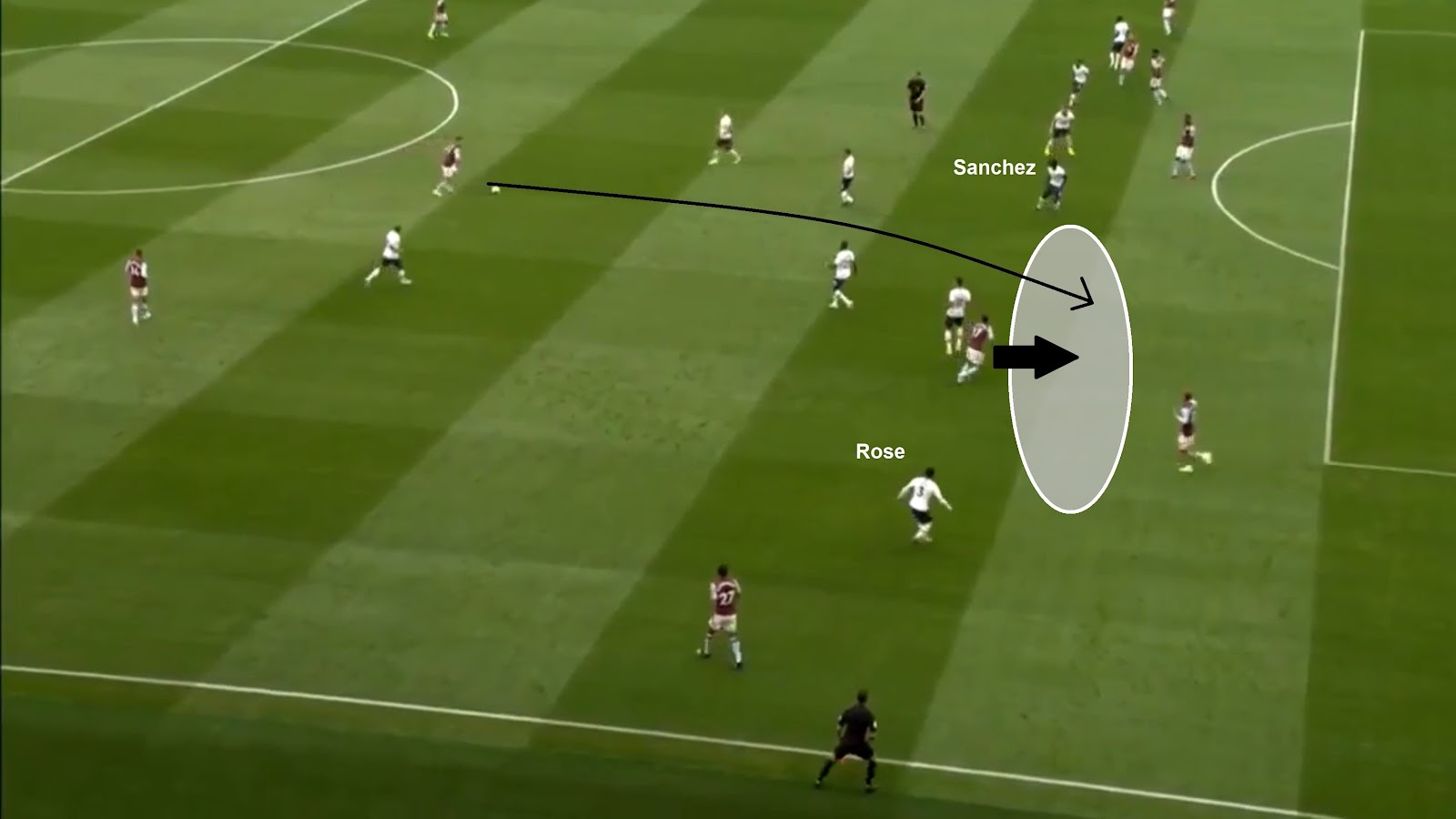 The space between their left centre-back Davinson Sanchez and left-back Danny Rose has been too open too often. This appears mainly due to the fact Rose doesn't tuck in enough, perhaps because he has grown used to playing as a wing-back in a five rather than a full-back in a four. In the graphic above this gap is seen against Aston Villa, but it was most noticeable for Newcastle's winning goal last weekend. Spurs can't afford for such huge holes to be left against an Arsenal side with real quality up front.

ARSENAL COME UNDER PRESSURE AGAINST BURNLEY

Sean Dyche's Burnley don't get a lot of credit for style, but they are widely respected for their effectiveness. In an era of strange ideas and new words, his side bring an element of English football tradition to the Premier League. And Arsenal didn't do a great job of coping with it in the second matchday. As the below graphic courtesy of Understat shows, their xG conceded that afternoon was 1.39, and they conceded a good few shots from inside their own penalty box. 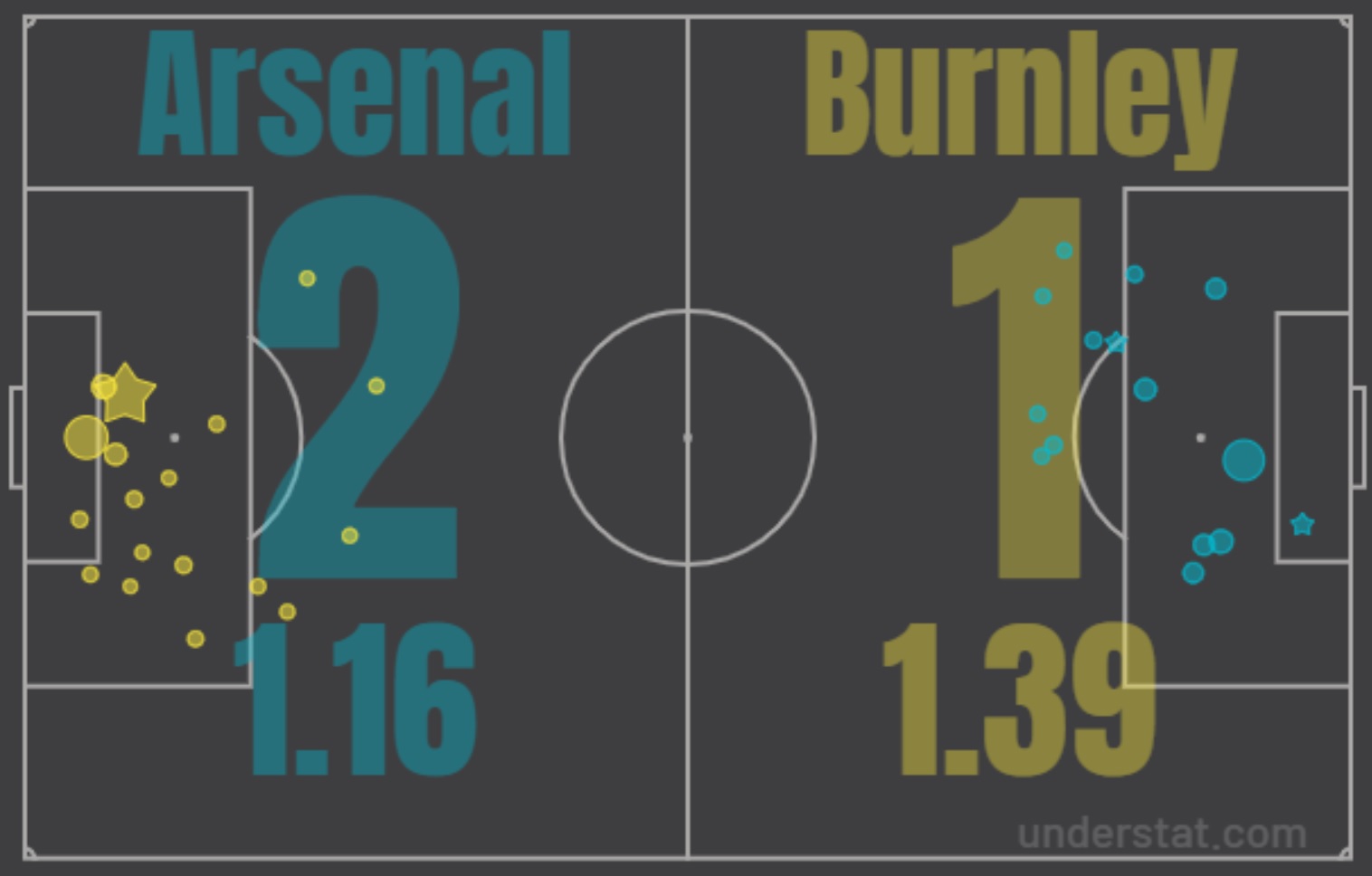 Burnley's long balls caused confusion and panic on a number of occasions, with Unai Emery's side failing to deal with their visitors' directness in possession. Unable to decisively win the first ball and clear their lines, Arsenal allowed Burnley to establish attacks high up the pitch fairly simply.

Even more concerning was the Gunners' inability to play out against pressure, particularly from goal kicks. Bernd Leno was signed in part because he represents the new breed of goalkeeper – sweeper-keepers who are comfortable in build-up – but some of his decisions, such as the one below where he chips a pass to a teammate in his own half surrounded by four opponents, were poor. 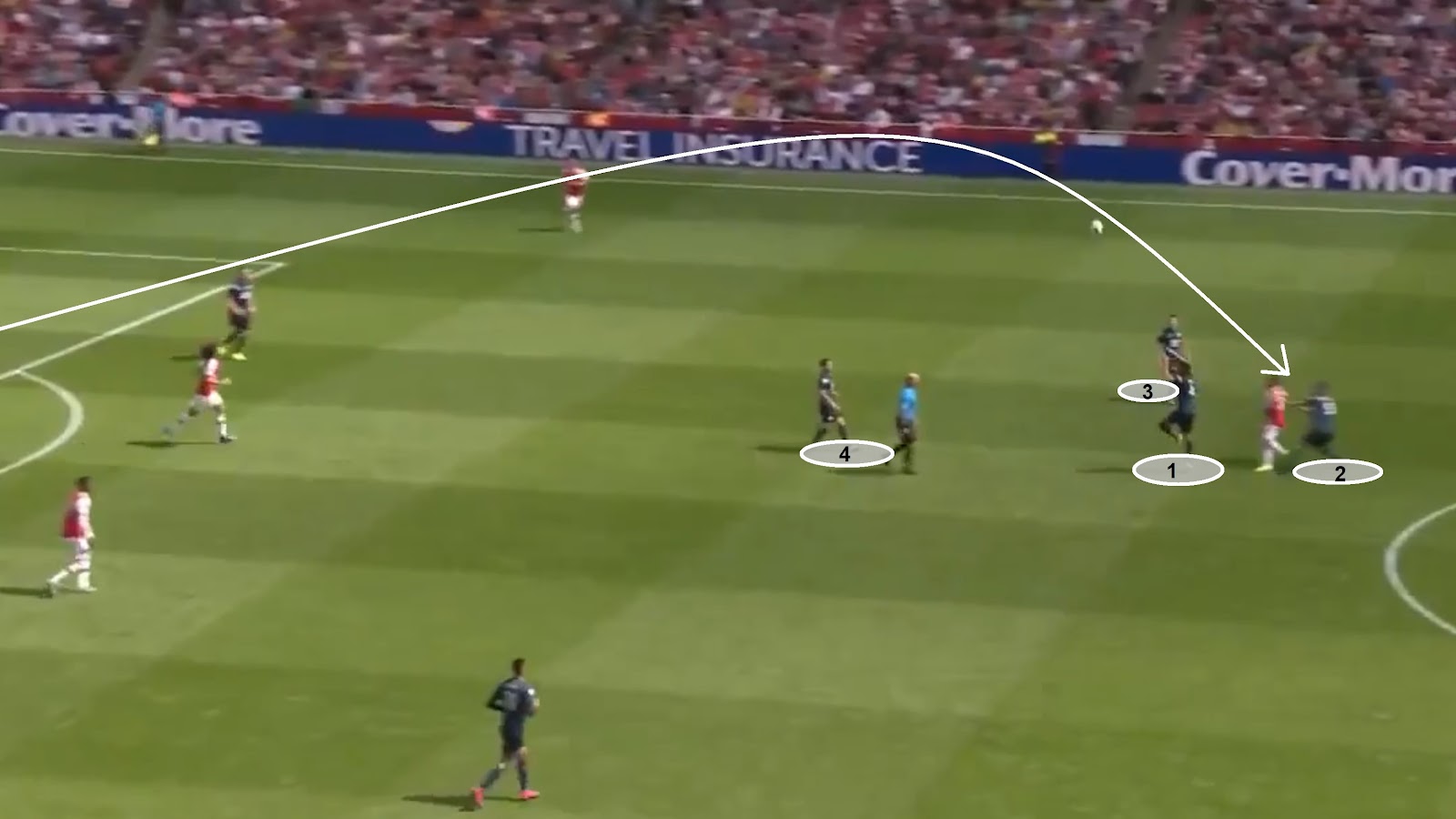 Tottenham may not be playing their best attacking football right now, but they remain an organised and adaptable pressing unit. Pochettino will have paid attention to Burnley's successes in pressing Arsenal build-up, and may want to implement a similar approach within his preferred 4-4-1-1 defensive shape, with Harry Kane supported by the more mobile Lucas Moura in applying pressure to David Luiz and Sokratis Papastathopoulos.

ARSENAL CAN COUNTER WAY TO VICTORY

Like Spurs, Arsenal generally line up in a 4-2-3-1 shape. However, away to Liverpool Emery deployed a 4-3-1-2 shape with a diamond midfield that focused on congesting the central zones and forcing the opposition wide. He may opt for something similar this weekend, with the aim being to destroy Tottenham's attacking hopes and set up counter-attacks.

Arsenal are dangerous in transitions thanks not only to the quality of player they have in attack, but the sheer pace in their frontline. Along with Pierre-Emerick Aubameyang, newly signed Nicolas Pepe brings real cut and thrust and allows them to break rapidly whenever they win the ball back.

The Spurs back line looks weak. As well as their aforementioned left-sided issues, they lack a genuine alternative to the potentially injured Kyle Walker-Peters at right-back. If Arsenal can defend well, they could aim to exploit this weakness on the counter to seal a huge victory and put an end to their rivals' faint title hopes.