Another Arsenal clearout: Is this good news or bad for the Gunners support?

COMMENT: This glass at Arsenal. Is it half full? Or half empty? Players leaving - coaches too, even legends. Is it case of clearing it all out to make room for something better? Or are some jumping ship before it all capsizes?

Well, we won't know until this summer window shuts. But in the meantime, the movement at Arsenal does suggest major changes are well underway - and at all levels of the club.

Take the positive route and the sudden departure of so many young players could be read as Per Mertesacker and Edu taking the broom and sweeping out space for a more talented group. Certainly, the buzz around Charlie Patino and Marcelo Flores would offer credence to the idea that room must be made for their development to not only continue, but accelerate.

The Gunners said farewell to three of their own this week: Trae Coyle, Mark McGuinness and Zech Medley. They weren't cut loose. All three had their next clubs organised, as McGuinness signed for Cardiff City, while Coyle with Lausanne and Medley with KV Oostende moved abroad. This news followed the axing of their U23 coach Steve Bould, so ending his 30-year association with the club.

But as we said, it can be argued room needs to be made. An upgrade needs to be established. That Mertesacker, the club's academy director, is in talks with England U18 coach Kevin Betsy, does suggest they've identified the former Fulham and Woking midfielder as Bould's replacement. Now 43, Betsy has been with the FA for five years as head coach of the U16s, U17s and U18s. And to be fair, he's done it the hard way. With his own charity in the Seychelles and a background in the sports media, Betsy would arrive at Arsenal as a well qualified and well rounded youth team manager. It's not insignificant that he'll often quote one of his heroes, Arrigo Sacchi, when discussing his playing background: “I never realised that in order to become a jockey you have to have been a horse first".

Above the U23s and more changes are now being seen. Not the least in Arsenal's spending. At time of writing, the Gunners had put a £45m bid - rising to £50m - in front of Tony Bloom for Ben White. And the Brighton chairman, as we're now hearing, is ready to accept.

To spend such an amount is unexpected from this Arsenal board. To do so for a player who is more potential than finished product is just about unheard of. White has a lot of promise. Has a growing reputation. And is a member of England's Euro 2020 squad. But all this is being judged on the one season at Premier League level. That Arsenal are acting so boldly is a change from the norm. 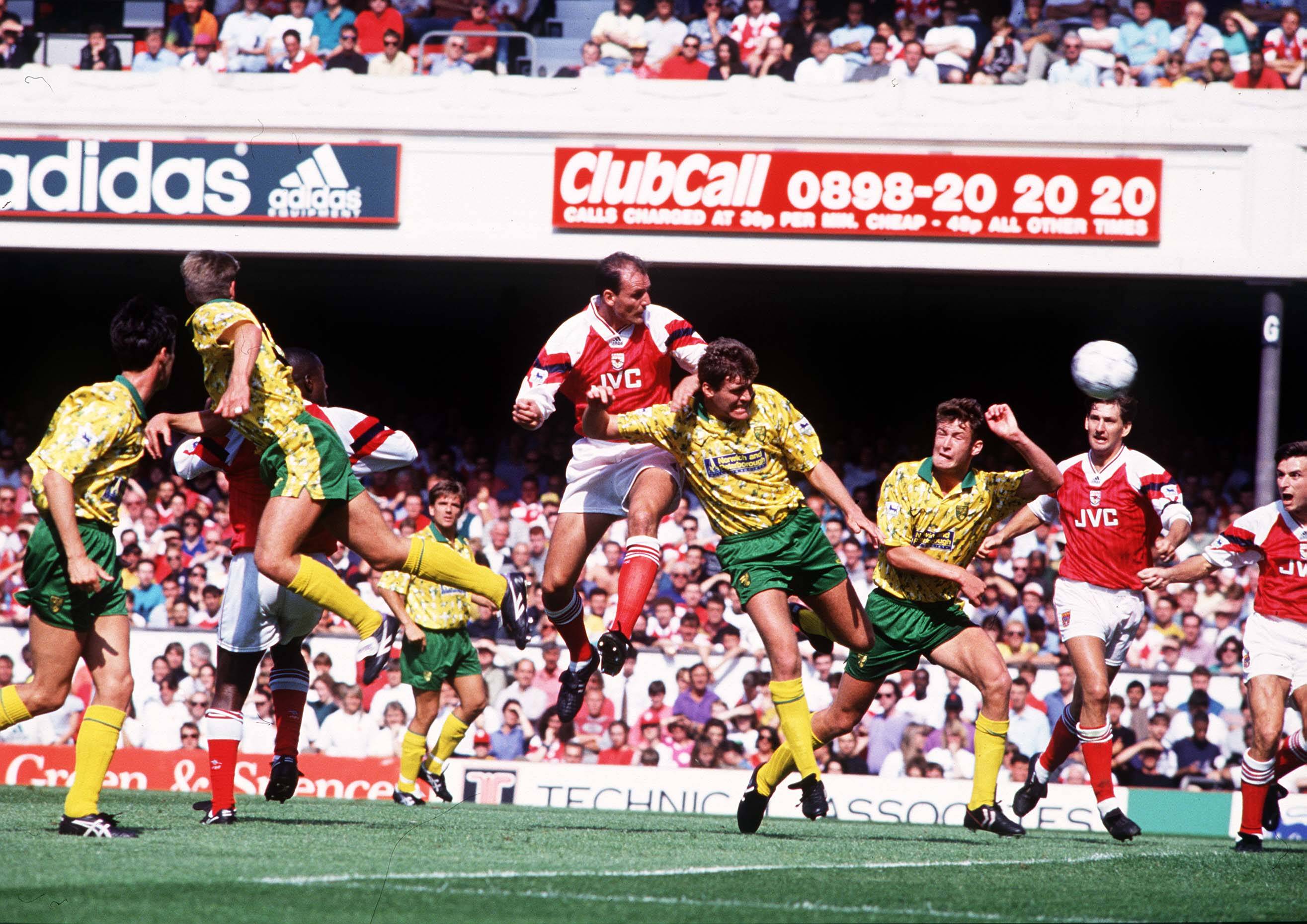 Steve Bould scores at Highbury against Norwich City in 1992

And it won't end with White. In Spain, they're convinced the Gunners have told Real Betis to name their price for Guido Rodriguez, their Argentina international midfielder. It's the same message relayed to Real Sociedad for Sweden's Euros centre-forward Alexander Isak. Stan Kroenke may not have released the shackles, but it does appear they've been significantly loosened this summer window.

A good thing? Of course. Edu, the club's sporting director, clearly has plans to strengthen the spine of the team. A young centre-half. A young centre-forward. And one of the stars of this month's Copa America to sit in midfield. No-one could argue against the addition of three such talents improving this Arsenal team.

But there could be ramifications. Indeed, there already are. And when you go beyond the surface, it is apparent that there remains major problems inside the club - and more that could be looming on the horizon.

The arrival of White has already had a knock-on effect with Dino Mavropanous effectively ending his Arsenal career this week. The Greece cap will return to VfB Stuttgart for the new season, but this loan arrangement includes a knockdown permanent option. Sven Mislintat, the former Gunners chief scout, negotiating a deal worth €7m. Barring an injury mishap, Mavropanous has played his last game for Arsenal.

But at least Mavropanous actually saw action. William Saliba is also ready to cut ties. Two years on the books. Yet to make a first team appearance. But in France, they see Saliba as the best of a generation. A future lynchpin of Les Bleus.

However, like Mavropanous, he's ready to look elsewhere. A successful six months with Nice simply confirming what he's always believed. Saliba knows he deserves better from Arsenal. He knows he's capable of being a first-choice there. That they've turned to White - spending 50m quid in the process - can only be read one way. How he's viewed by manager Mikel Arteta hasn't changed.

So he could go. Saliba could follow those U23s he played with over the first-half of last season. Again, dig a little deeper and there's more to that than a simple clearout.

We now know that Medley rejected Arteta's attempts to convince him to stay. We've also had word that England youth international Daniel Oyegoke did much the same, rejecting new terms to walk away. Then there's the talented goalkeeper Arthur Okonkwo, who made the bench for both legs of the Europa League semifinal against Villarreal. A new deal has been tabled, but nothing agreed. The 19 year-old could be another to cut ties next week.

And what of Bould? Why couldn't Mertesacker and Edu find a new role for him? What does it do to the club's fabric that another link to the Highbury generation has been severed? Perhaps more importantly, if it is to be Betsy - or someone else - why wasn't anything settled with the new man before Bould was dumped? You'd like to think a club of this stature will have their U23 coach ready and waiting for the players on the first day of preseason.

So swings and roundabouts. It's typical of today's Arsenal, isn't it? Depending on what type of Gooner you are, these changes either promise good things to come, or are masking deeper problems long ignored.

It's all about whether you see this glass at Arsenal as half full or half empty.