Liverpool great Rush on regular Salah chats: This is what we discuss...

Watch: Best of Wilshere in Arsenal training this week

Aimar? Insigne? Why James demise won't be end to flair players at Everton

COMMENT: For the type of player he is. For what he can offer his team. This has to be personal. Rafa Benitez simply doesn't want to work with James Rodriguez at Everton this season...

There's been no word from the manager regarding his No19's situation. He's dropped hints - without going the whole way. Instead, the Spaniard has let James do his talking for him, the Colombian conceding on a Twitch stream, so popular with South American players, last week that his future is unlikely to be at Goodison this new season.

"I don't know what's going to happen. I don't know – I don't know where I'm going to play," he said to his fans. "It's complicated. [I will play] wherever I'm wanted. Someone has to be at a place they're wanted."

Later via Colombian radio, we learned that Benitez had informed James face-to-face of his decision on the midfielder's first day back at Finch Farm. Any thought of winning over the new manager quickly extinguished.

For this column, this preconceived approach smacks of more than simply football. That Benitez was unwilling to give James the preseason to prove him wrong does suggest a personality clash. The pair also didn't see eye-to-eye during their short stint together at Real Madrid.

Talk of a change in direction. Of function over flair. It just doesn't ring true for Everton's new manager. Yes, he has a pragmatic reputation amongst most of English football's pundits, but look deeper at Benitez's record and you can see his admiration for players of James' type.

During his three years with Valencia, where he won two LaLiga titles and the UEFA Cup, Benitez leaned heavily on Pablo Aimar. A player similar to James if ever there was one, Aimar was a stand-out in that Benitez team. The Argentine never had his wings clipped and rewarded Benitez with some of the best football of his career.

Cycle through to almost a decade later and Benitez found another exciting, young trequartista in a 21 year-old Lorenzo Insigne. A local. Barely proven. Insigne was handed the keys to Napoli's midfield during Benitez's two years in charge and was key in their Coppa Italia and Champions League qualifying success. 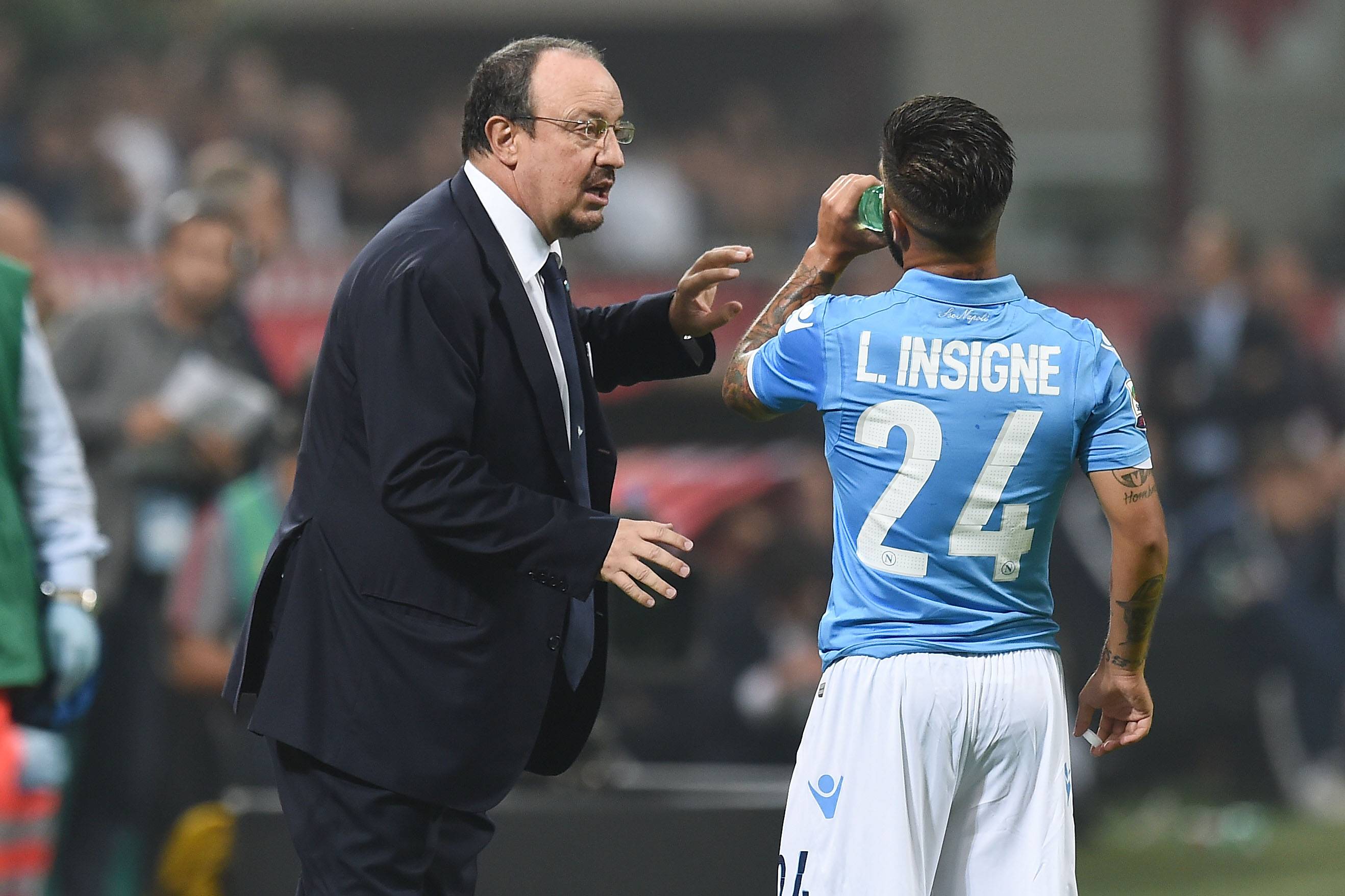 Benitez with a young Insigne in 2014

So history lesson over. But it does show that Benitez - if given the opportunity - will not only work with players of James' type, but build successful teams around such No10s. Why he can't see Aimar or Insigne in James, only he can tell us. But it must be said, after a year of acclimatising; a year where he did offer more than the odd flash of inspiration; it can be argued that Benitez is making a mistake not giving the Colombian a second chance.

However, perhaps the manager already has a replacement lined up? Perhaps this new Aimar or Insigne is waiting on the sidelines for James' departure? What we can say, contrary to some local opinion, is Benitez's system works best with a midfielder who can offer the 'fantasy', as the Italians put it, of an Aimar. And given the Spaniard's work in the transfer market thus far, you can see such a signing being made before this summer's window slams shut.

Demarai Gray and Andros Townsend have really set out the stall for this Benitez team. Two wide players. Great on the ball. With pace, energy. And capable of chipping in with goals. What's more, they arrived with barely an impression made on Everton's transfer budget. There is still something in the coffers should Benitez seek a direct replacement for James.

Certainly the impressions of Allan, who just missed Benitez's two seasons at Napoli, do suggest Benitez is eager to find that No10 - either inside the squad or in the market. Discussing the first weeks under his new manager, the Brazilian stated: “He is very active during training, always instructing the players to move and pass the ball better.

“For those of us in midfield, he always asks for us to keep it as simple as possible, two touches of the ball, always look to play forward... and to always have a compact line so we're prepared for all types of games."

'Win the ball. Play it forward'. In other words, get the thing and move it quickly to our creators. You can imagine Benitez, over his 20-plus years in coaching, banging this drum day-in, day-out on the training pitch. The clubs have changed. As have the players. But he has a proven system for success. And contrary to how he's been portrayed by some sections in the English football press, this includes working with flair players.

But if it isn't to be James, then he'll have to look outside. And you do fancy Benitez has long had a shortlist of names he's been keen to work with. Significantly, where such ambition was blunted on Tyneside, it'll be encouraged at Everton.

Despite the type of player he is. Despite what he can offer his team. James clearly isn't the right fit for Benitez. But given past success, that's not to say a No10 of similar qualities won't arrive at Goodison before the deadline falls.