AFCON: Six memorable moments from one of the best tournaments in a decade

Senegal receiving the African Cup of Nations title on Sunday at the Olembe stadium signified the end of one of the most exciting editions of the AFCON in the last decade.

A huge reason for this year's instalment being such a success is the presence of sheer star power in each nation's squads.

The likes of Sadio Mane, Achraf Hakimi, Mohamed Salah, Kelechi Iheanacho, Riyad Mahrez, and Kalidou Koulibaly all appeared in a bid to guide their respective nations to AFCON glory, and while Senegal went on to win the tournament, the players involved made it a tournament to remember.

During this showcase, there have been quite a number of ups and downs for the nations and their players. Some of these moments defined and decided the results of some matches while some had little to no impact. In this piece, we take a look at 6 of the biggest moments from the recently concluded AFCON tournament.

The referee ending the game before 90 minutes TWICE, Tunisia vs Mali

The group stage matches from Group F weren't as eventful as the ones from other groups but one particular game begged to differ.

The Tunisia versus Mail fixture was played on the 12th of January in the western city of Limbe.

This match could have ended with the most prominent events being the two penalties taken.

The first one being the 48th minute spot kick which Mali's Ibrahima Kone scored and the second being a miss from Tunisia's Wahbi Khazri.

At the time, spectators would've thought both penalties would determine the game's result without knowing far more bizarre events were about to unfold.

The first happened about 5 minutes from the end of the regular 90 minutes as Zambian referee Janny Sikazwe blew his whistle and stopped the game at the 85th minute mark with players and coaching staff quickly signaling the referee to spot his error and fix the situation. Soon after the referee supposedly made the required adjustments, he allowed play to continue.

Another bizarre blunder happened shortly after Sikazwe reduced Tunisia to 10 men. The referee ended the game yet again but this time with 89 minutes and 42 seconds on the clock. Tunisia's manager and backroom staff rushed on the pitch to attempt to show the referee his second blunder but this time he didn't restart the game.

After 20 minutes passed, the tournament officials decided the match would restart but both teams refused to come back on the pitch with the fans waiting in the stands. Eventually, Mali came out but Tunisia wouldn't budge on their stance of refusal and started making plans to lodge a complaint.

This drama overshadowed the remaining games played on that particular day in the AFCON and was one of the most unusual occurrences throughout the entire competition. 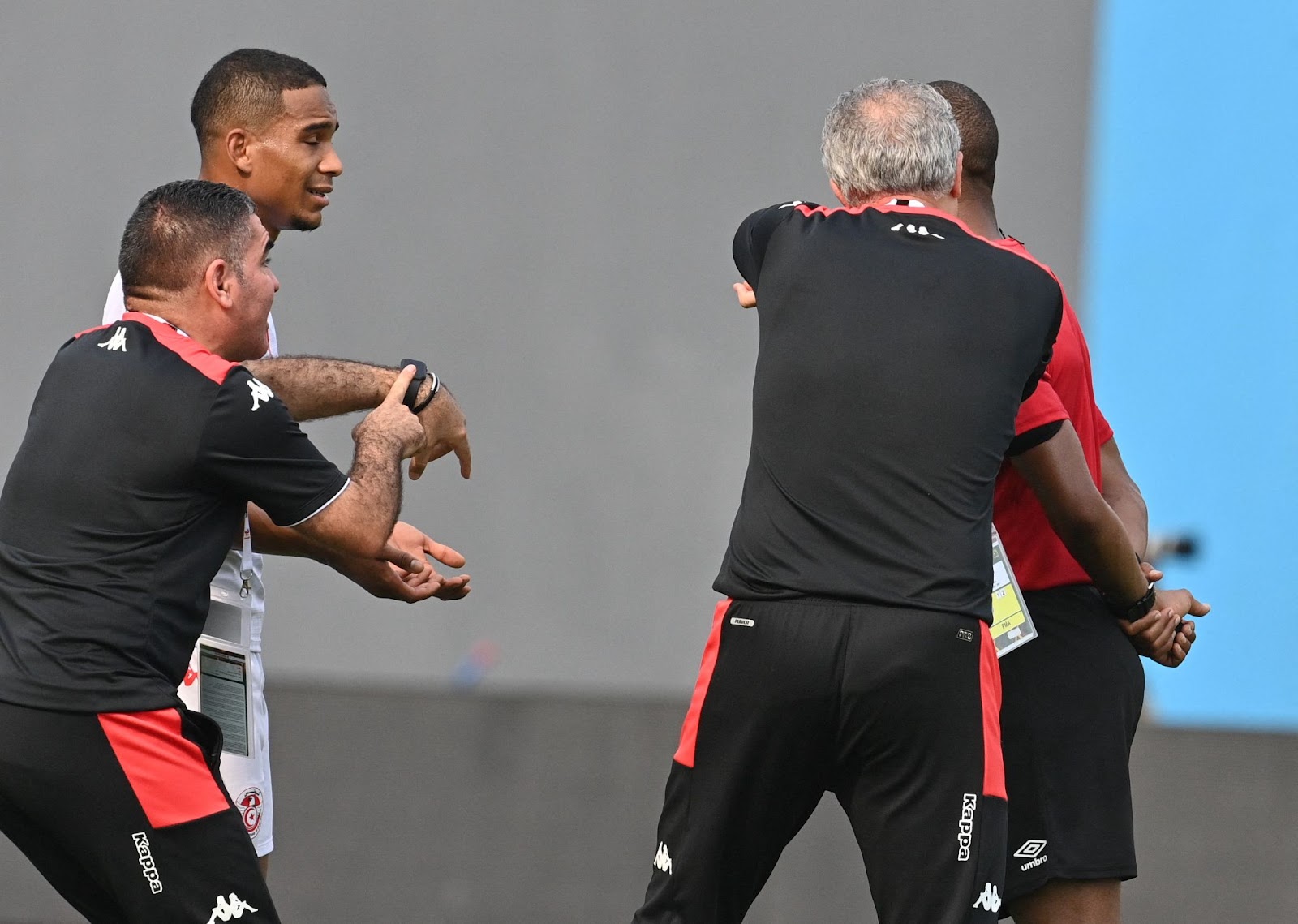 Sometimes it's rare and other times it's rampant but regardless of its frequency, goalkeeping errors can be a decisive factor in matches they occur in. This was the case in the Group E fixture between Ivory Coast and Sierra Leone.

The Elephants earned the lead from Sebastian Haller's goal early in the first half and entered the break ahead. Although Sierra Leone equalized 10 minutes after the break, Arsenal forward Nicolas Pepe ensured Cote d' Ivoire got their lead back.

The game went on to stoppage time with the scores standing at 2-1 and just when it looked like nothing else could happen, Badra Ali Sangre made a mistake he would prefer to be erased from his memory forever.

The 35-year-old goalkeeper made a claim to the ball in his box after his own defender headed the ball in his direction but he fell awkwardly right after which made the ball come loose from his grasp and allowed Sierra Leone to grab a draw from a match that seemed sealed just seconds before the error. 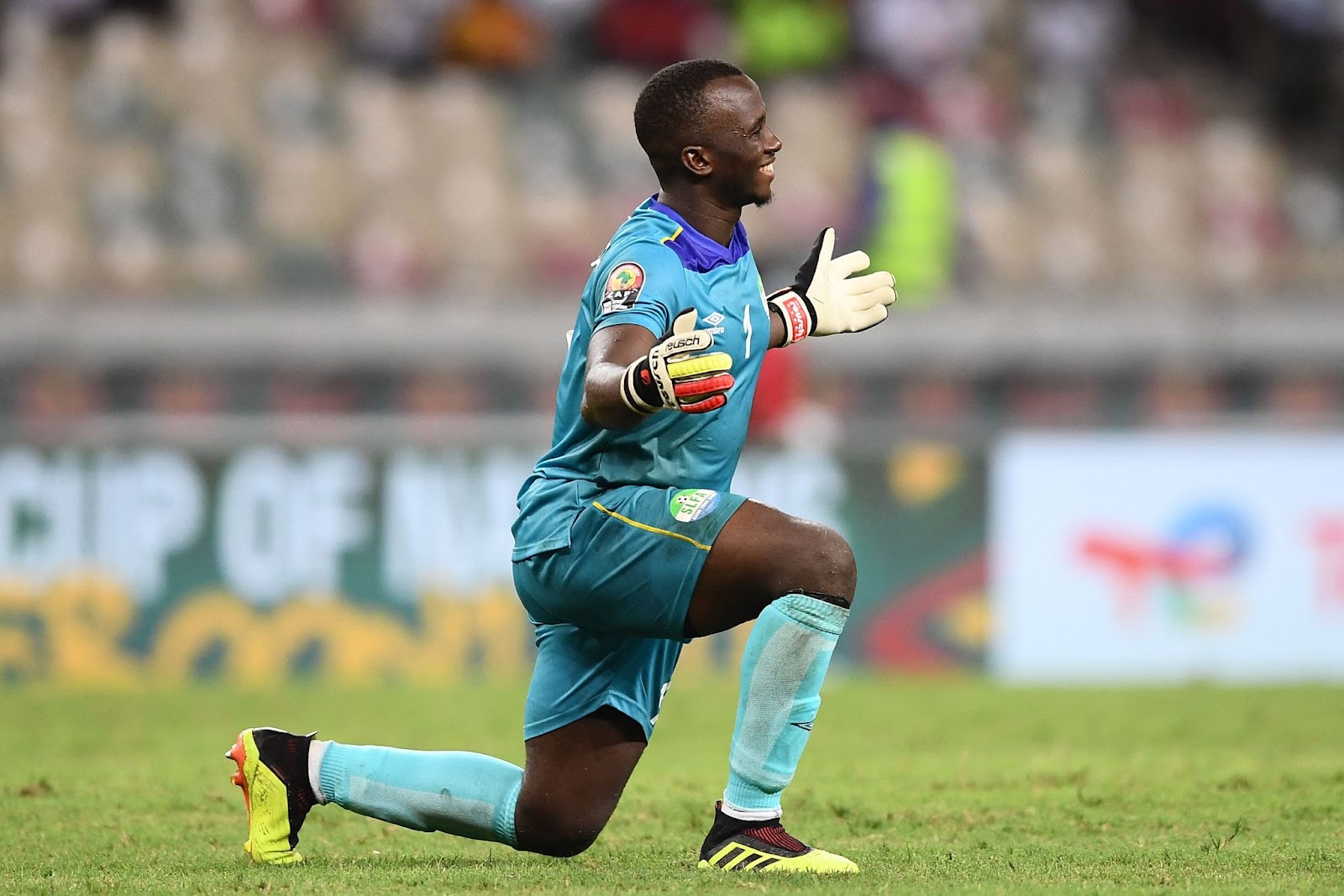 The final game of the AFCON was played on Sunday and it had the world's attention in Cameroon. Liverpool wingers Sadie Mane and Mohamed Salah were set to have statement performances during the game to increase their country's chances of lifting the trophy. Everyone paid them full attention but the eventual man of the match was a player no one expected at all.

A 33-year-old Zamalek goalkeeper stole the show by producing one of the finest goalkeeping performances in recent continental tournament history. Mohamed Qotb Abou Gabal Ali also known as Gabaski made 8 saves in the final match including a penalty save from Senegalese talisman Sadio Mane.

Since the match went on to extra time and a penalty shootout, Gabaski ended up making an extra save in the penalty shootout. These heroics helped him win the man of the match award but from his tears during the post-match award presentation, it is certain Gabaski would trade the award for the AFCON title itself. 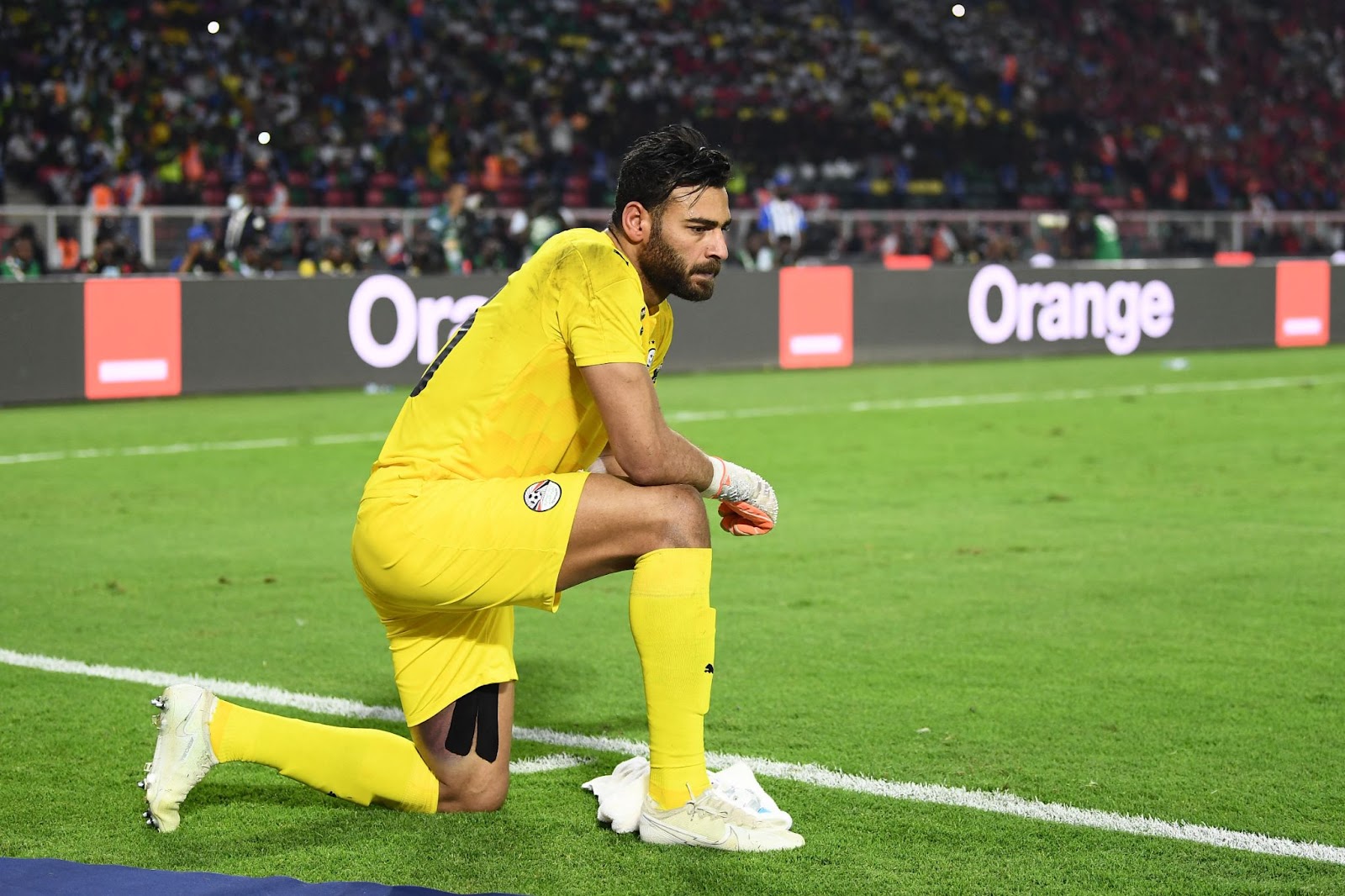 It is rare for a game to have two red cards in 90 minutes let alone both cards being awarded to the same team. This is exactly what happened in the Round of 16 fixture when Senegal played Cape Verde in on the 25th of January.

Cape Verde were down to 10 men early on in the first half after Patrick Andrade made a bad challenge on Pape Gueye with his studs up after just 20 minutes. The remaining 70 minutes of the game were already going to be challenging enough for Cape Verde but they made issues worse for themselves in the second half.

In the 57th minute of the match, Vozinha was sent off for a dangerous clash of heads with Sadio Mane. It was after a VAR check that the referee decided the challenge was reckless and awarded Vozinha a red card. Beyond the reduction to 9 men, Cape Verde played fairly well and must have left spectators wondering if the game's result could have been different from a 2-0 Senegal win if Cape Verde didn't collect any red cards. 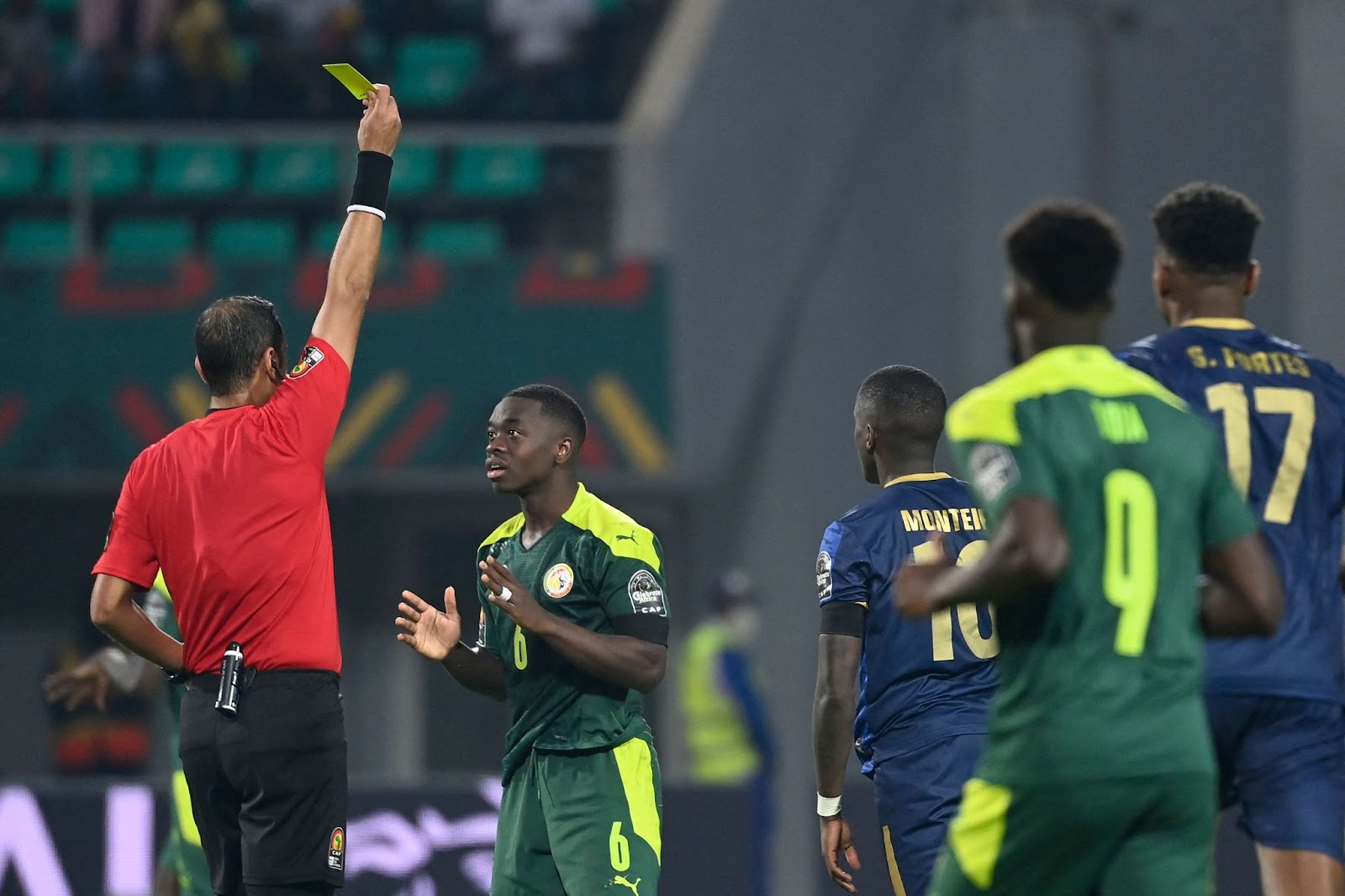 Not a lot of us knew Mauritania changed their national anthem in 2017 and that includes the audio operator at the Mauritania vs Gambia match.

At the beginning of the match where the teams lineup to recite their nation's national anthem, the Mauritania players were caught by surprise after they had to stand through their old national anthem being played three times in a row.

The players were asked to sing the new national anthem without music which they refused.

Team captain Aboubakar Kamara's frustration must have increased after watching Gambia's national anthem get played without any issues. Although the match got on without any further problems, the anthem mixup at Africa's premier tournament will be fondly remembered. 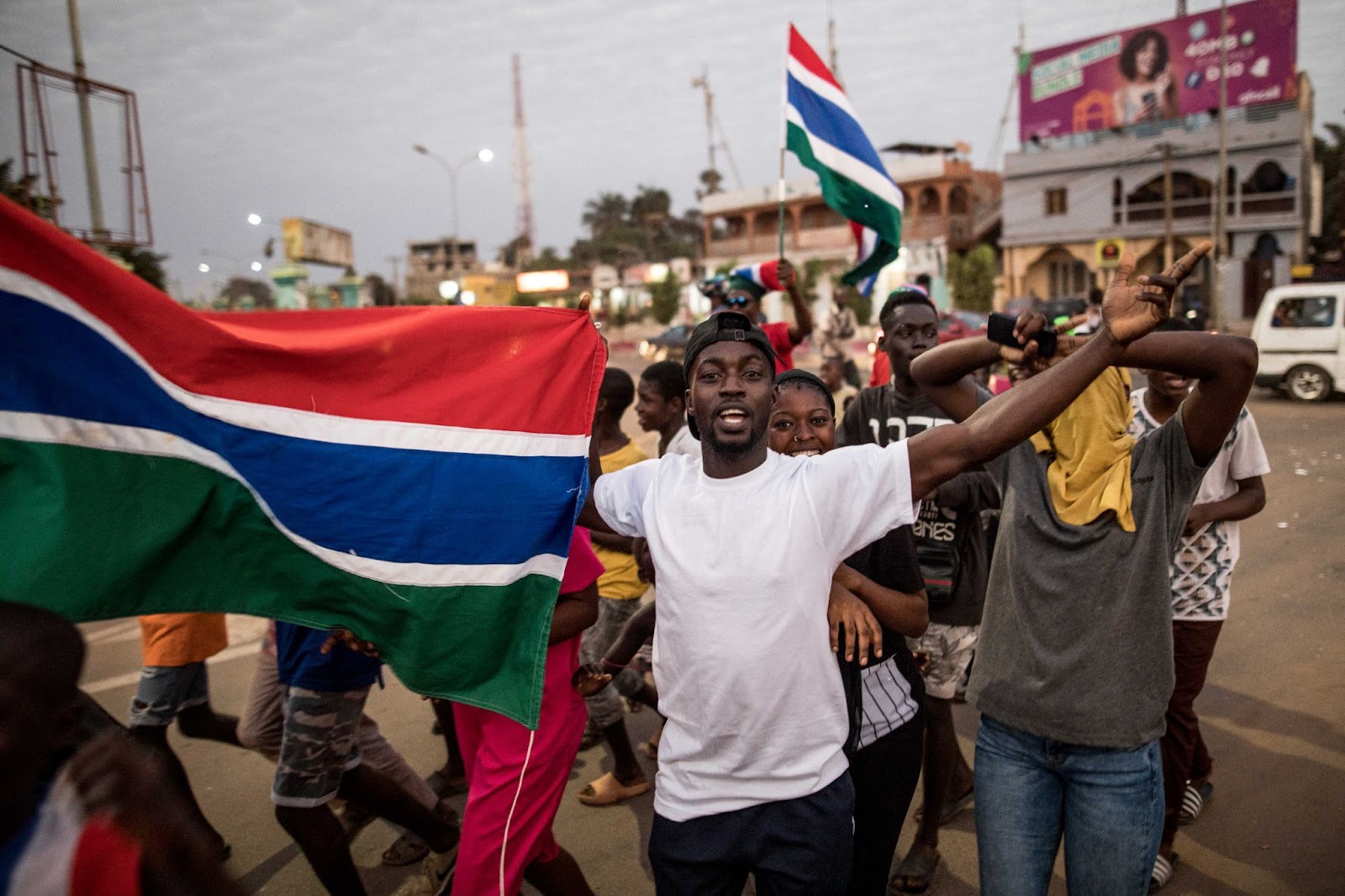 Vincent Aboubakar's appearance At the final match, Senegal vs Egypt

One of the spectators of the final match of the tournament was Cameroon striker Vincent Aboubakar. The striker's appearance was met with a lot of theories as to why he came to watch the game.

Football fans on social media especially Twitter joked about how he came to root for Senegal because of the comments he made about Egyptian talisman Mohamed Salah just a few days before the final match.

He made these comments before Egypt knocked Cameroon out of the tournament in the semifinals.

But as much as it would make quite the story if Aboubakar actually attended to support Salah's opposition, the most likely reason is that the striker was at the game to pick up his golden boot at the tournament award ceremony that happened just after the match. 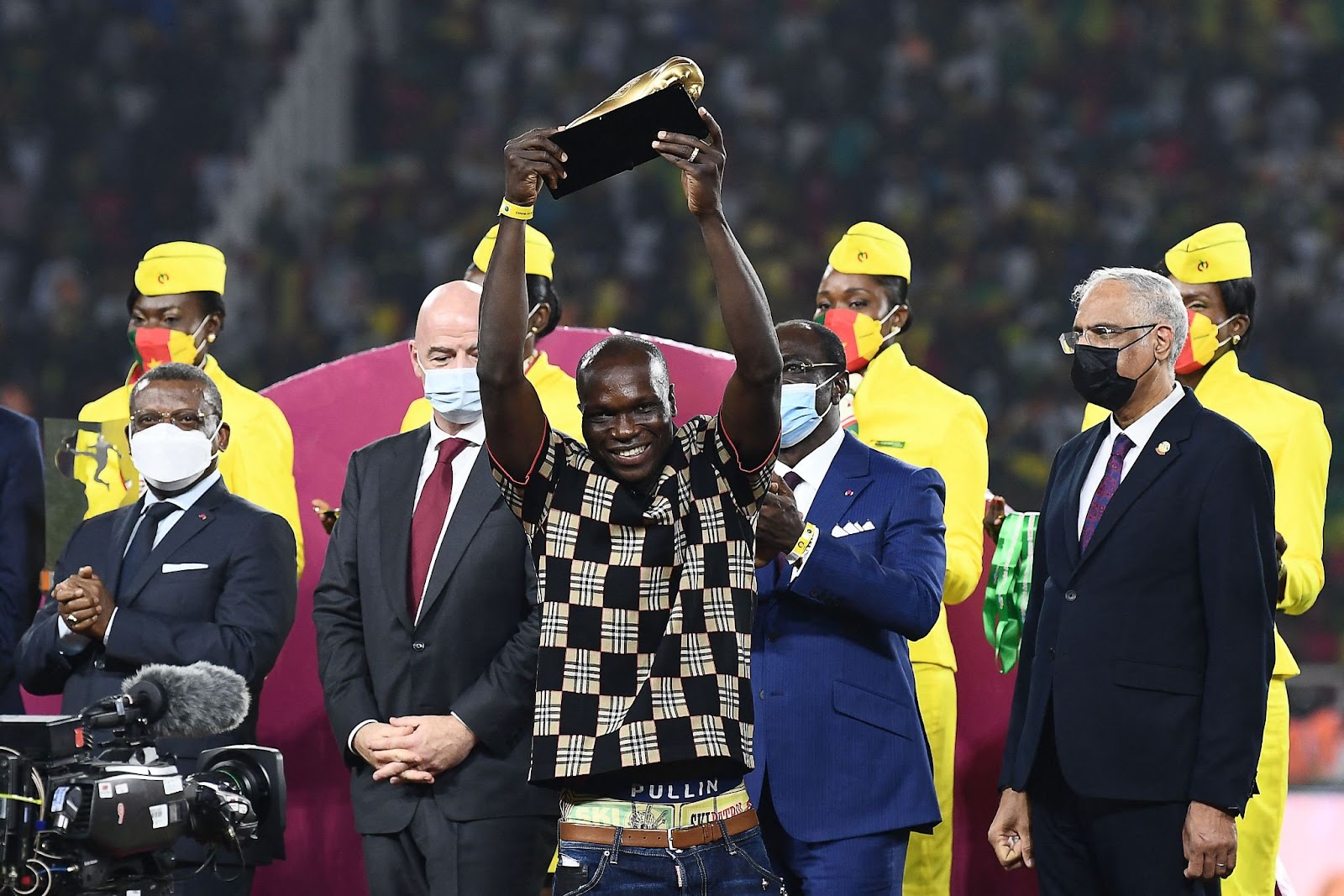