Rooney warns England: Euros can't be won without these 2 players

COMMENT: So we know Ole Gunnar Solskjaer feels his attack is short. And we know where the Manchester United manager is desperate to strengthen. But after the revelation of the past few days, it must be time for him to think more about that position he wants solved rather than the personality he sees solving it...

Not once. Not even twice. But four times. Four times did United go knocking at Borussia Dortmund's front door for Jadon Sancho this past summer. And four times they suffered rejection. So says Jan Aage Fjortoft, the former Middlesbrough and Norway striker, now a long-time popular Bundesliga pundit.

In his own words, Fjortoft is one for "the drama", but he is also known for accuracy. And if United tried to land Sancho with four offers - starting at £50m and ending at just over £91m - during this past summer market, you can be sure it's information Fjortoft has received directly from a BVB source.

Of course, United's summer campaign ended in a rush. And a positive one, at that. Edinson Cavani, the former PSG centre-forward, was ushered through the door. Then came the wingers: Facundo Pellistri, from Penarol, and Amad Diallo, of Atalanta - though United will have to wait until January to see the latter as they thrash out his work permit application.

But Pellistri and Diallo are strictly ones for the future. Project players. Wingers, sure. But not for the here and now. Instead, as Fjortoft attests, that wide role was destined for Sancho.

That United were pursuing Sancho is nothing new. But what Fjortoft's revelation signifies is that this United team still aren't playing as their manager wants. And it's not about form. Nor experience. But players. A certain type of player. A winger. A winger with pace, power and crossing ability. Something this current United squad doesn't boast.

We've used this quote before and it still, almost two years later, sticks today. Solskjaer, after victory at Wembley against Mauricio Pochettino's Tottenham, basically set out his game plan.

"We've got the best goalkeeper in the world. We've got blistering pace...," he declared, referring to David de Gea's performance on the day. A great goalkeeper and blinding pace on the flanks. This is ultimately where Solskjaer wants to take this team.

More from the Norwegian during that time, "We like to run at people and take them on. We like to frighten people."

Andrei Kanchelskis on the right-side. Ryan Giggs and Lee Sharpe on the opposite. The manager, himself, playing through the middle. This is how Solskjaer sees his attack. But for the moment, he doesn't have the tools to put it all in place. 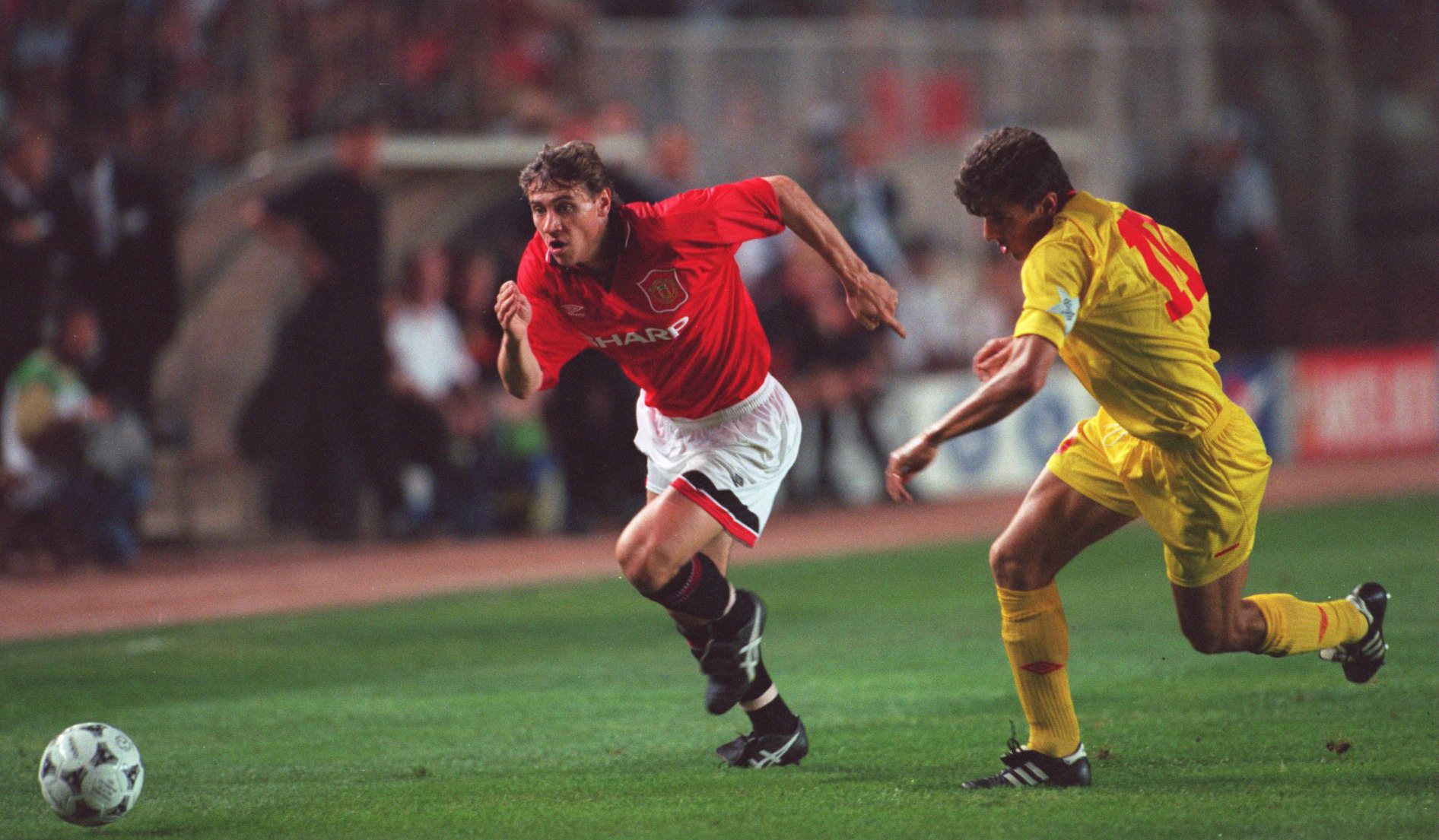 We've talked about the No9 defining Solskjaer's work in the transfer market. We've talked about the foundations created by the arrivals of Harry Maguire and Bruno Fernandes. But if there's one player who will exemplify Solskjaer as a manager in the traditions of United, it will be his first - and perhaps also his second - senior wing signing. He's already set his course with the additions of Diallo and Pellistri. And Solskjaer would've been counting on more from Daniel James by now. But it's clear where he wants to take this team. Pellistri and Diallo are for the future. Sancho, as it was planned back in May, was to make the impact for the here and now. But Dortmund hadn't read the script.

And to be fair, Sancho also didn't play ball. Which is why Solskjaer, his staff and Ed Woodward, the club's vice-chairman exec, need to think long and hard about returning to BVB with a fifth proposal.

United are doing all the running in this one. Sancho has shown no willingness to push things along at his end of the table. It may've been messy. Even wrong. But you could never accuse Ousmane Dembele of not doing all he could to help Barcelona sign him three years ago. Even Henrikh Mkhitaryan, though not to the extent of Dembele, did what he could to force through his move to United a year previous. In contrast, Sancho has sat on the sidelines passively as United have pushed his club to sell.

Should United be putting themselves through this? Is Sancho worth the trouble? If he was the be-all-and-end-all, the answer would be a positive. But there's alternatives available and out there worth considering. Players of the same age. The same experience. And the same potential. And perhaps, if knowing United were keen, they would be doing a helluva lot more to make the move happen than Dortmund's No7.

Among those alternatives is Adama Traore, Wolves' explosive, all-action attacker. Pace. Power. And an end product. Adama boasts all the qualities fitting a United winger. Plus he has the required backstory of rejection, then redemption, which Solskjaer - and his No2 Mike Phelan - like to see in any transfer target they're considering. Indeed, there's many inside the English game closely watching how Sancho handles his current form slump. Bouncing from Watford to Manchester City and now with Dortmund, the trajectory of Sancho's career has always been on the upward scale. The England international is now in unchartered territory. Struggling for touch. Watching younger players, like Gio Reyna, threaten to surpass him. He's never been in this situation before. There's many from England with a keen interest on how he tackles such circumstances.

For Adama, there is no such concern. He's been there. Done that. And has the t-shirt. Well, at least three - Barcelona, Middlesbrough and Aston Villa. Now he's seeking a new deal to go with his new status as Spain's bright, new thing. But Wolves are stalling.

In Spain, at least in Cataluyna, it broke last week that United are indeed watching developments. And there's some credence to the story: Adama is handled by a Spanish management team. Maybe it was his representatives making the first move - via the Catalan press. But either way, United now know Adama is keen. And on the pitch, he has everything Sancho has. A player to lift the team. To light up the fans. And one in the very best traditions of a George Best, Steve Coppell or Ryan Giggs.

Which is what Solskjaer's team are currently missing. Throwing everything at Sancho has left United short. But there's alternatives available and via news from Cataluyna last week, eager to talk. The solution to this problem doesn't need to be one single personality.