COMMENT: Tammy Abraham and Chelsea. One thing he can be sure of, if he does decide to jump, there'll be plenty of clubs waiting to catch his fall...

But does he jump? Should he? After all, turning 24 years of age this year, if Abraham sees himself as a player capable of winning trophies. A player to compete at the elite end of the game. Then he and his support crew must know that competition - tough, relentless competition - will always be part of his professional life.

The story broke this week that Abraham had dropped any thoughts of entering new contract talks with Chelsea. A change of manager. Potentially a change of status. It's rumbled the England international. And exacerbating the problem was press talk of a new £250m summer spend by Blues owner Roman Abramovich - with Borussia Dortmund's centre-forward Erling Haaland top of the shopping list.

With his deal up in 2023, Chelsea's managing director Marina Granovskaia is keen to start laying the groundwork for a new extension. But as it stands, Abraham is now having second thoughts.

Sitting in Abraham's corner, you can understand the upset. He's held up his side of the bargain. Building on last season's outstanding first full campaign with the Blues, Abraham is Chelsea's top scorer this season. He's picked up the slack as big money arrival Timo Werner has struggled in front of goal. He's kept Chelsea in the hunt for a top four finish and another run at the FA Cup final. In a team which has seen a manager sacked, Abraham can't be blamed for having any type of influence on Frank Lampard's demise.

Yet there are doubts. One goal in five Champions League games this season is a concern. And that he's found the back of the net once under new manager Thomas Tuchel is doing him no favours. Indeed Tuchel - as he did with Callum Hudson-Odoi on the weekend - did little to protect his No9 during the same game against Southampton. It was largely missed as we all focused on the German's substitution of his young substitute, but he also was quick to point out in the aftermath that Abraham had suffered the hook at halftime. 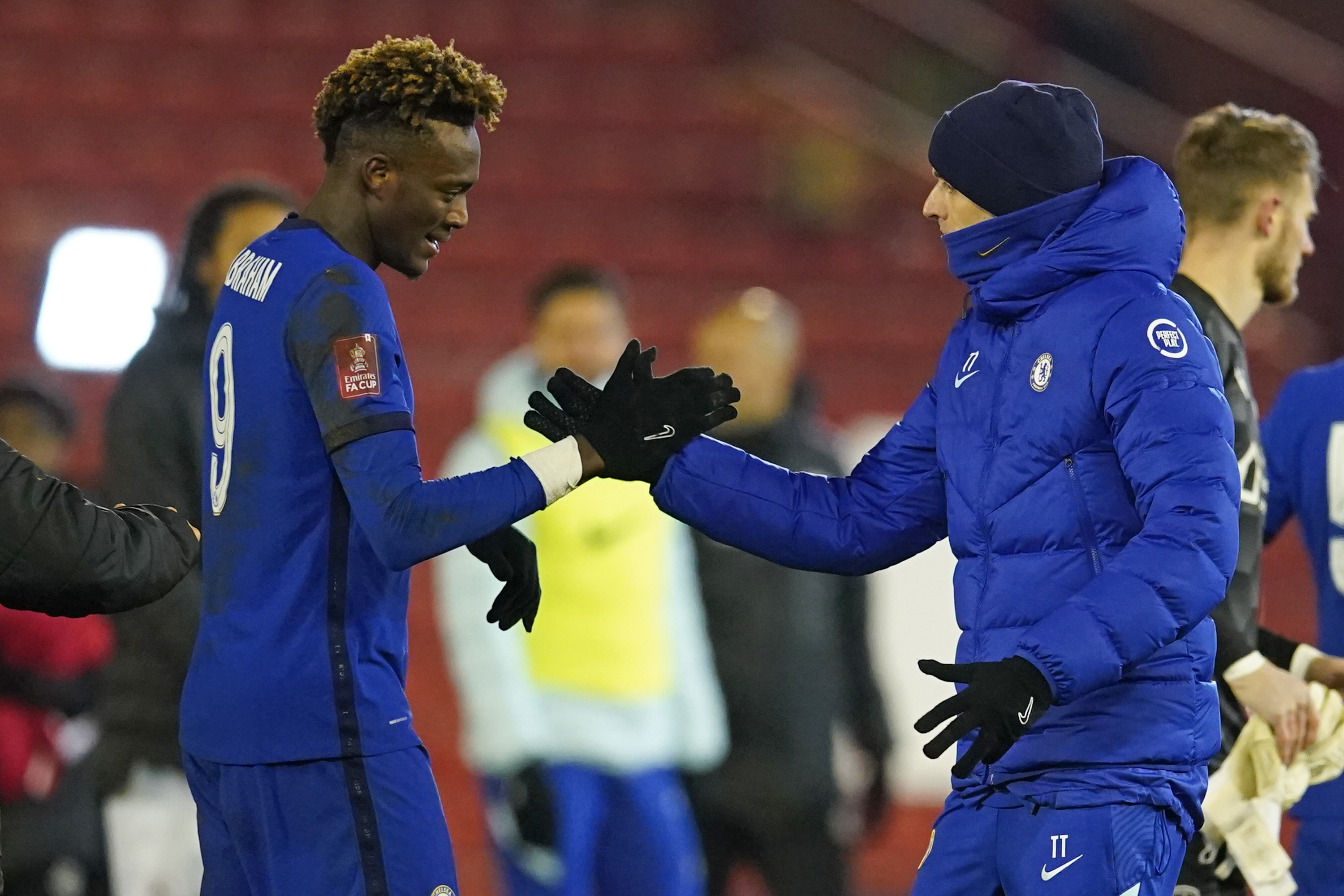 Abraham and Tuchel together after scoring against FA Cup opponents Barnsley

"(The substitution was) not from injury," insisted Tuchel, rejecting the chance to run media interference for his young forward. "It was hard for him to show his quality and we weren't happy with last 20 metres and he could not put his stamp on this game so we changed the formation."

So no Prem goals under Tuchel. Hooked at halftime in his last game. As we said, you can understand doubts now besetting Abraham and his camp. But should this be enough for him to simply cut and run?

A proven Premier League goalscorer. An England international. Not yet 24. Abraham would have his pick of clubs should he let it be known he sees his future beyond Stamford Bridge. But those clubs, where he'd be guaranteed a regular game - no matter the performance - would be a step down from Chelsea. Indeed, for the player he is - and the potential he still has - it'd also be a step down for him. Of course, a move sideways could happen, but he'd still find himself in the same predicament that he's in today. He'd be moving to a club with a pool of top class strikers for the manager to choose from. He'd have to compete. Perform. And he'd to have to accept rotations. The challenge will always be there.

For this column, Abraham should take a deep breath and focus on what he has. Yes, he's lost an ally in Lampard. But there's nothing in the early weeks of the Tuchel era to suggest the same relationship can't be established with the German.

Mason Mount is proof enough of that. Dropped for Tuchel's opening game, the draw with Wolves, Mount has not only found a way to win over his new manager, but he's become the first name on the team sheet. Hudson-Odoi, just days after the humiliation at St Mary's, was starting in the victory over Atletico Madrid in Bucharest. Tuchel is still feeling his way through all this and his process - clearly - includes testing the mettle of his players.

The sudden snub of Mount was met with a reaction welcomed by Tuchel. The hook for Hudson-Odoi... again produced the desired response. None of his camp went running to the press. There were no threats of a transfer demand. It was all very low key. And the player's reaction in the days leading up to Tuesday night was enough for Tuchel to go with his England international again at wing-back.

Glenn Hoddle, the former Chelsea manager, nailed it when discussing Hudson-Odoi's situation on the south coast. Tuchel was testing him. Feeling him out. Wanting to see what sort of response he'd get.

"It'll be interesting to see if Hudson-Odoi takes it on the chin and tries to prove him wrong," declared Hoddle. "He's given him a test. (But) not in the way I would personally do."

Clearly, Hudson-Odoi passed that test. And it's a test that Tuchel is currently putting all his players through. The rotation of his goalkeepers. The recall, then removal, of defenders like Kurt Zouma. He's learning more and more about those he's inherited from Lampard.

Even his German pair, Kai Havertz and Werner, have been warned: “My job is to win games, not to put some expensive guys together; I absolutely don't agree.

Indeed, as we've mentioned in a past column, Tuchel is no chequebook manager. Even with the limitless transfer budget of PSG, Tuchel still found a way to introduce and support a raft of local talent over his two years in charge. Haaland might be coveted by Tuchel and Chelsea, but that doesn't mean there won't be room for those willing to "fight for it".

Abraham is no Robinson Crusoe in all this. But with his minders running to the press this week, you fancy he's just scored an almighty own goal. If Tuchel was testing his centre-forward. If he was seeking a reaction. This wasn't the one he'd have hoped for.

No doubt those representing Abraham are fielding calls from across Europe after this week's story. And if he does choose to jump, there'll be plenty of clubs ready to catch his fall. But if any are at Chelsea's level, Abraham will quickly realise that tough, relentless competition never goes away.