Real Madrid to offer Hazard to Liverpool in talks for Salah

A mix between Ozil & Aubameyang: How Pepe will improve Arsenal tactically

To seal his signature, the club reportedly paid £72 million – around £15 million more than they paid to sign previous history-maker Pierre-Emerick Aubameyang last year.

The transfer was the latest step up in a career that is moving extremely quickly. Only two years ago, Pepe was playing for mid-table Ligue 1 side Angers. He then enjoyed two positive seasons with Lille, helping them to a second-place finish behind Paris Saint-Germain last term before arriving in the English Premier League this month.

Big things are expected of the attacker, and here we profile exactly what he will bring to Arsenal from a tactical perspective.

Under the management of Christophe Galtier – who is perhaps one of the most underrated coaches in Europe today – Lille played in a 4-2-3-1 system last season that saw Pepe operating on the right-hand side. The Ivorian formed an exciting attacking midfield trident alongside Jonathan's Ikone and Bamba, with whom he rotated, interchanged and thrived within a fluid system.

Lille's full-backs would overlap, which allowed Pepe to come inside from his right wing position and play in the inside right channel. From here he had freedom of expression, and would often wander into more central or deeper areas to receive from the centre-backs and make things happen without so much pressure on him or combine with teammates in the final third.

It was noteworthy that 42% of Lille's attacks came down the right side – only one French top-flight team, Marseille, attacked more down the right. This helps to underline the influence that Pepe had on the way his team played – Galtier tried to get him on the ball as often as possible, and with good reason. 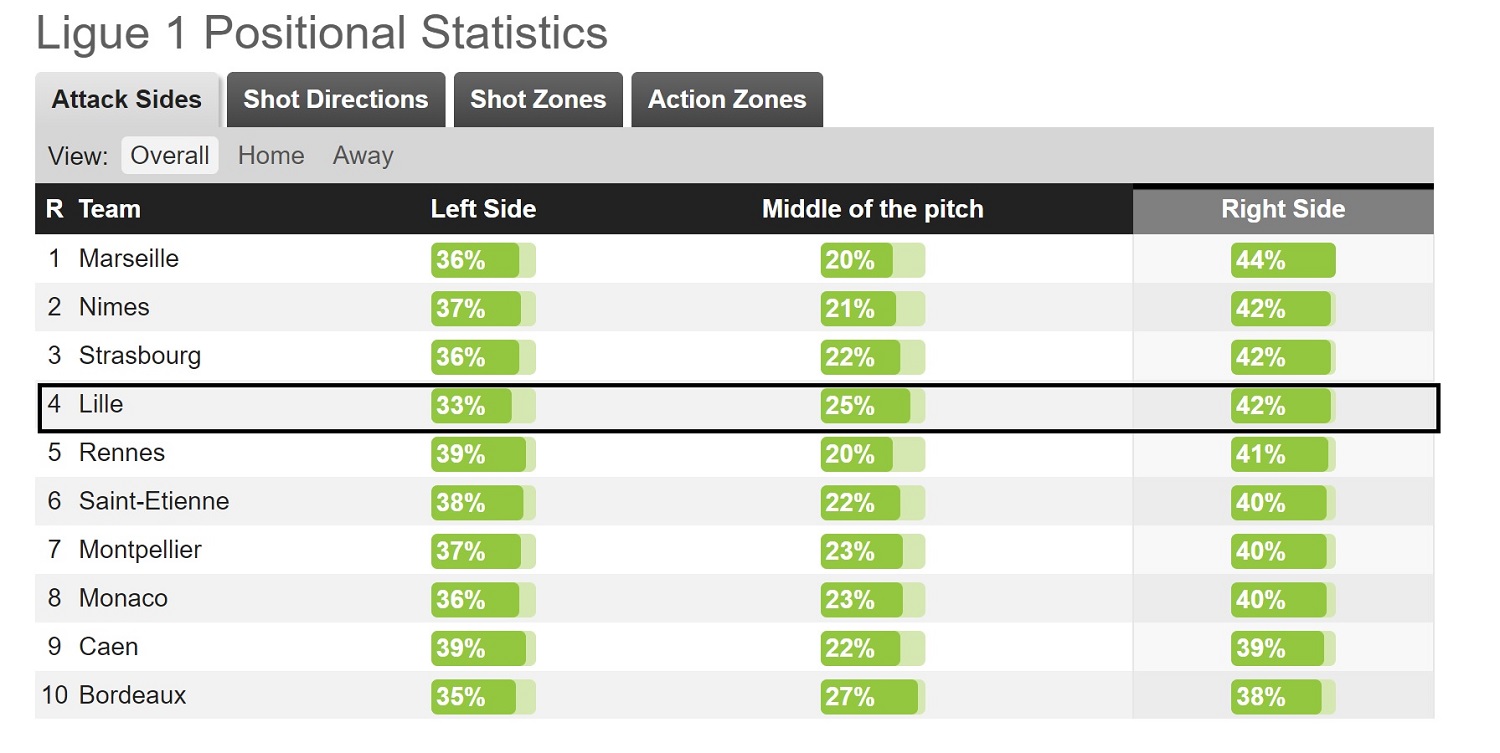 For all their quality attacking play, Lille leaned fairly heavily on Pepe when it came to making and taking chances. Indeed, with 22 goals and 11 assists, he contributed directly to 33 (that's 48.5%) of the team's 68 total league goals.

HOW WILL HE HELP ARSENAL?

Behind Pepe's impressive numbers are a variety of important attacking attributes that can help Arsenal to break teams down. One of the most apparent qualities in the 24-year-old's weaponry is his ability to bamboozle opposition defenders. Standing tall at 6ft, he isn't easy to put pressure on, but it is his technique – not his physique – that makes him difficult to stop, and leads to opponents fouling him. He possesses a vivid imagination, excellent dribbling skill, and a unique unpredictability.

Making his home debut in the recent 2-1 win over Sean Dyche's resolute Burnley outfit, Pepe made a fool of respected centre-back Ben Mee with a quick twist and nutmeg that took two defenders, including Mee, out of the game. Then, later on, he showcased his trademark dribbling routine from out wide: standing still with the ball at feet, enticing pressure from an opponent, then using quick footwork and deceptive body movement to get beyond his man. 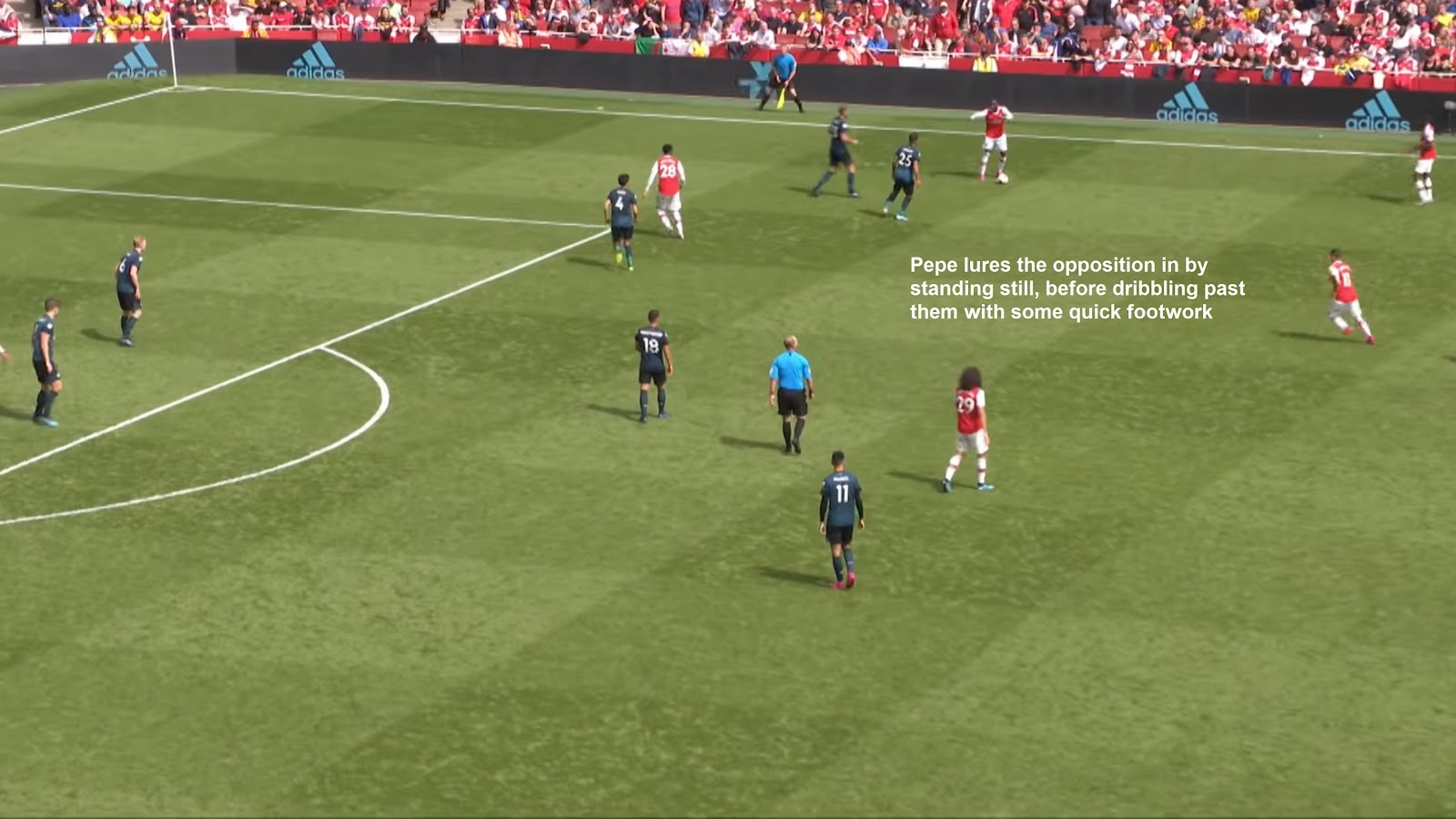 One versus one, Pepe is a highly effective attacker. Out wide, in isolation, he represents a tough task for any opponent to stop. And in more congested central areas, he can rely on his height and strength to shield the ball and his trickery to feint his way out of trouble. In addition, he is a serious threat on the counter-attack – whenever Arsenal regain possession, he will offer an instant option in transition with fast breaks into space.

In many ways, he is a halfway house between two of Arsenal's best attacking outlets – Aubameyang and Mesut Ozil. He has the capacity for searing past opponents that Aubameyang has, and he has the ability to deceive of Ozil.

Unai Emery lined Arsenal up in 4-2-3-1 or 3-4-2-1 systems during his first season at the Emirates Stadium. Pepe, having played in a similar shape at Lille, is a natural fit for the former setup. In this formation he could start on the right wing, with Ozil or Ceballos in the centre and Aubameyang or Reiss Nelson on the left.

But having also signed David Luiz, there is a possibility that Emery will opt for the 3-4-2-1 system more often this term. Luiz is at his best in the centre of a back three, with two more defensively sound players on either side of him. In this arrangement, Pepe could play as one of the inside forwards behind Aubameyang or Alexandre Lacazette up front.

A record transfer fee comes with impossible expectations, and Pepe will need time to settle in London and make his presence felt. However, once he has adapted he should improve Arsenal's attacking output.