Mason Greenwood proved his importance to Manchester United, while Thomas Tuchel unveiled Chelsea's season tactical plan in the latest round from the new Premier League season. Here's five key lessons from the weekend:

Naturally Liverpool dominated possession after Reece James's first-half red card and Thomas Tuchel has been praised for the defensive organisation of his deep-lying 3-5-1 to see out a draw. But in actual fact Chelsea were already playing in a similar style, albeit with a more aggressive, confrontational, and sharply counter-attacking slant. On Saturday evening we learnt that Tuchel will continue to use a conservative setup for six-pointers.

Prior to James's red card Liverpool held 62.7% possession and Chelsea attempted just four tackles in the opposition half. It was an even game, and one played at a high intensity, but Chelsea had a clear reactive game-plan: keep things compact in their own half and then counter quickly in the spaces behind Liverpool's high midfield. Kai Havertz and Mason Mount kept close to Romelu Lukaku to make a narrow front three that was hit regularly with sharp vertical passes.

As for Liverpool, this game was further proof they are approaching their 2019/20 level again and should challenge for the title. Harvey Elliot has added impetus through midfield, helping to raise the tempo of their performances, while the Anfield crowd - plus the return of Virgil van Dijk - is allowing Liverpool to play at a sustained pace once again. 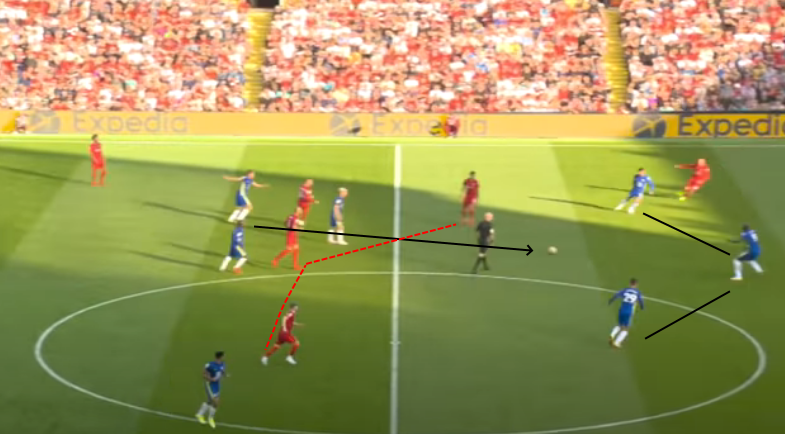 By any measure Manchester United were fortunate to beat Wolves. They were outshot 15 to 10 while Wolves won the xG battle 2.25-0.58; only brilliant goalkeeping from David de Gea prevented a comfortable win for the hosts. The worrying thing for United fans is that, despite winning ugly often being the sign of champions, the problems at Molineaux were exactly the same as those at Southampton the previous weekend.

Can they really mount a title challenge with such a passive central midfield? Ole Gunnar Solskjaer started Paul Pogba alongside Fred and yet even this attacking change did not yield more progressive passes or cohesion in their attacking play, suggesting - once again - that this is a coaching issue as much as anything else.

But there is hope that pure individualism, that moments of magic from elite players like De Gea, Mason Greenwood, and Cristiano Ronaldo, can lift the club through games like these. It's a long shot, but United will need to rely on stealing wins like this one if they are to keep up with Man City, Chelsea, and Liverpool.

Not many Premier League matches are won through the midfield battle these days, such has been the tactical improvements in shape and compression between the lines, but the early kick-off on Saturday bucked the trend. Manchester City were completely dominant through the middle as Bernardo Silva and Ilkay Gundogan cleverly exchanged passes in the half-spaces, while Kyle Walker dipped into central midfield to provide an extra body.

Walker was heavily involved, easily picking up positions unmarked and threading those passes through to Gundogan and Silva to open up the game. The reason was obvious: Arsenal's two-man midfield included Martin Odegaard, who was far too attacking to cover the space, while the Arsenal back three was kept occupied by the Man City forwards. This made the pitch too long, opening up an under-stocked midfield for Pep Guardiola's team to dominate.

This led directly to the first goal and indirectly to the second, as City won a freekick after Silva had been slipped through the lines. The most glaring example yet came for the third, when one simple pass from Ederson saw Gabriel Jesus collect the ball in central midfield with 20 yards of space on all sides. 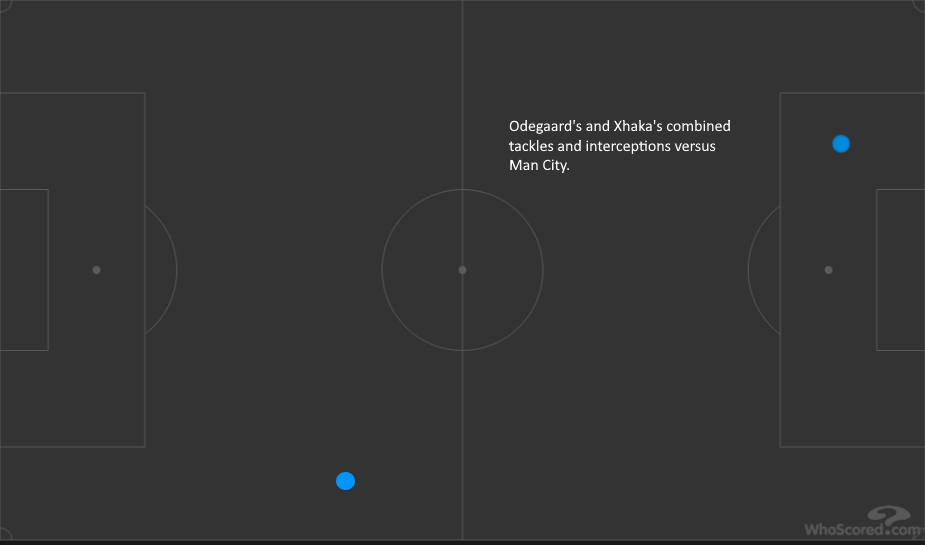 The formation Mikel Arteta chose was a disaster; Granit Xhaka as the only real central midfielder on the pitch and a back three that includes two full-backs was always going to fail. It speaks to the dreadful transfer decisions made at the club that Arsenal should be left in this position, especially with William Saliba having been allowed to leave this summer.

However, in defence of Arteta his intriguing - and incredibly bold - team selection did look good for the first ten minutes as Arsenal pressed high, snapping into challenges and using their unexpected shape (Martin Odegaard advanced to make a front five) to poke holes in the Man City defence. But as soon as they conceded the first goal, thanks to sloppy defending from the hosts' first real attack, they shrank into themselves.

Dropping deep but still looking wide open, the psychological crumbling was indicative of the huge challenge facing Arteta. However complex the tactical plan Arteta writes on the chalkboard, his error-prone players are incapable of enacting it. A disconnect between idea and execution looks fatal.

Nuno Esperito Santo is not unlike Jose Mourinho in his tactical approach. He favours reactive football and a disciplined defensive shape over free-flowing attacking football, with quick breaks and capitalisation on opposition vulnerabilities particularly important. That's what makes his appointment so interesting; Daniel Levy had promised someone who played entertaining football.

So far, Nuno hasn't brought much excitement, although on Sunday it was interesting to see what a Nuno team looks like when forced to dominate the ball. In his first two Premier League games as Tottenham Hotspur manager his team averaged 38% possession, whereas against Watford they held 58% as Xisco's side sat back and invited pressure.

There were plenty of positives for Spurs, who were rarely threatened on the break, and while things were unsurprisingly slow in the final third Spurs did use their full-backs well. Japhet Tanganga and Sergio Reguilon produced three key passes and eight crosses between them, threatening on the overlap having stuck rigidly in the back in the previous two games. 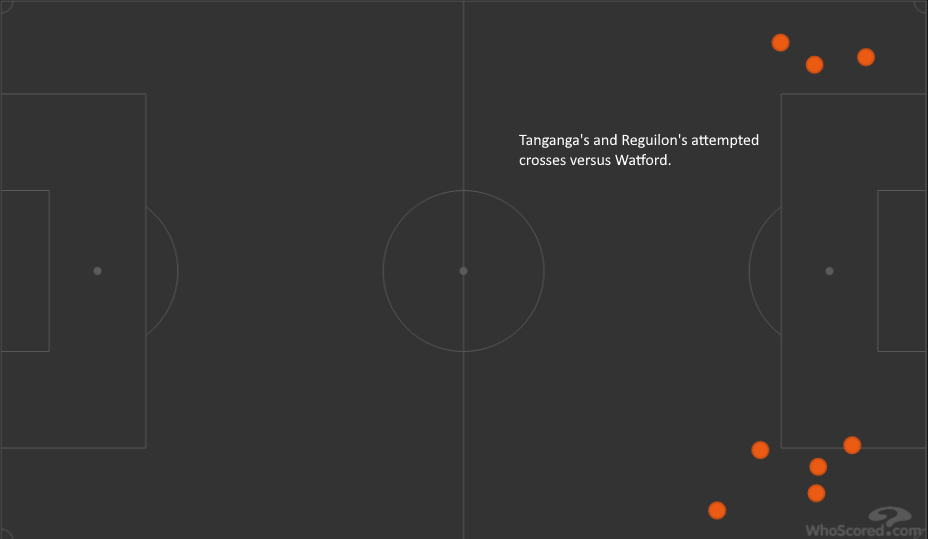