Man Utd close in on Gakpo: 'He will be their player in January'

Erik ten Hag fluffed his tactics and team selection, Trent Alexander-Arnold is being let down by Liverpool teammates and Antonio Conte blew it with Richarlison. Here's five lessons we learned from the past Premier League weekend...

The fundamentals were missing on Sunday afternoon: Manchester United were passive, lacking the ability to get first to the ball or to switch on to the threat. But the basis of this was Erik ten Hag's confused attacking strategy and team selection, which from the very start left his team in the lurch.

United tried to be aggressive from the start, placing their defensive line too high and - with Bruno Fernandes sitting on top of Ilkay Gundogan - expecting to stop Manchester City from passing through them. Within eight minutes they were 1-0 down, the defence had retreated, and they became spectators in the game.

Ten Hag is to blame for his line-up. Playing Anthony was an error because the inexperienced young player didn't know where to stand and therefore failed to pressure Nathan Ake or Joao Cancelo. This allowed City to easily bypass the attacking line, via Cancelo, who could simply release Jack Grealish up against Diogo Dalot – whose second-minute yellow card set the tone in that battle.

But worst of all Ten Hag left Casemiro on the bench and played Christian Eriksen and Scott McTominay in a disastrous two. They had no idea how to control the space against Grealish, City's midfield three, and Haaland. The United manager picked too many attackers to stop City, failed to compress the space with a deep block to make up for it, and failed to change things when it became clear Anthony and Dalot were being torn apart in the opening 30 minutes. 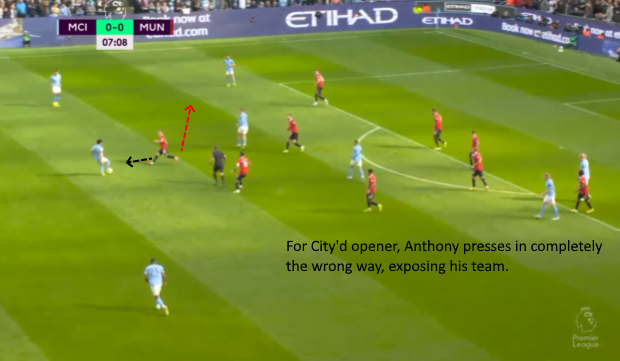 There is nothing left to write about Erling Haaland's extraordinary goalscoring ability, but despite taking the fewest touches (35) of any Man City starter he was actually influential outside the box on Sunday. For arguably the first time in a City shirt, we saw three other features of his play that are going to benefit Pep Guardiola's side this season.

The first, and most interesting, is how his lurking threat is affecting opposition defenders. For each of his three goals Phil Foden found room he was highly unlikely to find without Haaland distracting the United centre-backs, while Ten Hag's initial plan to sit in a midblock fell apart once the United players became scared of Haaland's movement. His speed and power mean opponents are sitting deeper, giving Man City even more possession – and therefore more control.

Second is the incredible assist for Man City's fourth, which showed Haaland is surprisingly good at the things he's supposedly not so good at, which leads to the third, his ability to link the play. The expectation that Haaland will be static, coupled with his incredible ability to ghost unseen into space, means he can occasionally pop up in midfield areas to sew things together. He did this very well against United and will no doubt do this more and more under Guardiola's tutelage. 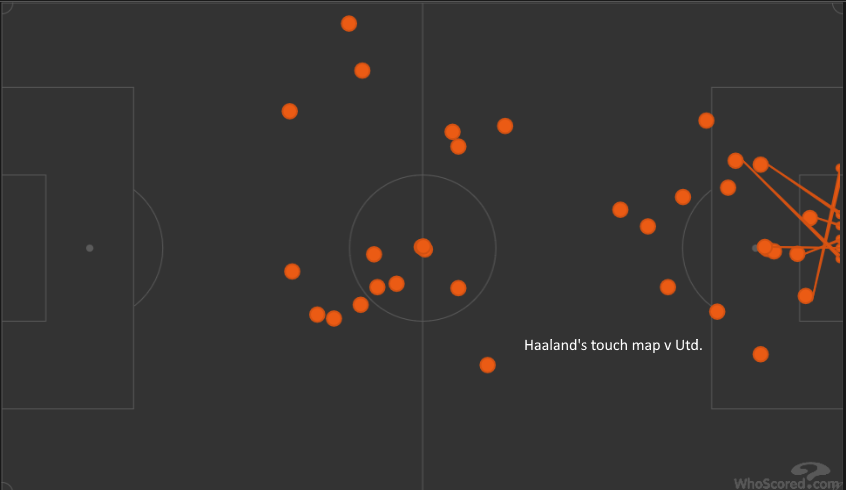 Tottenham Hotspur were blown away by Arsenal at the Emirates, but it could have been a different story. Antonio Conte doesn't want his team to dominate the ball and had Heung-Min Son played better some of Tottenham's first-half counter-attacks may have been successful, switching the narrative. But Arsenal thoroughly deserved their win on balance – and there is a good reason why the Spurs counters were not successful. Conte simply picked the wrong team.

Without the injured Dejan Kulusevski, Tottenham had three forwards who were all sat on the opposition defensive line, meaning they were cut off from a midfield that struggled to release them due to the Arsenal press. It would have made a lot more sense for Conte to pick a 3-5-2 with Yves Bissouma in midfield, because his press evading could have helped Spurs break the first wave of pressure and set Son and Harry Kane away.

More important still, Arsenal's dominance was based on their ability to overwhelm in midfield. Ben White's supportive role assisted the opener, in which Thomas Partey had acres in a midfield space, while Oleksandar Zinchenko's infield position only added to the Arsenal numbers in what became a five-on-two in the midfield battle. Bissouma for Richarlison would have given the visitors a much better chance.

Nottingham Forest continue to play like a bunch of players who've never met each other – which is almost literally true. It turns out that signing 21 players in one summer is slightly too many and Steve Cooper, entirely unfairly, is about to be sacked for failing to bring them together into a cohesive unit.

Then again, he did make errors on Monday night. The spaces between players was far too great against Leicester City, with Cooper's desire to press hard and use an expansive and attacking system only exacerbating the problem of unfamiliarity. What's more, Cheikhou Kouyate and Lewis O'Brien were left all alone in midfield as Morgan Gibbs-White played up front in a kamikaze 4-2-4 formation.

This allowed Leicester to play in their favourite style, rebuilding confidence with some sharp vertical balls through the central column of the pitch to Youri Tielemans, Kiernan Dewsbury-Hall, Harvey Barnes, and James Maddison (these two wingers love to drift into the number ten space). The hosts tore them to shreds with that numerical advantage. 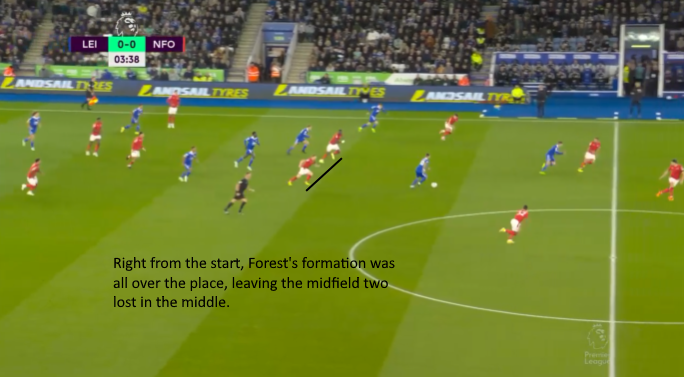 Liverpool's problems continued in a 3-3 draw with Brighton that was defined primarily by new manager Roberto de Zerbi targeting the hosts' right side – something every team is doing these days. Trent Alexander-Arnold made defensive errors for each of the first two Brighton goals and it could have been four or five before Liverpool started to fight back.

Alexander-Arnold needs to improve at some of the basics of defending, but he is not being helped by what is happening in front of him. Liverpool's press has waned from the front, exposing his position more often; the loss of Georgino Wijnaldum means Jurgen Klopp's side aren't controlling the game as much as they used to; and the midfield isn't covering the space in front of Alexander-Arnold as effectively.

There are numerous errors that have seen the whole system start to disintegrate, and as that happens it is no wonder opposing teams are focusing their energy on getting at Alexander-Arnold.