The question that hangs over Ole Gunnar Solskjaer is whether a weakness in central midfield - both in preventing counter-attacks and constructing meaningful possession - can be masked by the sheer talent in the Manchester United attack. Cristiano Ronaldo's debut seemed to give evidence to both sides of the argument.

On the one hand, his two goals grabbed a tricky game by the scruff of the neck, suggesting United's general inability to break down a deep-lying defence with structured possession may not matter with a force of nature winning matches on his own. On the other hand, Man Utd were still frequently countered by Newcastle and Steve Bruce's side were often just one mistimed pass away from scoring an easy goal on the break.

The defensive side of things may continue to be a problem, undermining their chances of a title challenge, but there is an interesting tactical note from the game that gives Solskjaer cause for optimism. In the first half especially, Ronaldo regularly dropped into space between the lines and demanded an early vertical pass from the centre-backs - who, given Ronaldo's ego and influence, naturally obliged.

Perhaps his forceful nature will up the team's tempo and create more direct, progressive passing through midfield without detailed tactical instruction from the dugout. Solskjaer's is a team built on good vibes, on hoping that allusions to the Fergie era will lead them to attack in improvised waves and build momentum the old-fashioned way. Ronaldo is the perfect player for that. 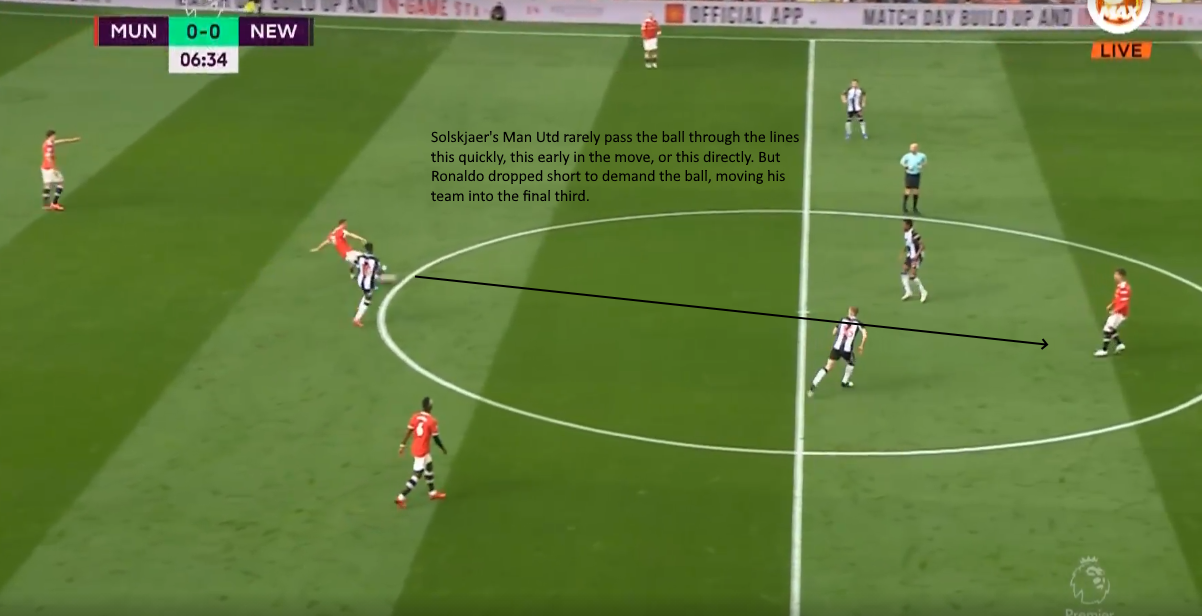 There was always the sense Tottenham were riding their luck in the first few games of the new Premier League season and their 3-0 defeat to Crystal Palace on Saturday was confirmation. Nuno Esperito Santo managed one of the worst Spurs performances in living memory, his team recording a risible 0.08xG as Harry Kane failed to record a shot on goal for the first time in his career. The problems were many, but can be summarised as a lack of idea in how to pass the ball through the lines.

The first issue was Nuno's strangely lopsided 4-3-3 formation, in which Dele Alli - nominally the left winger - spent the game drifting behind Kane. That meant Spurs had no left flank to speak of, limiting their width and their options to move around the compact Palace midfield while making their passing options too limited. But the issue ran deeper, as Piere-Emile Hojbjerg and Harry Winks struggled to move forward on the ball or find a progressive pass.

Palace deserve credit for their confrontational pressing through midfield, a sign of how Patrick Vieira is changing the team, but Spurs should not have found it so difficult. Worryingly, Spurs rank bottom of the league for progressive passes (48.39 per match), a WyScout metric that measures "a forward pass that attempts to advance a team significantly closer to the opponent's goal". Nuno needs to do lots of work in training to improve on their attack construction, although reintroducing Giovani Lo Celso and Tanguy Ndombele to midfield would also help.

3) Arteta's switch to 4-3-3 provides some optimism

Arsenal did improve on their poor start to the season and while a 1-0 victory over Norwich City is hardly cause for celebration there were some important green shoots in the game, especially in the second half once Mikel Arteta switched to a 4-3-3. Ever since he joined the club Arteta has said he wants to play in a 4-3-3 but hasn't had the personnel, but after a decent summer in the transfer window the squad is now in his image. It's time to use this formation more regularly.

For the final half hour he moved from 4-2-3-1 to a 4-3-3 in the style of Pep Guardiola's Manchester City, with two free eights Emile Smith Rowe and Martin Odegaard roaming ahead of Thomas Partey. The dual playmakers looked dangerous as the Norwich midfield began to get overrun, and despite the tight scoreline Arsenal were dominant - amassing 14 shots on goal in that half hour, almost half of their total (30).

Five new signings in the starting 11 gave Arsenal a new feel, too, with a back four that actually had players in their best positions; Gabriel and Ben White could form a strong centre-back partnership and Aaron Ramsdale enjoyed a clean sheet on his home debut. Now in the right formation and with the right players to enact his tactics, perhaps Arteta's detailed coaching will finally see things click into place. 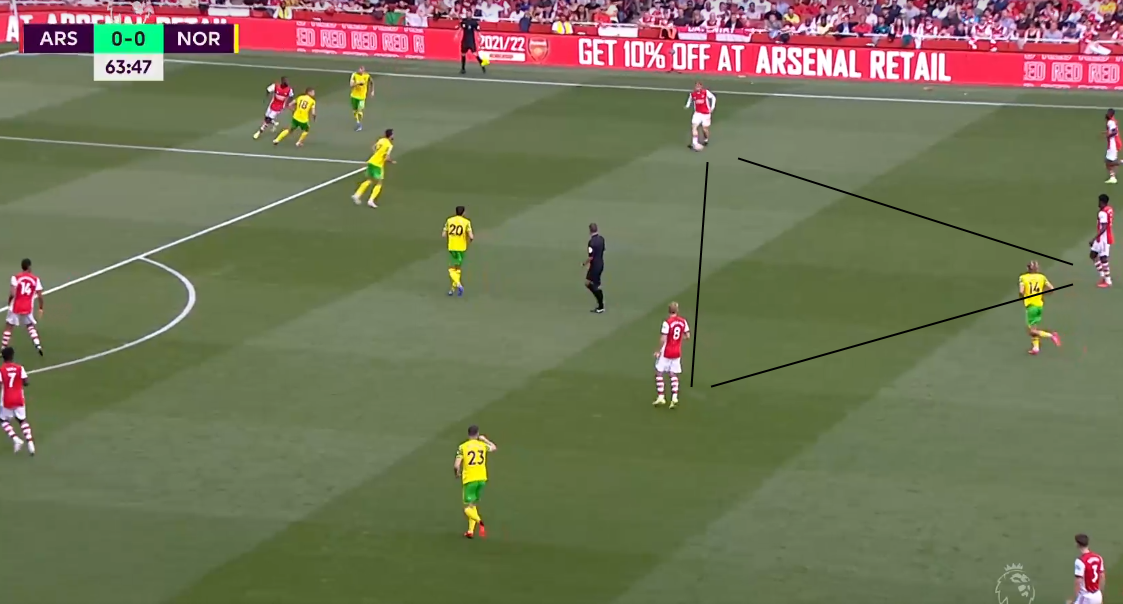 Liverpool knew exactly how to beat Leeds United. Jurgen Klopp used the same method as in the 4-3 win and unfortunate 1-1 draw last season to overcome Marcelo Bielsa, whose man-to-man marking system makes Leeds highly vulnerable to direct attackers like Liverpool's front three. The basic idea is simple enough: make plenty of unpredictable runs, unexpected dips into the middle, and the Leeds defenders are pulled all over the place.

Sadio Mane was particularly effective at coming central to receive the ball, before sharply turning his man and sprinting behind on the break. Leeds simply could not cope, especially because they tend to empty central midfield when launching their own attack (hence Mane's instruction to move into the spaces left open). Mane and Mohamed Salah continually rolled the defender in their one-on-ones, as well as making dummy runs - feigning to go one way, then turning the other - to cause mayhem as the Leeds defenders followed them closely.

The opening goal exemplified the problem with Bielsa's man-to-man system; his players went tight to their man, as the below image showed, rather than stick to a zone of the pitch. This allowed Joel Matip to run forward without any resistance, creating the space for the opener. 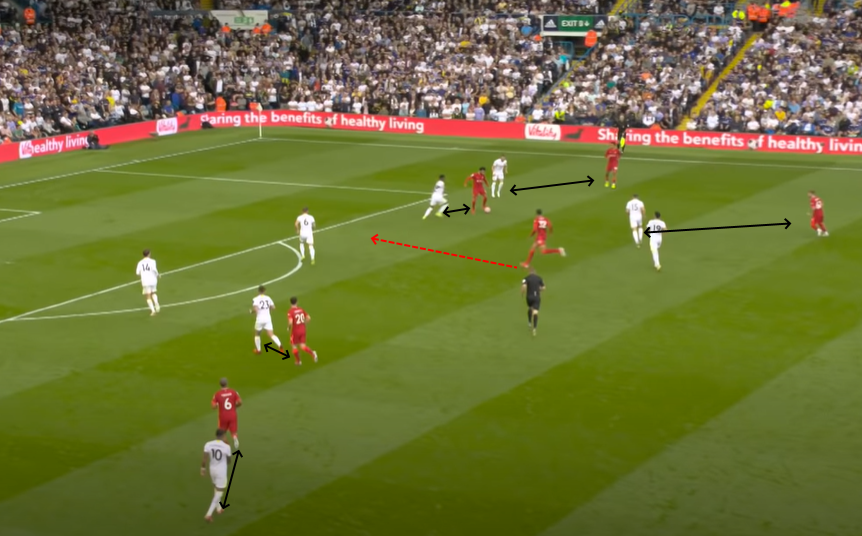 Rafael Benitez has made a superb start at Everton, showing the value in micro-management and paying very close attention to the tactical details of the opposition. Unlike his predecessor Carlo Ancelotti, who manages in broad strokes, Benitez seeks to control all the variables - adapting his approach for each new challenge. So far, Everton's players are taking very well to his strict methods.

Everton started the game in a 3-4-3 - the fourth distinct formation of his tenure already - but switched on the hour mark to a 4-3-3 with the introduction of Andre Gomes for Ben Godrey on 61 minutes, immediately after their equaliser. Benitez, sticking to his decision despite that goal, was rewarded with another two in quick succession, both scored from quick breaks as the extra attacking body caused panic in the Burnley ranks.