Cristiano Ronaldo's stunning hat-trick was an example of what Manchester United thought they had signed last summer; a slightly flawed modern striker capable of these moments of brilliance that will win games single-handedly.

In an otherwise lacklustre performance, United were defined by awkwardness in possession as Antonio Conte successfully slowed the hosts down. He knew Ralf Rangnick had little interested in holding the ball and wants his team to play in the transition, which is why Conte ensured his Tottenham Hotspur team sat even deeper than usual, inviting Man Utd to break them down.

For the most part United could not, although while Ronaldo takes the headlines for his goals Rangnick did subtly swing the game in the hosts' favour. First he took a risk by substituting Nemanja Matic for Edinson Cavani and switching from 4-3-2-1 to 4-2-4, a move that led directly to the winner amid Spurs confusion.

With Paul Pogba now in a deeper role, his pass set United away in the build-up to the match-winning corner because now both Cavani and Ronaldo were making runs on the shoulder of the last defender. It dragged Spurs back, swung the momentum, and opened a route for Pogba's more direct route to goal.

As soon as it went in Rangnick made another bold move by subbing Ronaldo and moving to a back three to see out the game. His overall influence on this team might be minimal, but Rangnick has shown he can still make the difference with in-game calls. 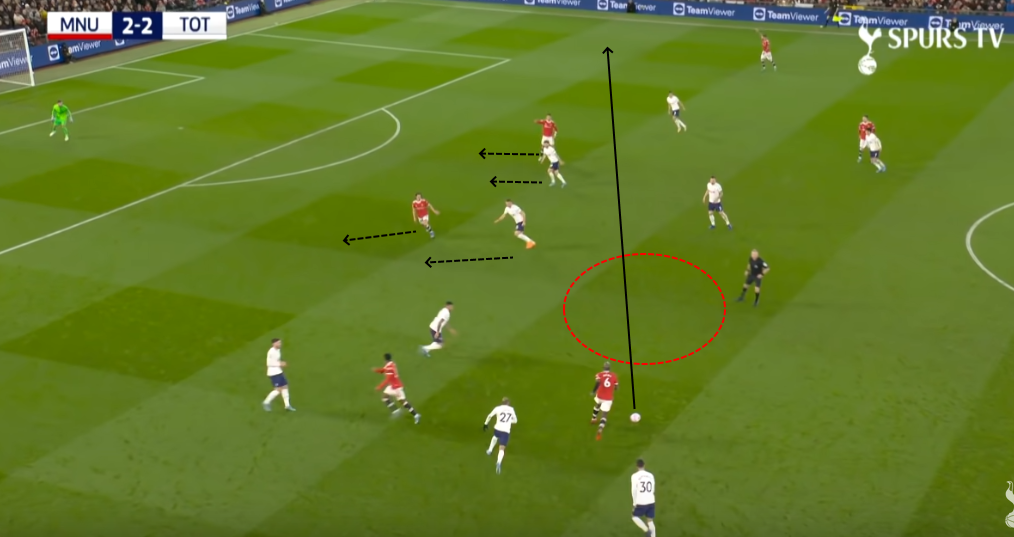 The Monday night game at Selhurst Park went exactly as expected in terms of the tactical battle, and although Crystal Palace ultimately got lucky – Manchester City missed three or four sitters – they earned their point with a powerful defensive performance. In keeping with Patrick Vieira's philosophy his team refused to drop too deep, preferring to compress the space from a good ten yards higher than many teams dare.

This was the right decision firstly because it allowed Palace to show aggression in the challenge as they pinched the ball to launch counters - or at least to break up the rhythm of Man City's possession. Secondly, with nobody making runs in behind for City, there was no particular concern with being a little higher than usual.

It is a problem Man City have had all season. They have no real striker to make those movements into the penalty area while Guardiola has loaded his team with between-the-line wingers, losing the likes of Leroy Sane and Ferran Torres and replacing them with Jack Grealish – who was very poor again here.

But what ultimately decided the game was Vieira's early double substitution, freshening legs in the final third, and Guardiola's bizarre decision not to. He could have brought Raheem Sterling and Gabriel Jesus off the bench to make more direct movements, but instead he made it easy for Palace to keep doing what they had been all game.

Aston Villa's 2-1 defeat to West Ham United was one of the strangest games of the season. For most of the match it genuinely looked like neither team wanted to score a goal, mainly because Villa had most of the possession and were attempting a tactic that was never going to pay off.

Steven Gerrard should have known better than to instruct his players to pass the ball slowly between themselves at the back in order to draw West Ham forward and create space for their usual incisive, transitional football. The Hammers would never fall for that, and indeed remained deep throughout. We cannot know for certain Gerrard aimed to do this, but there is no other logical explanation for the way players would pass the ball between each other five or six times, under no pressure.

The second error Gerrard made was persisting with his ultra-narrow diamond 4-4-2, even though he knew West Ham would be compact. Inevitably David Moyes' team won the midfield battle as Declan Rice and Tomas Soucek suffocated Philippe Coutinho, and while the introduction of Leon Bailey helped it came too late. Villa should have started with wingers to stretch Moyes's shell. 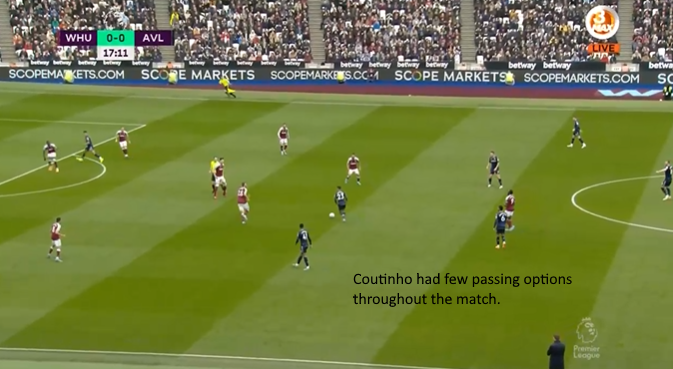 Frank Lampard's Everton already look alarmingly like Frank Lampard's Chelsea, which is to say they are passive between the lines, hesitant and holey in the press, and particularly vulnerable at being attacked through central midfield. Clearly Bruno Lage had anticipated this, hence the unexpected formation switch from 3-4-3 to 3-5-2.

The latter is ordinarily reserved for games when Wolves expect to be dominated by the much stronger side, but here Lage used it to give him a three on two against this wafting, rudderless Everton midfield. Sure enough, they were dominant in this area, even managing the rare feat of holding the majority of possession (62%).

It is getting increasingly difficult to see where Everton are going to pick up points. The return of Dominic Calvert-Lewin has done nothing to steady the ship, while Lampard has overseen six defeats from his seven Premier League games in charge. Any hope of a new manager bounce is gone and, somehow, Lampard has managed to change absolutely nothing at the club despite having the opposite tactical identity to his predecessor Rafael Benitez.

In a continuation of last week's theme, the emergence of Christian Eriksen and the return from injury of Ivan Toney has radically altered the trajectory of Brentford's season; Thomas Frank's side looked neat and tidy throughout their poor run but simply lacked a magic spark and a strike partner for Bryan Mbeumo.

For the second week running Eriksen and Toney were the difference. The Denmark international provided the assist for Toney's first and it was an exchange of passes between these two that led to the penalty. Brentford, only needing six or seven points from their final nine games, are surely safe now – although this is not the end of their worries.

They will struggle to keep hold of Eriksen or Toney this summer, suggesting a substantial rebuild will be needed for Brentford to survive their second season in the top flight.