By half-time at the London Stadium it looked as though the defining tactical feature of this game would be Manuel Lanzini's positional errors. West Ham United started in a 5-3-2 with Lanzini on the left of central midfield, but around the half-hour mark he started to push higher up the pitch to leave Declan Rice and Tomas Soucek overwhelmed.

Reece James began to dominate in these pockets of space where Lanzini should have been and Thomas Tuchel, noticing the gaps on the outside of West Ham's midfield, swapped the dangerous Mason Mount over to that side to help James crank up the pressure. One of James's dribbles through this area won the corner for Chelsea's first goal, before Mount scored by popping up on the right side.

However, David Moyes noticed where the game was being won and lost and brought Arthur Masuaku on for the second half to push up and meet James (something Ben Johnson seemed too timid to do, giving West Ham a flat back five). What's more, Lanzini was clearly told to stay in his base position, stabilising the game and indirectly leading to the hosts' equaliser.

But the tactical drama didn't stop there. Surprisingly, with 20 minutes remaining Moyes replaced Kurt Zouma for Pablo Fornals and put the attacker into midfield with Rice dropping back, then with five on the clock Said Benrahma came on to make a 3-4-2-1 with just Fornals and Soucek holding down the middle.

It was a bold attacking move that paid off when Masuaku, aggressive as ever, pushed forward and scored the winning goal.

The idea was control through high pressure, a central tenet of the Ralph Rangnick tactical philosophy and it was already on display at the weekend. Crystal Palace were forced back for long periods as Manchester United pressed hard and attacked in vertical lines, always trying to feed a forward pass that would help them control the ball deep in the Palace half.

This helped their defensive side of things, in that the ball remained far from goal and the high pressing prevented United from getting caught by counter-attacks, and the most intriguing aspect of this was how Rangnick used Cristiano Ronaldo. "Chapeau," the manager said of his forward's work off the ball, but what really helped was deploying a 4-2-2-2 with Marcus Rashford up front with Ronaldo.

Using two together took some pressure off the number seven, plus it meant a more energetic player could set the tone for Ronaldo to follow. Elsewhere, the high-energy approach and emphasis on verticality clearly helped Fred, who is much better when working at speed in the opposition half, while the use of a narrow 4-2-2-2 meant a lot of United's attacks ended in a crossing opportunity for an unmarked full-back. This is an area they will need to upgrade.

On the flip side, things were less ordered in the second half and Crystal Palace had opportunities to come back into the game, a sign of United's inability to sustain such demanding tactics for a full 90 minutes. Improving fitness will be a high priority for Rangnick. 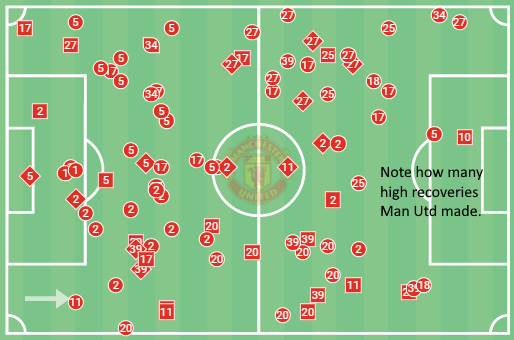 This was another meek performance from Norwich City, who are arguably playing prettier football under Dean Smith but lack any kind of edge; just like against Newcastle in midweek, Norwich were toothless, lacking any obvious attacking intent and seemingly happy to play graceful short passes in harmless midfield areas. It's almost as if Norwich are stuck in the Swansea-era days of tiki-taka for the sake of it, and it will no doubt end in relegation.

Antonio Conte's project hasn't really got started yet, and once again Harry Kane looked off the pace on Sunday, but there was one area in which we started to see something of the Conte vision come together. In his famous 3-4-2-1, Lucas Moura and Heung-Min Son seemed to enjoy taking up narrow positions just behind Kane.

On the rare occasions Spurs were able to get the ball forward quickly, as Conte demands, Lucas and Son danced cleverly in the spaces between Norwich's defensive and midfield lines. Lucas's spectacular opening goal was the best example of this, and although better teams would shut down those areas, the new manager will be pleased to see Son and Lucas link up so well in these crucial Conte positions. 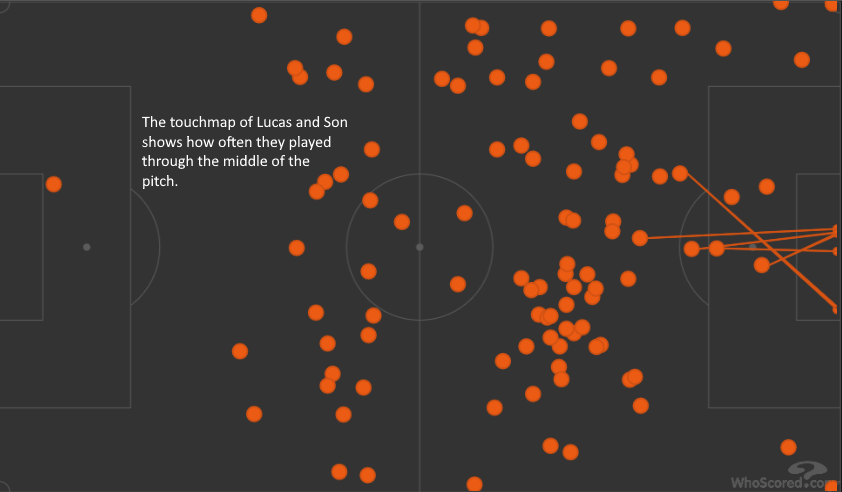 Aston Villa's success with set-pieces under new coach Austin McPhee and Leicester City's problem defending them - Villa have scored the second most (7) in the league and Leicester have conceded the second most (9) – was always going to play a big part in this game. Ultimately two Ezri Konsa goals from corners was the difference in a tense and open game that could probably have swung either way.

However, from a tactical perspective Steven Gerrard deserved his win for tweaking his system in the second half after Leicester had applied lots of pressure in the first. Villa's narrow 4-3-3 when off the ball was leaving too much space out wide for Leicester's wing-backs to get possession and push the hosts back, and after the break Villa more consistently dropped into a flat 4-5-1 to shut down the wings.

Late in the game Gerrard took a risk by moving to a 5-3-2, which handed Leicester the vast majority of the ball but ultimately proved to be the right call.

Everton have looked far too soft in central midfield throughout this campaign and yet Rafael Benitez has stubbornly stuck to a 4-4-2 formation, allowing his team to be overrun through the middle while limiting his side's options to build possession through the centre of the park. Finally, he changed that on Monday night with the 66th minute substitution of Andros Townsend for Andre Gomes.

That extra body in the middle gave Everton some control after another worryingly meek performance, and as Arsenal began to withdraw into themselves – as they so often do – having another outlet through the middle ensured the hosts could start to dominate territory and win the second balls.

It was Gomes, open in the middle, who recycled the ball around before Demarai Gray's shot hit the bar and Richarlison headed in the rebound. Then it was Gomes seizing possession in a chaotic moment of transition, and dribbling past two players, that released Gray to score the winner.