Pep Guardiola knew that Ole Gunnar Solskjaer was going to repeat the plan he used to beat Tottenham Hotspur last weekend and came up with a detailed counter-plan to dismantle it. It was the most obvious example yet of why the Manchester United manager is hopelessly off the pace; his simple strategy was undone by the complexity and intelligence of his opposite number.

Guardiola deployed Phil Foden and Gabriel Jesus as very wide wingers whose chief function was to pin the United wing-backs, creating a flat 5-3-2 in which space would open up on the outsides of the United midfield. Kevin de Bruyne and Ilkay Gundogan sat unusually high as free eights while Bernardo Silva dropped as a false nine to create a narrow line of three, drifting in front of confused United centre-backs who had nobody to mark.

From here, De Bruyne would ghost out into that right-hand pocket to whip crosses into the box and Joao Cancelo would arrive late in a move on the opposite side. It ensured United were outnumbered on the flanks and unable to cope with the sheer number of bodies in the number ten area, where that line of three overwhelmed Fred and Scott McTominay. Finally, Kyle Walker formed a back three to give City recovery speed against Cristiano Ronaldo-led counter-attacks.

It was a tactical masterclass that ground Man Utd into the dust within 45 minutes. 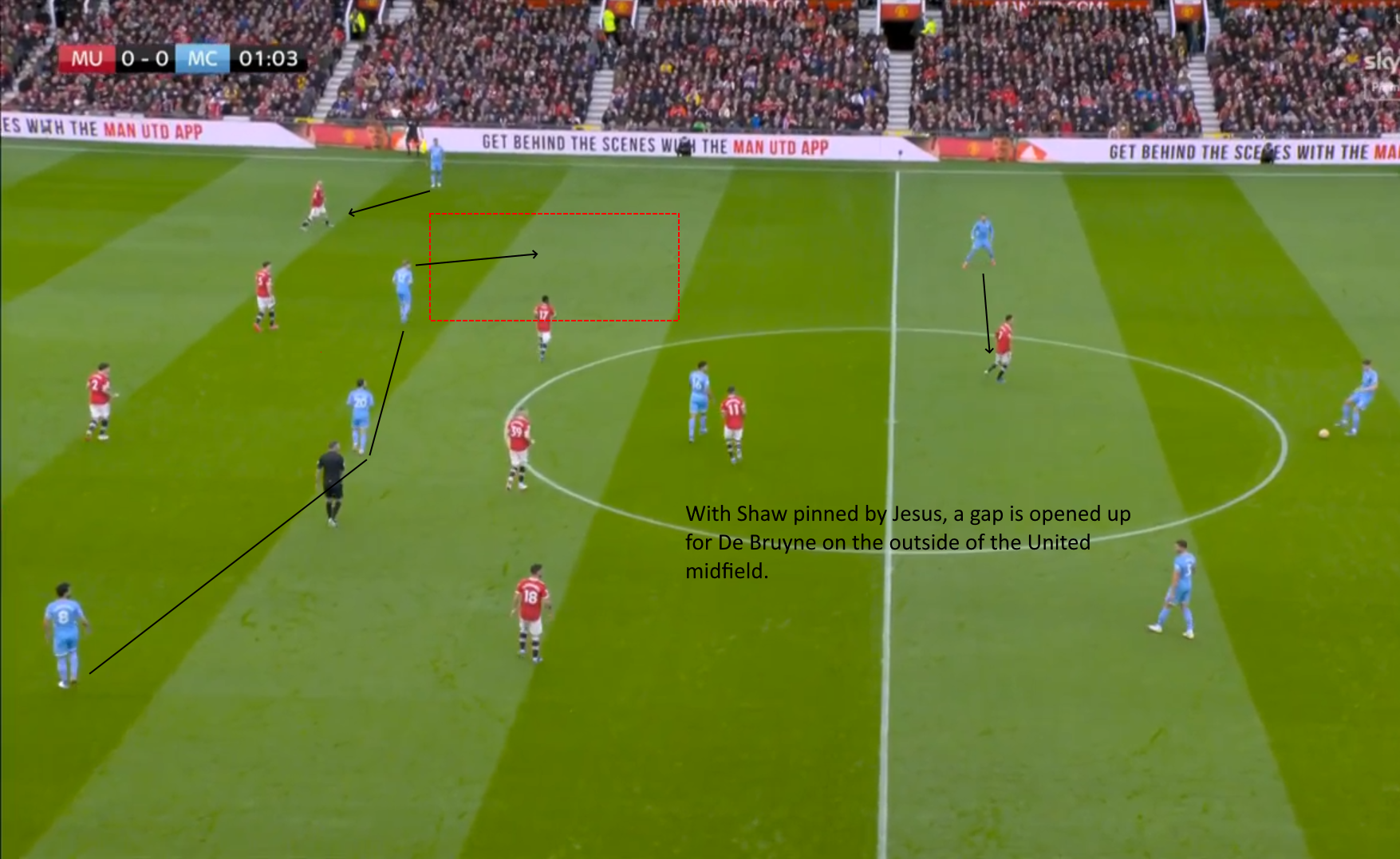 Dean Smith has left Aston Villa not because they have lost five consecutive league games but because the team have consistently looked disordered – lacking in a detailed plan – whenever Jack Grealish is absent. Against Southampton, who have a very clear and meticulously coached way of playing under reported Villa target Ralph Hasenhuttl, the tactical problems under Smith came to a head.

Southampton's narrow 4-2-2-2 always creates neat passing options through the middle of the pitch because those wingers and fowards align to create a hexagonal shape in the transition, and the disorganisation in Villa's midfield allowed them to ease through on Friday evening. The main problem was that Villa pressed as individuals, making erratic decisions to close down that left too much space for the likes of James Ward-Prowse to dominate the game.

John McGinn was the main culprit, as the image below shows, and when he stepped out – leaving Marvelous Nakamba with several players to mark – Villa were then cut apart by Kyle Walker-Peters, who overlapped consistently to take advantage of Leon Bailey's failure to track back. Things improved for Villa in the second half when Smith moved Emiliano Buendia out to the right, but the damage had been done.

Villa must now appoint a modern tactician who can provide more calculated instructions to the team. 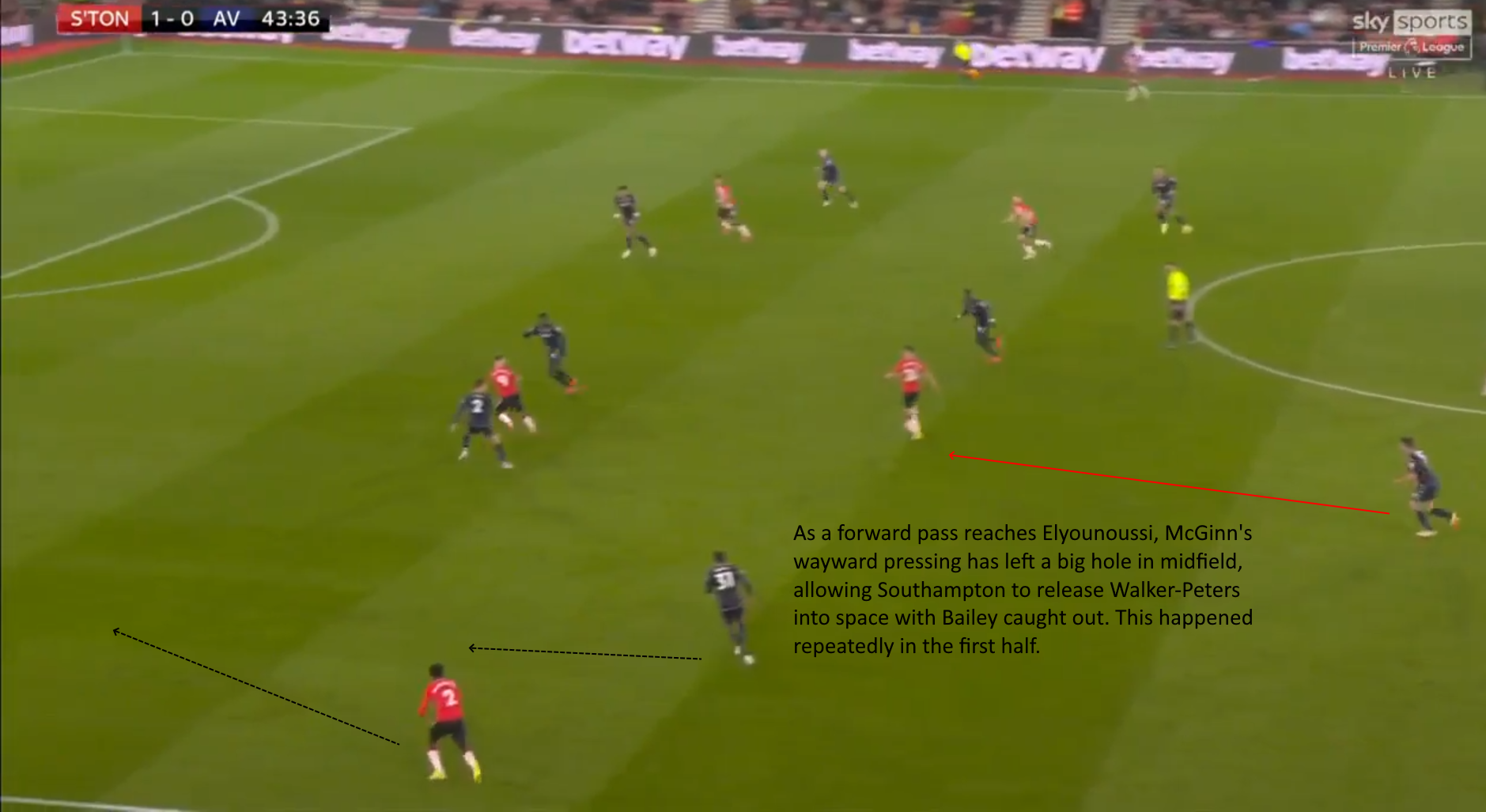 There was nothing new here, just the same West Ham United deploying exactly the same tactical setup as they have done throughout David Moyes' tenure. The secret to their success is consistency and simplicity, and Jurgen Klopp really ought to have done more to fight against the hosts' set-piece dominance and ability to counter-attack.

The first goal saw a long ball from Pablo Fornals find Michail Antonio in the channel, leading to a corner from which West Ham scored. Their second goal was a counter, led by Jarrod Bowen and Fornals, that tore behind Liverpool's high defensive line, and the third was another corner goal from a quick break. It was three counters, all predictable in source and direction.

Klopp should have expected this, giving Fabinho extra support in central midfield to shut down the breaks at source. The Brazilian was unable to get close to Fornals for the second goal, with Liverpool putting too many bodies ahead of the ball and asking too much of Virgil van Dijk and Joel Matip together.

It was a rare lapse in tactical concentration from the Liverpool manager that could prove costly come May, although perhaps he simply would have expected his players to be more energetic on the night. They did not counter-press very well, as the image below illustrates: 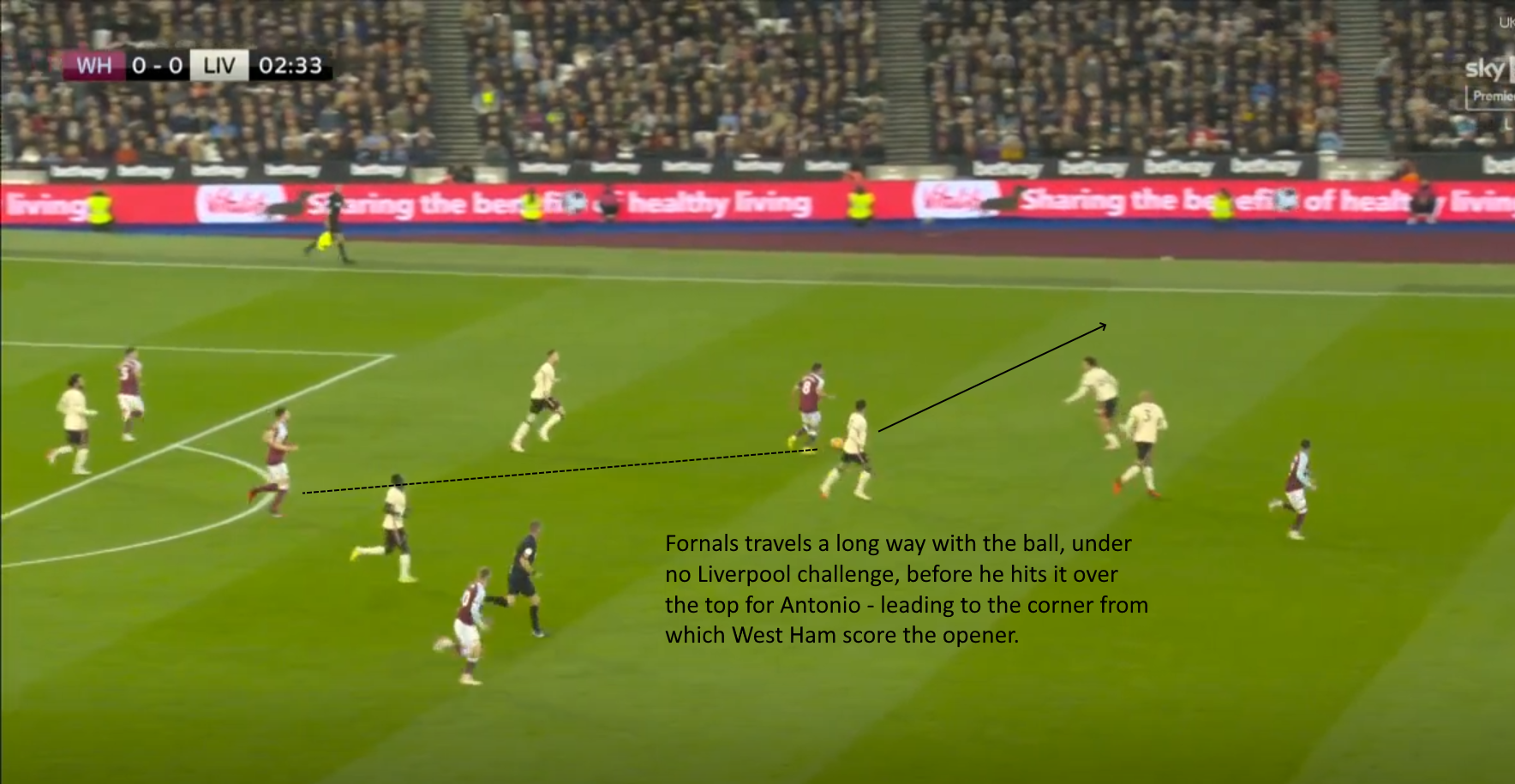 It was no surprise that Antonio Conte immediately installed his favourite 3-4-3 formation at Tottenham Hotspur, and equally we should not be surprised that it looked a little clumsy. It takes a long time for Conte's complex tactical strategy to come together and it will be many weeks before his exacting positional and passing instructions lead to sharp, one-touch football through the lines.

Consequently, in the mean time Conte needs to make use of the new-manager bounce; of the excitement running through the club following his appointment last week. Perhaps, having never previously taken a job mid-season, Conte isn't fully aware of this phenomenon. That is the best explanation we have for why he chose to play the same 11 that started in the Europa Conference League on Thursday.

The Spurs players looked leggy, clearly exhausted by that European trip and unable to ride the confidence boost of the last few days. If Conte had simply made changes, letting his players off the leash and instructing them to impress him, then Tottenham would have been able to overwhelm a passive and low-on-confidence Everton side.

Donny van Beek was inexplicably thrown into the fire on Saturday, handed a pointless ten-minute cameo at the end of a traumatic game for Manchester United. As a young player in a new country, he is being treated unkindly by Solskjaer and this is just the latest example, but what makes it particularly strange is that the team repeatedly look so weak in central midfield. Surely Van de Beek is worth a go?

His continued exlusion is starting to make Solskjaer's position weaker. At Old Trafford they sang the Dutchman's name in the second half, then when he came on they gave pantomine reactions to his touches, most notably ironically cheering a pirouette Van de Beek performed in the middle of the pitch. When the supporters start laughing at the absurdity of the situation, you know the manager is in trouble.